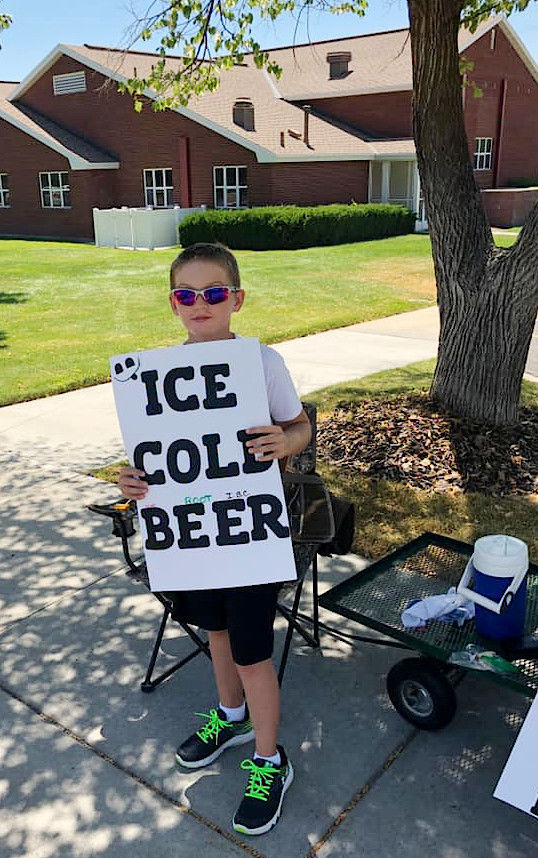 ABOVE: A boy holds a sign advertising “ICE COLD (root) BEER” in the area of 600 South and 200 East in Brigham City, Utah.

ABOVE: A boy holds a sign advertising “ICE COLD (root) BEER” in the area of 600 South and 200 East in Brigham City, Utah.

Several Brigham City residents contacted police this week to report a child with a sign advertising “ICE COLD BEER” in large black letters on a street corner in front of a church.

By way of update, the Brigham City Police Department posted a picture of the boy to its Facebook page on Tuesday, where — if you zoom in a bit — the word “ROOT” is written in tiny letters above “BEER.”

“His marketing strategy has resulted in several calls to the BCPD,” the department’s post states, “but apparently its paid off as business has been good.”

“He’s adorable!” Jamie Lee Ammons Jensen commented. “It shocked me too, and I bought root beer from him. What a smart kid.”

As a side note, in 2017 Utah passed a “lemonade stand” bill barring cities from requiring licenses for home-based businesses run by minors.

So if “ICE COLD (root) BEER” comes to your neighborhood, you may save your local police department some trouble if you reach for your wallet instead of your phone.