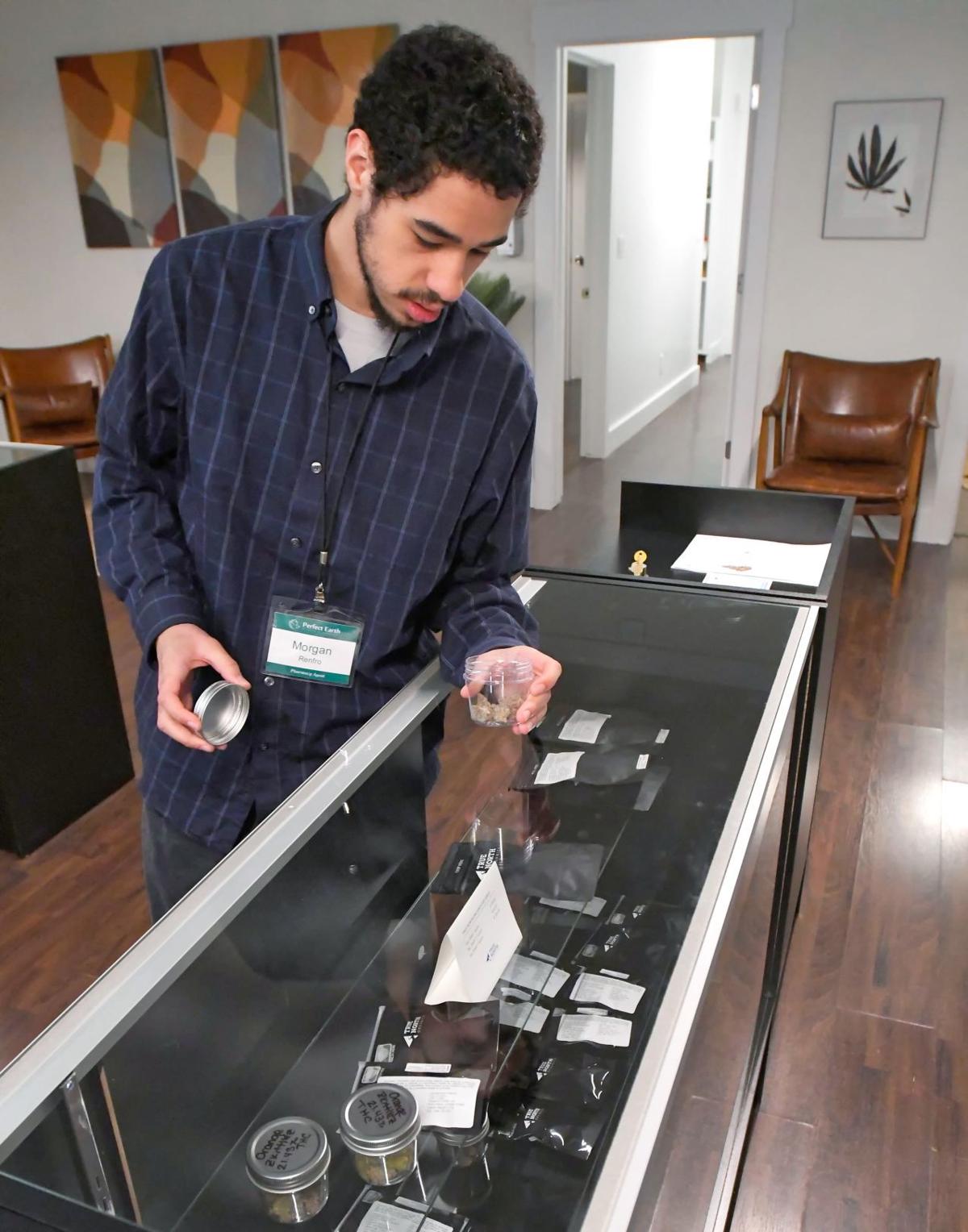 Morgan Renfro gets a jar of medical cannabis out of the case at Perfect Earth Modern Apothecary in North Logan on Thursday. 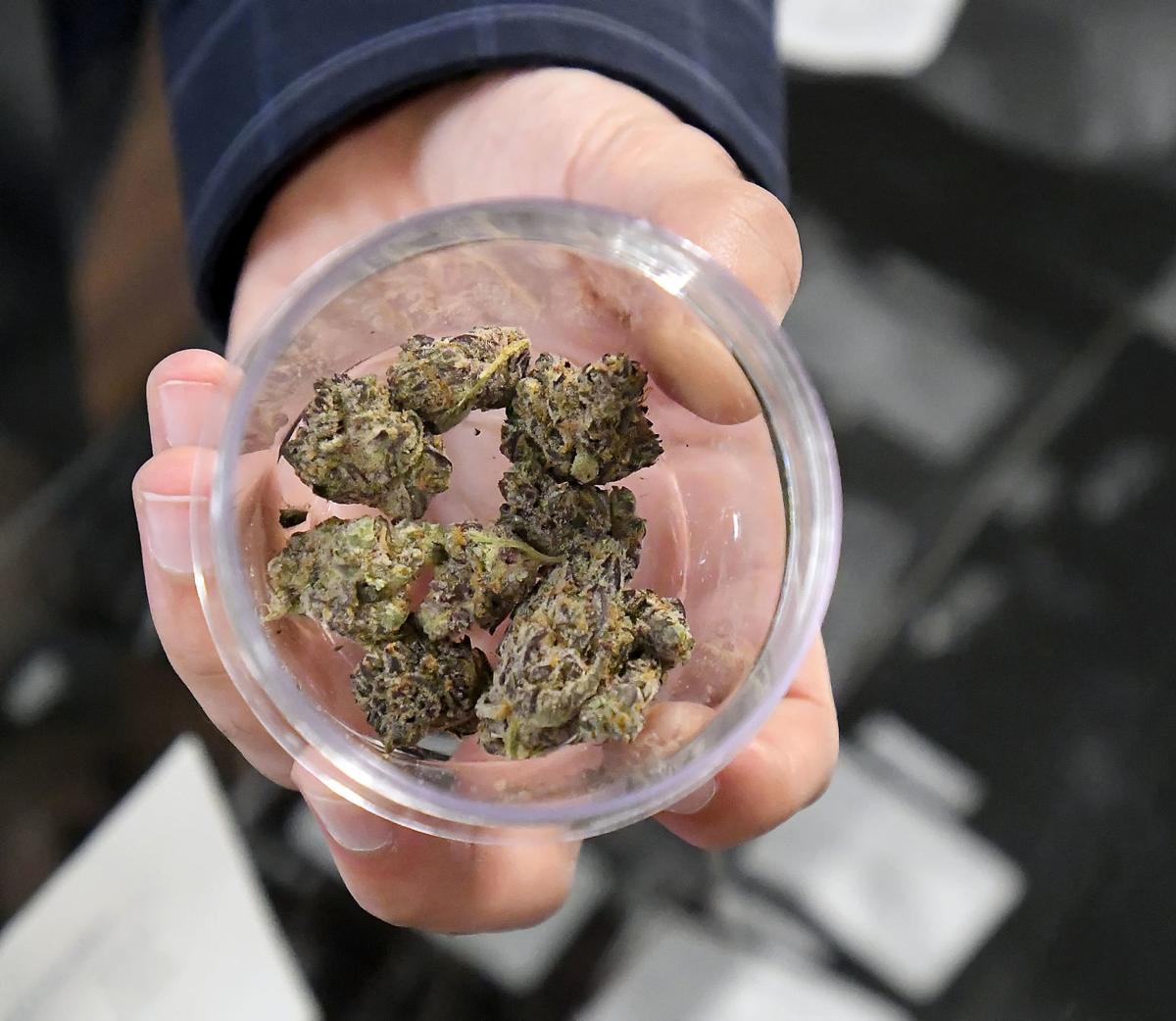 Morgan Renfro gets a jar of Karat Cake at Perfect Earth Modern Apothecary in North Logan on Thursday.

Morgan Renfro gets a jar of medical cannabis out of the case at Perfect Earth Modern Apothecary in North Logan on Thursday.

Morgan Renfro gets a jar of Karat Cake at Perfect Earth Modern Apothecary in North Logan on Thursday.

Cache Valley’s first medical cannabis pharmacy did a “soft opening” on Wednesday in response to COVID-19.

For its first day of business, Perfect Earth Modern Apothecary in North Logan began accepting patient letters and medical cards by appointment only. Beginning April 2, however, the pharmacy opened to the public with no appointment required. The apothecary is the second medical cannabis pharmacy to be opened in the state of Utah.

Mike Standlee, the CEO of True North Organics and Perfect Earth Modern Apothecary, said the pharmacy saw 11 patients in the first hour and saw steady business throughout the day.

“Between the state and my wonderful group of people, everybody’s been great to work with,” Standlee said. “It’s gone really smooth.”

Standlee said the decision to do a soft opening came nearly three weeks ago in response to the stresses and turmoil created by the COVID-19 pandemic.

A grand opening for the pharmacy had initially been scheduled for April 1, Standlee said, but it has since been postponed an estimated 30 to 60 days.

“We will be holding a large grand opening celebration once the COVID-19 social distancing is no longer required,” Standlee said in a press release. “In the meantime, we are extremely excited to serve patients across Utah within the recommended social distancing parameters. We have taken great care to build and design a world-class pharmacy where patients can feel comfortable getting the medicine they need.”

True North of Utah holds two pharmacy licenses — one in Cache Valley and one in Ogden to be opened later this month — and a cultivation license in Utah. Standlee said his business was one of eight to be awarded a cultivation license. True North of Utah has since purchased a 30-acre site in Brigham City where they will build 100,000 square feet of greenhouse space, corporate offices and an extraction lab. Standlee said construction is expected to begin in two weeks, and the first greenhouse is projected to be complete in around 50 days.

A self-described “farm boy,” Standlee grew up in Twin Falls, Idaho, and started Standlee Premium Western Forage in the 1980s. Standlee said he began studying marijuana and seeing how others could benefit from using it.

“I was a person, years ago, that was totally against it,” Standlee said.

Even though there’s been a lot of red tape, Standlee said the process of opening in Utah has been very positive.

“As complicated as this is,” Standlee said, “I’ve had more people just pouring everything they’ve got … to get it right and want it to succeed — it’s been a great experience.”

Patients must first consult their physician and obtain a medical card or a recommendation letter. According to the Utah Medical Cannabis Act, medical cards are given to individuals with a qualifying condition. Qualifying conditions include cancer, Crohn’s disease, Alzheimer’s disease, post-traumatic stress disorder, epilepsy or debilitating seizures among others specified by state law.

For Step by step instructions on how to obtain a card or letter, visit the https://medicalcannabis.utah.gov/patients/.