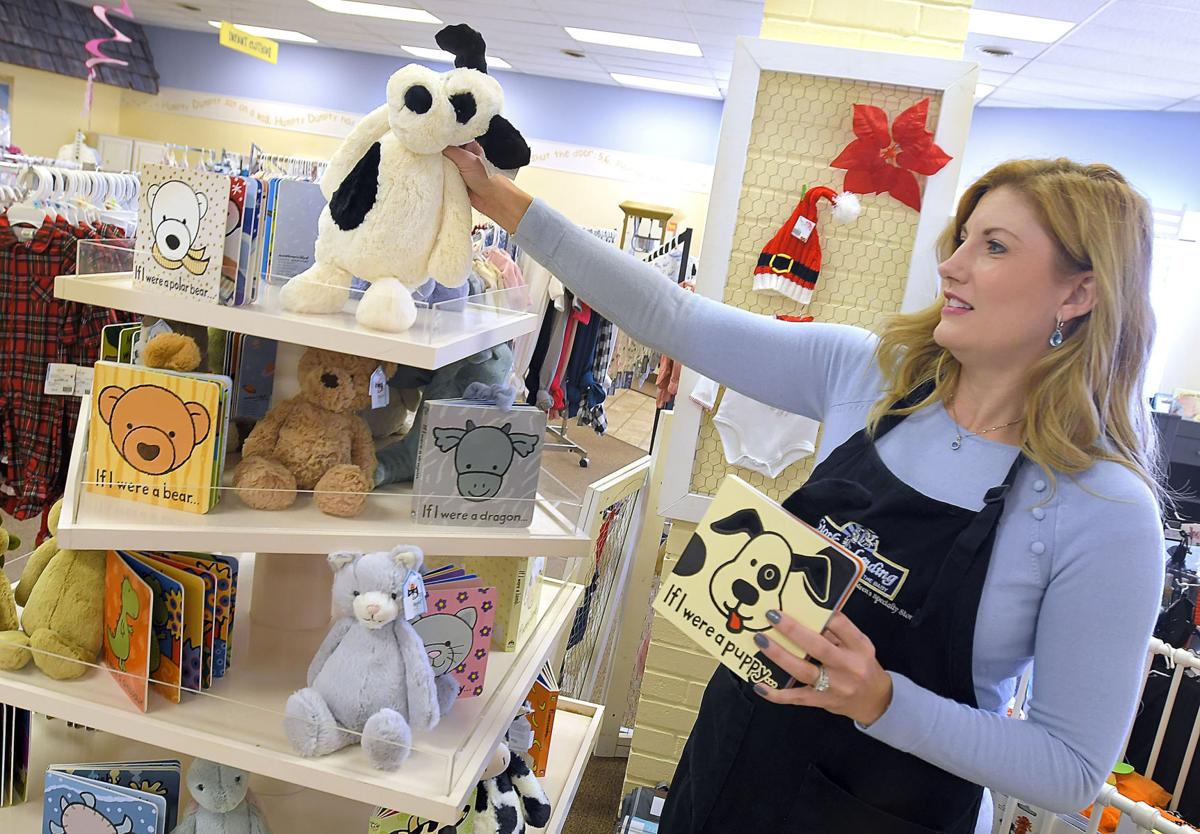 Jenilyn Needham arranges items on a shelf at Stork Landing on Tuesday. 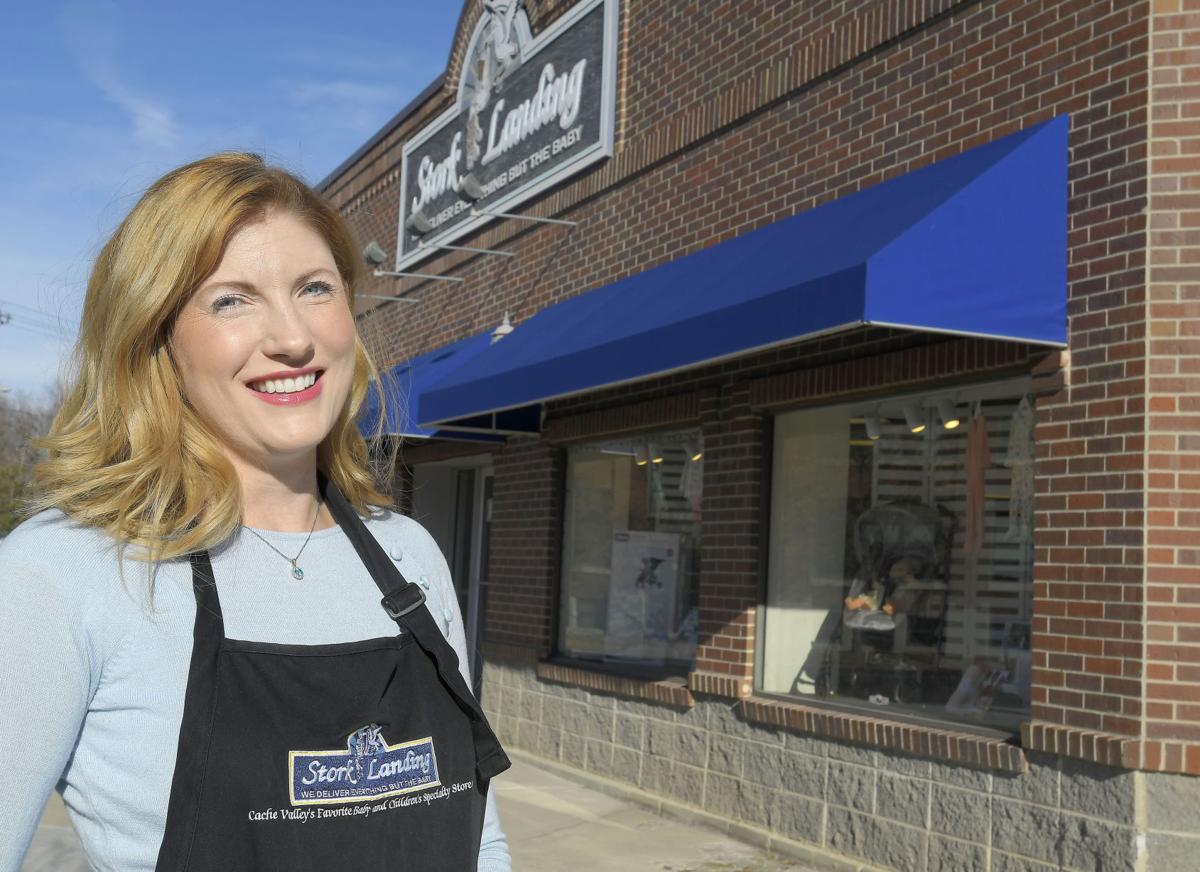 Jenilyn Needham stands outside of Stork Landing on Tuesday.

Jenilyn Needham arranges items on a shelf at Stork Landing on Tuesday.

Jenilyn Needham stands outside of Stork Landing on Tuesday.

Though Jenilyn Needham has four children, she often calls Stork Landing, the business she owns, “my first baby.”

She started managing the all-things-baby store at 99 W. Center Street with her husband in 2004. A few years later, her first child, Christian, was born, and three more would follow. The children all have, in some capacity or another, been Stork Landing store assistants, so it’s safe to say the business has grown into a family affair.

But this past week, Stork Landing announced that it was closing after almost two decades in business.

In an interview prior to the news being made public, Jenilyn said she truly believed the business would survive in a valley full of college students. But sales have been dropping.

Her husband acknowledged business can be tough.

“Maybe the size of our community combined with internet shopping just always keeps us that inch away from a good business, but it has not been enough to make it work,” Joe wrote in an email.

He put the closure into perspective, saying that the close-to 100 baby stores that were part of the same buying group as Stork Landing have all closed since 2004.

“Some of them were bigger, doing millions in sales. We are one of the last — even the buying group closed up 4 years ago,” Joe wrote. “We held on, always trying.”

On the bright side, Stork Landing was around long enough to see a baby come of age, which Jenilyn commented on when a reporter pointed that out.

“We’ve definitely loved being able to support the valley in the 18 years with the baby industry,” she said. “We love our community and we love helping people with children — because they are our future.”

Speaking of the future, there are good things to come for the former Stork Landing property, Jenilyn said. The space will be remodeled and two new businesses — possibly a boutique store and a restaurant — will be available for lease in the spring. Those additions would come after the notable downtown block closed temporarily last year for renovations.

Stork Landing is a retailer for soon-to-be parents, parents of infants and young children. Products such as cart seats, strollers, blankets and clothing are all sold there.

She pointed to the type of car seats Stork Landing sold, which were ones “tested beyond the requirements” versus cheaper brands.

“We’ve had customers be able to come back to us and say, ‘You saved my baby’s life,’” said Jenilyn.

Stork was also a popular place for friends and family to get gifts for baby showers and a place to hold events geared toward children.

“Being able to make Mom’s life more convenient has definitely been at the forefront of my mind in everything we do at Stork Landing,” Jenilyn said.

She believes Stork Landing has had a unique place in many Cache Valley families’ lives.

“They’ll find out they’re pregnant and sometimes the first thing they’ll do is come into our store because they’re so excited to be anticipating this new arrival,” Jenilyn said. “We have found that, often, we are the first to know about a parent expecting. It’s been so exciting for us to continue that journey with them. We really get to be part of the family.”

In an email, Joe Needham made similar comments.

“We have appreciated the great support, and have been a part of many family’s beginnings,” he said, before quoting the business’s slogan, “We deliver everything but the baby.”

History of the store

Stork Landing’s beginnings did not start with Jenilyn, however. It was founded by her future in-laws, Gene and Julie Neeham, in 2002. At the time, the couple were expecting their fifth child.

Gene said during the window of time their children were born, he and Julie would make trips down to Salt Lake City for baby goods.

“As we spent years, literally, kind of buying products down south, we figured, ‘Well, Logan really does not have this niche field.’ We determined we want to do it,” he said.

Gene then turned to his brother, Joe, who was enrolled at Utah State University, for some expertise.

Joe explained that he collaborated with the Needhams as part of an internship for school credit. His project was to investigate the feasibility of a business in Cache Valley.

“I reviewed competition, (b)uying groups, projected sales information and … even the birth count of our surrounding area,” he wrote.

Gene said he, his wife and Joe all had different responsibilities in putting together the business. While he gives Joe credit for coming up with the can’t-miss sign on the business’s storefront, Gene said he thought of the name and tagline.

“We felt like partners and were all pulling some good weights,” Gene said.

Stork had a soft opening in late 2002 and officially opened in January of 2003. Within a year, Jenilyn married Joe and started managing it with him.

“I’m a fourth-generation retailer — it’s in my heart and soul,” Jenilyn said, noting her great-grandfather started what is now considered a legendary downtown Logan business, The Sportsman. “I grew up in their show window. There are pictures of me looking onto Main Street. So it only made sense to continue being in retail.”

Gene and Julie Needham stayed with Stork Landing, in addition to managing their jewelry store, until 2011.

“Jenilyn had been doing some management and then they took over at that point; I stepped down completely and concentrated on the jewelry store, while Joe stepped in,” Gene said. “They really worked all the management details of the business from that time on.”

The couple’s children, like Christian, slowly became involved. He recalled going to buying shows in Las Vegas with his mom when he was younger.

“Being able to work there is very fun. It felt very good when I started. It was like I was finally helping out and doing my part in helping the family,” Christian wrote in an email.

Joe said Stork Landing had much the same offerings since it opened.

“We always wanted to have the best products with the great quality provided to this valley,” he wrote. “Over the years we did carry more cribs then we do today due to the sales trailing off in that category and we also originally had maternity clothes as well.”

Joe said downtown Logan was a great home for Stork because the area is full of businesses with “rich heritages.”

“I hoped that Stork Landing had added to its part to downtown vitality,” he wrote. “Overall, downtown’s future is looking up and it has been fun to be a part of it.”