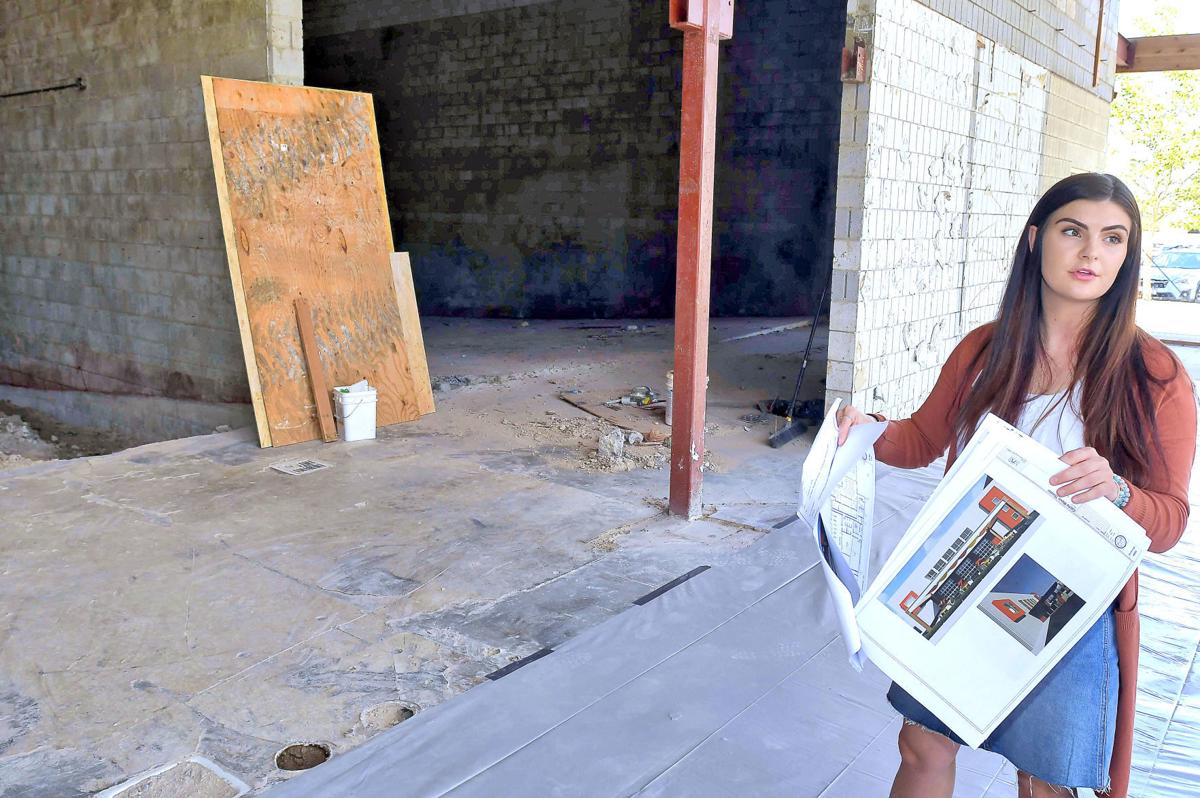 Lexi Johnson talks about the plans to renovate the old movie theater in the Cache Valley Mall parking lot.

This architectural rendering shows The Old Mann Revival, an extensive remodel of the former Cache Valley 6 theater for use as an event center and home to two locally owned and operated restaurants.

Lexi Johnson talks about the plans to renovate the old movie theater in the Cache Valley Mall parking lot.

This architectural rendering shows The Old Mann Revival, an extensive remodel of the former Cache Valley 6 theater for use as an event center and home to two locally owned and operated restaurants.

After more than a decade standing vacant in the Cache Valley Mall parking lot, developers are working to transform an old movie theater into a place for events and dining.

The Cache Valley 3 movie theater shuttered when the larger University Stadium 6 opened across the street in 2007. Now drivers may notice that the sheathing over the windows at 185 E. Cache Valley Blvd. has come down and the building’s been gutted in preparation for an extensive remodel.

The developers, Ardent Property Management, are hoping to wrap up construction in spring 2020. The developers have had their hands in other projects remodeling older buildings around the valley, including the buildings on Federal Avenue now occupied by Lucky Slice and Achievement Realty, as well as the Borden Lofts apartments going into the old Borden milk plant and Logan Coach building.

Renovating those old buildings for new uses is something of a specialty for Ardent, according to Assistant Project Manager Lexi Johnson.

“It’s kind of cool that we keep the building and just kind of renovate it a little bit, so the old structures don’t get knocked down,” Johnson said. “We keep them around. Which is kind of cool, a little bit different.”

Ardent dubs the project “The Old Mann Revival.” Plans include two restaurants on the ground floor and building out the old projection booth level into a second floor, which will become an event center run by local entrepreneur Dee Jones.

Ardent Owner Tony Johnson said the name came after Logan Senior Planner Russ Holley jokingly said he should come up with a creative name. The building’s original name was the Mann Theaters, so Tony said he landed on The Old Mann Revival.

While the company is remodeling rather than demolishing the building entirely, the final result, with its metal exteriors and patio spaces, will look little like the old movie theater.

Ardent has lined up two longtime Cache Valley restaurateurs to occupy the first floor: Mario Trejo of the Greek Streak II and Eliseo Garcia of Sabores.

“I feel great, I feel happy,” Garcia said of plans to open the new restaurant. “Finally, my dream is coming true. At the beginning, that’s what I wanted, you know, to have a few restaurants.”

He was nervous when they opened Sabores, which serves international cuisine, because people might not give unfamiliar dishes like lomo saltado a chance. He’s built up a loyal customer base, however, of adventurous eaters and returned missionaries.

Garcia hopes those customers will try out the new restaurant when it opens.

“We’re going to give you the freshest foods and good quality, and we’re going to do a 100% effort to please everybody,” Garcia said.

Garcia said he hopes to cater some of the events coming to the second floor, such as quinceañeras and weddings.

The Greek Streak II will be moving from its location by Lee’s Marketplace in Logan into the renovated building, and Garcia will be opening a new authentic Mexican restaurant and bakery.

Trejo said he’s excited for the move because it means more room for his restaurant to grow as well as a chance to have a bigger impact on the community.

“It allows us to give people more jobs, to bring a bigger menu, to just give a different option for the valley as far as food and entertainment,” Trejo said.

The restaurant’s current location off 1400 North has done well for it, Trejo said, especially given the growth that’s happened in that area and the new businesses that would bring in new customers to the Greek Streak. But he and others at the restaurant were just thinking about future goals when Ardent approached them about the Old Mann Revival.

“From the beginning of the idea to right now, it’s been really neat to see how something that’s been planted there for so long and vacant to be turned into something that’s new and exciting for the area,” Trejo said.