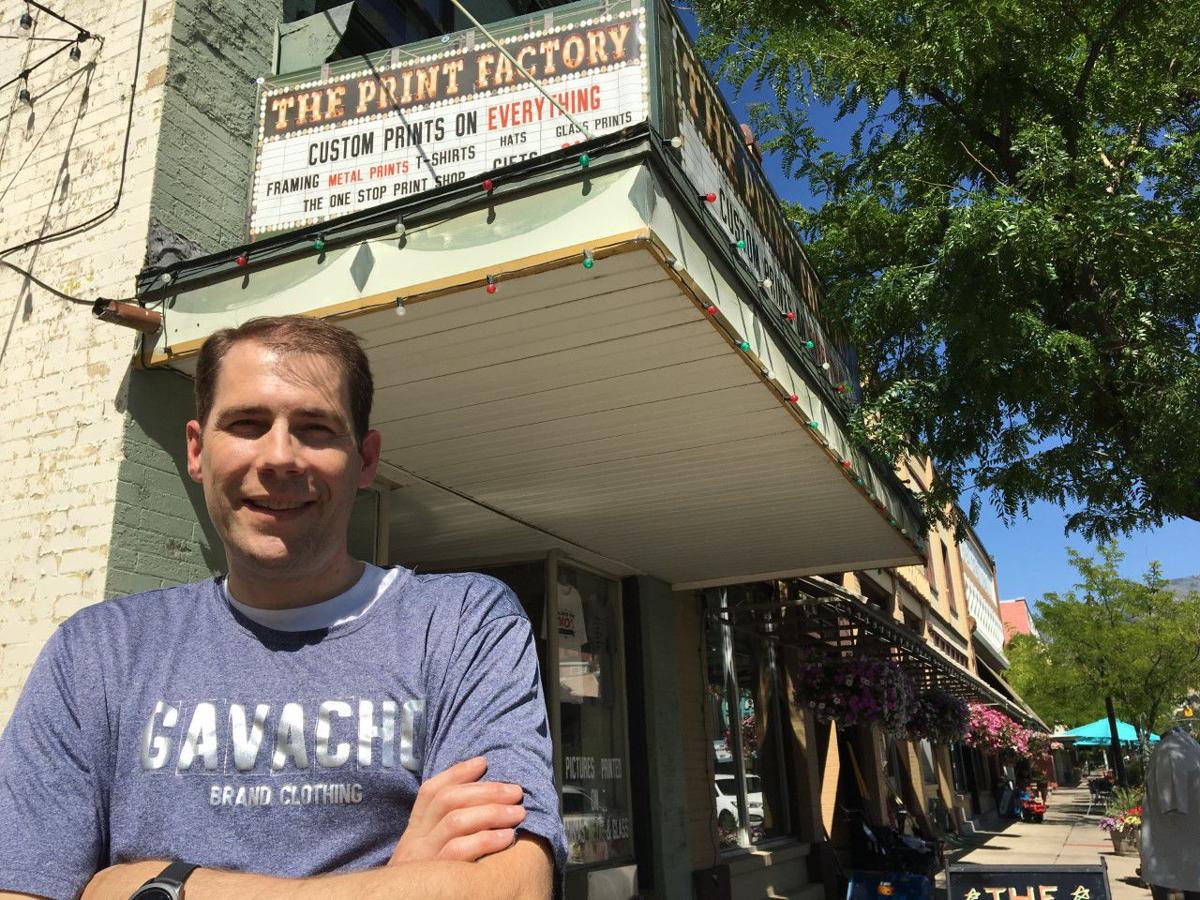 Jeff Flammer, co-founder of The Print Factory, poses for a portrait on Center Street in Logan beneath the marquee sign displaying his business’s name. 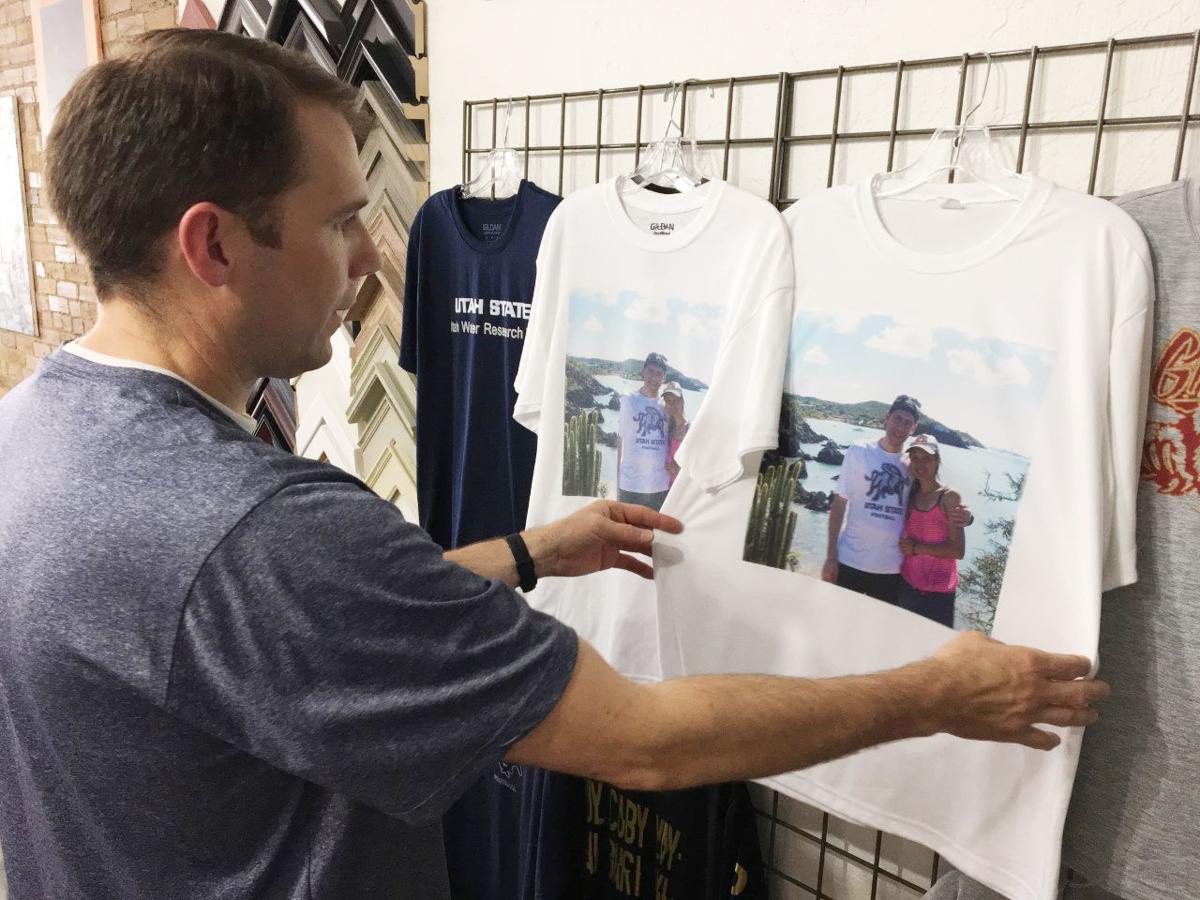 Jeff Flammer shows The Herald Journal a t-shirt with an image of him and his wife. The Print Factory can print an image of anyone’s choice on a variety of materials, from cotton to ceramic cups. 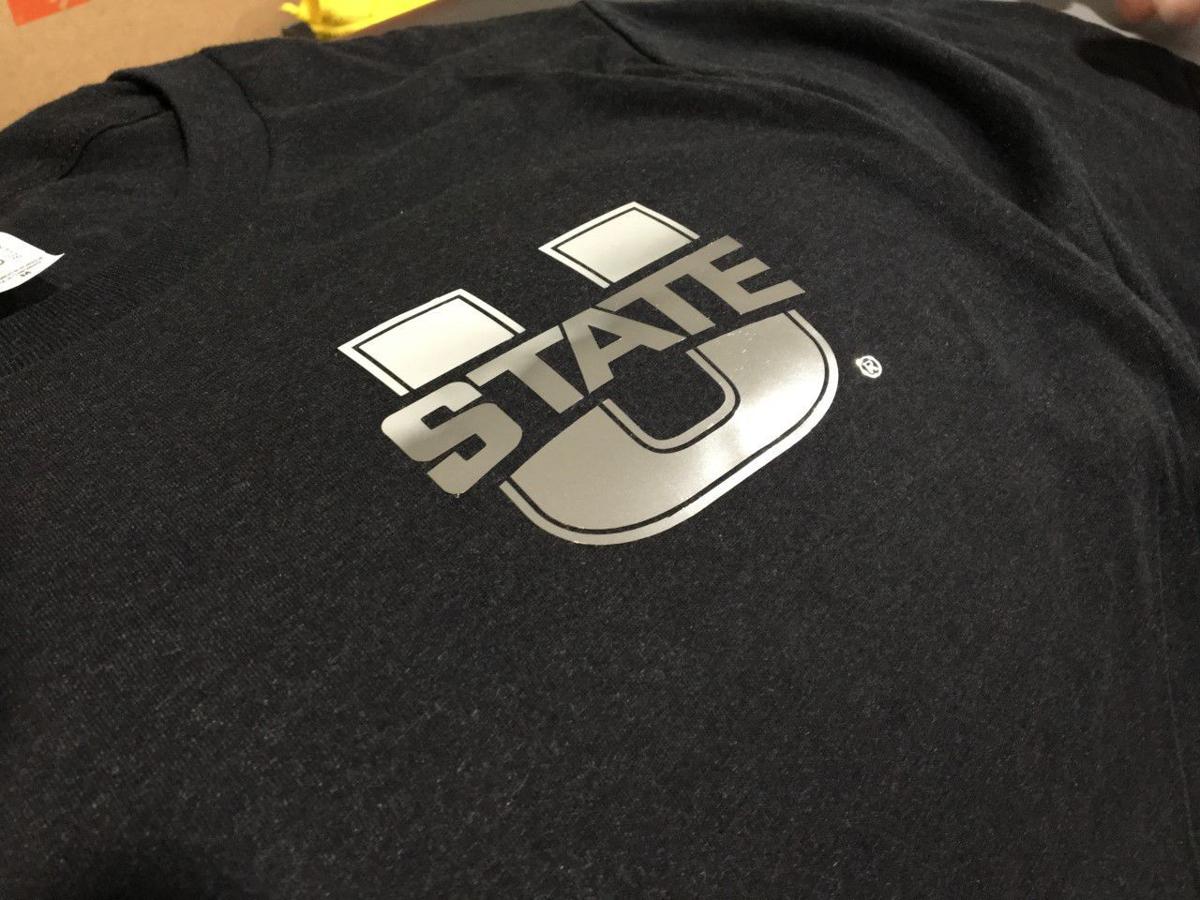 A black T-shirt with the Utah State University logo.

Jeff Flammer, co-founder of The Print Factory, poses for a portrait on Center Street in Logan beneath the marquee sign displaying his business’s name.

Jeff Flammer shows The Herald Journal a t-shirt with an image of him and his wife. The Print Factory can print an image of anyone’s choice on a variety of materials, from cotton to ceramic cups.

A black T-shirt with the Utah State University logo.

Last week, inside his business on Center Street in downtown Logan, Jeff Flammer pressed a few Utah State University logos onto T-shirts and showed another that included an image of him and his wife on St. Martin’s Island.

The shirts Flammer made were just a few examples of what this relatively new establishment, The Print Factory, is capable of.

Open since the spring of 2018, The Print Factory uses digital technology to place any image of the customer’s choice onto, well, just about anything: canvas, wood, metal, mugs, jewelry, neckties and even glass.

“You see the different options and it kind of opens up a world you didn’t know was there,” Flammer said. “That’s what’s fun about it.”

There’s a need for The Print Factory in an era in which everyone has a cell phone camera, he argued.

“You take an image and you snap it, but what do you do with it?” Flammer said. “You come into The Print Factory and we can show you some options of things you can do.”

Of the vast array of options, Flammer added, “It isn’t something you go to Walmart and pick up — it’s a very customized piece of art that you created.”

Scott Shaffer, a manager, printer and graphic designer at The Print Factory, said an increasing number of consumers want to buy things custom-made as opposed to out of a box.

"People want things to be done how they want," Shaffer said. "As customizability has become more popular, it's become more prevalent and that is due to evolving technology. … People have caught onto that and said, 'Oh hey, that is actually a really good thing and it's a very cool idea.'"

Not only does The Print Factory fulfill custom orders, it’s also licensed to print and sell Utah State University apparel.

While many businesses use screen printing to put custom images on apparel, Flammer boasts that he doesn't make any of his customers’ orders that way.

That process is dye sublimation, in which a sheet of ink is pressed into a shirt and the ink transfers from the paper to the shirt. This process is done with a unique printer and ink, according to Flammer.

There are benefits to printing this way as opposed to screen printing, he said.

“The ink is in the shirt, so it’s never going to come off,” Flammer said. “With the screen print … at some point, it’s going to crack and peel and come off.”

Flammer, a Cache Valley native who grew up in Providence and attended USU, started printing T-shirts in 2009.

“I actually was going to start my own brand of clothing — that’s what got me started,” he said. “So I bought a dinosaur of a printer.”

After several years, it became clear to Flammer that he either had to “build this business or shut it down.”

Around that time, a Center Street property opened up and he asked the owner if he could sign a lease for the space.

“I thought we’ll give it shot in a retail location and see how it goes — it’s been good,” Flammer said. “It’s a small business. It’s growing.”

Shaffer, who joined The Print Factory a few months ago, said the business appeals to him because he always loved to design his own clothing, photography and illustration.

"I've always wanted to find a good place to print them at," he said. "When I first ran into The Print Factory, I couldn't believe it."

In addition to his creative endeavors, Shaffer is also a martial artist who has pressed his own logos onto his uniforms at The Print Factory.

"A lot of customers' reactions are very similar to mine — 'That is a really good product and a great way that you do it,'" he said.

Flammer has a familiar-sounding slogan for anyone who has trouble finding the business, located on 71 W. Center Street: “Middle of the block at the sign of the croc” — a play on the S.E. Needham Jewelers' catchphrase and a nod to the small crocodile decal on seen on The Print Factory’s sign outside the store.