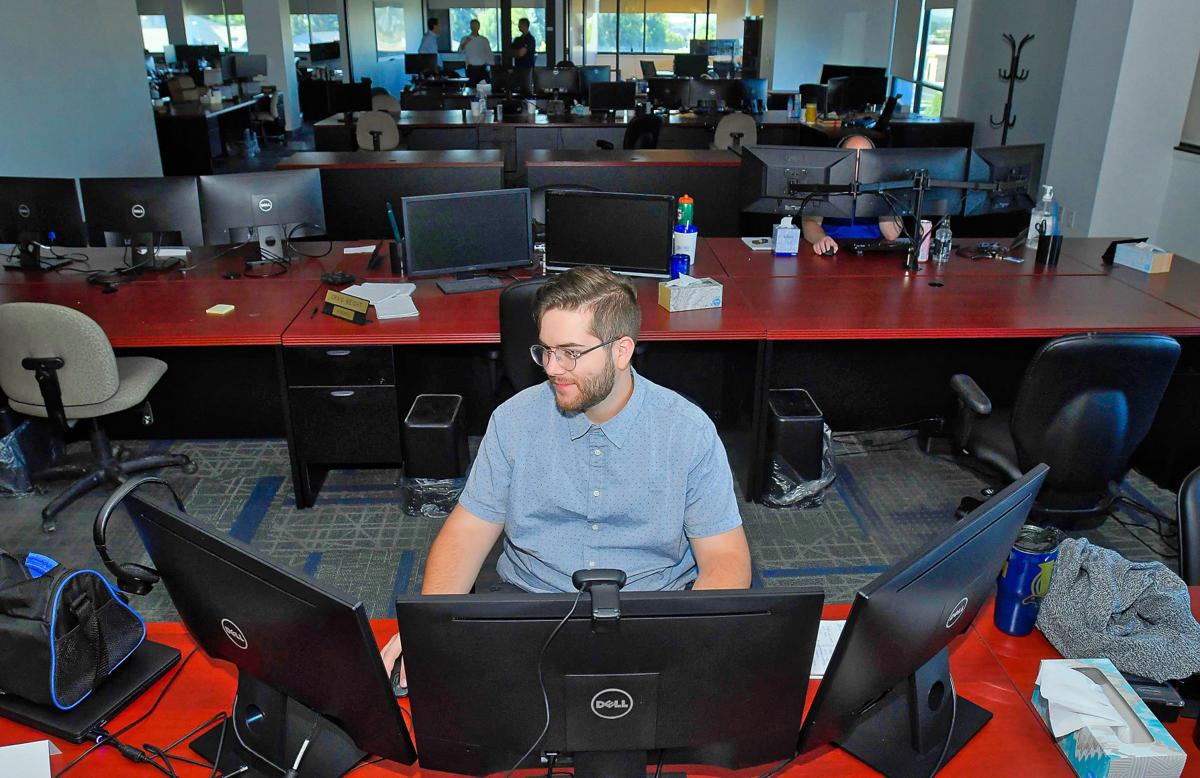 Mason Nielson works on his computer at Conservice, Tuesday in Logan. He is one of only a handful of Conservice employees not working from home. 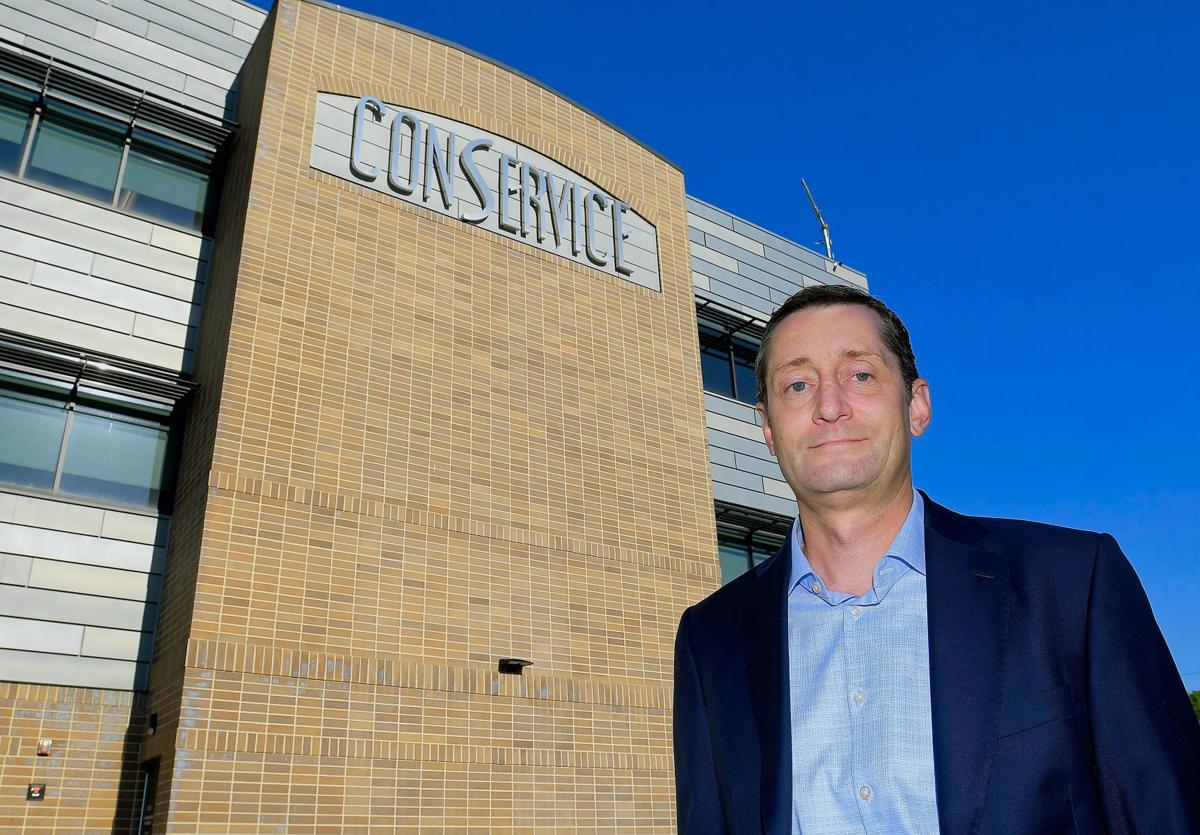 Dave Jenkins poses for a portrait outside the Conservice building on Tuesday. 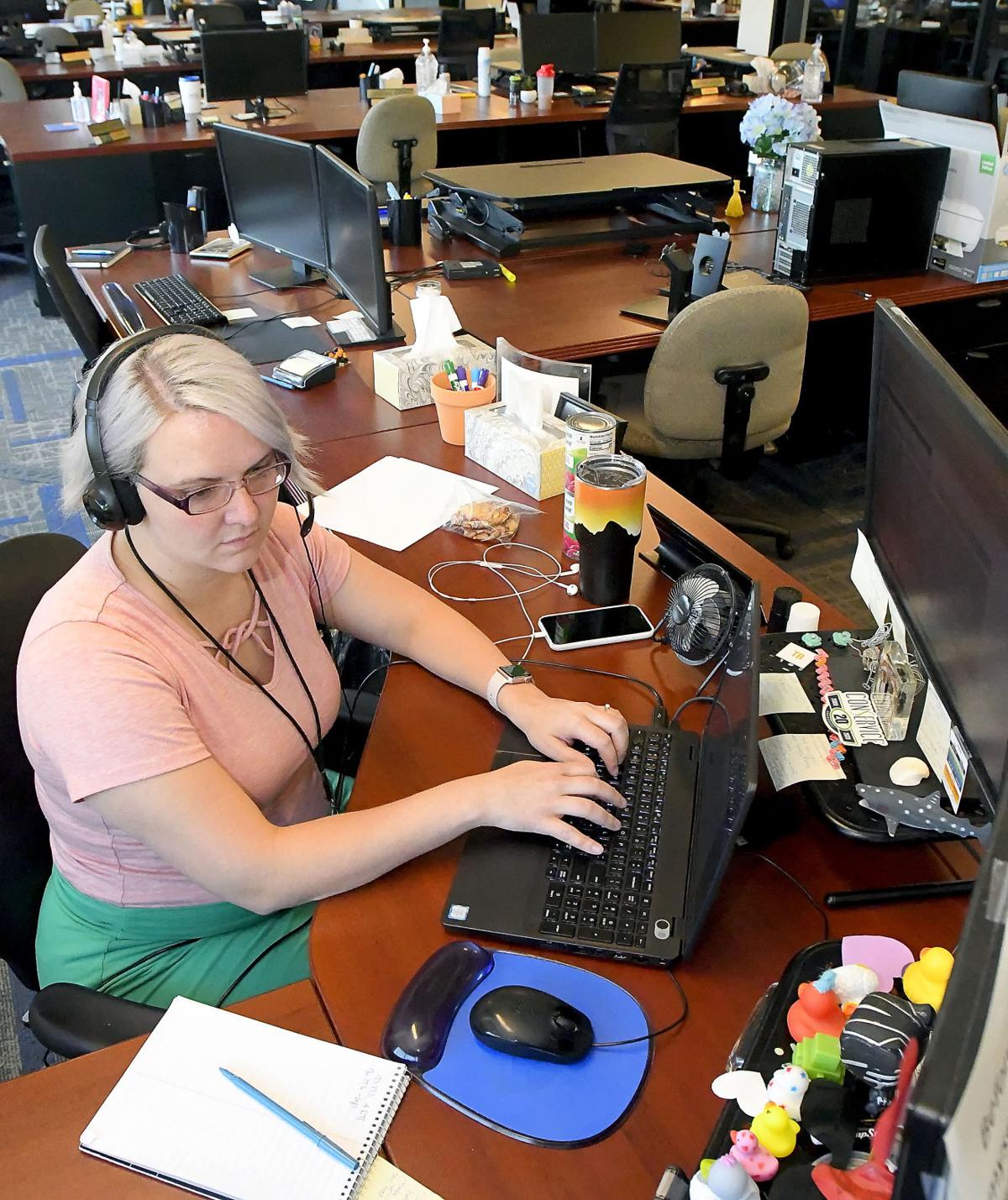 Alycia Jacobson attends an online meeting with coworkers on Tuesday at Conservice. She is one of only a handful of Conservice employees not working from home.

Mason Nielson works on his computer at Conservice, Tuesday in Logan. He is one of only a handful of Conservice employees not working from home.

Dave Jenkins poses for a portrait outside the Conservice building on Tuesday.

Alycia Jacobson attends an online meeting with coworkers on Tuesday at Conservice. She is one of only a handful of Conservice employees not working from home.

When Conservice co-founder David Jenkins first heard about coronavirus cases hitting the U.S., he knew his company had to do something.

“By mid-March, everything was starting to shut down on the coast and we said, we’re going to need to prepare for a shutdown as well, so what are we going to do?,” Jenkins said in an interview with The Herald Journal via teleconference this past week. “We can’t not be in business, of course. There are too many people we want to keep employed, and customers we need to take care of.”

Though Conservice determined — after consulting its attorney and federal guidelines — that the utility management and billing company was an “essential business,” Jenkins and his associates ultimately decided the best solution for the more than 2,000 employees was to have them work from home.

“We didn’t have to close and we could make people come in the office,” Jenkins said, explaining management’s ultimate course of action was voluntary.

That decision came the same year that Conservice is celebrating its 20-year anniversary. Founded on August 28, 2000, by Jenkins, a USU alumnus, and business partner Liz Bunte, Conservice initially provided billing services for apartments. But has since grown into much more.

A slice of silicon in Cache Valley

The company not only is an outsource accounts payable for its customers, it installs utility meters and has stayed true to its name (“conservation services”) by “encouraging conservation by making people accountable for their consumption,” Jenkins stated in a 2016 interview.

With 2,083 employees, the company has increased the number of people working there by almost 900 over the last four years, putting Conservice in the top 50 of Utah companies with the highest team-member count, according to Jenkins.

What’s more — earlier this year, Conservice sold a minority stake to Advent International based on a $2.66 billion valuation, making it one of the largest owners of the company.

All of those feats are on top of the fact that Conservice boasts itself as a company that seems more like one residing in California’s Silicon Valley than one in Cache Valley.

Not too long ago, Conservice unveiled a massive complex in River Heights, which includes a break room that feels more like a lounge, a cafeteria offering high-end meal choices, and big windows that offer sweeping views of the valley.

And for many years, Conservice offered a ride-share service for employees, but that has ground to a halt due to COVID-19.

“Other companies, much smaller than us, do some of these things, but no one is as progressive at the size and scale we are,” Jenkins said. “It is a real challenge to stay this way as a company grows — when we had 300-500 team members you can do a lot of things easily — but at 2,000, it is very challenging. … The team has worked hard to keep the culture even with growth.”

Diana Velasquez, new accounts setup trainer who has worked for Conservice almost 13 years, said the way the company operates is just one of the things that stands out to her about Conservice.

“To be trusted and given the freedom to do my job without somebody looking over my shoulder is refreshing,” she wrote in an email. “Overall, the culture, the company’s priority to protect team members and family’s health along with excellent benefits sets Conservice apart from other places I’ve worked.”

Kirk Jensen, economic development director for Logan, praised Conservice even though it is not based in his city.

“The diversity of Cache Valley businesses gives us great economic stability regionally,” he wrote in an email to the newspaper. “Conservice, with a workforce that’s 2,000 strong and with a focus on utility billing and energy procurement, is a significant part of that varied business landscape.”

Conservice isn’t just contributing to the valley’s economy; it’s giving back to the community, too, with the Conservice Cares program.

“We’ve done millions of dollars of donations, time and food in the local community through those years,” Jenkins said. “I’ve said, ‘If Conservice weren’t here, what would it be like?’ We do a lot of things for a lot of the non-profits in Cache Valley.”

Under the program, Conservice employees are allow to do two hours of paid community service a month.

The decision to move Conservice employees from the office to home work was an effort unlike anything Conservice officials had anticipated.

That’s because “we weren’t completely set up to do that,” Jenkins said.

In fact, the company’s “contingency plans” called for only 500 people to be working from home, he said.

With the pandemic starting its wider spread in March, Conservice set in motion a “five-day rolling process” by which employees could work from home. The company let those at the highest risk of contracting the virus go first and the lowest risk followed.

“We let them designate where they were at on the scale,” Jenkins said.

Employees could use a home computer with “secure connections” or take one from the office home.

“When I walk around the office, half of the computers are gone and half are on their desk,” he said.

Of working from home, Velasquez said, “I felt blessed to work for a company where I would still have a job and would be able to perform my daily duties without any hardships, unlike many other companies.”

Jenkins expects the work-from-home policy to remain in effect until at least the end of the year.

The “big question,” Jenkins acknowledged, is how to phase business back in so that everyone is working in the office again.

“It’s going to be mostly judged by how our team members feel about it,” he said. “Maybe it goes in phases, that there are some people who say, ‘I’m fine, I’m coming back in’ and then there are going to be others who have to wait for a vaccine because of their personal or family situation. We’ll just be adaptive to that.”

Reflecting on the unique decision, the Conservice co-founder said he doesn’t regret it.

“That was a hard decision, in some ways, because, obviously, a lot of resources going into that,” he said. “But we thought that was all outweighed by the safety. … The corporate responsible thing to do was to have everybody work from home because we could figure out how to do that.”

What’s surprised Jenkins is that productivity is up. For one thing, employees can process bills faster.

“(It’s) probably because there’s less distractions, there’s less meetings; you can kind of pick your schedule,” Jenkins said, before chuckling. “Particularly in the first months … they worked harder just because they were grateful to have a job.”

Velasquez said working from home has been “a great learning experience in restructuring my program.”

“Being creative, and more efficient training larger groups remotely,” she wrote. “I agree with Dave 100% — productivity has increased along with teamwork and dedication. So far nothing has been impossible for Conservice.”

There’s the very real health aspect: some people at Conservice have contracted COVID-19, according to Jenkins.

“The lucky thing for us is I don’t think anyone’s missed any work yet,” he said. “You worry about the unknown somewhat, but I think my job is to instill peace and confidence in people as a leader. There are a lot of people who are worried and scared and so I send out regular communications to the team ... I remind people that Conservice has been here for 20 years and we’ve been through a lot of challenges — some of them really big ones — and everything works out.”