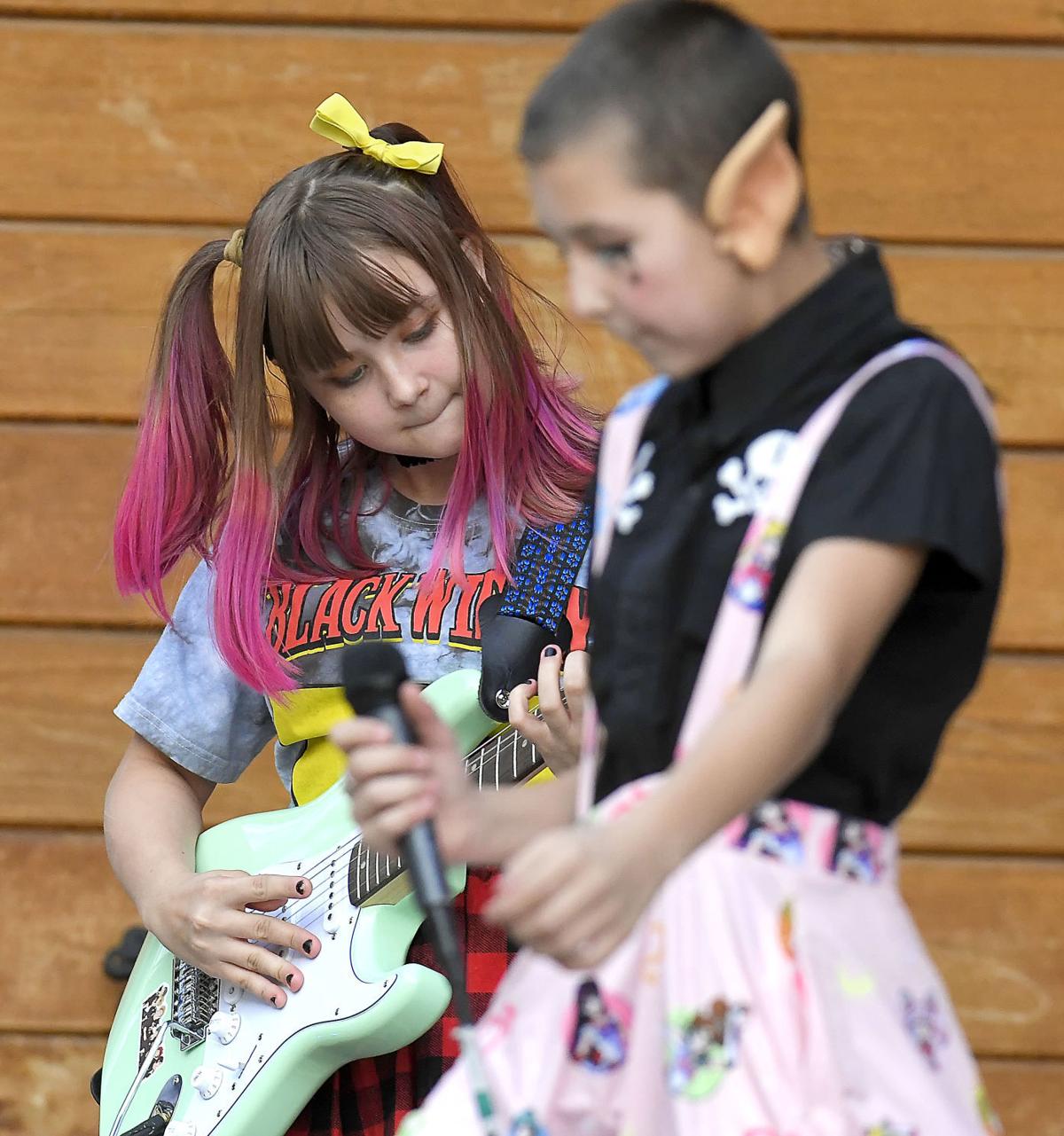 Olivia Murdock, left, and Olive Vasic perform with the group VHS during the Riff’s & Roni’s concert on Friday in Logan. 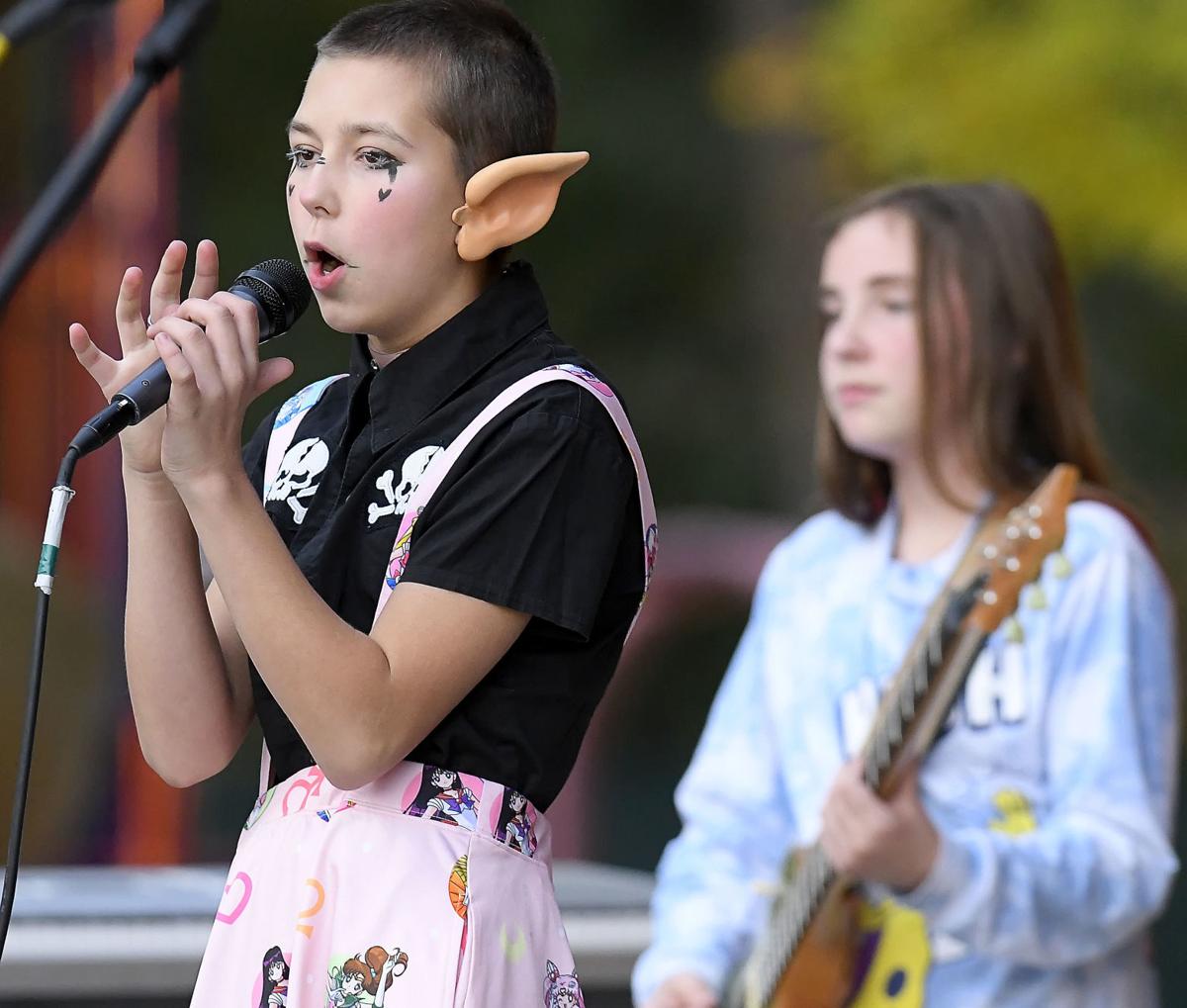 Olive Vasic, left, and Khole Thigpen perform with the group VHS during the Riff’s & Roni’s concert on Friday in Logan.

Olivia Murdock, left, and Olive Vasic perform with the group VHS during the Riff’s & Roni’s concert on Friday in Logan.

Olive Vasic, left, and Khole Thigpen perform with the group VHS during the Riff’s & Roni’s concert on Friday in Logan.

A crowd of about 130 young musicians and families gathered at the pavilion at Willow Park on Friday evening to enjoy music, pizza and ultimately, to support local musicians.

“It just started because we wanted to give something for people to do, just with COVID and everything,” said Carson Manning, the general manager for the Logan Lucky Slice. “There’s been nothing to do, especially live music.”

From the three student bands, fans heard everything from grunge, punk and rock songs to ballads, funk to instrumental jazz. Then local indie musician Nora Barlow and bands Sorrymom and little Barefoot took to the stage.

In all, the night was one the first free concerts for the public since March.

In addition to the entertainment factor, local businesses donated merchandise to raise scholarship funds for kids to receive instruction at the Good Times School of Music.

“It gave an opportunity for some of their kids to perform, which they definitely haven’t been able to do recently,” Manning said. “(From something to do) … it kind of evolved into ‘Hey, we could do something with this, too. We could use this money and help some people out.’”

Manning had no further to look than neighbors among Logan’s downtown businesses.

The local-favorite pizza place will be donating all proceeds from the pizza sales to fund scholarships for students at the school. Caffe Ibis coffee was offered along with the cheese and pepperoni pizza.

WhySound provided the sound equipment and lined up local musicians to play after the students. Volunteers sold raffle tickets for swag from The Anniversary Inn, KSM Music, Directive Boardshop, the Island Market and Lucky Slice.

“These kids mean a lot to us,” said Jon Starn, an instructor and co-founder of the school. “We’re all teachers, and we’ve been teaching a lot of these kids, some for up to 15 years. And so they mean a lot to us, and we know how much it means to them to be part of something like this. Just because you can’t afford it this semester is no reason in our minds why you shouldn’t be part of this.”

The first time the school offered scholarships was in August.

When COVID-19 forced the school to pivot to outdoor, physically distanced and sanitized measures, typically classes were shifted to a summer camp format. Local businesses like KSM Music provided funds to help students whose families were struggling still participate.

Seven families were able to pay half tuition thanks to the donation, and several others had all fees covered.

“We have a lot of kids that could use it,” Starn said. “A lot of kids couldn’t make it back this last semester because they couldn’t afford it just yet. There’s been quite a few industries hit by COVID, and there’s not as much expendable stuff these days.”

The school was one of the few safe options for kids to connect with friends, according to Sherrie Calles of Brigham City.

“The quarantine has been such a bummer for kids, for both our kids,” Calles said, “but this is a good outlet where (our daughter) can get out. This is one of the few things that she’s still able to do.”

They added that the school is more than just music lessons but teaches kids how to perform and interact in a band.

And the students weren’t alone.

The entertainment industry was one of the hardest hit during the pandemic, from the ballet and opera to local performance artists who all lost gigs.

Taylor Ross Wilson, the project manager at WhySound — the longest running all-ages venue in the valley — said the business was able to stay afloat largely due to the transition from a music venue to the recording studio and creation of the WhySound record label.

“None of the venues are really doing shows,” he said. “We’ve done a couple with WhySound, just outside, and we’ve organized some roller skate shows where people travel between stages outside. … They’ve all been pretty big, but this will be the first free one we’re doing.”

Wilson, who also performed at the event with little Barefoot and has been a local musician for more than a decade, said events like Friday’s concert are crucial to keep the art scene alive in Logan because so many events have fallen due to COVID-19.