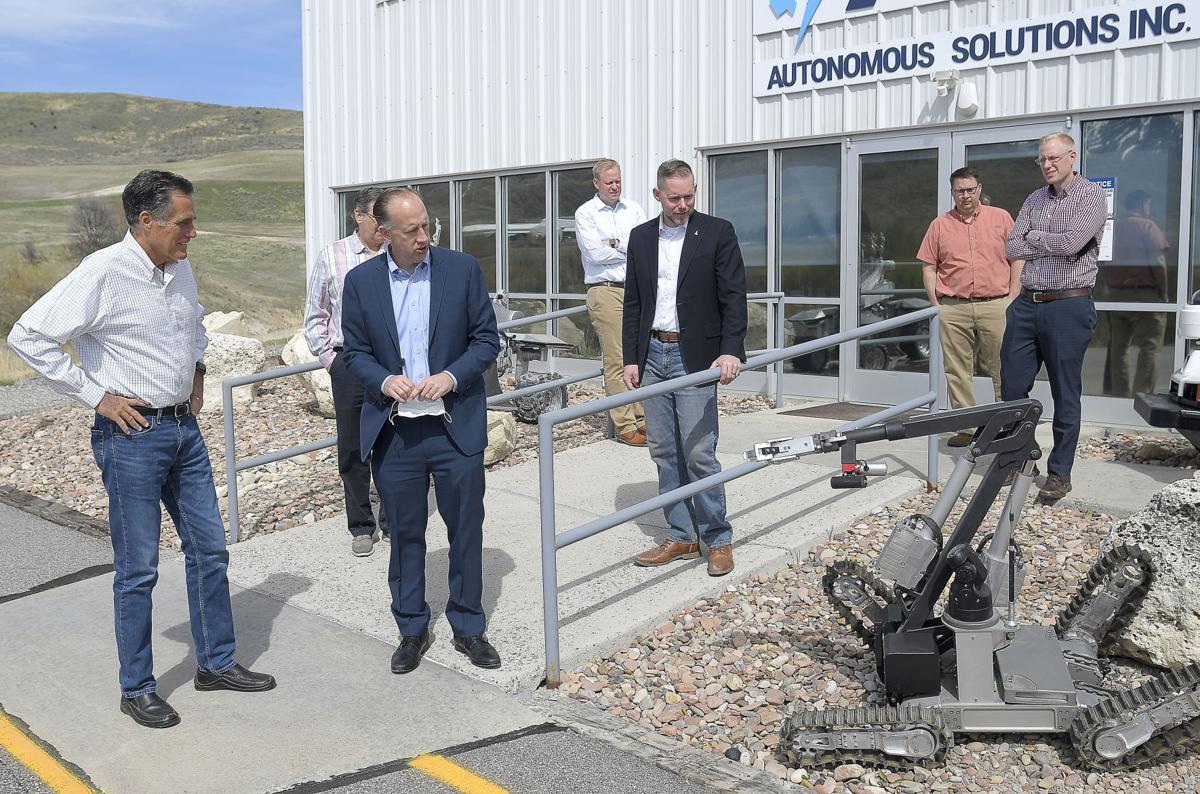 Mel Torrie, second from left, tells Sen. Mitt Romney about some of the projects that they are working on at Autonomous Solutions, during a tour on Friday. 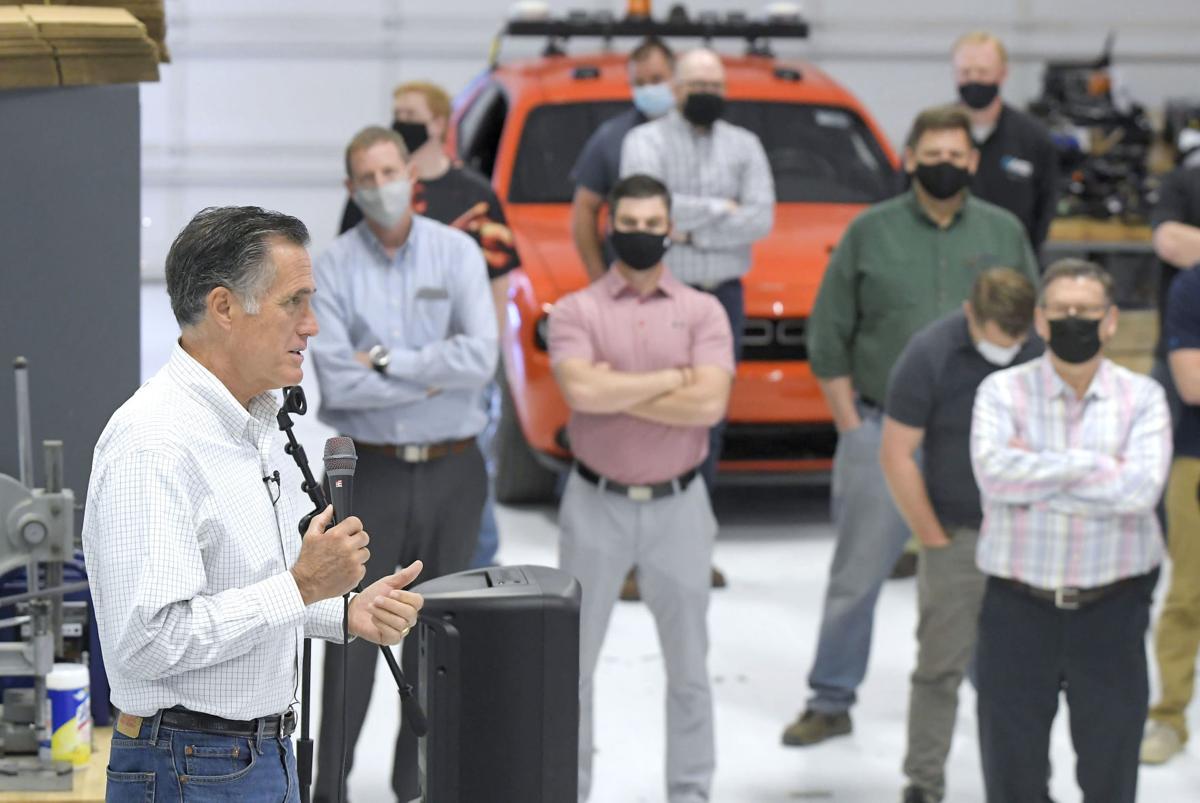 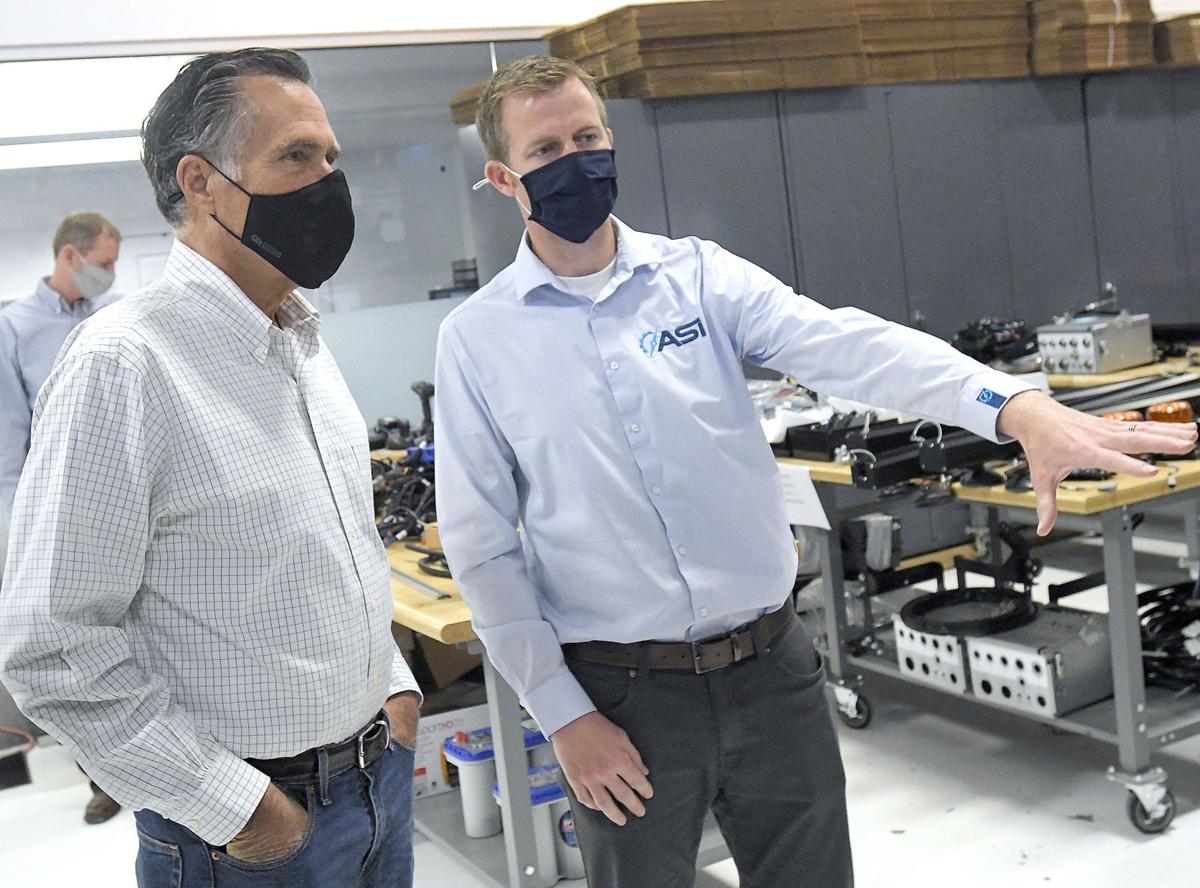 Jeff Ferrin, right, speaks to Sen. Mitt Romney about some of the projects that they are working on at Autonomous Solutions, during a tour on Friday.

Mel Torrie, second from left, tells Sen. Mitt Romney about some of the projects that they are working on at Autonomous Solutions, during a tour on Friday.

Jeff Ferrin, right, speaks to Sen. Mitt Romney about some of the projects that they are working on at Autonomous Solutions, during a tour on Friday.

Utah Sen. Mitt Romney paid a visit to Cache Valley on Friday morning for a crash course in vehicle automation and robotics.

Romney toured the offices and proving grounds of Autonomous Solutions Inc., a Mendon-based company specializing in vehicle automation systems, and spoke to employees during a town hall event.

Romney told The Herald Journal ASI had the potential to affect local, statewide and global economies and he wanted to get a sense of the business’ future.

“This is not only a beautiful corner of our state,” Romney said, “but it’s a center of innovation. And ASI has demonstrated some of the technological innovations that I think will help change the global economy.”

Prior to visiting the facilities, Romney said he didn’t anticipate ASI’s ability to control remotely multiple “massive” mining trucks — an operation that simultaneously cuts labor costs and makes jobs safer for those working in-person. He also expressed interest in the company’s potential to address agricultural and climate related issues.

“The only solution that will bring down global emissions is the acceptance of new technologies,” Romney said.

For Romney, there appears to be “a growing recognition” among conservatives of a warming climate that “poses a real threat to humankind.”

“And then the question is, ‘What do we do about it?’” Romney said. “I think a lot of conservatives, like myself, are not anxious to do things that sound good but don’t make any difference. We’re looking for things that will actually change the emissions.”

During the town hall, Romney addressed three of the biggest challenges he believed were currently leveled against the United States: U.S. policy toward China and the country’s emergence as a global power economically and militarily; a growing national debt; and how to deal with an ever-warming climate. But ASI president and CEO Mel Torrie said Romney’s visit also provided some peace of mind regarding the company’s dealings abroad — particularly in Ukraine.

Torrie said ASI began working in Ukraine’s mining industry about the time Russia annexed Crimea in 2014. Since then, Torrie said there’s been an “on-and-off threat” to ASI’s ability to operate effectively in the area.

Last month, several news outlets reported a large-scale build up of Russian troops along the Ukrainian border. Being a small company with around 150 employees, Torrie said there was concern about sending in personnel and future deliveries amid potential conflict.

“Am I going to be able to get (the delivery) in there?” Torrie said. “I’m counting on it to feed my people.”

Romney told the employees during the town hall that he believed “Russia was rattling their sabre and making everybody nervous,” but didn’t fully dispel Russia as a potential threat.

Torrie said Romney’s perspective was, nevertheless, a comforting one, and he was pleased to be able to share what the business does in the realm of robotics.

“It’s a blessing to have him here to share his insights,” Torrie said. “It means the world to us.”

Torrie said the demand for such systems stems from businesses being unable to hire human employees. In many instances, Torrie said the automated systems actually allow businesses to stay afloat and retain their current workers.

“These businesses can’t stay in business without that kind of support,” Torrie said. “Those are the kind of customers we’re working with.”

Despite specializing in automation, Torrie said the company revolves around the idea of putting “people first,” and he was grateful for the talented personnel at ASI willing to work in a rural area.

“That’s really what it’s about,” Torrie said. “The key is really the quality of the people.”