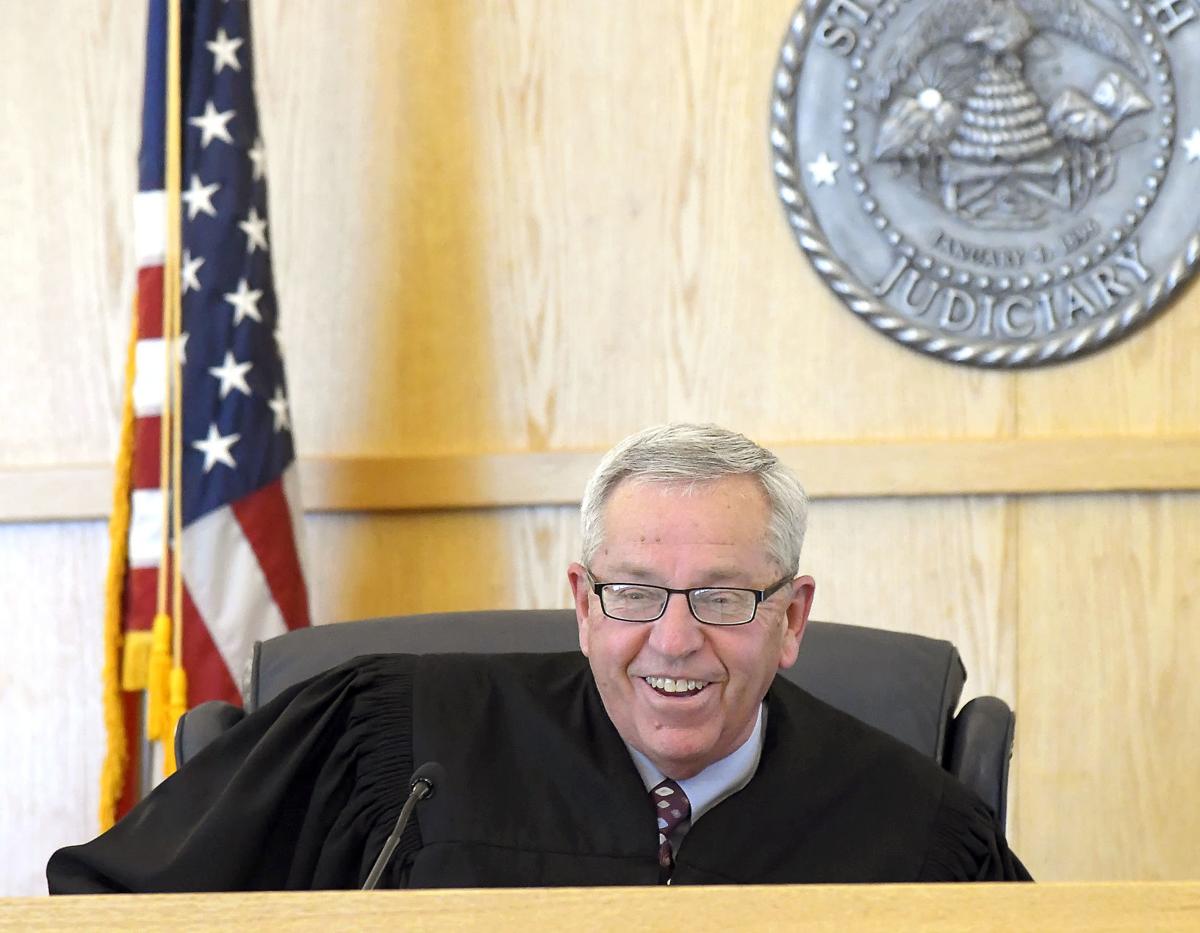 Judge Thomas Willmore smiles on Tuesday, as a participant in Drug Court tells about some the good things that have happened to them in the past week. 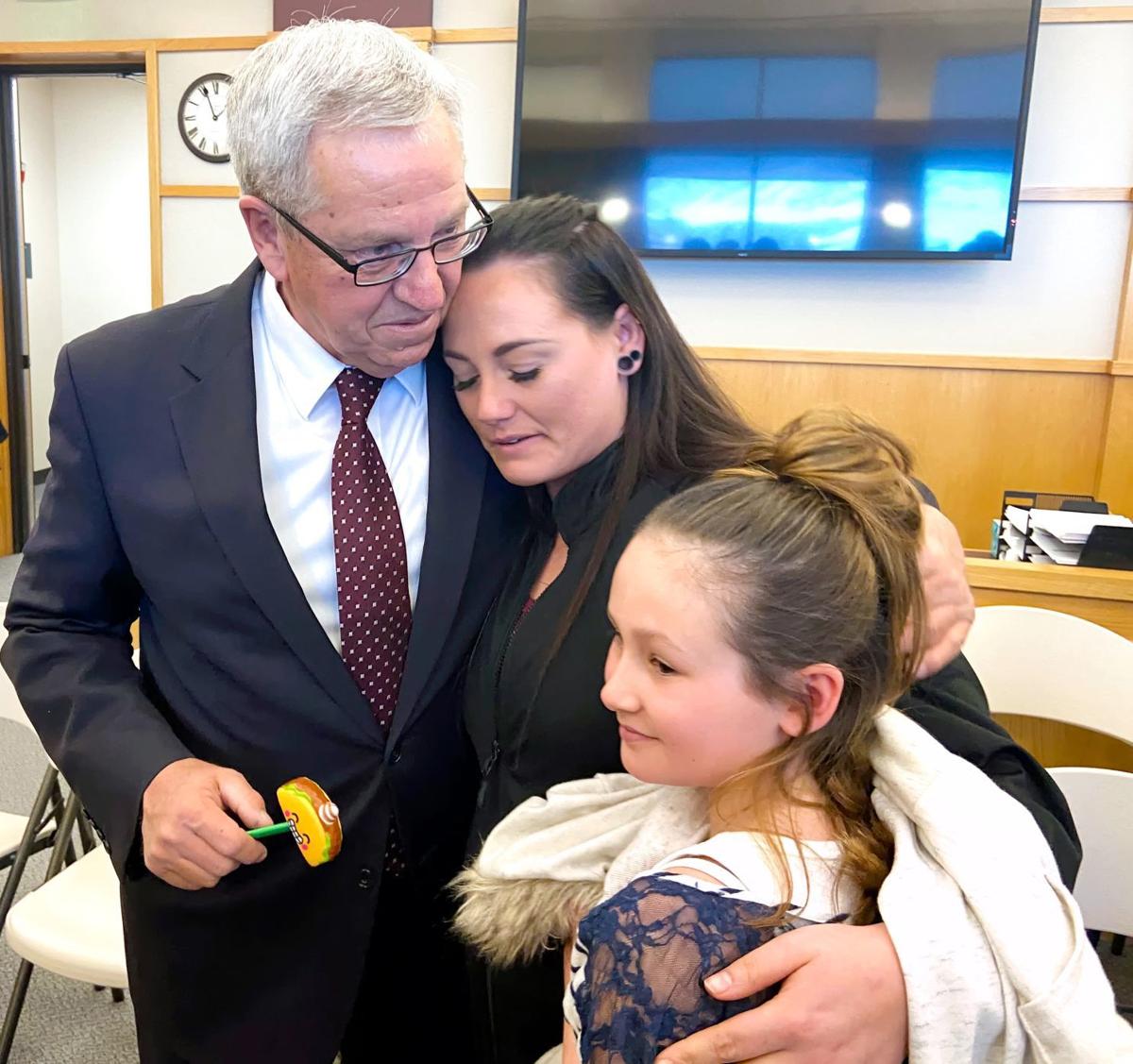 Kristie Neilsen, who went through the Drug Court program, and her daughter Berklee Carter hug Judge Thomas Willmore following a retirement ceremony for Willmore on Friday. Carter told Judge Willmore "Thank you for helping get my mom clean, you are my hero."

Judge Thomas Willmore smiles on Tuesday, as a participant in Drug Court tells about some the good things that have happened to them in the past week.

Kristie Neilsen, who went through the Drug Court program, and her daughter Berklee Carter hug Judge Thomas Willmore following a retirement ceremony for Willmore on Friday. Carter told Judge Willmore "Thank you for helping get my mom clean, you are my hero."

Intimidating, encouraging, tough and compassionate — these are some of the words used by colleagues and drug court graduates to describe Judge Thomas L. Willmore as he approaches his retirement from the 1st District Court this month.

On Friday — in front of a courtroom packed with family, friends and co-workers celebrating his more-than-two-decade career on the bench — Willmore spoke on the importance of the court, the value of the team around him, and the lives touched by the drug court program he pioneered nearly 20 years ago.

Willmore established the drug court programs in Cache and Box Elder Counties., For a time, he presided over both. Since then, Willmore said, nearly 500 people have graduated from the Cache County program alone. He said the recidivism rate is substantially lower for drug court participants than those simply sentenced to serve time.

“Some of the saddest words that I’ve ever heard in court are, ‘I can’t stop using,’” Wilmore said, “‘I don’t know how to stop.’”

On Tuesday, Willmore was presented with an award by Cache County prosecutor Spencer Walsh and defense attorney Shannon Demler for his dedication to the drug court program and establishing the fifth such program in the state of Utah.

Multiple drug court graduates shared their appreciation for Willmore and the drug court program he formed.

Chris, who graduated from drug court in 2016, said he was injured in a work accident nearly 20 years ago. He said the injury led to drug use, drug abuse and ultimately the use of street drugs.

“My life quickly spiraled out of control,” Chris said.

Chris said Willmore and the drug court program helped him develop crucial skills for dealing with life’s struggles. He now has a job he enjoys, he’s trusted in the community and he’s involved with others in recovery as a result of Willmore’s compassion.

“Judge Cannell has some big shoes to fill,” Chris said.

Honesty matters to Willmore, according to the graduates. He can be observed at court routinely asking uncomfortably direct questions, such as: I’m not asking for excuses, I’m asking why you continue to use? Why aren’t you working — you could get a job at Burger King tomorrow?

“You don’t lie to Judge Willmore,” said Paul, a drug court graduate who spoke on Friday. “He doesn’t ask you questions he doesn’t already have the answers to.”

Paul said he faced charges that should have resulted in a prison sentence, but a Drug Court opportunity from Willmore turned things around. He said he attended Drug Court Tuesdays for nine months from the jury box while incarcerated. Now, on each anniversary of his recovery day, Paul said he always grabs an extra coin to give to Willmore.

Willmore said he will continue to attend all drug court graduations in the future and wants to help in any way he can.

Willmore thanked the citizens who allowed him to serve, and his fellow judges from whom he learned so much. He applauded the court staff, clerks, bailiffs and court security for their service over the years.

“It’s been such an honor to be a District Court Judge,” Willmore said.

He repeatedly mentioned and praised his tolerant wife and family.

“I’m not even going to talk about them, because I’ll start crying,” Willmore said.

A Utah State University alumnus, Willmore received his law degree from the McGeorge School of Law at the University of the Pacific. He was appointed to the 1st District Court by former Gov. Michael Leavitt in 1999.