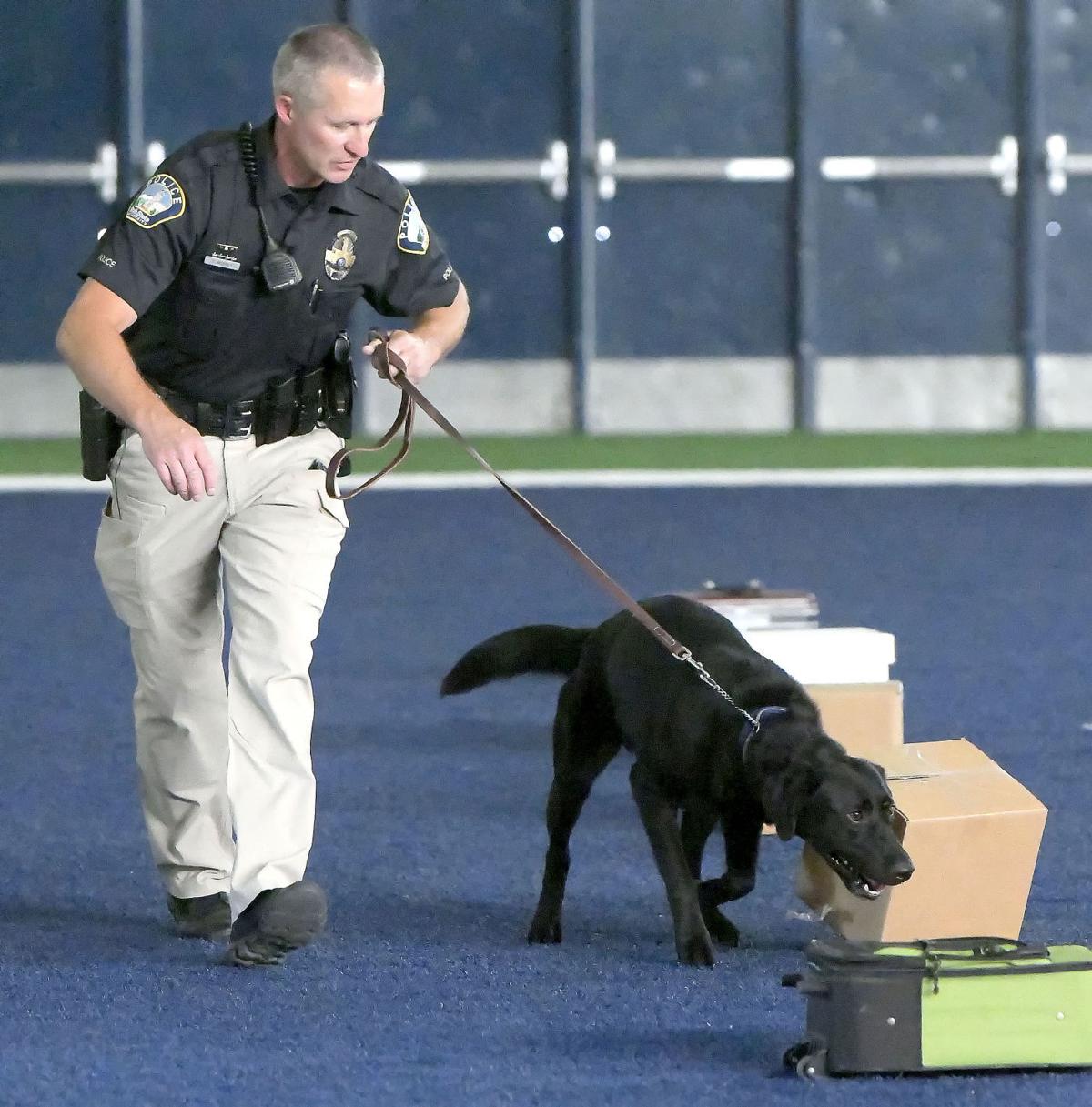 USU Police Officer Scott Murray and his K-9 partner Zoomer demonstrate how the dog can find detect explosives on Thursday. 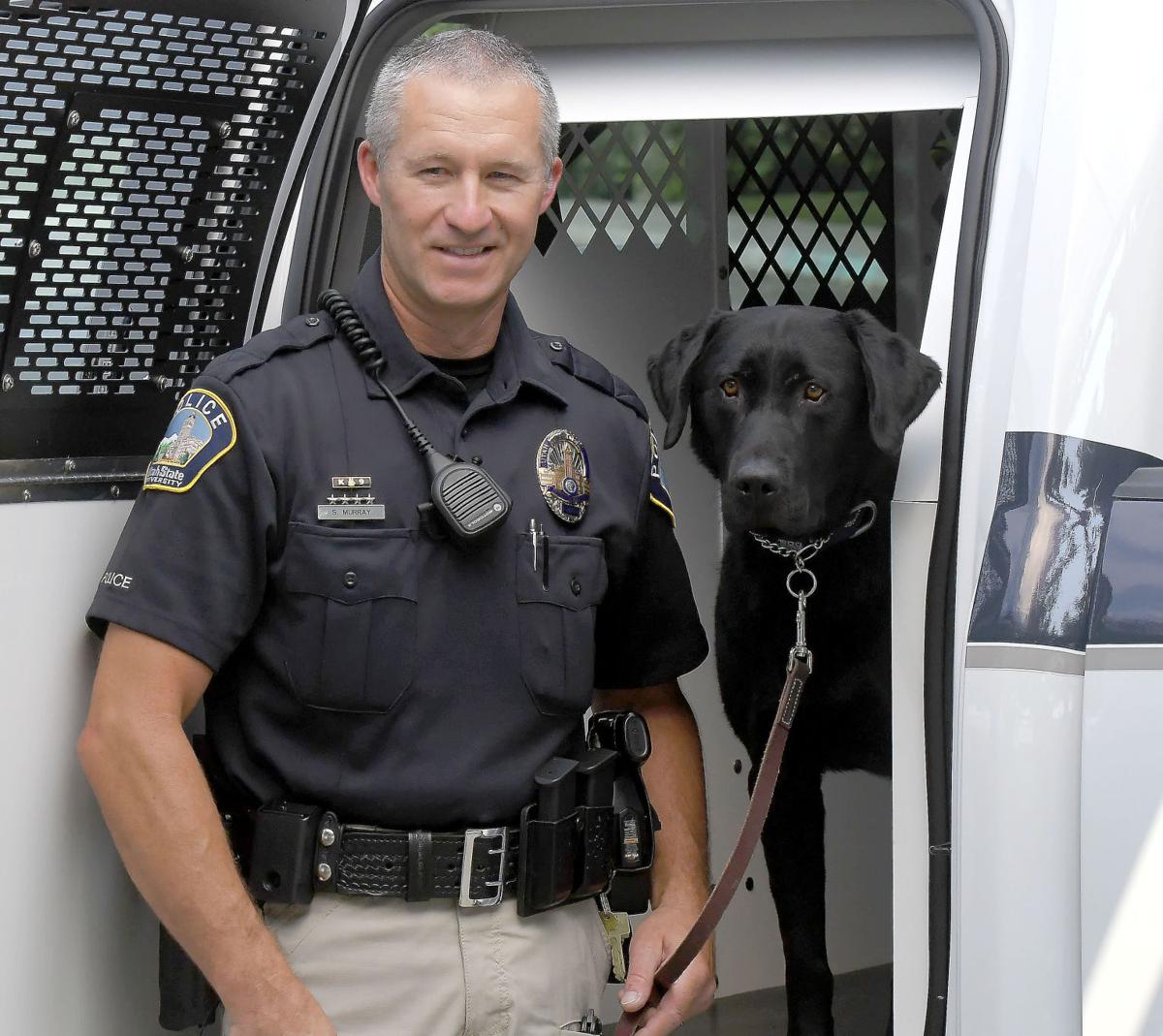 USU Police Officer Scott Murray and his K-9 partner Zoomer demonstrate how the dog can find detect explosives on Thursday.

Meet Zoomer, a two-year-old black Labrador Retriever with a predilection for explosives and tennis balls.

On Thursday, Utah State University Police introduced Zoomer as the newest member of the department. A tactical police dog with an emphasis in detecting explosives, USU Police Officer Scott Murray said Zoomer is the first-ever USU police dog and the only explosive detection dog north of the Wasatch Front.

During a demonstration of his abilities inside the Stan Laub Indoor Training Center at USU, Zoomer quickly sniffed out a quantity of smokeless powder housed in luggage among several other packages. Murray quickly rewarded the Zoomer’s indication with a light toss of a tennis ball and a round of plaudits.

USU Police Capt. Kent Harris said there were two main reasons for acquiring a “bomb dog” — university safety and providing a resource to surrounding agencies should the need for explosive detection arise. Harris said the department wanted a very approachable working dog — Zoomer is not imprinted to bite — but one that could also serve as a visible deterrent.

“We want to make sure the university is the safest we can make it,” Harris said. “We wanted to make sure we have a resource that the surrounding agencies can utilize and make the entire community safe.”

The cost for working police dogs varies, according to Harris, and Zoomer’s price tag is being covered by a combination of the department’s budget and a potential $30,000 grant. Murray said part of the arrangement for funding was to share Zoomer’s super sniffer with neighboring agencies.

Murray said Zoomer wrapped up his final training on Aug. 14 — an 80-hour, two-week course taught on campus by Pacific Coast K9. For Murray, Zoomer provides peace of mind; if there is a suspicion package or a threat of explosives, officers will have Zoomer to respond.

“A lot of his day-to-day duties with me is public relations — just being a visible deterrent,” Murray said, explaining Zoomer may also sweep facilities prior to events.

Murray, who is the only officer allowed to handle the dog, said he and Zoomer bonded very quickly over the course of two weeks. Zoomer is now with Murray “24/7.”

At home, Murray said Zoomer is comfortable around his new family; he’s got a nice kennel outside along with plenty of food, water, affection and play time.

“He is like a bull in a china closet, to be honest with you,” Murray said with a laugh. “He’s full of energy.”

But to live with a working dog, for Murray, is about balancing work and play.

“You have to help the dog understand that, really, when he’s out of his kennel and into the vehicle to go to work, it’s work time,” Murray said. “You can easily ruin a dog’s workability by its home life being way too relaxing.”