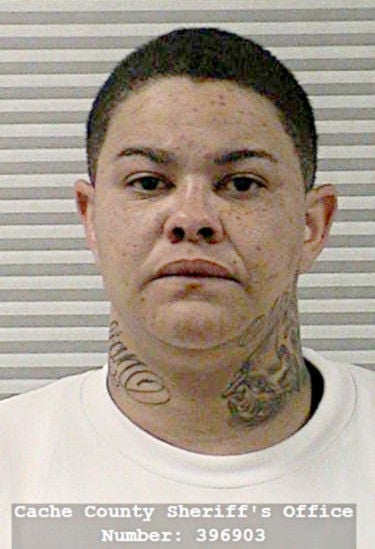 Driver accused of shoplifting, hitting Al’s employee with car, and leading chase at speeds over 100 mph

Police say a woman who was later arrested at gunpoint in Brigham City on Wednesday night is suspected of running down a loss prevention specialist at approximately 8:30 p.m. at Al’s Sporting Goods.

According to Logan Assistant Police Chief Jeff Simmons, the incident started as a retail theft. While police were en route, a woman reportedly ran from the store with an armload of merchandise and loss prevention officers hot on her heels.

The woman threw the merchandise into what appeared to be a gray Volkswagen Jetta that was waiting for her in the parking lot.

“She then ran around the front of the car, and so did the Al’s employee,” Simmons said. “Well, the driver of the car then took off, striking one of the Al’s employees, carrying him on the hood for a short distance — 30 or 40 or 50 feet — until he fell off.”

At that point, the driver of the car — initially described as a male with tattoos on his neck — continued forward and picked up the woman, who had continued running southbound through the parking lot, and then drove off.

Police say they later identified the driver as Brittany Lee Franklin, 35, who appears to move between Roosevelt and the Salt Lake region. She was booked into the Cache County Jail just after midnight on suspicion of aggravated robbery, aggravated assault, retail theft, obstruction of justice, failure to remain at an injury accident, and failure to obtain a driver’s license.

There was also a failure-to-appear warrant out for her arrest from a court in the Salt Lake area.

According to Simmons, the store employee struck his head on the pavement, but his injuries were minor. He was checked out on scene by paramedics, but was not transported for additional treatment.

The car was spotted in Wellsville about 20 minutes later and a Cache County Sheriff’s deputy attempted to make a traffic stop, but the driver took off, entering Sardine Canyon at a high rate of speed.

A Cache County-based Utah Highway Patrol trooper who joined in the pursuit reported the vehicle was traveling at speeds of 80-105 miles per hour through light traffic.

According to scanner traffic, dispatchers immediately notified Box Elder County and made arrangements for law enforcement there to be prepared to assist.

“The vehicle hit the spike at nearly 80 mph, hitting both right side tires. The suspect vehicle-maintained control and traveled approximately. ¼ mile before pulling to the side of the road,” stated Cache County Sheriff Chad Jensen in a press release. “A Cache County deputy used his vehicle to block the driver from leaving the car.”

According to UHP Lt. Lee Perry, the car continued for about a mile before stopping. The female passenger fled on foot, and despite an extensive search, she has not been detained at this time.

The driver — a woman who officers had initially mistaken for a male from a distance — was almost immediately taken into custody at gunpoint, according to police.

While formal charges have not yet been filed, Simmons said a Cache County prosecutor was called to the scene and reviewed security footage from Al’s with investigating officers and played a role in determining what charges might be considered.

Simmons said Franklin and her passenger are suspected in several other theft-related incidents in Cache Valley and along the Wasatch Front.