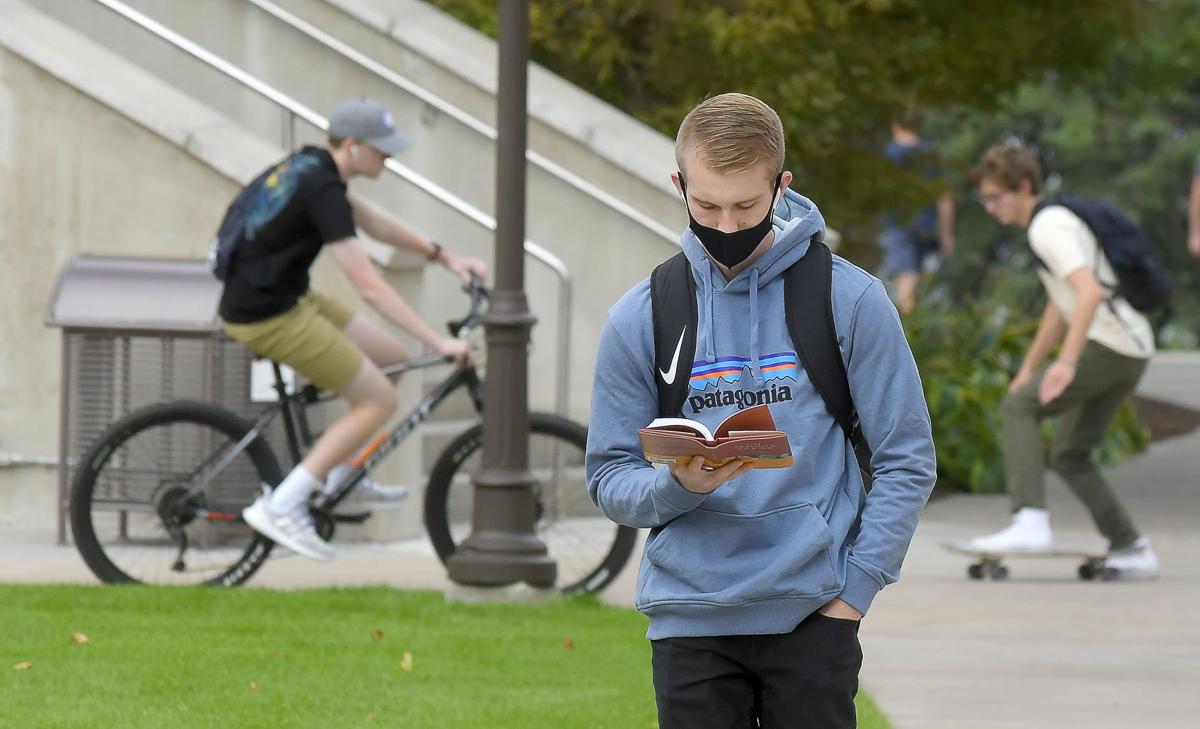 USU student Collin Tanner reads a book while walking across campus on Friday. 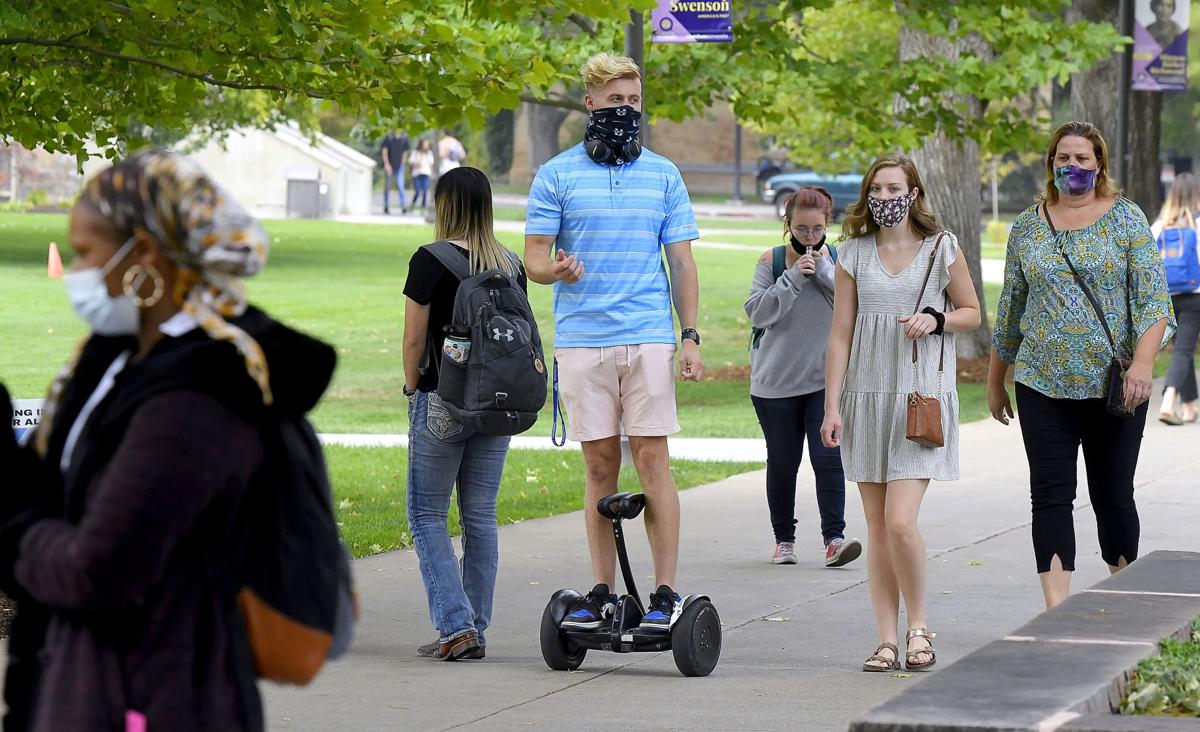 Masked students walk across the USU campus earlier this semester.

USU student Collin Tanner reads a book while walking across campus on Friday.

Masked students walk across the USU campus earlier this semester.

A month ago, when Utah State University had a phased move-in for students living on campus, not as many of them were wearing masks while outside — despite a policy requiring face coverings.

But that changed within the first week of fall semester, said Amanda DeRito, USU’s director of crisis communications.

“We put up a lot of signage and did a lot of work that way and we saw more people wear masks,” said DeRito. “I just think people didn’t know as much about what we were trying to do when they first arrived on campus. It just shows you can get behavior to change when you put a message everywhere.”

Besides signs, which are scattered throughout campus, USU has sent out email notifications to students reminding them to wear masks and provided “COVID Care Kits,” which contain two of them.

Discussion of USU’s mask policy comes as news reports and viral videos have exposed a segment of society that refuses to comply with wearing a face covering in the midst of the coronavirus pandemic.

DeRito said the videos “make me cringe,” though she has not heard of incidents of that level happening at USU.

DeRito offered a positive note about the way things are going on campus regarding mask wearing.

“None of us can look into the future and see what’s coming, but I think the overall tone has been really compliance-oriented and people wanting to do what they need to do to stay on campus,” DeRito said.

According to the USU website, the policy “requires that everyone wear a face covering or disposable mask in all university buildings and vehicles, and outside anytime you cannot practice social distancing.”

DeRito said USU will soon re-evaluate the mask policy and whether it should remain in effect through spring semester.

“I can’t imagine it would change until we have a vaccine available and much of our population has gotten it,” DeRito said.

The USU policy is consistent with the governor’s executive order that face coverings must be worn when visiting state facilities, as well as the Utah Board of Higher Education’s plan, which stipulated a series of “gating conditions” for colleges and universities to reopen this semester — one of them being that “adequate supplies” of personal protective equipment be available.

DeRito noted the strong feelings about mask-wearing throughout the country and said that as far as USU is concerned, the campus community has had “really good” compliance.

“Even when I’m out there walking around, it’s great; you see even people walking alone on campus outside wearing masks,” DeRito said.

During a visit to campus, a reporter spoke with a number of students, who understood that masks must be worn indoors — with some notable exceptions — while making their own judgement call outdoors.

Roughly half of the people a reporter saw on campus were wearing masks outside. For almost all of those people who were not, a mask could be seen somewhere on their person.

USU student Austin Garrett, a freshman mechanical engineering, was one of those students who had a mask on him but chose not to wear it while outdoors.

“Basically, it’s just all day long, I’m either taking it off or keeping it on, so a lot of us just have buffs and it’s just easier to keep it with us at all times,” Garrett said.

It was not uncommon to see groups of people walking closely on campus in which some people wore masks and some people didn’t.

“A lot of people feel that they can maintain that six-feet social distancing, so it’s not as pressing — I guess is a good word for it — to wear outside,” Virgil said.

Karns said it doesn’t seem strange to be wearing a mask outside but walking next to someone who isn’t.

“I think our masks have almost become part of our identity,” she said. “I wear my mask and I don’t think half the time I realize I’m wearing my mask anymore. But I think that’s just a personal thing on my part, and not everyone thinks the same thing.”

Karns added she doesn’t have a problem wearing a mask.

“We do what we need to, to make everyone feel safe, which is why I wear a mask, so everyone else feels safe with me,” said Karns, who notes she has no classes on campus and only visits for extracurricular activities.

Sami Ahmed is this year’s USU student body president. He is also featured on the USU website wearing a mask.

Ahmed said he is “trying to lead by example,” wearing a mask throughout campus. So far, his example seems to work; he hasn’t had to tell anyone to put their mask on.

“In the case that someone doesn’t and I have to engage, the way I would approach that would be to ask if they have a mask or if they need one — in a non-confrontational kind of approach,” Ahmed said.

DeRito said USU will continue with the mask policy and keeping with the principles of prevention to stop the spread of COVID-19.

“We’re trying to make sure people know what they need to do,” she said. “We know that not everyone is happy with that, but that’s what we need to do in order to have in-person opportunities and to have students on campus.”

DeRito added, “It’s one of those things that doesn’t feel natural at first, but I think we’re all getting used to it.”

“I thought it was going to be really annoying, but it’s pretty much become the new norm,” he said. “Same thing with bringing my phone and my wallet — I pretty much know to bring it everywhere I go. I’m fine with it.”

Emotions behind the mask

DeRito said the face-coverings policy has not come without its share of criticism, which runs the gamut.

Strong feelings about masks have been seen not just at USU and Utah’s higher education institutions, but throughout the U.S. Some people have made headlines for pitching fits — and in some cases, getting violent or arrested — over being told in public places to wear a mask.

Utah County was thrust into the public spotlight earlier this summer, when maskless Provo residents crammed into commission chambers to protest the decision that K-12 institutions require face coverings during the current school year.

When asked about the viral videos, Ahmed started by saying that people have their own opinions when it comes to masks there is a debate on “whether or not it’s an infringement on rights.”

“My opinion is, if it is a private business or something you’re walking into with rules and requirements in order to participate, I think you should follow that regardless of your (beliefs),” he said. “While I’m participating in a space you own and control, I don’t think it’s wise use of time to go ballistic and throw a scene.”

Ahmed added, “once I leave that event, as long as I’m not breaking the law or putting others in a liability, I don’t think others should come and police you.”

When asked how his opinions pertain to the USU policy, Ahmed said students should follow it if they want to take classes in-person.

“We here on campus are trying to create a safe environment, so you would need to wear a mask to be on campus,” he said. “If you don’t want to, you don’t have to be here; you can do most of those classes online or in a hybrid format.”

Ahmed said despite criticism, masks are a way to help restore campus activity normalcy while limiting the spread of the virus.

“We’re doing the best we can to bring things back to campus. Things aren’t going to look normal, but we have the interests of the students, faculty and everyone in mind,” he said. “We care about classes and having campus be open and some of that comes with a sacrifice that we all have to do in order to keep going forward.”