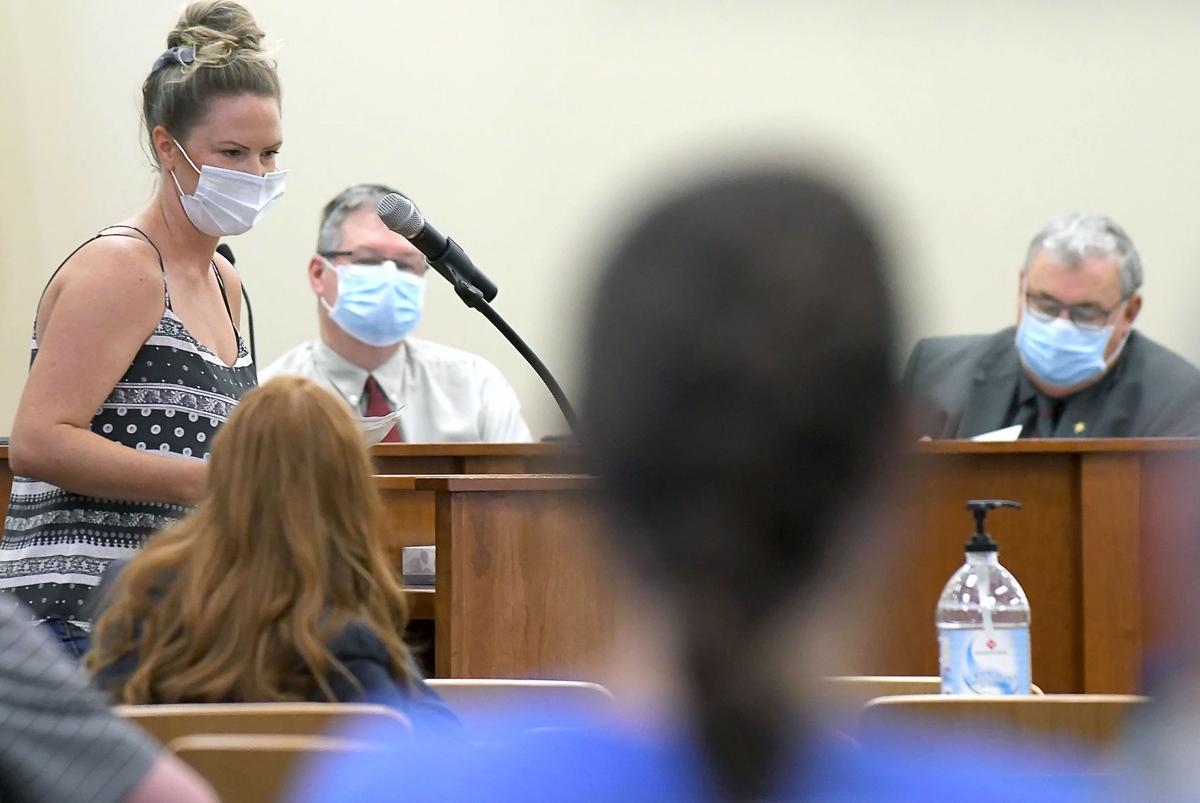 Angela Carter speaks during a public comment period at the Cache County School Board meeting on Tuesday, concerning the plan for opening of schools. 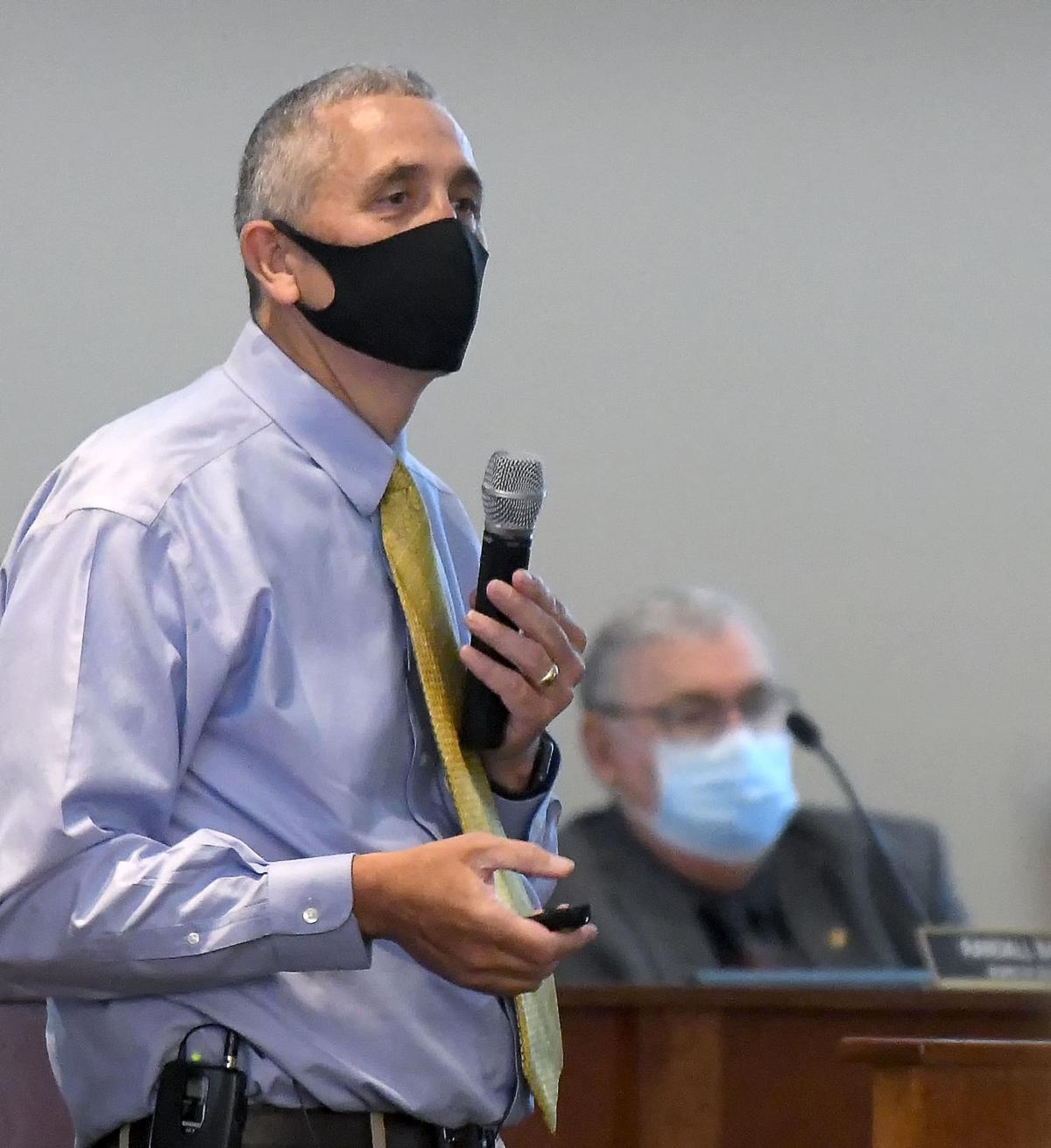 Tim Smith presents a plan for opening schools during the Cache County School Board meeting on Tuesday in North Logan.

Angela Carter speaks during a public comment period at the Cache County School Board meeting on Tuesday, concerning the plan for opening of schools.

Tim Smith presents a plan for opening schools during the Cache County School Board meeting on Tuesday in North Logan.

NORTH LOGAN — Teachers and parents turned out to listen to a proposed plan for reopening the Cache County School District (CCSD) for the 2020-21 school year and voice their concerns Tuesday evening at the Legacy Campus technology building.

There were approximately 40 people in attendance, and 16 of them addressed the eight members of the Board of Education and the superintendent with concerns, questions and thankfulness about how the district was handling the COVID-19 pandemic and plans for dealing with it going forward.

Key elements in the draft plan include a 45-minute reduction to the school day and an online option for parents not wanting to send their kids to school.

After the public comments, the board decided to wait on a vote. The state requires a plan from each district by Aug. 1. The board wanted some time to think about comments made and study the plan before making a final decision on whether to open schools in the district on Aug. 20, which was originally scheduled.

The next board meeting is scheduled for Thursday, July 30, at 5:30 p.m. Smith expects a decision will be made then as the date to turn something into the state will be looming.

Everyone that showed up for the meeting wore face coverings and kept their emotions in check, which was noted by several board members after the public comment period.

“I want to let the public know how much I appreciate you coming here, teachers and parents,” said Chris Corcoran, a board member. “I could not have asked for a more respectful, constructive discussion from those of you that participated in this meeting. I am grateful for your comments. They have been so helpful. I really appreciate your participation.”

Norton stressed the importance of working together. He said each family needs to join him in doing what is best for the children.

“We as a community need to get control of this virus,” Norton said. “We need to come to the conclusion of how we can make that happen. ... It does help to wear masks. The evidence is out there. Let’s not make it a political issue, but a community issue.”

The superintendent asked people to read a study that just came out from BYU on wearing masks. He also referred people to an opinion piece in the Desert News about how the state of Utah needs to come together to help secure the safety of everyone by Labor Day.

“Don’t we all want that? To know that all our grandmas and grandpas and parents are safe and that our kids are having a good experience in school,” Norton said. “That’s what we all want. But you have to work for it.

“... I have grandkids that go to school in this district and a daughter that teaches in it. I’m not opening schools if it is not safe to do so. ... We are not going to put people in jeopardy. We need your support.”

Several times Norton asked parents to work with him and not send children to school if they were sick.

“I need a contract with all parents,” Norton said. “You don’t send your kids to school sick, and I promise as a school district that we’ll give them the very best education. If they end up being sick during the school year, we will give them a quality education with the same teacher at your home. If you don’t want to come because you just can’t work it out right now, we will give you an online experience that won’t be like (last) March.”

Teachers and parents stressed getting back to school during the public comment time, but there were worries about social distancing and the wearing of masks, which children will be asked to do. Some brought up a soft opening, with options of a half day of school. Others were against that and wanted school to get back to normal.

DeSiree Stodart, a teacher at North Cache Middle School, brought up the fact that some schools don’t have air conditioning — along with several other teachers — and wearing masks is going to be interesting. She also brought up her age.

“I turn 65 and think I still have something to give,” Stodart said. “My age says I’m high risk. ... I know there are a lot of hard questions to try and figure out what we should do. We need to social distance, but I have 30 chairs and can’t put them 6-feet apart. I’m kind of at a loss.”

There was some frustration with how online will work if that ends up being the future for some children. While 5,000 Chromebooks were checked out in the spring, some students went without or had no Wi-Fi to be able to use them.

Sharing supplies and textbooks was also a concern that was brought up. Most were worried about the safety of teachers but also the mental health of children needing to get back to school.

“When school closed last March, my world turned upside down,” said Wendy Falslev, a parent of five daughters. “... I have a second grader that is very social. These kids need each other. I know this virus is real, but I’m worried we are becoming a society of germophobes.”

Rhoades pointed out there are 26 schools in the district and each is unique in its own way. The plan that was discussed is broad and gives each school the ability to adapt what works best for it. Of course there are some general guidelines that will need to be followed by everyone, like face masks.

Smith said the district sent surveys out to parents and employees. He called the feedback “unprecedented.” More than 6,800 responded, which is 90 percent of the homes in the district — however one parent questioned that number during the comment section as a possible online hack by someone pushing a certain agenda. About 1,500 employees responded.

The concerns that came up about the 19,000 children in the district were: Face coverings, children coming to school ill, school cleaning, social and well being of the children, the availability of online if the school doesn’t resume in the classrooms and the normalcy when children come back. Employees had similar concerns with the addition of taking time off when sick, class sizes and protecting the high-risk employees.

More will be discussed next week before a final decision is made.