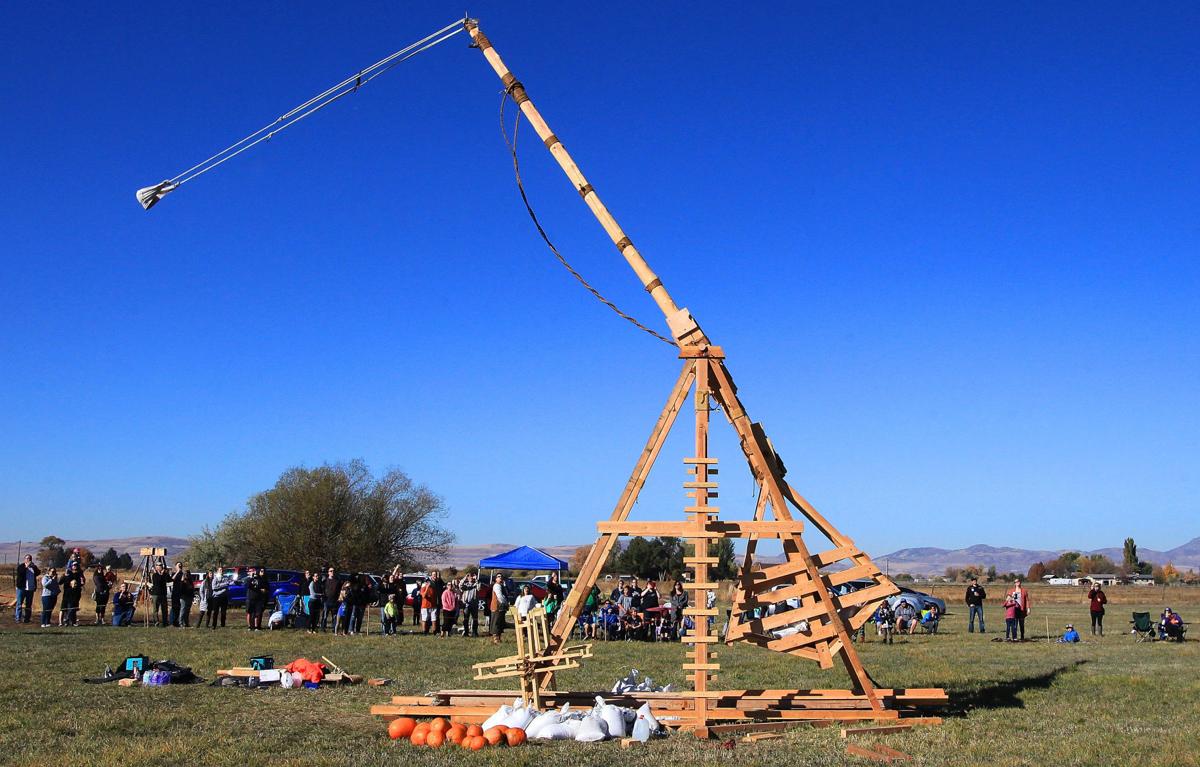 A half-scale Medieval trebuchet launches a pumpkin in Benson during a demonstration by a Utah State University history student in 2018. Daniel Bertrand is building a new version and hoping to compete in Punkin Chunkin in Aurora, Colorado. 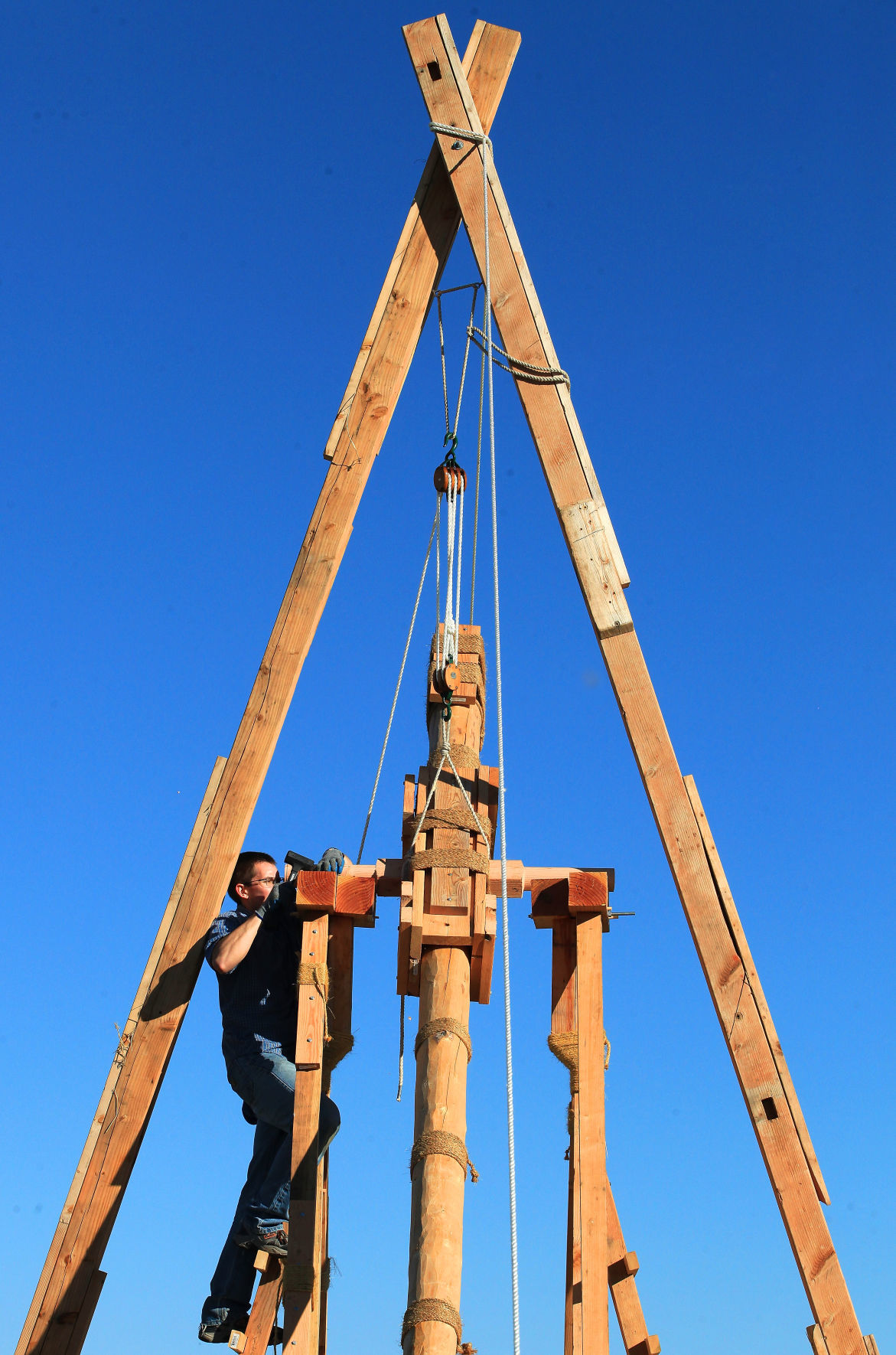 Utah State University student Daniel Bertrand works on the axle mounted to the throwing arm a half-scale replica of a Medieval trebuchet in 2018.

A half-scale Medieval trebuchet launches a pumpkin in Benson during a demonstration by a Utah State University history student in 2018. Daniel Bertrand is building a new version and hoping to compete in Punkin Chunkin in Aurora, Colorado.

Utah State University student Daniel Bertrand works on the axle mounted to the throwing arm a half-scale replica of a Medieval trebuchet in 2018.

A pumpkin hurtling through the air for 300 meters using medieval technology is how a local historical researcher and medieval siege engineer hopes to demonstrate the awesome power of medieval engineering techniques.

Daniel Bertrand and the Medieval Trebuchet Team is currently raising funds to rebuild and take one of the largest historically accurate trebuchets to the national stage in September.

“I want to show what just historical building techniques can do,” Bertrand said.

While a history student at Utah State University, Bertrand did extensive research on medieval construction and found the trebuchet was the frontline artillery. He attempted to keep the machine historically accurate by looking at multiple books and drawings on medieval weapons.

“It’s kind of a Frankenstein’s Monster of medieval sources,” Bertrand said. “It’s inspired by, you know, this French engineer’s drawing or this notebook from the Middle East. It is definitively grounded in the history side of things”

Last year’s machine, The Black Widow, was 33 feet tall and hurled a bowling ball approximately 300 yards. After The Black Widow was destroyed in an experiment with throwing fireballs, Bertrand and the team are rebuilding the machine and naming it The Mark III.

“It still has some of the same pieces from the previous years but you fix what needs to be fixed,” Bertrand said. “It’s just sort of part of the engineering design process.”

The Mark III will have a new throwing arm made with a new larger, sturdier tree. It will also include hardwood axles instead of softwood axles.

“Last year the tree was one of the things that cracked on us,” Bertrand said. “This year, you know, we have a chance to do it right and actually show what this thing can do, hopefully.”

The team’s goal is to take the trebuchet to Aurora, Colorado, to compete in this year’s Punkin Chunkin. Bertrand said that even though they may not win going head-to-head with modern engineering techniques, they hope to demonstrate how sophisticated and effective medieval engineering is.

“If we can get there and perform and pull our weight and kind of show that medieval stuff works and it’s just as cool,” Bertrand said, “really I think we can surprise people. A lot of the guys I talk to go, ‘What? You’re using wooden axles? Like, that would never work.’ It does and it did.”

Raising the funds to rebuild the machine and cover the cost for the trip is one of the harder aspects of the project, according to Bertrand.

“Once we have some money to do things, we love being out there and working on it,” Bertrand said. “We definitely want to make sure the public has a chance to be involved with it.”

Once the Mark III is built, Bertrand hopes to give the community more access to it. He plans a free public demonstration on Saturday, Sept. 7, at 4800 N., 2400 West in Benson.

Bertrand said donors will have the opportunity to turn the windlass during a reloading of the machine or pull the release cord on a launch.

“It makes all these sounds and groans,” Bretrand said. “It’s so much better than the CGI Tribuchets in the movies.”

For more information or to donate funds, visit gofundme.com/f/medieval-trebuchet-goes-punkin-chunkin.