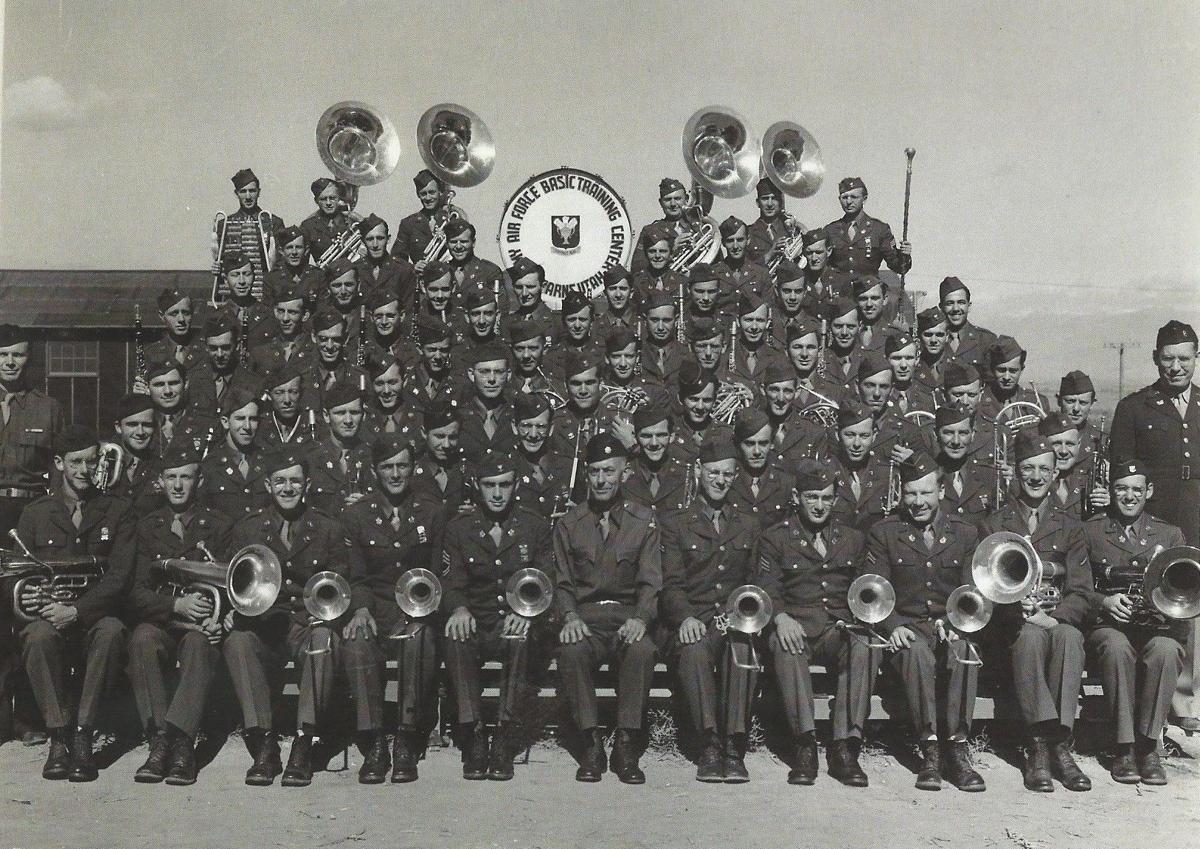 Max Dalby, pictured on the second row down from the top between the two Sousaphones, poses with his Army Air Force Band company in Kearns, Utah. His friend, Richard Burt, is not pictured. 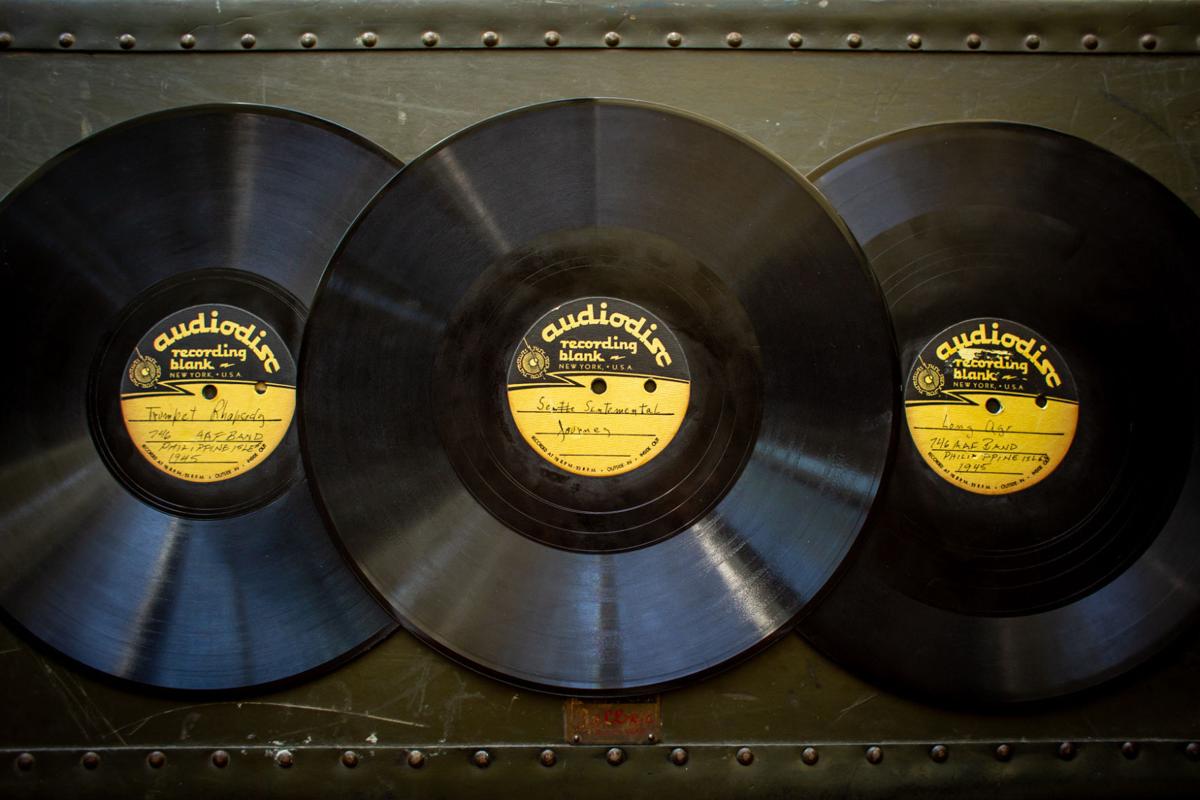 The original vinyl records that contain the songs recorded by the 746th Army Air Force Band during WWII are seen in this photo sent in by Jason Burt.

Max Dalby, pictured on the second row down from the top between the two Sousaphones, poses with his Army Air Force Band company in Kearns, Utah. His friend, Richard Burt, is not pictured.

The original vinyl records that contain the songs recorded by the 746th Army Air Force Band during WWII are seen in this photo sent in by Jason Burt.

Without Max Dalby, the man who would later go on to found the Utah State University Alumni Band, Richard Burt’s military career could have been spent fixing outhouses rather than doing what he loved — playing music.

When Dalby was stationed at Camp Kearns in Salt Lake City during World War II, he took notice of the extraordinary trumpet-playing abilities of the friend he grew up with and recommended to his commanding officer that Burt play in the 746th Army Air Force Band.

“To this good fortune, I owe my thanks to Max Dalby,” Burt said in a 1984 oral history session.

After basic training at Kearns, Burt — without Dalby — went on to play trumpet in the Philippines and help produce what may be one of the only known recordings of a military band on the front lines of war.

And now, the music of the band, in an album titled “Sentimental Journey,” will be released next week to coincide with Veterans Day, thanks to the efforts of Jason Burt. He is the late Army man’s grandson who worked with four-time Grammy-award-winning sound engineer Gavin Lurssen and Japanese sound engineer

Hiroyuki Sanada to master and digitize the decades-old recordings.

“The general idea of the project is, we are going to release a never-before heard album that was made 75 years ago in the Pacific by regular World War II army bandsmen … and attempt to make these veterans (into) platinum artist(s) by selling a million albums,” Jason wrote in an email to the newspaper.

The album begins and ends with the narration of Richard Burt, who died in 2016. But in between are 10 recordings of songs such as “Moonlight in Vermont,” the state’s unofficial song; “If You Are But a Dream,” “Tea For Two,” “Perdido” and the title track, “Sentimental Journey.”

Mariann Lucy, a USU alumna and the daughter of the late Dalby, praised the project in an interview with The Herald Journal.

“I think it’s an amazing thing to think they actually recorded back then — this actual Army band playing,” Lucy said. “And now, he (Jason Burt) has engineered it to be released. I really hope that it will be an iconic moment for musicians and those great soldiers of the time.”

Craig Jessop, former dean of USU’s Caine College of the Arts who conducted military bands during his time in the Air Force, commented on the recording, too, noting that there are many like it that were made during the war, including those produced by the late Glenn Miller.

“All of those recordings were important in the defense of the nation by supporting troop morale and welfare, recruiting, public relations and national patriotism,” Jessop wrote in an email. “Military bands were and are vital to these programs today. I’m sure that the recording you refer to was also valuable to the war effort.”

Before America’s involvement in WWII, Dalby and the elder Burt knew each other as friends at West High School before attending Brigham Young University together.

But after the attack on Pearl Harbor thrusting the U.S. into the war, Burt said his grandfather believed his musical endeavors would have to be put on hold.

“That’s why he actually contacted Max Dalby, because he knew Max was in the band over at Kearns, and that’s where he was going for his basic training,” Jason said.

The elder Burt phoned Dalby and gave him his serial number. Dalby passed it over to his commanding officer in the band unit.

“That’s what got my grandpa into the band,” Jason said. “So without Dalby’s intervention, he definitely would have been doing something less desirable to him.”

Jason had the privilege of interviewing his grandfather about his life, including his interactions with Dalby.

“He always considered Dalby a really good friend and someone who changed his life,” said Jason.

Lucy, who consulted Dalby’s autobiography during the interview, said it doesn’t surprise her that her father would recruit someone with Richard Burt’s talents.

“He (Dalby) has a legacy of finding people and bringing out their talents and putting them to use and to work in music performance groups,” she said.

Dalby and Burt went off to different assignments after Kearns. While Dalby went to conduct the 249th Army Ground Forces Band in the Canal Zone, Panama, Burt was sent down to a base Riverside, California, where Jason said all the big-name military musicians were.

“Guys who were in nationally known swing bands and guys who were musicians for the Hollywood recording studios — that’s where they were playing,” Jason said. “His whole life, he was first chair … but down there at March Field, he was third chair, so he was learning from the best.”

Next came the Philippines, where Richard Burt was assigned to play with the 746th Army Air Force Band — not to go in combat, though being in a military band at that time was not without its risks.

“There are stories on the album that talk about close calls,” Jason said. “They were quite literally a frontline band because sometimes they’d play and the fighting would be right behind them.”

Richard Burt was allowed by his commanding officer to keep the recordings, which sat up in his attic until his grandson, Jason, found them.

After the war ended, the elder Burt and Dalby never played together again, and they weren’t as close as they once were because their careers took them to different places, Jason and Lucy told The Herald Journal. Dalby died in 2005.

Lucy said that Dalby was a “huge fan” of military bands.

“When he was doing his own band concert or the alumni band, there was always … patriotic music. It was really important for him to keep that spirit of the symphonic and the marching band,” Lucy said. “I was under the impression that military bands were the biggest inspiration for band directors of public schools and universities. That’s the impression I got from my dad — and I know a lot of band directors.”

She said her father would have loved the “Sentimental Journey” album if he had that chance to listen.

“Music touches most of us, right? There’s hardly anyone who is not moved by music and soldiers getting together and playing,” she said. “I think he would be thrilled to know of the recording and very proud of Richard Burt for making it and of Jason for bringing it back to life. Dad loved military bands!”

“Sentimental Journey” is available for purchase on the Apple iTunes store starting Nov. 11, Amazon, or the band’s website, https://746thfeaf.com/music.