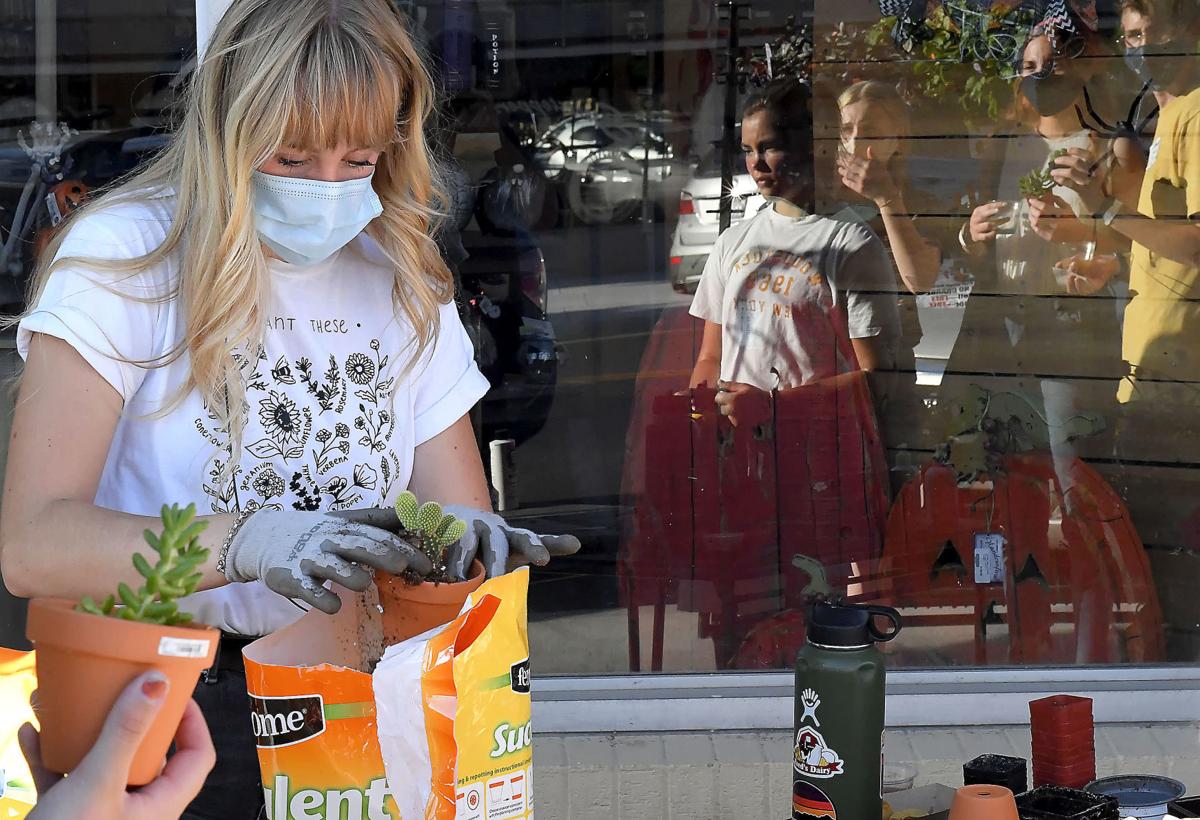 Cady Albiston pots a plant at Anderson’s Seed and Garden for USU students during the Explore Downtown event on Thursday. 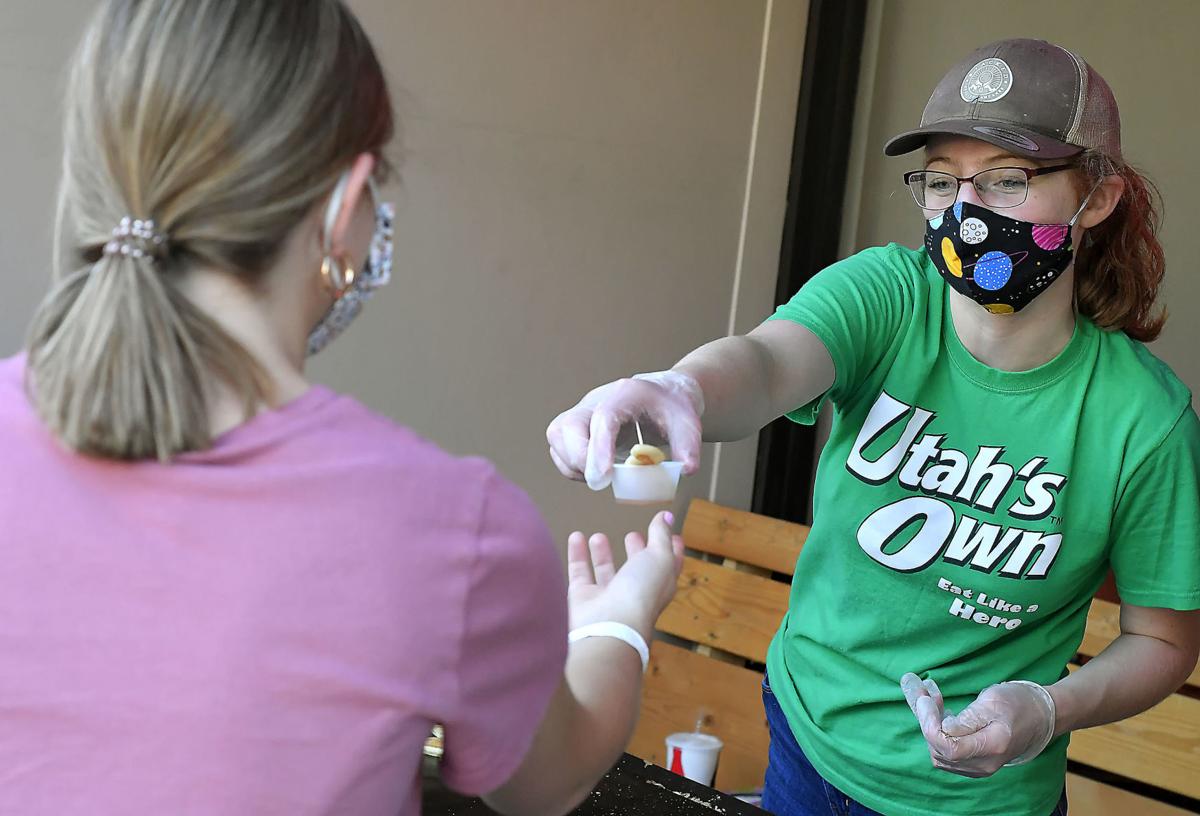 Christine Huffman, right, hands out pancake samples from Stacked to USU students during the Explore Downtown event on Thursday.

Cady Albiston pots a plant at Anderson’s Seed and Garden for USU students during the Explore Downtown event on Thursday.

Christine Huffman, right, hands out pancake samples from Stacked to USU students during the Explore Downtown event on Thursday.

Fall sports were one of the first COVID-19 casualties for the 2020-2021 school year at Utah State University. The fate of many other Aggie events hangs in the balance of how well USU handles students’ return to campus, but several key “Connections” events for freshmen have survived.

The Connections, or USU 1010, class is meant to introduce students to both the school and community, and several events, such as Explore Downtown, welcomed new students to the area — though with modifications to mitigate risk of spreading the virus.

“I feel like students are excited to have the opportunity to progress,” said Spencer Bitner, director of Student Involvement at USU. “I think a lot of seniors from high school are discouraged, you know, about not having their graduations in some instances, and having to go home and not really experiencing that. So I think they’re ready to experience life.”

Students explored several highlights along Main Street, Center Street and Federal Avenue with others from their classes and residences. Though the former Taste of Logan was originally held just one night, it was spread over Wednesday, Thursday and Friday due to the pandemic.

Some businesses chose not to participate, and others, like Locker 42 — which used to invite students to try their hand at mechanical bull riding — scaled back their offerings. Others upped the ante and gave students extra swag to welcome them to the community.

Even through the masks — a requirement for both USU’s campus and in the city of Logan, until Aug. 30 — nearly every student who participated found the event fun.

The ultimate event of Connections, the Freshman Luminary walk, was another orientation highlight school officials wanted to preserve.

“We were prepared all summer long that we might have to make some changes” said USU spokesperson Emilie Wheeler, “and so, in wake of all of the other institutions around the nation that have had to close so quickly after reopening, we decided that we would pivot to Plan B, which had been in the works.”

Rather than the traditional walk from the Quad to the Spectrum — a foreshadowing of the same walk students would perform at graduation — students spread across campus. The “pods,” determined by students’ Connections group, were positioned in 88 groups to hear messages of encouragement broadcast before students released their lanterns to meet the blue glow of the “A” on Old Main tower.

Though the changes seemed to roll out every week, trying to keep some semblance of normalcy was crucial, according to Bitner.

“Some of these students have family who are alumni, and they’re sending their children here as first year students, or those returning,” he said. “And a lot of that tradition is what people describe as high points in their college experience. And so what we do is we try to curate those experiences.”

This was appreciated by many incoming freshmen wandering downtown on Thursday, including Mae Tateoka, from Waukesha, Wisconsin, who said the community-feel of the college-town university was a big draw.

“My mom and my dad and my sister all graduated from here,” she said. “My sister said orientation was really, really fun here, and they did a lot of stuff. They have like the lanterns, or the luminary night, which is really, really cool, and True Aggie Night was another really cool one that my mom was really excited for me to experience.”

Tateoka and her friends were also looking forward to The Howl and said they’d be disappointed if it, too, falls to COVID. But as of now, the university has not approved of any plans to go forward with the controversial Halloween dance or True Aggie Night, which among other things involves a traditional student kissing ritual on the Block A next to Old Main.

“We obviously don’t want to lose traditions, but also, our goal is to keep campus open, keep students safe,” Bitner said, “so we need to adjust.”

Bitner added while many events have been cancelled, postponed or held virtually — like the College of Humanities and Social Science’s annual Light on the Hill ceremony to be held Tuesday — this is hopefully just one year of precautions that students can make up in the future.

This was the same thought process of Jake Gordon, who was disappointed to learn the football and basketball games he’d dreamed of attending as an Aggie would not occur this year.

“I’m personally not a big fan, but I see why we’re doing it,” said the Orem native. “I’m really bummed.”

Drew Larkin of St. George agreed but said he won’t let it dampen his experience at USU.

“I’d say it is disappointing to hear the events are canceled, but it’s not the point now, where we’re here to get a college education,” Larkin said. “So, you gotta do what you gotta do and just hope that in the future, things will open up more, and we’ll be able to do more things together as a student body.”

Bitner added several other student favorites are still in the works, such as high-stakes bingo night, and there are plans to hold a drive-in at the stadium in the next couple of weeks.

While USU has been lax on letting non-students attend events in the past, the public won’t be invited to many events this year due to the virus.