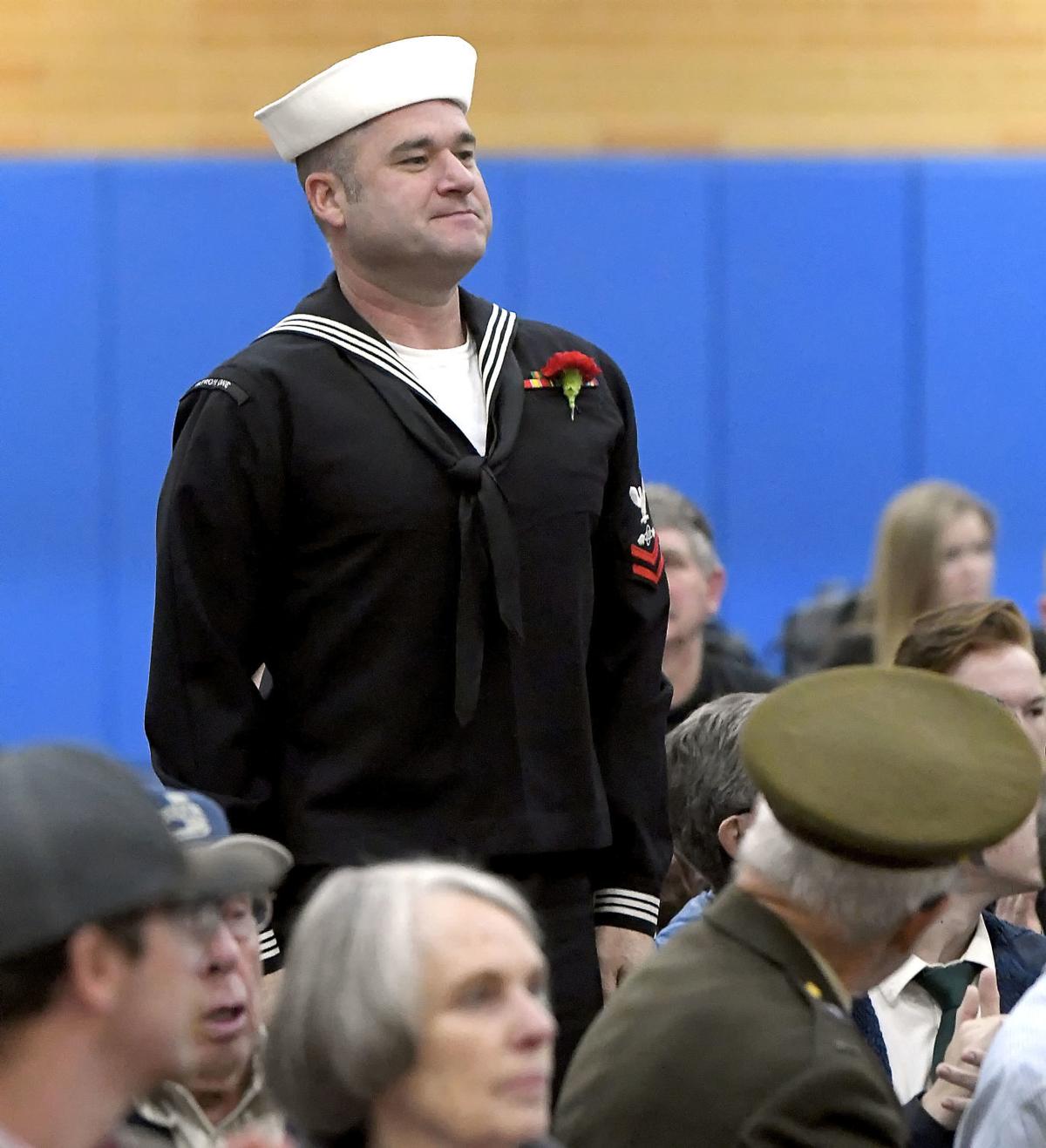 Retired Petty Officer 2nd Class Justin Pocock stands to be recognized during a Veterans Day assembly on Monday at Sky View High School. To view more photos from the event, go to hjnews.com. 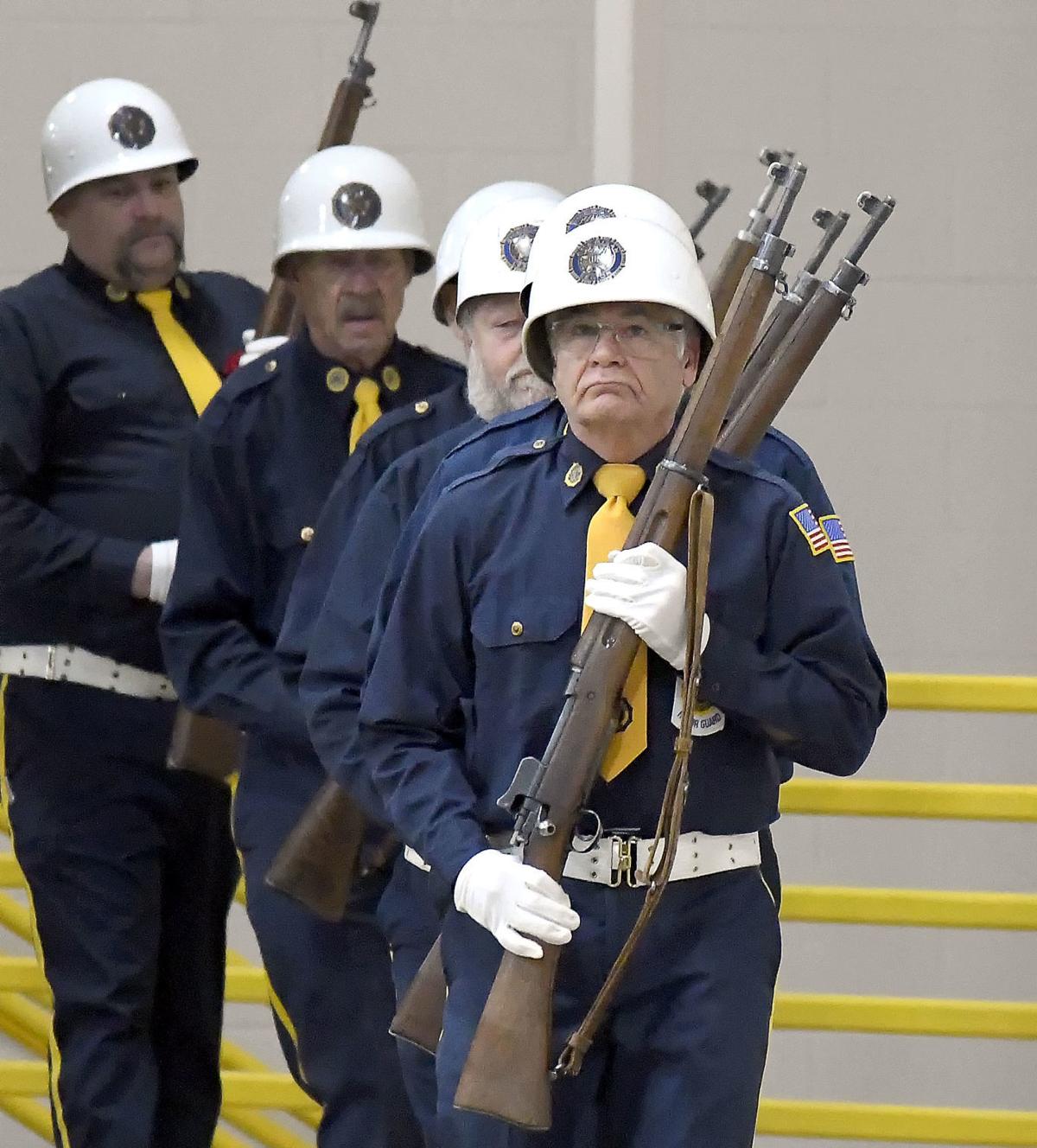 Members of the American Legion perform a 21 Gun Salute during a Veterans Day assembly on Monday at Sky View High School.

Retired Petty Officer 2nd Class Justin Pocock stands to be recognized during a Veterans Day assembly on Monday at Sky View High School. To view more photos from the event, go to hjnews.com.

Members of the American Legion perform a 21 Gun Salute during a Veterans Day assembly on Monday at Sky View High School.

“It has turned into a unique tradition here at Sky View,” said Natalie Tueller, one of the teachers at SVHS in charge of the assembly. “That feeling of honoring those who have given us what we have is the constant underlying motivating force for this assembly.”

It was that same feeling that led Willard “Soup” Jessop to create this assembly so many years ago.

Jessop, sporting the same uniform he wears every year on this day, held out a faded and yellowing piece of lined paper with five names on it. Three of them were his former students, one lived just a mile or two from him and the last name was a student after Jessop had retired. All of them were students at SVHS and all of them died in combat.

“I can still remember right where they sat in class,” Jessop said. “The toll of war is so real, and I felt like we needed a way to honor their life and sacrifice.”

Around 1968 the assembly started out with just a few veteran faculty members singing songs. At that time around 70 percent of the staff were World War II veterans.

Now, the assembly features the orchestra, band, choir, guest speakers and a slideshow of pictures that students and faculty gathered of veteran family members.

“They have made sacrifices so we don’t have to wake up to the sound of gunfire,” said Col. I. Marlene Summers, the guest speaker. “We are able to sit here today because of the freedoms these people have given us.”’

Summers shared with the audience stories that have touched her and motivated her since she began her military career, enlisting in the Army Reserves in 1975.

“This event today shows that this school has got the message about respecting and recognizing the freedoms we have,” Summers said. “This is so well done, I have never seen anything like it.”

Iraq veteran Tiffany Hamilton comes from a long line of veterans. As she sat next to her two daughters, both working to be in the Air Force one day as fifth generation soldiers, tears streamed down her face.

"It was amazing," Hamilton said. "There is no question why they won awards for this assembly."

Freedom Foundation at Valley Forge, an organization dedicated to educating Americans about patriotic citizenship, recognized SVHS as a national winner of the George Washington Honor Medal. This is an award presented to remarkable and longstanding Veterans Day assemblies. SVHS will be honored at an awards banquet in February.