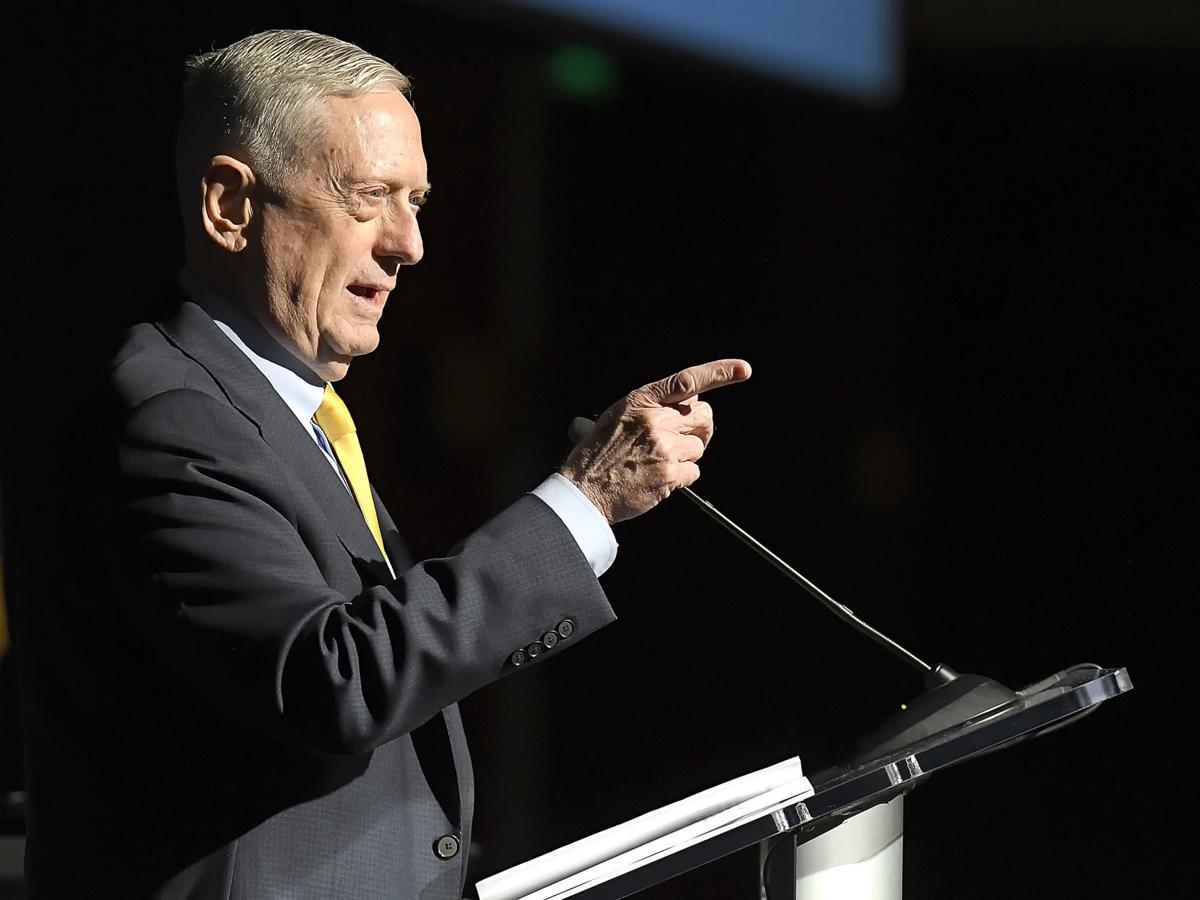 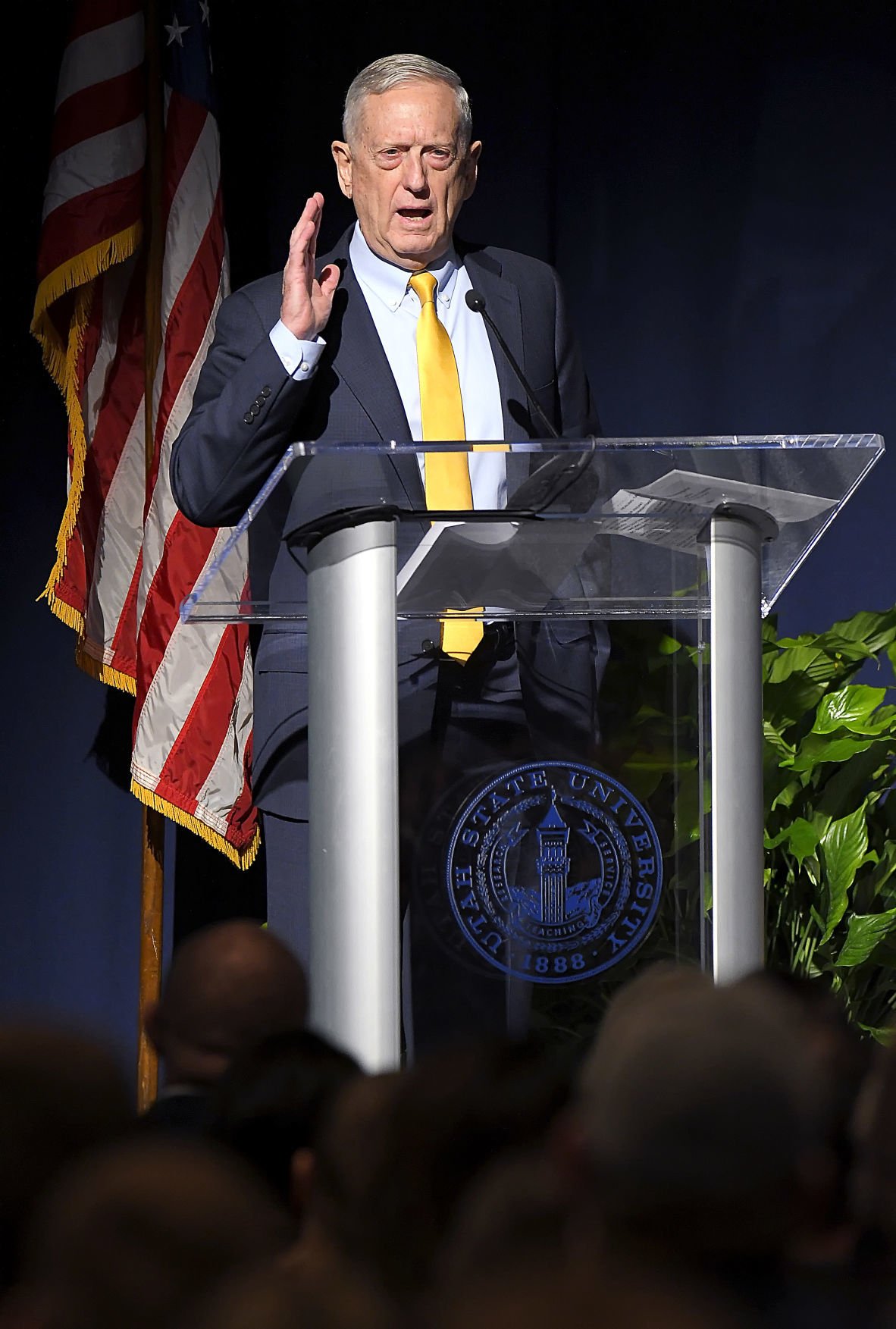 As Mattis began his speech in the TSC Ballroom, a young man holding a sign that said “War Profiteer” began shouting before being escorted out by security.

Mattis, known by some as the Warrior Monk, handled the situation with the same grace found in his now-famous letter of resignation to President Donald Trump, in which he criticized the administration for what he saw as disloyalty to America’s allies. In the months leading up to his resignation, Mattis had been at odds with the president over the decision to abruptly withdraw U.S. troops from Syria.

“I love the idea that we can do it (protest) right here in the Cache Valley,” Mattis said. “Because I guarantee you tonight in Hong Kong, those young kids over there fighting for their freedom and waving American flags don’t have the right to do that, and so we should all be very proud that we heard that here today.”

According to Jeannie Johnson, the director and co-founder the Center for Anticipatory Intelligence at USU, which hosted the convocation, Mattis actually met with the protester after the convocation. He shook the young man’s hand and listened to what he had to say.

“One of the remarkable things about him is that he is a genuine bridge builder between the parties, and between just regular Americans,” Johnson said. “He’s just a reminder to us of the kind of value system that makes us strong when we’re able to establish community with each other.”

Some of Mattis’ primary messages to the audience were to learn history, listen to one another and build connections, as well as keeping faith in the United States and the military.

“We’re the good guys, but we’re not the perfect guys,” Mattis said.

Throughout the convocation Mattis referred to the United States as “the American experiment.”

“We’re an experiment, just a great big experiment,” Mattis said. “We have no divine right to survive. Bottom line is we’ve all got to roll up our sleeves and make this experiment a success by never accepting where we’re at. Always trying to be a better country, a more just country, a more responsive country.”

Mattis answered a few questions after his remarks. He gave his opinion on how to engage average citizens in politics, his decisionmaking process, restoring the confidence of allies, and his position as the former secretary of defense.

According to Mattis, the hardest part of his position as secretary of defense was deciding whether or not to deploy troops.

“I hand-wrote out a card and taped it … with a question,” Mattis said. “It said, ‘Does this deployment contribute sufficiently to the well-being of the American people that it justifies the death of these troops?’ Not ‘going in harm’s way,’ not ‘possibly getting injured.’ could I justify the death of those troops … I hoped that I could answer that question in a way that I could live with.”

He also addressed high school students during the Q&A, encouraging them to try to remain optimistic about the state of affairs in the U.S.

“I think one particular advantage of having Mattis here at USU … for the high school students that were able to come, is that we’re providing them with a real-life example of somebody who truly can be a civil, thoughtful, intellectual, deeply good person,” said Briana Bowen, program manager and co-founder of the Center for Anticipatory Intelligence. “There is such wild penetrating cynicism about the political system right now, and there aren’t a lot of examples that really provide a lot of contrast.”

Over 1,300 people were able to listen to the convocation in the ballroom, and those who were unable to get a seat could listen to the speech via livestream.

“We’re estimating that at least 1500 people congregated … That’s just a huge outpouring of support and interest,” Johnson said. “The air was just electric, it was so much fun.”

A video of the convocation can be found on the CAI homepage: https://cai.usu.edu/.