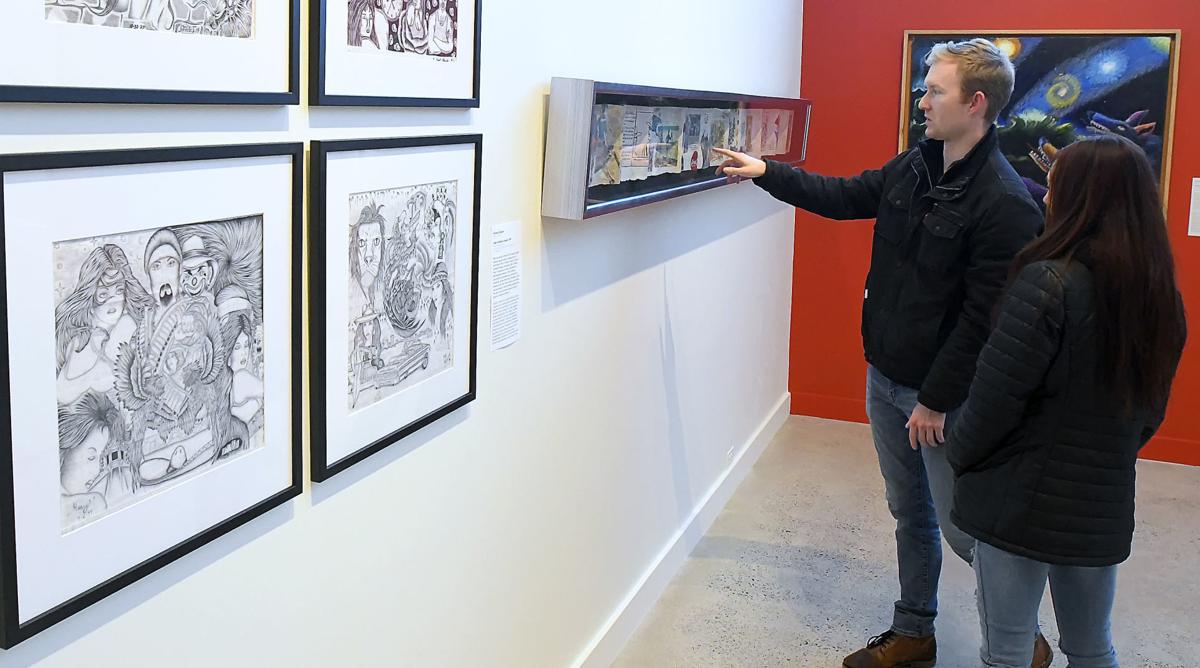 Joseph Pitt and Kyleigh Zoglio look at a Latinx art exhibit at the Nora Eccles Harrison Museum of Art on Jan. 17, at USU.

Joseph Pitt looks at a Latinx art exhibit at the Nora Eccles Harrison Museum of Art on Jan. 17, at USU.

Joseph Pitt and Kyleigh Zoglio look at a Latinx art exhibit at the Nora Eccles Harrison Museum of Art on Jan. 17, at USU.

Joseph Pitt looks at a Latinx art exhibit at the Nora Eccles Harrison Museum of Art on Jan. 17, at USU.

A varied selection of artwork created by Latinx artists is currently on display at the Nora Eccles Harrison Museum of Art at Utah State University.

The exhibition, entitled Latinx from the NEHMA Collection, features work from artists such as Yolanda Gonzalez, Leo Limón, Paul Sierra and Eloy Torrez, in addition to a grouping of paños, artworks created on handkerchiefs by artists incarcerated in Texas penitentiaries.

The exhibition was co-curated by Alvaro Ibarra, a USU art history professor, and Bolton Colburn, NEHMA Curator of Collections and Exhibitions.

“Different sort of sub-groups have … latched onto this term (Latinx) for lots of different reasons,” Ibarra said. “Really the spirit of ‘Latinx,’ at least from the exhibition and certainly a lot of recent scholarship, is inclusivity instead of exclusivity.”

To coincide with the intended spirit of inclusivity, every art piece’s plaque in the exhibition gives information in both Spanish and English to accommodate a wider variety of museum patrons.

According to Ibarra and Colburn, the artwork was selected with an audience that may be unfamiliar with the concept of “Latinx” and Latinx artists in mind.

“For me it was just selecting the ones that I felt were going to be the most evocative, the most accessible … to students who don’t necessarily have a background in this kind of art or this culture,” Ibarra said. “But nevertheless it would be pieces that were evocative, that they would find interesting, that they could find a … connection.”

Colburn said works in the exhibit can be fairly accessible, and people tend to spend a lot of time with particular works.

“It’s not predicated on some arcane academic dialogue,” Corburn said. Rather, the work connects with patrons because it’s from “Latinx artists that are part of their community.”

Each piece on display comes from NEHMA’s permanent collections of artwork both acquired by and donated to the museum.

NEHMA’s permanent collections include more than 5,000 works by nearly 2,000 artists, with an emphasis on the Western U.S., according to the museum’s website.

The Latinx from the NEHMA Collection exhibition began in August of 2019 and will close on June 30. Admission is free.

Latinx is a gender-neutral term for a person of Latin American origin or descent.

“You may wonder why 'Latino' isn't sufficient or good enough … 'Latino' is masculine, and in Spanish we see the term used even in groups that are comprised of men, women, and non-gender peoples,” states the USU Latinx Cultural Center website. “The 'x' in 'Latinx' is a kind of place holder to be filled in by the person who reads or hears it. It is an open-ended term that signals inclusivity and invitation.”