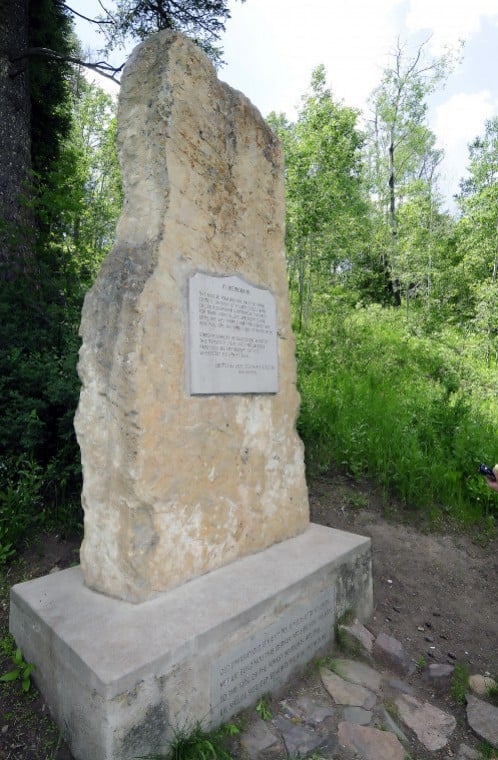 A marker the same height as Old Ephraim, the famous grizzly bear, stands near the site where he was killed in Cache National Forest. (Eli Lucero/Herald Journal)

A poem about Old Ephraim is engraved on the monument at his gravesite in Cache National Forest. (Eli Lucero/Herald Journal)

A marker the same height as Old Ephraim, the famous grizzly bear, stands near the site where he was killed in Cache National Forest. (Eli Lucero/Herald Journal)

A poem about Old Ephraim is engraved on the monument at his gravesite in Cache National Forest. (Eli Lucero/Herald Journal)

Clark told his story to Thompson's Scouting group when Thompson was around 14 or 15, he said, and Clark was in his 70s.

"Frank Clark wasn't a very big man," Thompson said. "He was a very meek, very mild, very humble man. Just the typical, what would you say, salt of the earth."

Not only was Old Ephraim the largest Utah grizzly bear on record, he was probably also the smartest and stealthiest, said professional storyteller Daniel Bishop.

"He was only actually seen by a few people," Bishop said. "But he managed to do quite a bit of damage to the sheep population."

But Clark, who herded sheep in Logan Canyon, was sick of seeing his flock become the bear's lunch and tried for years to trap him, setting traps in the bear's favorite wallows and then covering them with mud and silt so the place looked undisturbed, Bishop said.

"That trick worked on many a bear," Bishop said. But not on Old Ephraim. Bishop said Clark's nemesis "would pull the trap out of the wallow or out of the stream without setting it off," setting the trap to the side so he could then use the wallow.

"Frank was out at his camp, when he heard Old Ephraim yell, which he said was one of the most frightening sounds he'd ever heard in his life- he couldn't tell if it was animal or human," Bishop said. "He took his rifle and his dog, and then, without bothering to put his pants on, went out in his undies and came face to face with the biggest bear in Utah at the time."

Bishop said the old bear was either extra tired or had gotten a little careless, and stepped right into one of the Clark's traps. But even with one leg clamped to the heavy iron trap, the fight wasn't over yet.

"The bear was smart enough to know who did it - and came after Frank," Bishop said. At that point, it was either Clark or the bear, and Bishop said it took Clark seven shots with his rifle to finally bring the legendary carnivore down.

A group of Scouts later erected a monument near the site of Old Ephraim's demise, which today bears this subscription by Nephi J. Bott:

Yet we build you this marker and sing you this song;

To the king of the forest so mighty and tall;

We salute you, Old Ephraim, the king of them all."

Now the grizzly's final resting place amongst the quaking aspen and lupine meadows of the Uinta-Wasatch-Cache National Forest can be reached by foot, mountain bike, four-wheeler, or, in the dry summer months, by any regular car, Stokes Nature Center board member Jim Akers said, who has ridden there on his mountain bike.

According to the 2004 Cache Trails handbook by Jim Sinclair, the hike to Old Ephraim's grave starts at the Willow Creek trailhead up Right Hand Fork in Logan Canyon, following the original wagon road to Bear Lake, then cuts off to the right in a separate trail marked "Ephraim Cutoff Trail."

For those who don't have the stamina for a 12-mile round trip hike, a well-maintained dirt and gravel road leading to Old Ephraim's grave snakes its way from Logan Canyon's Temple Fork turnoff, through 9.8 miles of pine and aspen forests interspersed with sweeping alpine meadows of yellow mule-ear flowers.

Akers said in the late summer months, when conditions are dry, "any sedan could get there," but conditions can be quite muddy in spring and early summer. This year, the road was dry and in good shape as of July 6, and although a mini-van could make it, four-wheel drive would be helpful along some of the steeper parts of the narrow gravel road.

It's on backcountry roads like these that Thompson and his friend John Sweigart, 65, like to spend their days riding through the mountains on Thompson's red Polaris Razor ATV.

"This is so beautiful to me, I don't have the vocabulary to explain it to people," said Sweigart, who moved to Smithfield from California about five years ago.

But because he doesn't want Cache Valley to get too overcrowded, he keeps the beauty of Bear River range to himself.

"I tell all my friends in California that (moving here) is the biggest mistake I ever made," Sweigart joked.

"This area up here is probably one of the best areas around," Thompson said. "You've got all type of variety for four-wheeling. You can go to Bear Lake and have a hamburger ... you can go all the way to West Yellowstone from here (on the backroads)."

In an event sponsored by the Stokes Nature Center, Bishop will be telling the story of the famous bear and his fate at Old Ephraim's grave on Aug. 20 this year, two days before the anniversary of the bear's death. A carpool will leave the Logan Ranger Station at 6 p.m., and the cost is $5.