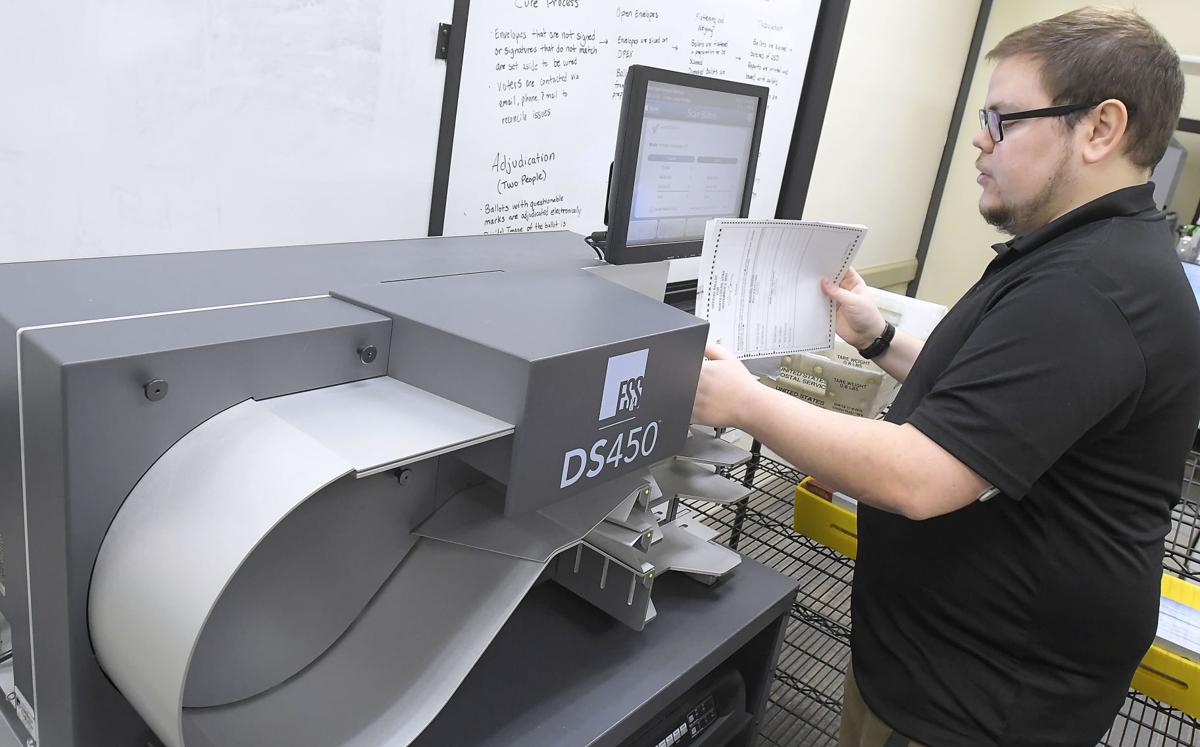 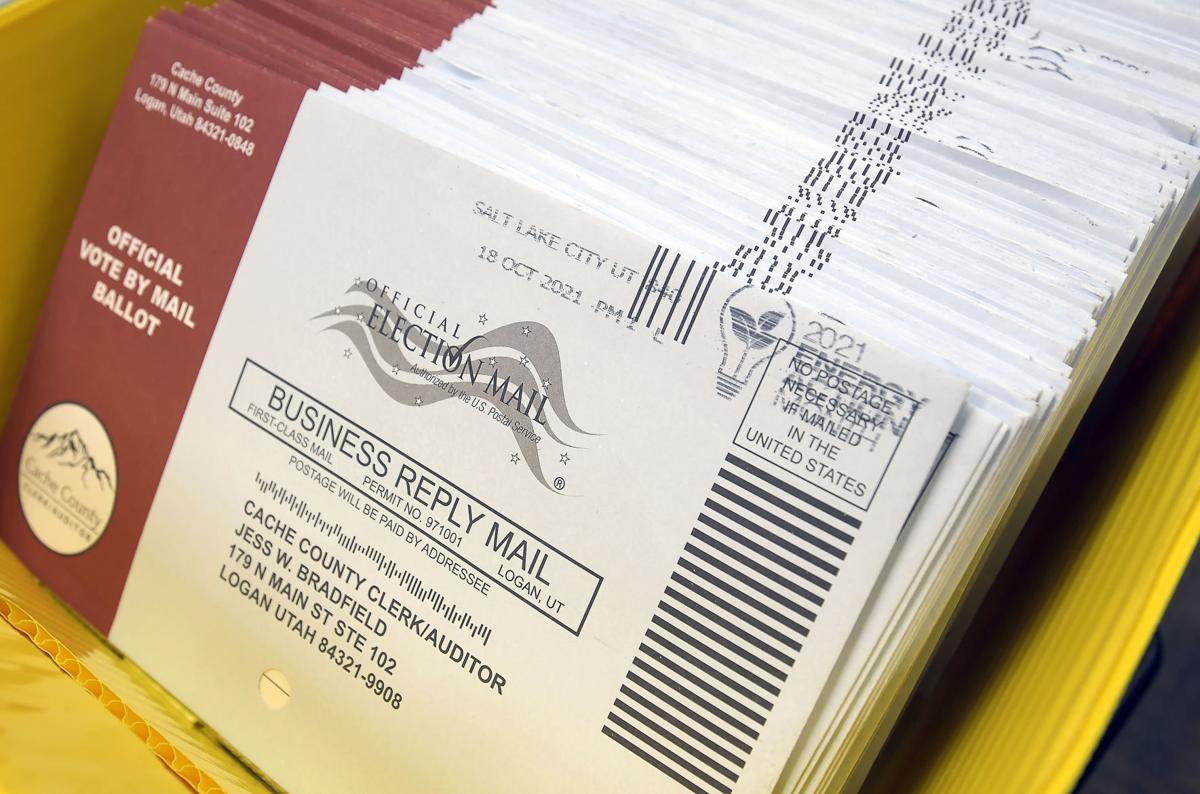 Ballots sit in a box waiting to have signatures verified on Wednesday at the Cache County Administration building in Logan.

Ballots sit in a box waiting to have signatures verified on Wednesday at the Cache County Administration building in Logan.

With the general election only a few days away, the County Clerk/Auditor’s Office wants the public to know the process is safe, despite election-result challenges around the nation by some supporters of former President Donald Trump.

“Everything we do, this entire process, is designed around voter security,” said Jess Bradfield, county clerk/auditor. “Everything we do has the voter in mind so that their ballot is protected, no one else can sign for them — if somebody tries to, we catch it — and that way their vote is protected.”

The first step in the process is confirming voter registration and that active voters will receive ballots. Absentee ID numbers are assigned — one ballot per person, which makes it nearly impossible for results to be recorded more than once.

In addition, no one is allowed near ballots by themselves. There is a constant chain of custody requiring two or more people to be together, whether the ballots are in a room, a car, a locked bag or somewhere else.

“There are only four individuals who have the code to the ballot center. All of them are within the office,” Bradfield said.

William Crist is this year’s elections coordinator. He said that after ballots are returned, whether it be through mail or in a drop-off box, signatures are first verified. Signatures are compared with documents provided from voter registration, meaning if your name changes or your signature changes, that doesn’t mean your vote won’t be counted. Updating voter registration when you get married or have a life-changing injury helps, but so does providing contact information on the envelope in case officials challenge your signature.

“There’s that line on the envelope that says email address and your phone number,” Crist said. “We really want that just so we can correct your signature if there’s any issue so we can contact you … It makes our job a lot easier and makes it easier for you to have your vote counted.”

Bradfield added that signature verification can go through three different checks if someone is unsure if two signatures match.

“Your first pass, if we’re unsure, then it has to have a second set of eyes on it,” he said. “If that’s unsure, it goes to a third pass for review. We do not take signature verification lightly. We are giving these signatures multiple passes and if there is any cause for concern, then we will call individuals into the office.”

“We always give our voters a chance to come in and reconcile those signatures,” he said. “We have a canvas period after Election Day of two weeks, and that’s to make sure all of our ballots have gotten into our office on time and all of the voters who might have had their signatures challenged have a chance to come and fix that.”

Ballots are opened blindly, facing away from the person operating the OPEX ballot extractor. This machine opens the ballots and replaces the work of up to 15 employees. Crist said that reducing ballot touch points improves security.

“It’s really important that we’re able to remove that ballot, not be able to see the name or the signature on the back of the envelope, and they all get sent into this bin so we can maintain that voter privacy,” Crist said.

Bryson Behm, a deputy clerk at the office, stated that there is “no chance of seeing what your ballot is.”

“We don’t know who you voted for,” he added.

The ballot envelopes are randomized so there is no way the ballot can be traced back to the voter. After they are opened, the ballots are flattened and run through an ES&S DS450 scanner and tabulator.

“This is like a big Scantron,” Bradfield said of the DS450. “Anyone who went through high school or college should be comfortable with this equipment. It’s very similar. Every test you took in college, it’s examining the bubbles, did you fill it out completely — that’s the same thing, basically.”

The machine will notify election workers of any issues so they can be viewed by human eyes. Its job is to capture photos of the results to make counting votes easier. For example, if someone scratches out a vote and circles another, the DS450 will request a second look.

Under Utah’s Voter Intent laws, election officials are allowed to infer the intent of a voter. The machine can be reset and will not allow the same results to be put in more than once. There are several failsafes in place.

This year, Nibley and Newton will be conducting ranked-choice elections. Although the machine can decipher the difference between standard ballots and ranked-choice ballots, Crist said that the state gave them software to help explain where the vote of residents in that town will go.

“Some people’s concern with ranked choice voting is that ‘I don’t understand where my vote is going,’” he said. “We have these great visualizers that we’ll post with our election results to show here are the results where the vote totals were moved from when a candidate was eliminated. We’ve put a lot of effort into making sure it is clear and concise for the voters.”

The Clerk’s Office pays to encrypt the data, which is then taken to a private, offline server to count the votes. None of the other machines are connected to the internet, either, for the security of the ballot. This makes it extremely difficult to hack the system.

“Not only would you have to hack our system, which doesn’t connect to the internet, but you would have to hack into the encrypted data stick to get that information,” Bradfield said. “I think that’s important. Most people don’t know that there’s that two-step process of encryption.”

For those who would prefer to vote in person, this is an option as well. Smaller versions of the ballot scanner and tabulator, called the DS200, will be at the polling locations for voters to place their ballots inside. Bradfield said the process on the “back end” is the same.

“We want all voters to know that whether you chose to vote by mail or by person, the security and system is there to protect your vote,” he said.

Behm said the machinery, in addition to saving time, has been proven to be more accurate than hand counting. The public is invited to view logic inaccuracy tests, which show that the numbers — whether hand counted by officials or by the machines — are the same.

“It’s your neighbors who are counting your vote,” Behm added. “It isn’t some person from Washington or something, it’s us. It’s not like we’re doing this off the web or traveling around the world or whatever.”

Although there have been local cases of election fraud, Bradfield said the cases were in the “ones and twos.”

“Typically it’s not fraud. It’s a lot of times that a spouse will sign for their spouse, or maybe someone left on a mission and they accidentally signed for their son or daughter’s ballot instead of their own and sent that back in,” he said. “And those we can work through.”

When election fraud cases do occur, they are taken care of immediately, Bradfield said. He added that the job of the Clerk’s Office and election staff is to make sure no one “games the system.” He said there haven’t been any listed fraud cases this year.

With this election riding on the end of a tumultuous presidential election, Bradfield hopes to settle worries and fears about the 2021 election. Former President Trump still disputes that he lost the 2020 election, and some of his supporters have challenged election security even in states like Utah and Idaho that overwhelmingly voted for Trump. Immediately before and after the election, Trump and his supporters filed more than 60 lawsuits challenging election results, according to PolitiFact, losing all but one in Pennsylvania that did not allege result-changing fraud but persuading the court that the state couldn’t legally extend a period in which voters with disputed proof of ID could provide it.

A push to audit Utah’s 2020 election is being led by former state Rep. Steve Christiansen, who resigned Thursday, saying his family had been attacked because of his election claims, and Doug Frank, an associate of MyPillow CEO Mike Lindell. Lindell has spent the months since Joe Biden won the presidential election disputing the results, alleging a conspiracy changed votes in significant numbers in all 50 states. In September, Idaho election officials responded to a letter from Lindell’s organization alleging that a computer algorithm switched votes in every county in the state. That’s not possible, according to Chief Deputy Secretary Chad Houck, if only because “at least 7 Idaho counties have no electronic steps in their vote counting process.”

Bradfield said Utah’s process in 2020 was a model for the nation.

“Transitioning to a new method of voting and/or new voting software in the same year as a presidential election is the perfect recipe for chaos and confusion, which is what happened when many states were forced to implement by-mail voting procedures during the 2020 COVID-19 pandemic,” Bradfield stated in a written response. “But that didn’t happen in Utah. While other states had very public legal battles over their election processes, Utah became a national leader in elections by demonstrating prudence.”

Cache County’s mail-in voting system has been developed over the past 10 years. Bradfield gave credit to the previous clerk, Jill Zollinger, for her hard work and his ability to build upon that system.

He added, “While other states scrambled, Utah conducted business as usual. COVID is a great example of why preparing for the future in a prudent manner pays dividends. We can’t know everything the future holds, but we can try to do a little better every day and every year. At the end of the day, that’s often what sets Utah apart.”

Bradfield and his team extended an invite to the public to come in if they have any questions, comments or concerns.

“People are concerned with every part of the process, but we want to invite the public that if they have any hesitations at all, come to our office and as the clerk/auditor, I will personally give you a tour,” he said.

Mail-in voting has allowed the team to start counting votes throughout the valley before Nov. 2. Bradfield and Crist expect results to be at 90% by 8 p.m. that night, and at 95% by midnight.

Ballots must be postmarked by Nov. 1. Early voting, conducted Oct. 26-29 during normal business hours, can be done inside the Clerk’s Office. In-person polling will take place on election day in the County building, located at 179 Main St. Logan, UT 84321.