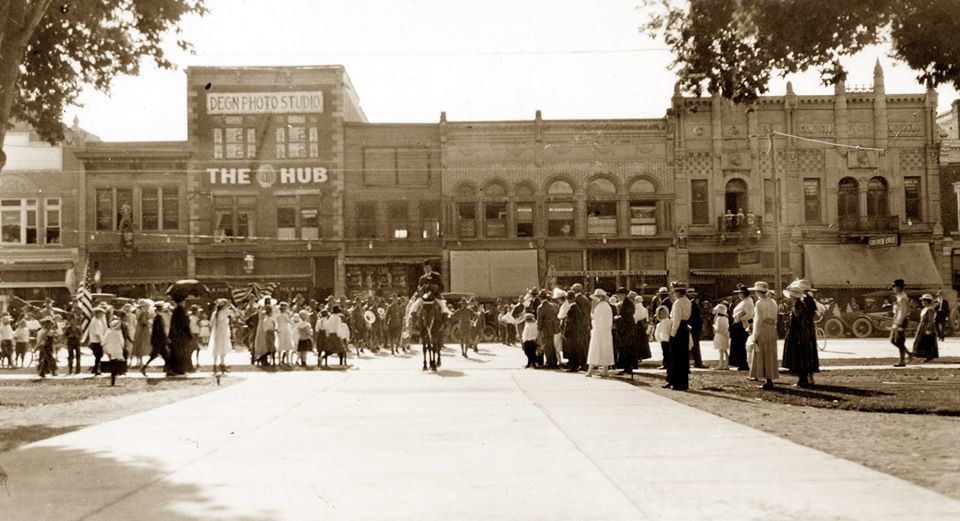 A section of Logan Main Street is seen in this historic photograph. The building on the right with spires on the facace was the Campbell & Morrell building, which sold clothing. That building and the building to the left is where the Emporium now stands. 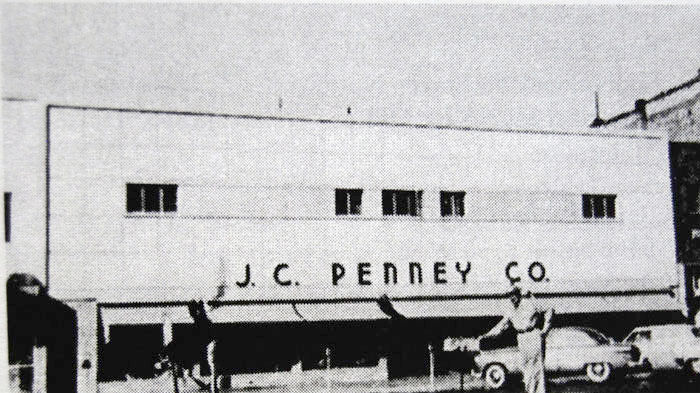 This photo from about 1945 shows the J.C. Penney building on Logan Main Street. In 1926 the Campbell & Morrell Clothing and Union Mercantile company were absorbed by J.C. Penney, which changed the front facade completely.

A section of Logan Main Street is seen in this historic photograph. The building on the right with spires on the facace was the Campbell & Morrell building, which sold clothing. That building and the building to the left is where the Emporium now stands.

This photo from about 1945 shows the J.C. Penney building on Logan Main Street. In 1926 the Campbell & Morrell Clothing and Union Mercantile company were absorbed by J.C. Penney, which changed the front facade completely.

In years past, The Emporium on Main Street has been known primarily for The Copper Mill Restaurant, eclectic little shops and a unique floor plan. Today, the Emporium is the subject of many heated conversations and sits at the center of many community members’ thoughts.

After former Logan Mayor Craig Petersen announced the city’s purchase of The Emporium in April 2016 and subsequent plans of building a library and community center in its spot, the future of the building has been a bit uncertain.

At the beginning of December, the Historical Preservation Committee voted against the city’s plan to demolish the building. While this put a wrinkle in the city’s downtown revitalization plan, the historical value of the building has also come into question.

Over the years, the building has assumed different identities and changed appearances quite a bit. What began first as the United Order Store then became the Union Mercantile Company and the Campbell & Morrell Clothing store in 1870s, according to the historic photo collection from the Logan City Library.

In 1926, the Campbell & Morrell Clothing and Union Mercantile company were absorbed by J.C. Penney, which changed the front facade completely.

Structurally there were some changes as well — enough of a change that it was considered rebuilt in 1935, according to documents from the Cache County Recorder’s Office.

J.C. Penney occupied the building until 1976 and was hugely influential to many Cache Valley residents during that time.

“I made a habit of buying lemon drops,” Tingey said. “My brother bought hot cinnamon hard candy. I remember carrying around that paper sack of lemon drops and sharing them.”

Many others remember how mesmerizing it was when the cashiers would take the money and send it upstairs to the clerks using a vacuum tube.

After J.C. Penney moved to the mall, the space was renovated once again and the facade was completely redone. The new concept was to have a shopping center on the lower floors and a restaurant on the top. Thus began the era of The Emporium.

According to a collection of Facebook comments reflecting on memories of The Emporium, the late ‘70s brought The Vault, a disco in the basement, and it was the place to be. Garden Gate, a salad and sandwich shop, opened around 1978 on the mezzanine.

The basement later housed a Boy Scout store, a mini-golf course and other odds and ends.

In 1986, The Copper Mill Restaurant came on the scene and became a go-to for date nights, family gatherings and banquets. The popularity of the restaurant led to expansion into neighboring buildings, changing the structure of the building once again.

In the early ‘80s Tom Jensen, now a Logan Municipal Council member, started his architecture business on the second floor of The Emporium, and it was his firm that assisted the expansion of the restaurant into the Plaza 45 building.

“There was a lot of traffic coming through because of the restaurant,” Jensen said. “We basically took it all down and built new structures. It was a nice building but it wasn’t historic anymore. So much of it had changed over the years.”

Jensen remembers the revolving door of businesses coming in and going out for many years and he said the restaurant acted as the anchor for the building.

However, after a 28-year tenure, The Copper Mill Restaurant packed up and moved to North Logan in 2014. At that time, the shopping center boasted close to 20 tenants but patrons began to decline.

“It wasn’t so much a neat place to go and shop anymore,” Jensen said.

In the months following The Copper Mill’s departure, the foot traffic in the shopping center began to decline. After the city purchased The Emporium for $2 million in 2016, businesses began to relocate.

A few businesses stuck around for a while, including Shear Shack Hair & Nails, Gold Coin & Diamond Exchange, Creative Threads, Logan Dental Lab and Chiryoku Karate. However, the city gave businesses a deadline to leave by August 2017. Since then, the building has been empty, the vacant storefronts and dim lighting giving off the appearance of a ghost town.

Local law enforcement K-9 units have used the building as a training ground but Jensen said the building stands in need of major repairs before it can be used for anything beyond K-9 drills.

Jensen said there were etchings throughout the building depicting local scenes and other eclectic pieces of history that he hopes have been saved.

The city is still working on the idea to replace the building with a plaza and apartment complex in an effort to revamp downtown. Others argue that the building should remain, and some are willing to fund a remodel.

For now, the colorful skylight that at one time shone down onto an atrium remains clouded by layers of dust and cobwebs.