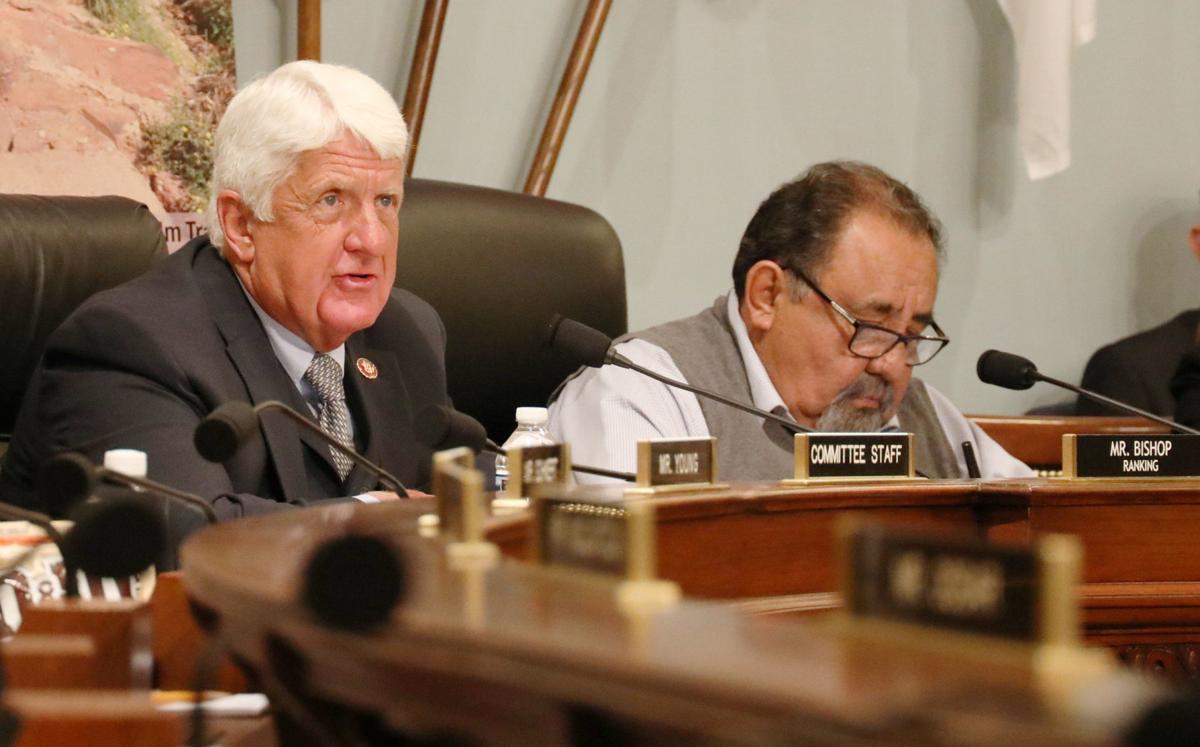 Congressman Rob Bishop speaks about the Restore Our Parks and Public Lands Act at a committee meeting in June 2019. 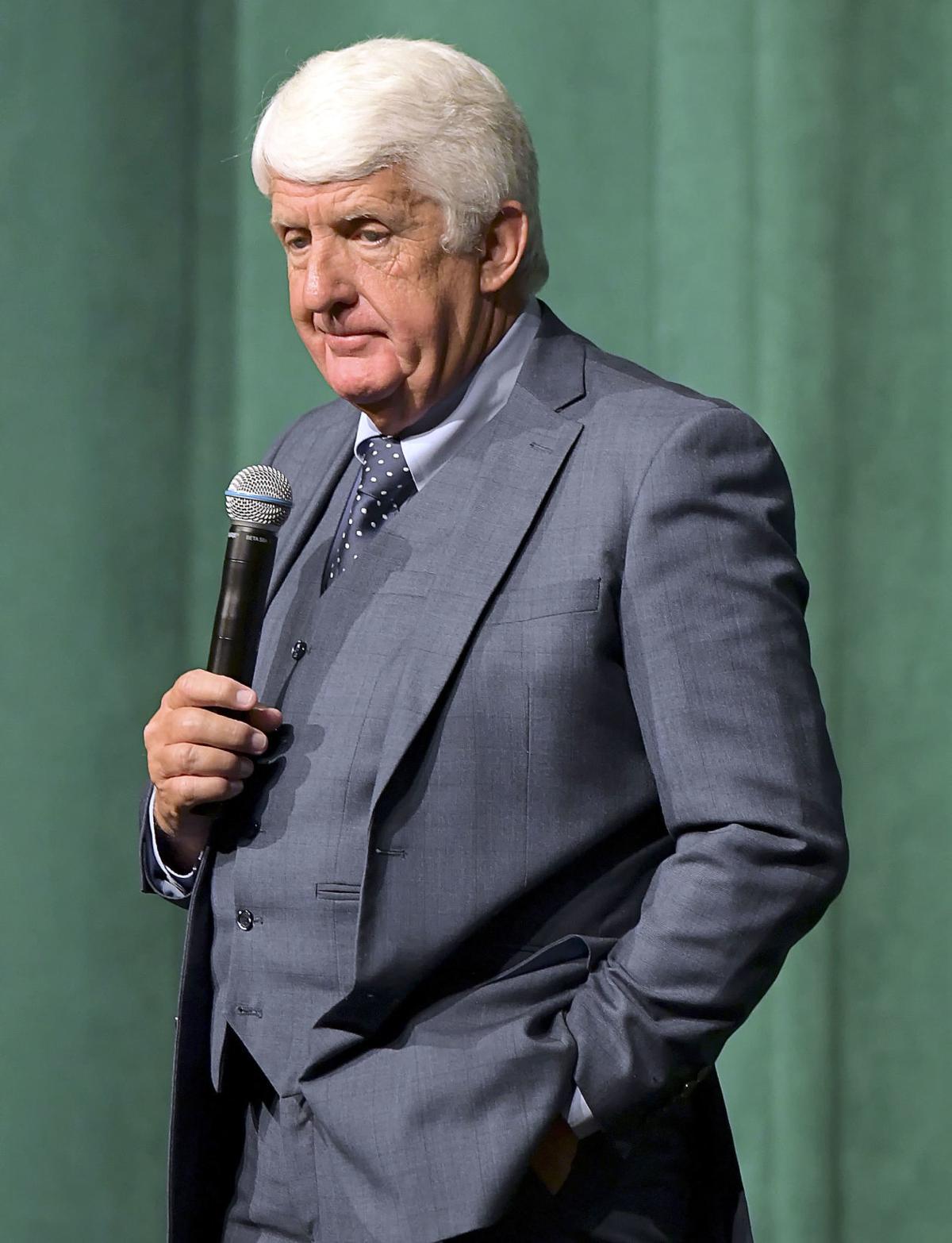 Rep. Rob Bishop listens to a question during a town hall meeting in North Logan in 2018.

Congressman Rob Bishop speaks about the Restore Our Parks and Public Lands Act at a committee meeting in June 2019.

Rep. Rob Bishop listens to a question during a town hall meeting in North Logan in 2018.

Donning his standard three-piece suit, Rob Bishop exited the Natural Resource Committee room in the Longworth House Office Building in Washington D.C., and members of the congressman’s staff filed out behind him. They picked up the pace as they passed through corridors into the underground tunnels of the U.S. Capitol building, finally reaching the House floor for votes.

It’s the same drink he’s been downing for the 17 years he’s been in Congress. Some days it is the only thing that helps him slog through the thick swamp of bureaucracy.

The political landscape has changed a lot since Rob Bishop became a congressman nearly two decades ago. After confirming in July that he would not run for another term representing the First Congressional District, he has kept Utahns guessing about his next move. On Monday he put some speculation to bed when he announced he would not be seeking a gubernatorial bid.

Now, as he prepares to retire and decides what comes next, a man who came to D.C. wanting to create change is coming to grips with the fact that Congress has also changed him.

As the son of the former mayor of Kaysville and grandson of a city council member, Bishop was born and raised in politics. While aspirations of becoming a teacher collided with his fifth-grade dreams, he could never shake the political lifestyle exhibited by his father and grandfather.

And although he claims political science is a useless degree, he and each of his five children studied that field in college.

Through high school, college and even as he balanced a career as an educator, Bishop remained positive and motivated about his role in local and state politics. While at the Utah House of Representatives he carried on teaching his high school students, excluding the 45 calendar days the legislature was in session. This balancing act was exciting and would prove to be good practice for Bishop’s future as he graduated to a federal platform.

People take themselves very seriously in the state legislature, and Bishop hatched plan after plan for how to break down the self-righteous stigmas swirling around the Utah State Capitol while he was speaker of the House. It was like a game to him. Sweater days were initiated, “and they weren’t just on Fridays as the rumor suggests,” he said.

Bishop encouraged and sometimes insisted that people not wear suits. This didn’t stop with sweaters, and western garb and ugly shirts were encouraged as well. Sixteen years in the state legislature brought many fond memories for Bishop.

The beginning of his climb to Congress was a patchwork of excitement and late, late nights.

“We were just as excited as he was and we adjusted to the new routine without really thinking about it,” said Jashon Bishop, Rob Bishop’s youngest son.

The intensity of campaigning every two years, however, was exhausting and the magic of it wore off.

After being elected to represent Utah’s First Congressional District, his commute to work became a cross-country trek.

Rob Bishop makes a big and busy career more personal than seems possible in D.C., said Peter Jenks, Bishop’s district office director. Jenks said the travel alone can wear anyone down, but it’s all part of a job with many challenging aspects.

In D.C. the congressman said he sees more and more egotistical facades and he finds it increasingly difficult to reason with people when everyone speaks in 280 characters or less. Being busy is one concept and pretending to be busy is a completely different one, he said, relating his anger of having processes and protocol prolonged recently in order to make it appear as though more work is being done.

Even though he was the third-best-dressed member of Congress in a close race against Nancy Pelosi (D-Calif.), who came in second, he tries his best to stay out of the fanfare in Washington.

“No, no, no, call me Rob,” Bishop said, correcting one of the new 2019 summer interns, Augusta Scott, when she addressed him as congressman.

Scott, a political science student at Utah State University, had dreamed of working in Bishop’s D.C. office since she was 14 years old. Back then, a family friend was an intern for Bishop, and when she imagined her friend living out a real-life “West Wing” episode, Scott set a goal to one day work in Bishop’s office.

Scott didn’t work in the West Wing of the White House and President Bartlet is a fictional character, but she did work with a man who she said has the same wit and brains as the popular TV character. And while Bishop and Bartlet’s loyalties lie with opposing political parties, the non-apologetic sarcastic one-liners and hard-fisted devotion to every teaching moment are just a glimpse of their similarities.

Bishop made efforts in the beginning to treat D.C. as he did at the state Legislature, to help people loosen up. Currently, a round of Jeopardy on a Friday afternoon in the office stands as a tribute to that concept.

“You could tell that being in the minority was a drag for him, and we did our best in the office to make every day as effective and enjoyable as possible,” Scott said.

Being in the minority this Congress is much harder for Bishop than it was when he was first elected back in 2002, when the Democratic Party also held the House.

Committee meetings are already long but when the meeting agenda gets tossed around, jumbled and none of the Republican priorities are addressed, Bishop said it can feel like nothing is getting done. He asserts a pointed comment or sparking allegory when he sees fit, but it can be hard to sound like a broken record.

“It is especially harder because I am older, more bitter and tired,” he said.

He said there are some people who like to fight the good fight even though they know a win is not in the cards, but Bishop likes to get stuff done.

However, a big criticism of Bishop that Jenks and others have heard from constituents is that he stays silent on some important issues. This is a trend in the Republican Party, said Democrat Lee Castillo, Bishop’s opponent in 2018.

The Layton native said that although he was “friendly enough” when they first met, Bishop and other Utah representatives should have stepped down a long time ago. Castillo said they aren’t getting stuff done.

Jenks and Travis Campbell, Bishop’s constituent liaison, believe the disconnect lies in Bishop’s aversion to social media. Social media controls most of the conversations in D.C. and most constituents rely on social platforms such as Twitter and Facebook as a source of information.

The congressman believes, however, people should start to learn how to talk to each other. He cites the Constitution as proof that this country was founded on debate and discussion. Currently, committee meetings rarely have the same beat as the cabinet battles from “Hamilton,” but the sentiment is often similar.

“He will sometimes just call constituents up,” Campbell said. “He actually just did that the other day.” If the person calling in has an issue that is hard to explain or understand, he calls them and explains the hows and whys. “It always leaves them a bit starstruck and appreciative.”

During the summer, county commissioners, Hill Air Force Base officials and even some of the contenders for his spot in Congress approached Bishop in hopes of swaying his decision to retire.

Others had their fingers crossed in hopes that he would follow through with his exit plan. When Castillo attempted a run for Bishop’s spot last year, he said it was a calling. Although he said he is not certain if he will feel the same call this next term, the anger he feels about what Bishop has done to the district might just sway him. Just as Bishop has changed over the past 17 years, Castillo said the district has as well.

“I gave all arguments legitimate concern and thought because I’m not really ready to quit, but at the end of the day, I had given my word,” Bishop said, speaking of his retirement announcement in 2018 that it seems many people forgot about.

His eternal dislike for Uncle Sam’s grip on individual states and a hope that he can bring perspective to a new life direction is bringing the congressman home, back to the district where he worked, taught and raised his family. And then he will not just be home for the weekend.

Bishop enjoyed a jet-lagged Sunday with his family before hopping on a plane back to D.C. While this trek has become as normal and as bothersome as taking the trash bins to the curb every week, the cross-country commute has its days numbered. Next January, Bishop will head home and only he knows what comes next.

Calling on advice given to him by former Utah State legislator Lorin Pace, Bishop said, “You should quit before it breaks your heart.”