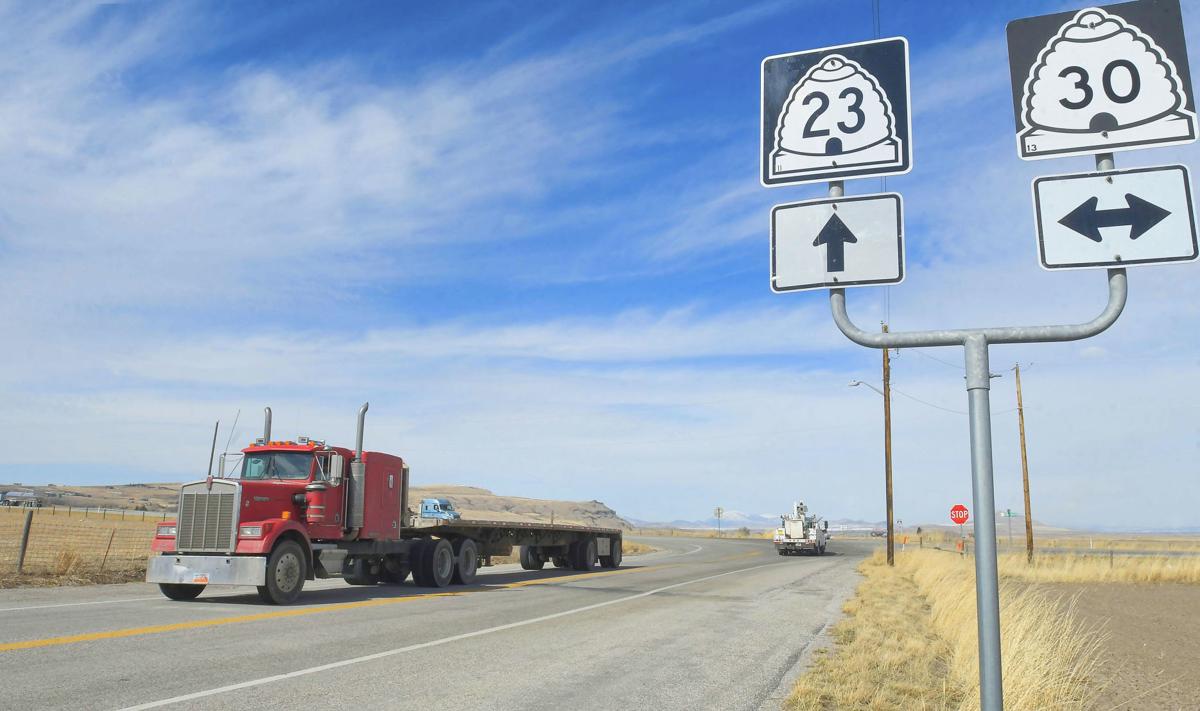 A truck drives near the intersection of State Routes 23 and 30 in Petersboro on Monday. 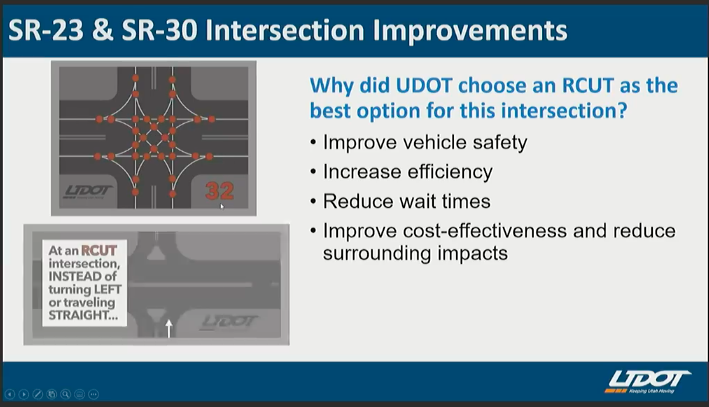 A screenshot from UDOT's Feb. 2 presentation to Logan Municipal Council shows proposed changes to the intersection of State Route 30 and State Route 23.

A truck drives near the intersection of State Routes 23 and 30 in Petersboro on Monday.

A screenshot from UDOT's Feb. 2 presentation to Logan Municipal Council shows proposed changes to the intersection of State Route 30 and State Route 23.

Improvements to State Route 30 originally meant to start construction this spring have been delayed once more, but the Utah Department of Transportation has used the time to potentially address issues with State Route 23, as well.

“It’s moving forward, and we’ve basically got the design done, but we have a lot of right-of-way and other hurdles, regulatory hurdles, we have to jump over,” said Dave Adamson, the project manager with UDOT, at the Feb. 2 Logan Municipal Council meeting.

During the delay in funding needed to move the $75 million project forward, options to adjust to the intersection of State Roads 30 and 23 were looked at, such as: doing nothing, a traffic light, a roundabout, a “grade-separated intersection” (a bridge overpass) and a divided highway.

The cost of either a divided or grade-separated intersection would more than double the price and have detrimental impact on the surrounding wetlands. The environmental report also determined a traffic signal or roundabout would cause more problems because it would either slow or stop traffic flow on State Route 30.

“It’s a block or so out of direction travel, but it significantly increases the safety,” Adamson said, “and our traffic and safety people are really pushing it just because as traffic increases, and as we’re widening up SR 30, it’s going to be harder and harder for for people moving on and off of SR 23 to make that movement, where you have to get a clearance or get a gap in both directions to travel.”

At a Cache County Council meeting on Jan. 26, several council members raised concerns over whether the proposed change was necessary. Adamson, however, said there have been a couple of fatalities at the intersection in recent years, most recently on Sept. 2, 2018, when the driver of a Chevy Blazer failed to stop at the current stop sign.

“Safety over convenience has to be the priority,” Council Member Dave Erickson said at the meeting, though he noted a preference for a light above all else. “Especially out there on certain severe mornings of fog and things like that, you’ve got to have something to mitigate that time that you’re out crossing that entire road. So I hate to say it, but safety over convenience is really critical right there.”

For example, as the intersection currently stands, there are 32 “points of conflict” where a crash could potentially occur, but Adamson said an RCUT would drop that number to eight.

“It’s kind of a prime real estate intersection where everybody wants to use it at once,” Adamson told the Logan Municipal Council. “You’ve got left-turners, you’ve got people going through, you’ve got right-turners — you’ve got all those different movements trying to use that same little chunk of ground, and it causes a lot of conflict points, and it also limits how much traffic you can push through that that prime real estate.”

Logan Council Member Jeannie Simmonds and Cache County Council Member Gordon Zilles were also concerned the intersection would allow for the semi trucks and farm equipment that are frequently used in the rural area of the county.

“It’s all about design in the radiuses that we’re building it with,” according to Adamson, “and the spacing (planned) will allow semis to traverse it and also farm equipment.”

Adamson added that several similar intersections have been successfully implemented in Layton — where he’s lived for 27 years.

“By the Layton Hills Mall and the Walmart there, especially during busy times — especially during Christmas — it would take literally 10 minutes to get a quarter mile or half mile through that intersection,” he said. “We’ve put four of these RCUT type, in all sorts of directions intersections in, in addition to improving the interchange, and it flows extremely well now. And it’s a lot safer.”

Though no official vote was taken, both councils were in favor of the proposal as a way to mitigate traffic hazards, and according to Tiffany Carlson, a spokesperson with Avenue Consultants who worked on the project, it’s been the general consensus from most of the officials that “if it seems like it’s gonna work a lot better, and it’s a lot safer, we’re gonna have to figure out how to drive it.”

The project has been pushed back, due to funding and right-of-way acquisition issues, and is set to begin construction in spring or summer of 2022.