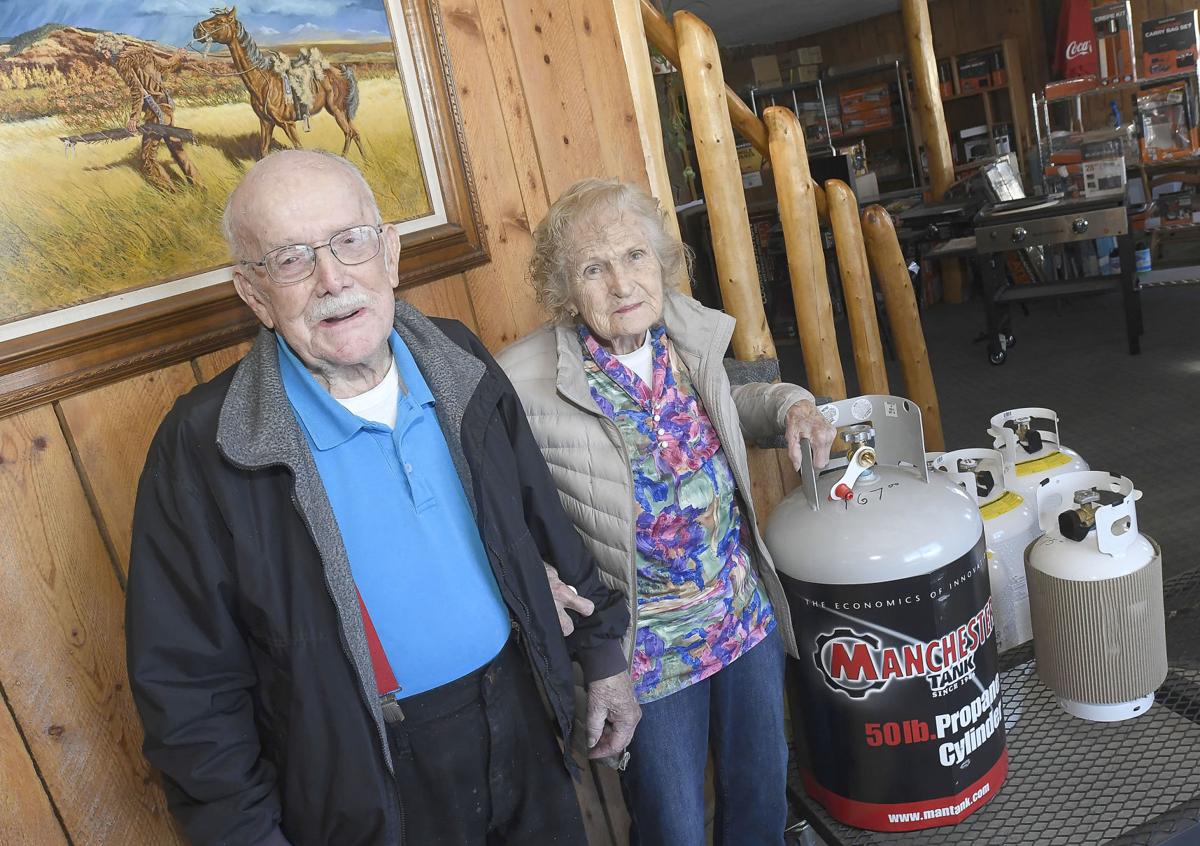 LaVere and Lunella Barker pose for a portrait inside Barker’s Propane on Wednesday. 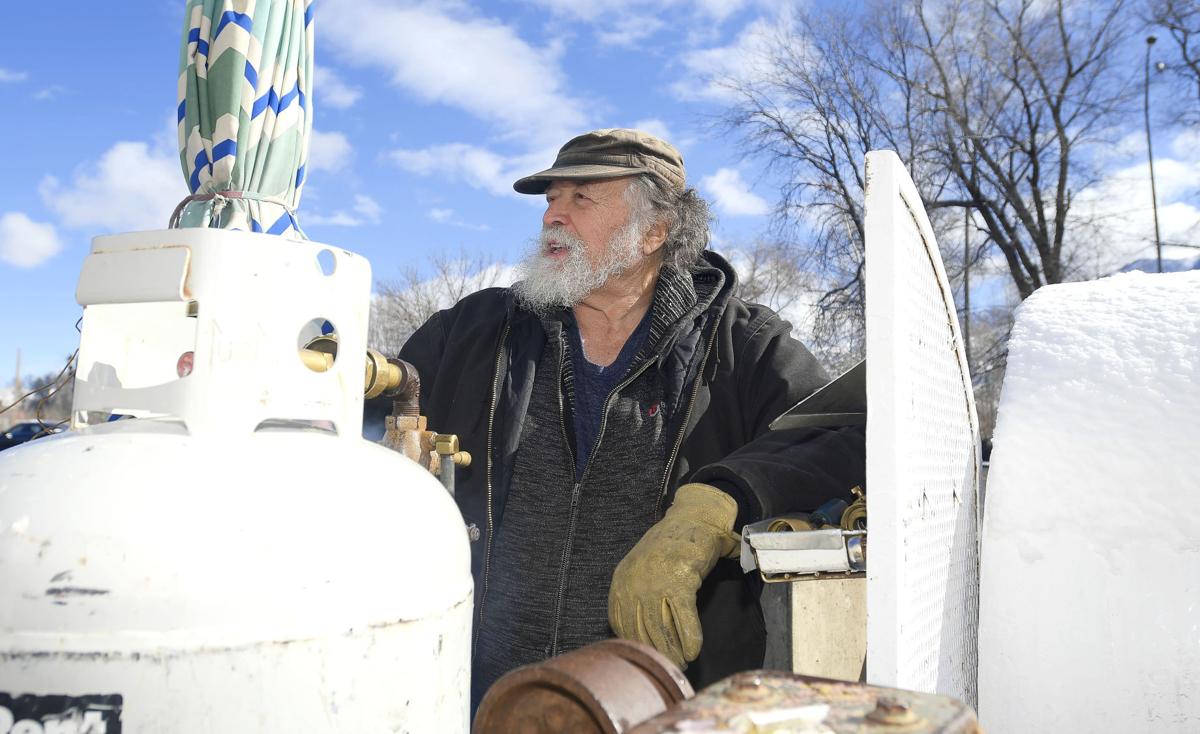 Vern Barker fills up a customer's propane tank at Barker's Propane on Wednesday.

LaVere and Lunella Barker pose for a portrait inside Barker’s Propane on Wednesday.

Vern Barker fills up a customer's propane tank at Barker's Propane on Wednesday.

The “Y” intersection on South Main Street in Logan hasn’t always resembled the second-to-last letter in the alphabet. Long ago, it had some zigs and zags that you don’t see today, and the triangle-shaped property wedged between the divide was a lot bigger.

The one constant has been the proprietor of the business on that spot — LaVere Barker, who opened a service station there in 1950 and has watched his business go through several incarnations as millions upon millions of Cache Valley residents have passed by in their cars.

“We had a highway surveyor in a few years ago who said 80,000 cars go by here every day,” said Barker, who at age 95 still works a couple of days a week at what is now known as Barker’s Propane.

And it’s real work. He fills the propane tanks at the store.

Asked why both he and his wife, Lunnela, still put in time at the shop regularly, Barker responded, “Probably to keep alive. That’s about the only time we get out of the house. I’m still able to do it. My legs are gone, but I have a little cart out here I wheel down there to get the propane and bring it back.”

The business has always been a family affair, providing jobs at various times for all five of the Barkers’ children and many other extended family members. Today, sons Vern and Garth manage the place.

“When Vern was 10 or 12 years old, I paid him 10 cents to clean the headlights on each car that came in. He put himself through college from working here,” Barker said. “And (daughter) Dreena could tune up a car. She’d fix tires and everything, and she put herself through college too.”

When Barker started operating the two-pump service station in 1950, it sold gasoline under the old Wasatch brand with an Indian chief on its signs, but he soon struck a new franchise deal with Phillips 66.

Around 1980, he switched to Sinclair, and the station remained under that banner until its gas pumps were taken out in 1999 and the business became a convenience store that also sold propane.

After that, the store morphed into a consignment shop, an art gallery and rented snowmobiles for a time — all while still selling propane. Today it just sells propane and propane accessories.

In the early days, the station did a brisk business delivering fuel oil, stove oil and diesel oil around Cache Valley for heating purposes, a household demand that slowly gave way to natural gas and propane.

Another early-day gas station function that gave way during Barker’s time at the “Y” was full service at the pumps. That’s back when cars entering the property would run over a hose that rang a bell inside the station, summoning an attendant who would greet motorists with a smile, wash their windows, pump their gas and offer to check their oil and wiper blades.

Vern Barker, who joined his parents for an interview with The Herald Journal on Wednesday, attributes the demise of pump attendants to the after effects of the 1973 Arab oil embargo, noting that “gas wasn’t making any money for stations, so we all went to self service.”

During the heyday of classic service stations, virtually all outlets included auto repair bays, and many operators were also trained mechanics. All of the Barkers did repair work, and at one point son Max became known as Cache Valley’s go-to mechanic for foreign cars.

As a young man, Vern’s specialty was “souping up” cars, a very popular practice among teens in the ’50s and ’60s.

“I used to build racing engines, did a little drag racing, had the cops on my neck all the time. Dad, he’d hear about it and let me know,” Vern recalled, glancing over at his father with a smile.

The old auto repair bays at Barker’s are still attached to the back of the building and look like they could be revived with just a few renovations. The Barkers have received offers from mechanics to rent the space but have never reached an agreement with anyone. In the meantime, Vern uses the bays for blacksmithing, something he teaches at Bridgerland Technical College.

Rental offers aren’t the only propositions the Barkers have entertained over the years. With new developments sprouting up along South Main Street, the high-visibility property has attracted many suitors, but proposed deals have always hit a few sticking points during negotiations.

“I’m so tired of all the people wanting to come in here and buy the property, I’m to the point of when we want to get rid of this, I’m going to put an ad in the paper that says ‘highest bid takes all,’” Vern said. “That’ll cut down the arguments and everything like that. But as long as I’m up and moving around and need things to do, I’ll just keep it going.”

The property at the “Y” used to be quite a bit larger than it is today, but road realignments through the years have resulted a gradual shrinking. The triangle-shaped lot still has entrances on two sides and room on the north point for a food truck, which is perhaps what the spot is best known for today. Four different trucks trade off using the space during the warm months of the year.

It’s also a popular shortcut for drivers wanting to avoid one of the two traffic lights there, but as LaVere points out, most people pulling this stunt end up waiting longer to get back on the roadway than they would have waiting for their light to change.

Listening and watching cars go by at one of Cache Valley’s busiest intersections has been a way of life for the Barkers, and so have automobile crashes.

“We used to have a crash or two a week out here,” Vern said. “We got to a point where we’d hear a crash and just reach for the phone. Of course in those days we didn’t have any cell phones or anything like that. When there were any crashes in this area, people would come in and use our phone to call it in. So we’ve had quite a few adventures.”

The gas station at the “Y” was one of three operated by LaVere over the years. Before moving there, he ran a small station near the USU campus where the Utah Public Radio building now stands. For a short time, he also operated a station called Mid-City 66 on the property now occupied by the USU Credit Union.

This year LaVere and Lunnela celebrate their 75th wedding anniversary. The couple met in their teens during the 1940s.

“I was in Logan High and she moved down from St. Charles,” LaVere recalled. “My one friend says ‘There’s a new girl in town and I want to meet her,’ and I said I’d introduce him to her even though I didn’t know her. Well, I introduced my friend to her, and he dated her for a while, but then I decided to date her.’’