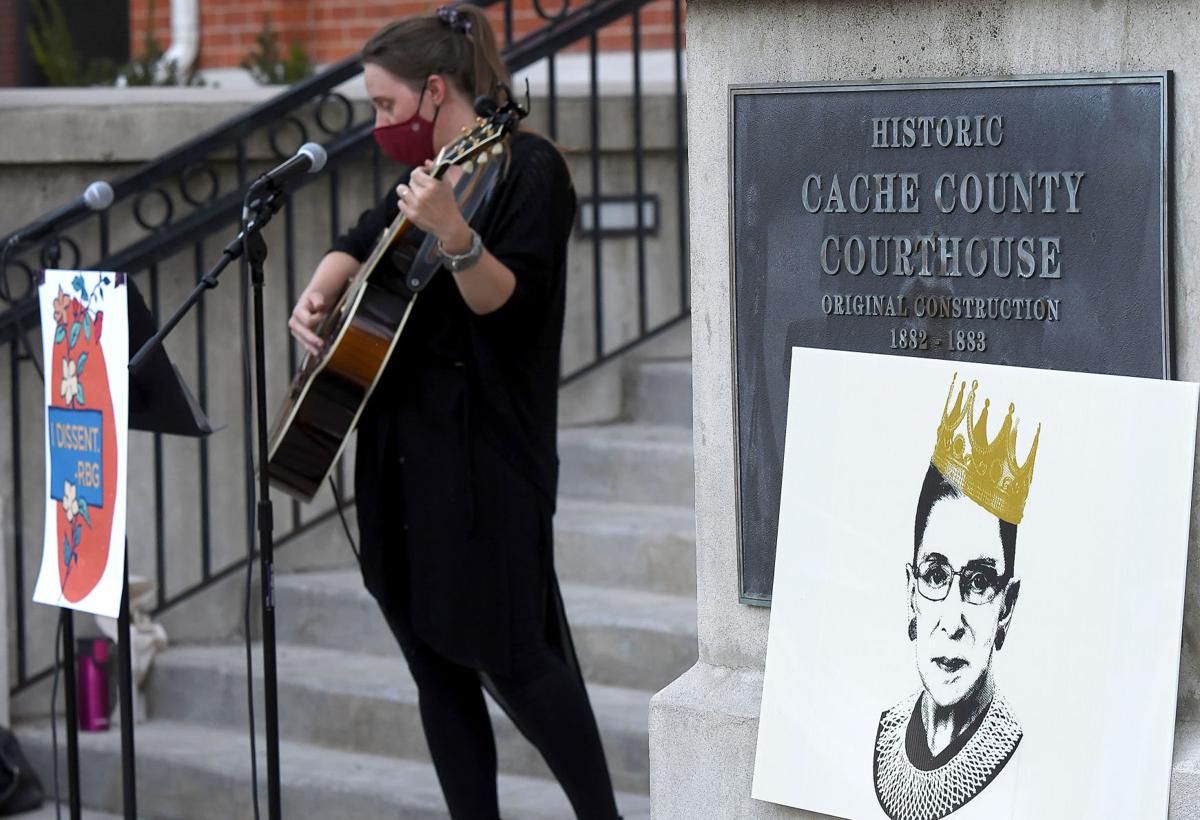 Lyndi Perry performs during a memorial in honor of Ruth Bader Ginsburg on Tuesday in Logan. 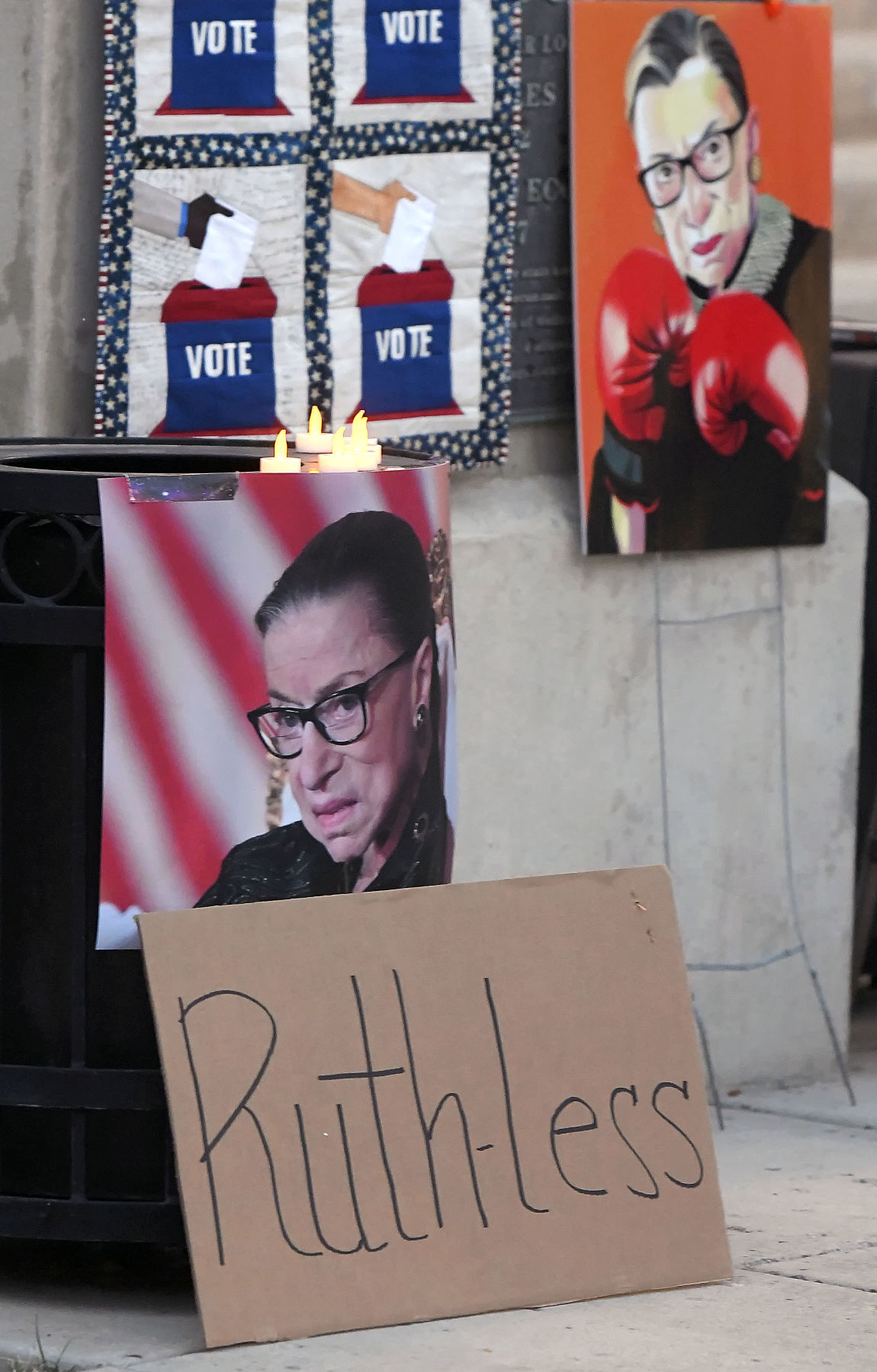 Items sit near the steps of the Historical Cache County Courthouse during a memorial in honor of Ruth Bader Ginsburg on Tuesday.

Lyndi Perry performs during a memorial in honor of Ruth Bader Ginsburg on Tuesday in Logan.

Items sit near the steps of the Historical Cache County Courthouse during a memorial in honor of Ruth Bader Ginsburg on Tuesday.

A crowd of 24 locals gathered outside the steps of the Historic Cache County Courthouse at sunset on Tuesday to honor the late Ruth Bader Ginsburg and her accomplishments.

“She was a powerhouse and an icon,” organizer Susan Jelus said of the late Supreme Court justice.

The memorial consisted of songs, poetry, a moment of silence and moments of celebration for the rights the late Justice worked to secure for all citizens, regardless of sex.

Ginsburg fought sexism throughout her career. Because of her work in the courtroom — even before she was appointed to the Supreme Court — any single adult can have a credit card in their own name, take out a mortgage or get and keep a job, even if they’re pregnant or have kids. Men who lose a spouse qualify for the same Social Security benefit as a woman who lost her husband would. Single parents can maintain custody of their kids.

After battling separate bouts of cancer since 1999, the 87-year-old Justice died on Friday.

“Normally, we say rest in peace,” Jelus said. “And the Jewish say, ‘May her memory be a blessing.’ But I’ve seen people say ‘rest in power,’ especially for her, because without her power, there would be no peace for women in this country.”

This was particularly poignant for Hannah Taylor.

Taylor’s aunt, Jennifer Walker, added that the memorial is a chance for the community to come together.

“Sometimes we feel like we don’t have a voice, and I always appreciate opportunities to come together when we can express with our voices and our bodies how much something means to us,” Walker said. “And so I think it’s important to show up, and be heard and to acknowledge, especially, this woman, Ruth Bader Ginsburg. She will have an impact on all our lives, even far after we are gone.”

Paying homage to RBG is a nonpartisan issue, according to Mary Urban, as her work benefited all citizens — regardless of sex or political beliefs. Walker said Ginsburg’s friendship with former-Justice Antonin Scalia is representative of that.

“I’m so impressed with the way she formed her friendship with someone who had such different political views than her,” she said. “I hope that I can be more like her. I hope that I can take that example and show kindness and love and be willing to listen when I don’t always understand or agree with somebody.”

Urban said though the date of the memorial was chosen to pay respect before Ginsburg would lie in repose at the U.S. Supreme Court — the first woman to be granted that honor — the date was serendipitous.

“It just happens to also be National Voter Registration Day,” Urban added, “and I think that Justice Ginsburg would appreciate that, given how devoted she was to voting rights throughout her career, and especially as a Supreme Court Justice.”

Since her death, CNBC reported voter registration throughout the country has surged, though Kim Gardner of the Cache County Clerk’s Office said registrations over the last few days have been typical for this period in the election cycle.

Kerri Jones said she has been inspired by Ginsburg’s persistence.

“She just kept pushing and going, and she just never gave up,” she said. “For me, I tend to give up, and that’s something that hit me strong with her, is just to not give up.”

Though a profound loss, Jones added Ginsburg’s death is bringing more awareness to her accomplishments in championing equality both before and after her appointment to the Supreme Court in 1993.

President Donald Trump announced plans to nominate a woman to replace Ginsburg on Saturday, after the former justice is laid to rest at {span}Arlington National Cemetery next to her husband, Martin, who died in 2010{/span}. Though Senate majority leader Mitch McConnell blocked President Barack Obama’s nominee following Scalia’s death in early 2016 as it was an election year, he has vowed to push the vote through on whoever Trump nominates.