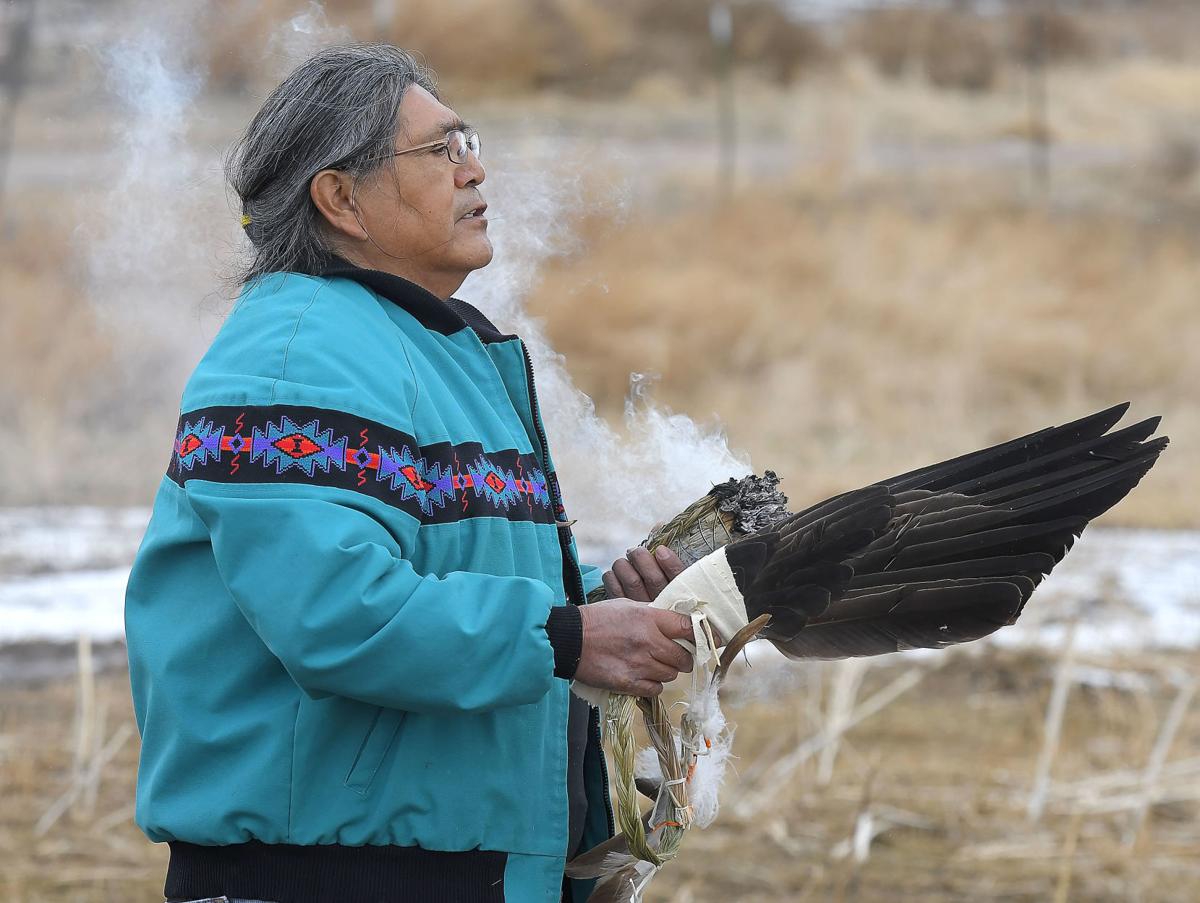 Rios Pacheco gives a blessing during a Bear River Massacre memorial on Friday near Preston. 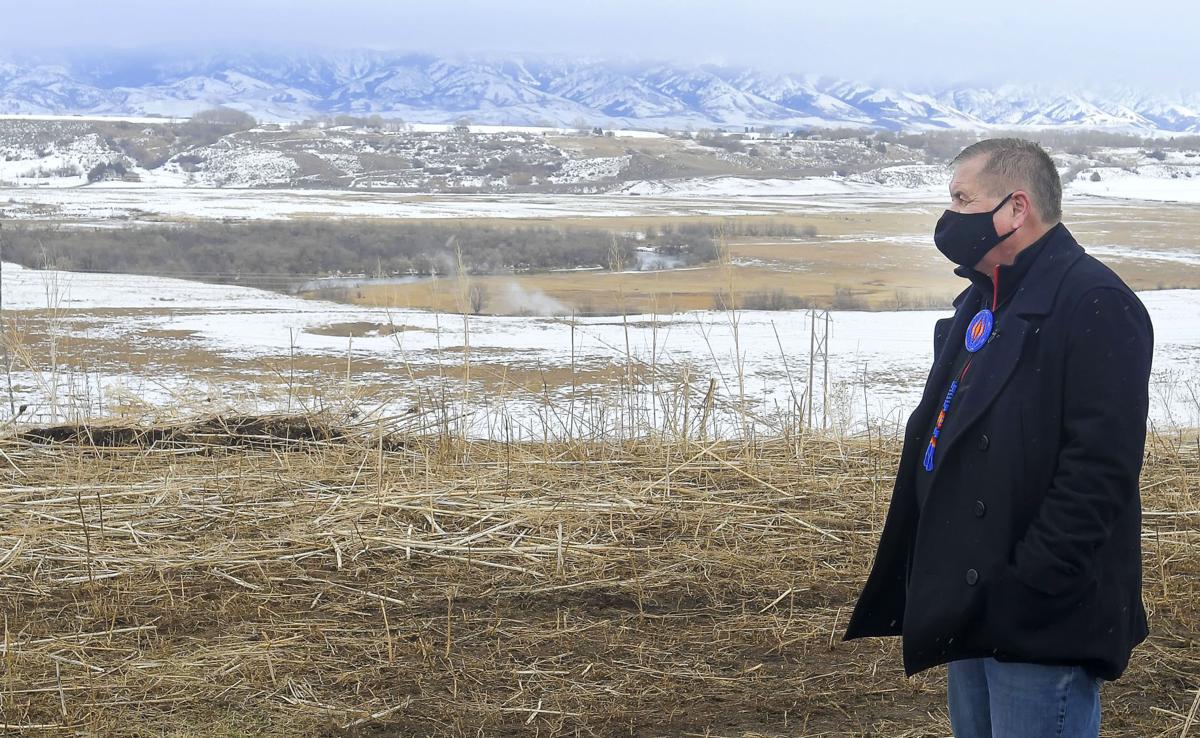 Darren Parry looks over the site of the Bear River Massacre during a ceremony to commemorate the 158th anniversary of the event.

Rios Pacheco gives a blessing during a Bear River Massacre memorial on Friday near Preston.

Darren Parry looks over the site of the Bear River Massacre during a ceremony to commemorate the 158th anniversary of the event.

For members of the Northwestern Band of Shoshone Nation, Jan. 29 is an emotional day — a day of remembrance for the hundreds of ancestors who lost their lives 158 years ago near Preston, Idaho.

On Friday, they held a memorial for those victims of the Bear River Massacre overlooking the very land they were murdered on.

“Welcome to our land,” said Darren Parry, one of the band’s seven council members. “This is the first time in 158 years that we’ve been able to say that.”

A path to healing, education

Smoke from cedar fires — traditionally used in Shoshone burial and other sacred ceremonies — wafted over those in attendance to cleanse them and the souls of those killed on the sacred land 158 years prior.

It resembled the steam from the natural hot springs along the Bear River when women and children tried to take refuge during the attack led by Col. Conner and the Army volunteers.

For the first time in history, the memorial was held on the sacred land, purchased piece by piece by the Shoshone over the last several years.

“There are feelings of unrest in that valley down there, like the people who died down there are saying, ‘This wasn’t fair,’” said Brian Parry, one of the elders of the Northwestern Band. “Those people need rest and the formality of being recognized. In getting this land back, we can finally put those souls to rest.”

Now, the Northwestern Band is raising funds to build the Boa Ogoi Cultural Interpretive Center, named for the Shoshone phrase “Big River,” as their ancestors had called the Bear River Valley, to serve as habitat restoration for the area, reintroducing native plants, as well as educating the public on the massacre and the Shoshone people.

Congressman Blake Moore, who ran against Darren Parry for the District 1 congressional seat in 2020, was invited to the event after he promised to read Parry’s book: “The Bear River Massacre: A Shoshone History” during a debate leading up to the election.

“The content of his book, it was the first time I’d heard a lot of it,” Moore said. “I have three little boys. When I read about the mothers taking their babies and hiding in the river on that January 29th, and (today) is one of the warmer January 29ths we’ve had, thinking about taking my boys and having to hide in a river — it never really came alive to me until I was here today on these special grounds.”

He added the day is “a solemn remembrance that reminds us our failure to see our brothers and sisters as family is what leads to division, violence and social collapse.”

Better than the past

The massacre is regarded as one of — if not the — largest and bloodiest killings of Native Americans in the West, though the true story has not always been taught or memorialized outside of the descendants who survived the tragedy.

Darren Parry’s great-great-grandfather, Chief Sagwitch, was one survivor. He was shot but ultimately escaped the Jan. 29, 1863 massacre. It’s estimated between 250-400 men, women and children of the Shoshone and Bannock people were killed, though it was likely even higher.

The Daughters of the Utah Pioneers and other groups erected a memorial just off U.S. Highway 91 in 1932 that labeled the event “The Battle of Bear River” and also undercounted the deaths.

“Col. P.E. Connor, leading 300 California volunteers from Camp Douglas, Utah, against Bannock and Shoshone Indians guilty of hostile attacks on emigrants and settlers,” the old plaque stated. Connor “engaged about 500 Indians of whom 250 to 300 were killed or incapacitated, including about 90 combatant women and children.”

Following this year’s memorial, the DUP unveiled an updated plaque to correct the misconceptions from that fateful day.

“The first sentence says it all, you know,” Darren Parry said. “‘Here on the site more than 100 years ago, more than 400 men, women and children were massacred.’ After that alone, it could say whatever they wanted, and we’re good. So I’m really happy with the changes that were submitted.”

As Michael Gross, the vice chair of the council, sang at the event, “We must all forgive, but we must not forget. We’re still standing here.”

The event on Friday was a more intimate gathering than in previous years due to virus-mitigation efforts. Many Native American populations have been among the hardest-hit in the U.S.

For some in attendance, it was the first time they’d seen each other in months and were able to talk about friends and family members who’ve been killed or are still fighting the virus.

Several members watched the proceedings from their cars, away from the small crowd, as an additional layer of protection. Among those were Alicia Martinez’s parents, who felt that despite the risk it was important to come out “because it’s still a continuation of our culture, of the history.”

“You can’t help but take this historical view and put it in the context of today, with how much we still have to overcome, how many more obstacles there are still,” said Martinez, whose family also had ancestors who survived the carnage. “I think that it’s good to come back and to remember those that survived and those that were lost, and remember about what happened and how that’s changed us.”

Next year, the Northwestern Band hopes to welcome the typical number of observers at the site but in a planned outdoor amphitheater outside of a cultural center.

Video from Friday’s memorial will be available online in the next week, courtesy of Brigham Young University’s ARTS partnership. Darren will share more information on his Facebook page when a link becomes available.

More information about the cultural center project is available at https://boaogoi.org.