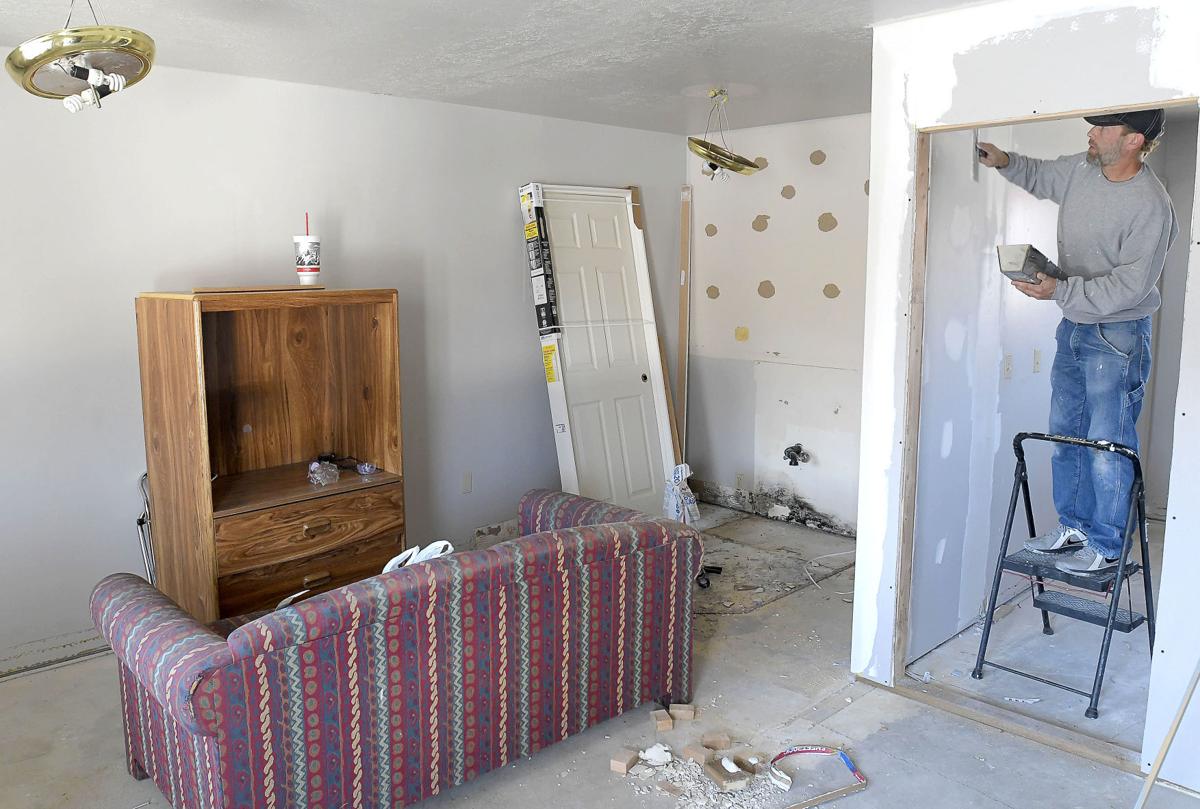 Mike Leach renovates a room at the Ville 364 apartment complex on Thursday in Logan. 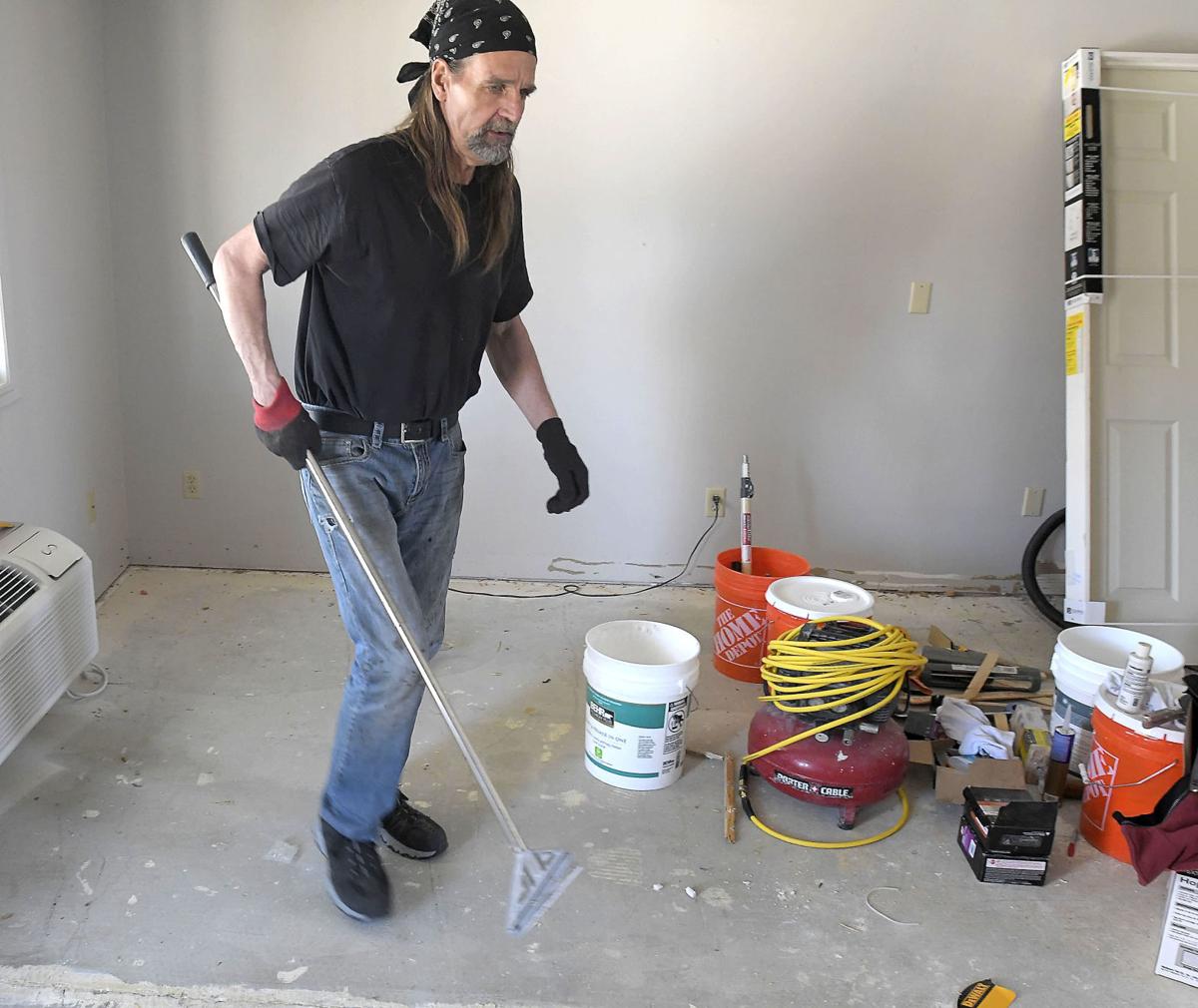 Big J renovates an apartment at Ville 364 on Thursday in Logan. 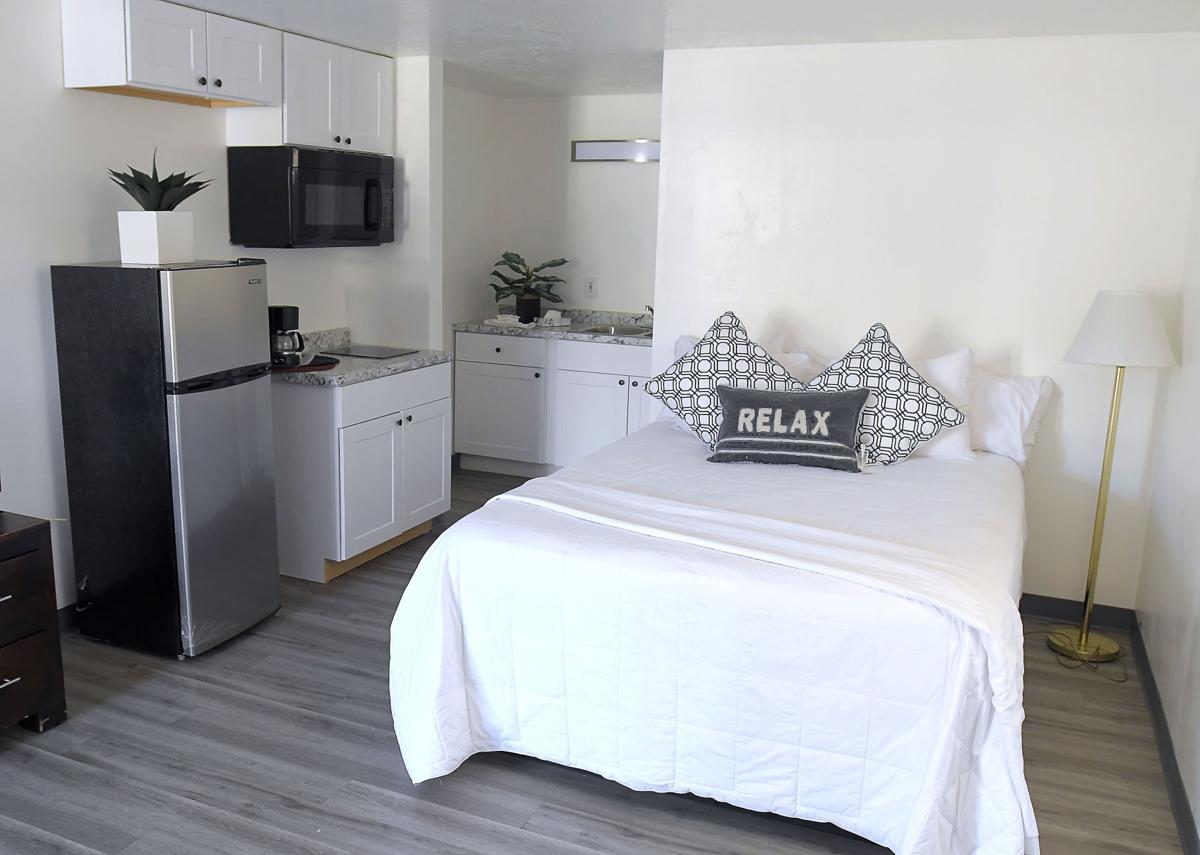 A finished room at the Ville 364 apartment complex as seen on Thursday. 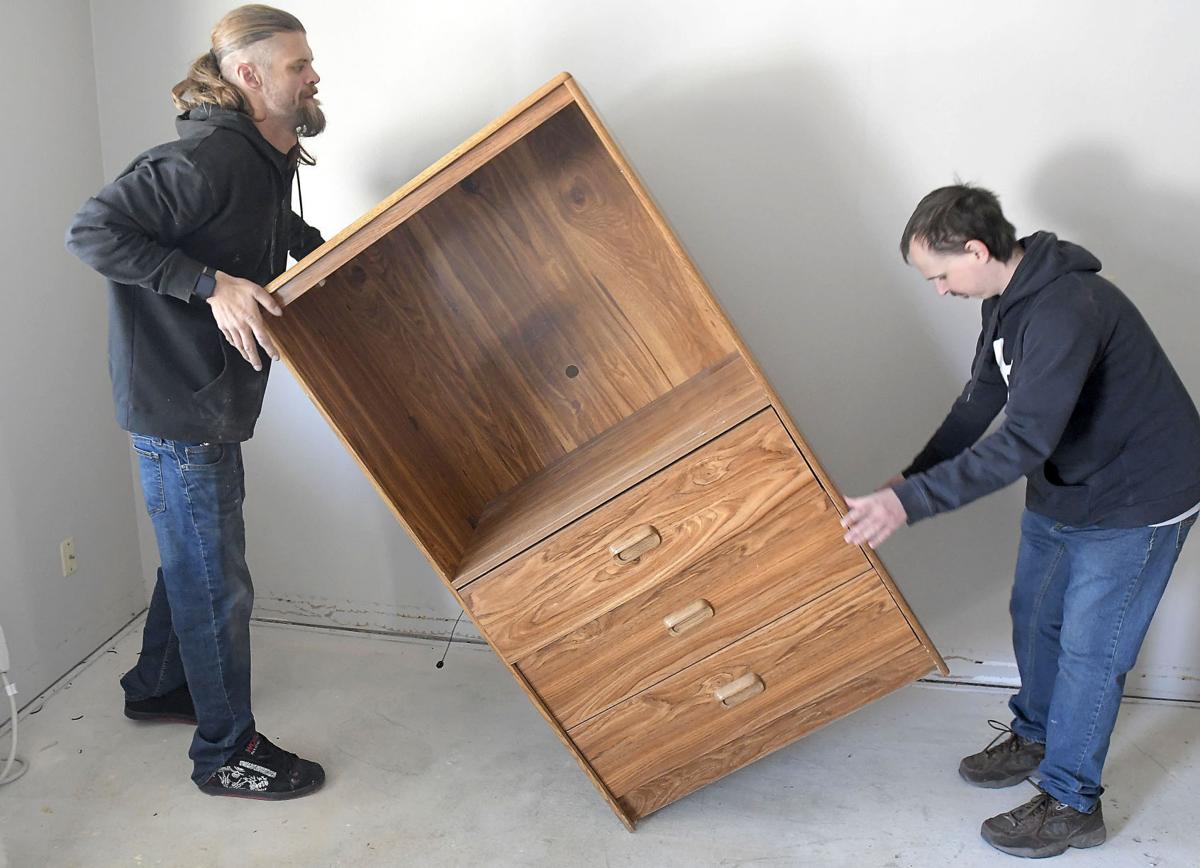 James Swanson, left, and Mckay Nielson move furniture out of an apartment at Ville 364 on Thursday in Logan.

Mike Leach renovates a room at the Ville 364 apartment complex on Thursday in Logan.

Big J renovates an apartment at Ville 364 on Thursday in Logan.

A finished room at the Ville 364 apartment complex as seen on Thursday.

James Swanson, left, and Mckay Nielson move furniture out of an apartment at Ville 364 on Thursday in Logan.

David Groger had been living in a tent for well over a year before finding a home at the newly established Ville 364, formerly the Econolodge, in Logan.

For Groger, it was one of many answers to his prayers.

Groger said his life hit a wall when his eldest daughter was killed in September 2016, and his then 17-year-old grandson was wrongfully accused of the murder. After a contentious divorce, serious medical issues, as well as extensive alcohol use and brushes with the law that resulted in felony charges — reportedly in Utah and Montana — Groger found himself in dire straits. He eventually sold his fifth-wheel camper to pay back debts and, Groger said, to prove a point.

“I’m an old tramp, but my word is good,” Groger said. “Nobody owes me nothing, but myself.”

Now, Groger, 61, says he’s trying to get his life back together after living in his “hobbit hut” in various locations in Cache Valley. Groger said “through BRAG and the veteran’s outreach,” he’s very grateful to have a place to call home.

“To have a place, and for these people to be kind to me — I’m giving back,” Groger said, explaining he assists with renovation of new units and other duties around Ville 364. “They’re giving me a chance at life again. And I want to live … I’m old. I’m not promised tomorrow, I can’t change yesterday, and I can’t start the future — all I can do is live today.”

Keith Warburton, an owner of Ville 364, said the Econolodge was viewed as an opportunity to turn an underutilized hospitality property into affordable housing. Renovations began in January and they have since restored 44 units. Each unit’s renovation costs around $7,000, Warburton said, and the available units are already occupied.

“I think we’ll be full in 90 days,” Warburton said. “There’s a tremendous demand.”

“The surrounding towns around Logan, and Logan itself, obviously have a very high demand for housing,” Warburton said, explaining rising housing costs don’t correlate with wages. “You start to see that there becomes a significant gap in the ability for people to become housed.”

Those with poor credit or criminal histories can also face barriers to finding housing, resulting in expensive alternatives. Some of the residents at the former Econolodge were paying around $1,700 a month — a price that has now been reduced by more than half, according to Warburton. Ville 364 does not perform criminal background or credit checks; they require a double deposit and month-to-month rent.

“If somebody has a criminal record or they’ve had a prior eviction, most people won’t rent to them,” Warburton said. “In my opinion, it’s an unbelievably great opportunity to help people be housed.”

Paul Davis, the business outreach specialist at the Bear River Association of Governments, said the location satisfies all identified challenges and meets the state recommendations for affordable housing.

“There’s a bus stop right out front — they don’t have to have a car,” Davis said, “and if they need food they can walk across the street and get it from the food pantry.”

“I would say it’s safer being with us than it is being homeless,” Warburton said. “It takes people out of a situation of trauma and puts them in a situation of security.”

For Davis, the question is where will people stay if affordable housing isn’t available.

“We complain about them sleeping in cars, there are people who have had tickets for parking their car on private property and sleeping, they (are) sleeping in storage units, or they end up in a homeless shelter,” Davis said. “And, realistically, a homeless shelter is a Band-aid; it is not a solution.”

For Groger, there’s a stigma in Cache Valley regarding people without homes.

“They don’t like homeless people,” Groger said. “There’s no crime here, so they make up their own rules.”

Groger said he would like to see others help one another in lieu of pushing them down.

Warburton said his first affordable housing property was a hotel in West Haven purchased in March 2020. Since then, he is now involved in six similar properties throughout Utah.

He said all of the properties are at 100 percent occupancy.

“I bought my first property the day before Rudy Gobert announced that he had COVID and shut down the world,” Warburton said with a laugh, explaining that he was able to seamlessly integrate live-event construction crews from Las Vegas to participate in the renovations. “They were out of work in a day.”

The properties proved fruitful — both business-wise and for the tenants who’ve come to appreciate the opportunity for housing, Warburton said. It’s also a boon for cities that would spend an estimated $10 million and three years of work to build a similar location from scratch, according to Warburton.

“I think it’s a tremendous thing for Logan and Cache County,” Warburton said, heaping praise on local veterans groups, churches and government agencies for their efforts. “All of Cache County should be proud of their organizations — they were good before we showed up.”