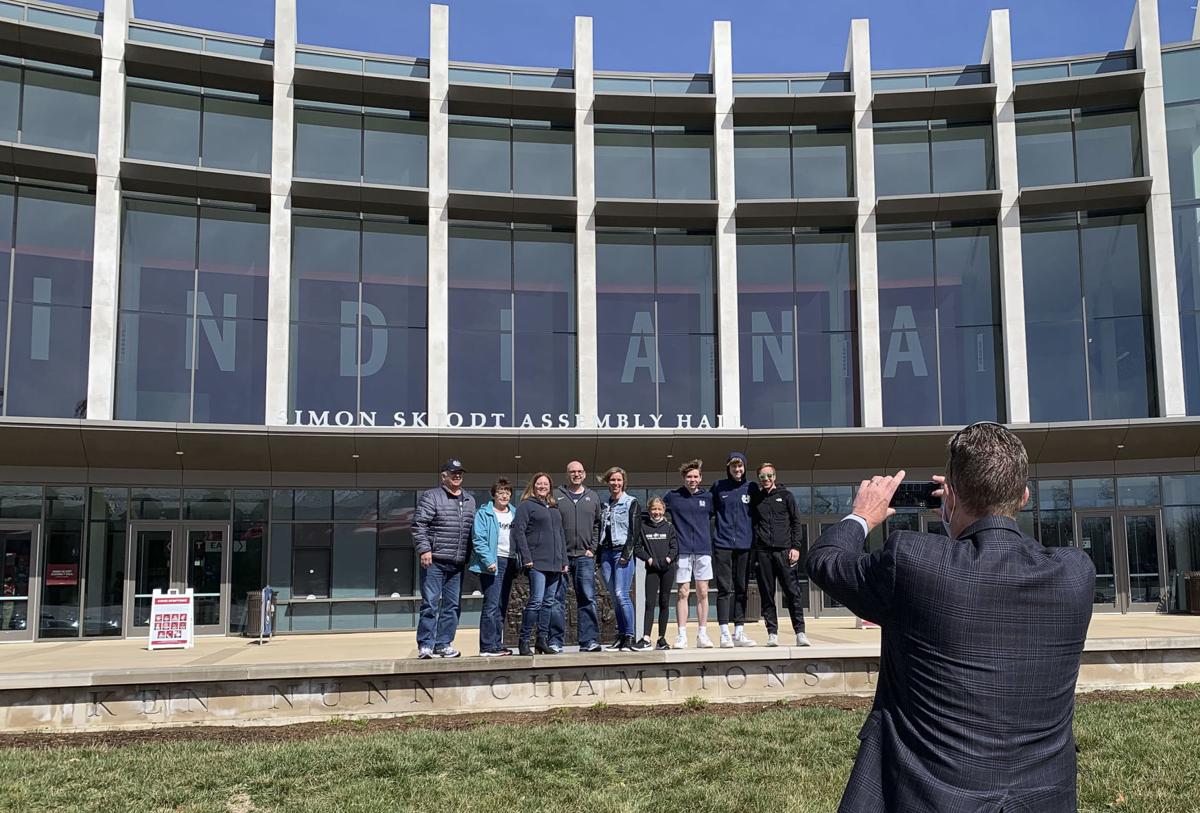 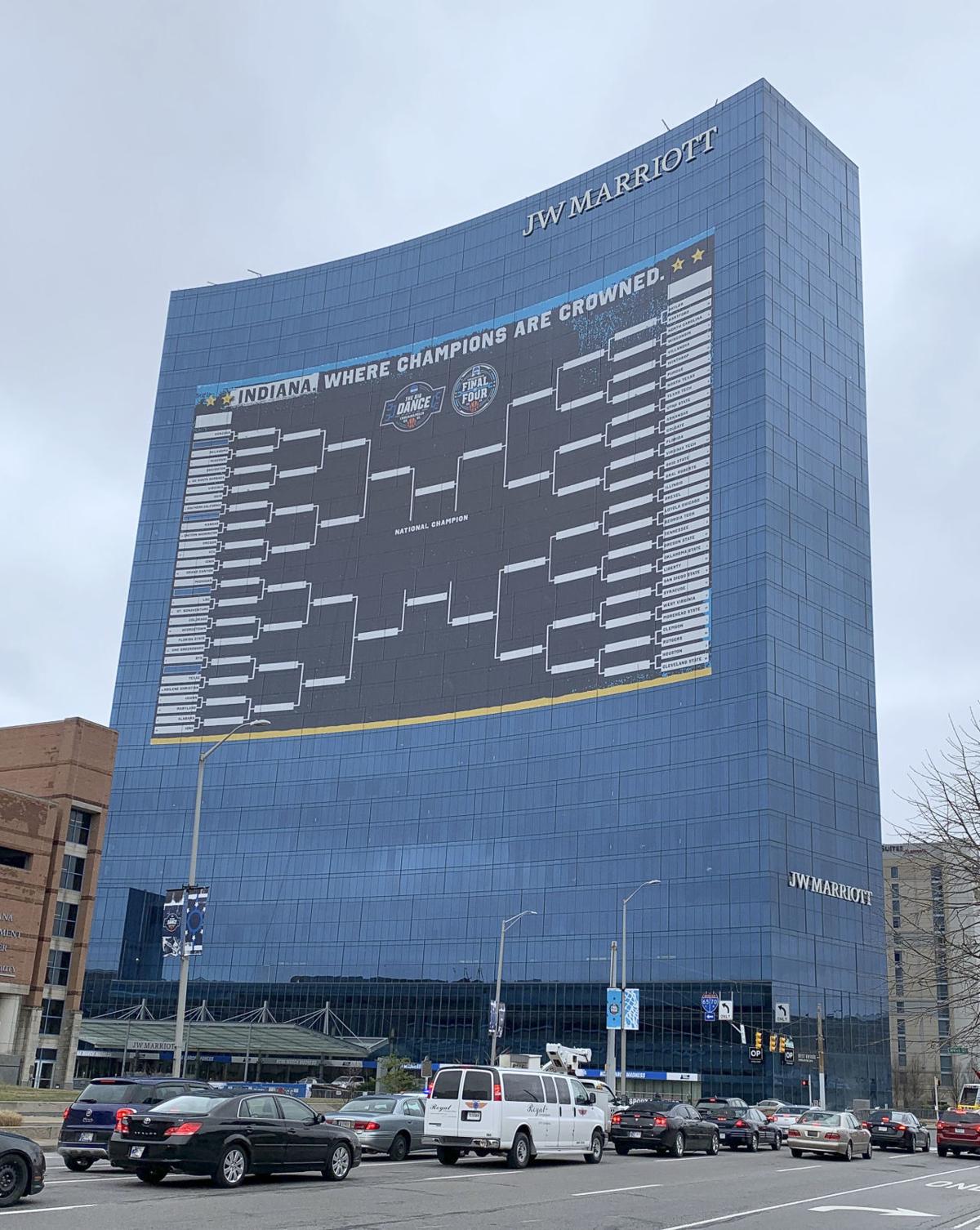 In downtown Indianapolis, the bracket for the NCAA Tournament is on the side of the Marriott hotel. 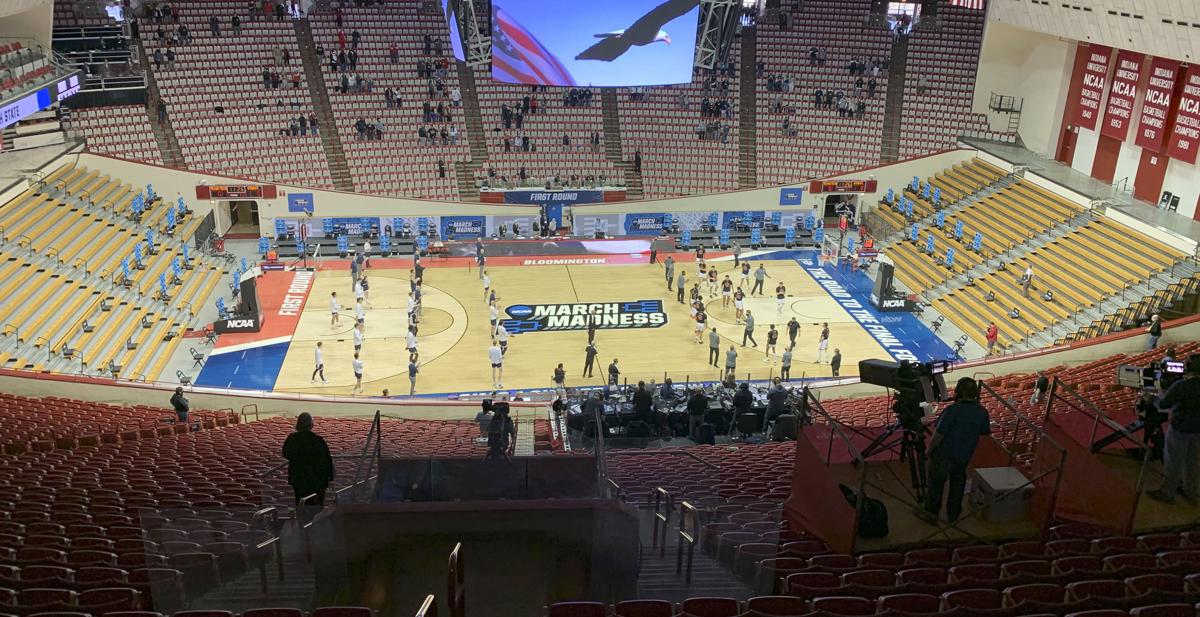 The 500 fans allowed into Assembly Hall stand for the National Anthem as do the teams.

In downtown Indianapolis, the bracket for the NCAA Tournament is on the side of the Marriott hotel.

The 500 fans allowed into Assembly Hall stand for the National Anthem as do the teams.

BLOOMINGTON, Ind. — Aggie fans were hoping the 22nd appearance in the NCAA Men’s Basketball Tournament would be something special.

Before the game, those lucky enough to get a ticket entered Assembly Hall on the campus of Indiana University with high spirits. Only 500 fans were allowed into the 17,222-seat arena as 250 were allotted to each school.

Utah State was the 11th seed in the South Region and faced No. 21 and sixth-seeded Texas Tech. Due to COVID-19, the entire NCAA Tournament is taking place in the state of Indiana this year, mostly around Indianapolis. There are six different sites playing host to the 68 teams and the 67 games that will be played.

“The last time the Final Four was in Indianapolis, me and my family came and had a blast,” former Aggie and now booster Nate Wickizer said. “But to have all of the teams here has been exciting. I don’t know how they have done it logistically, but it’s been pretty amazing to see them pull it off.”

For the ninth straight time, the Aggies lost in the first round. The Red Raiders used a big second half to overcome a deficit and win, 65-53.

Many of the fans that got tickets were family members of players. Each athlete on both teams was allowed to have four tickets.

Wickizer, who played at USU from 1992-95, also has a son on the team. Freshman forward Matthew Wickizer has seen action in 11 games this year.

“It’s really fun to have a son in the program and see the success that this coaching staff has had,” Wickizer said. “To have him be part of the team is exciting. We were little nervous with how the season started, but it’s unbelievable how they have come together as a team and really pulled it together to have a wonderful season.”

The last time USU tasted victory at the Big Dance was in 2001. That year the Aggies were a 12 seed and upset Ohio State in overtime, 77-68.

USU had qualified for the NCAA Tournament for the third straight year, which has only happened one other time in the history of the school (2009-11). However, the Aggies did not play last year as the entire tournament was canceled before it began because of COVID.

“This is really big for us because we were going to go last year for our first time and COVID hit so we didn’t get to go,” said Shawn Henry, the stepfather of USU senior Alphonso Anderson. “This year is pretty big, because this is one of his ultimate goals to be here.”

Henry, like most Aggie fans on Friday, was in full USU gear. He also was wearing a No. 10 jersey.

“We all have jerseys, so I would hope we would all wear them,” said Henry, who flew to the Hoosier State from Seattle. “He (Anderson) got them for us for Christmas as a gift.”

Henry and Wickizer had faith the Aggies would win a game or two and shock some people.

“They like being the underdog and shocking people,” Henry said.

Unlike his son, who has now been part of a team that made it to the NCAA Tournament, the senior Wickizer was only able to play in the NIT with the Aggies.

“One thing I like about this coaching staff is the energy they bring, the way they keep the boys upbeat and positive. It’s fun to see what they have been able to do for the program.”

His 6-foot-9 son has been having a great experience at USU.

“He loves it,” Wickizer said. “Recently off a (Latter-day Saint) mission, he is trying to get his legs under him and come back and contribute in any way possible. I continuously tell him everyone has their role. Anything you can do to help the team be successful is what you have to do.”

Anderson has also enjoyed his time at USU and has been a valuable member of two successful Aggie teams. He was recently awarded the Sixth Man of the Year in the Mountain West Conference.

“That was great,” Henry said. “He is a pretty good player and could probably start on other teams. Getting the Sixth Man was awesome for him and gave him a little more confidence.”

Anderson played in all 29 games this year for the Aggies, starting four. He has seen action in 63 games during his USU career.

With the success the past three years, fans and parents of players are hoping Smith stays at USU and doesn’t leave.

“This coaching staff has been here three years and all three years to be in the postseason in the NCAA is unbelievable,” Wickizer said. “That’s a great accomplishment. I think they have the right combination of coaches and players. Everyone is willing to play their role to help the team be successful. I think it’s phenomenal.

“… Hopefully, he can learn from everybody that went before him that have said leaving Logan was the worst thing they ever did. We would love to see him here for a lot of years to come.”