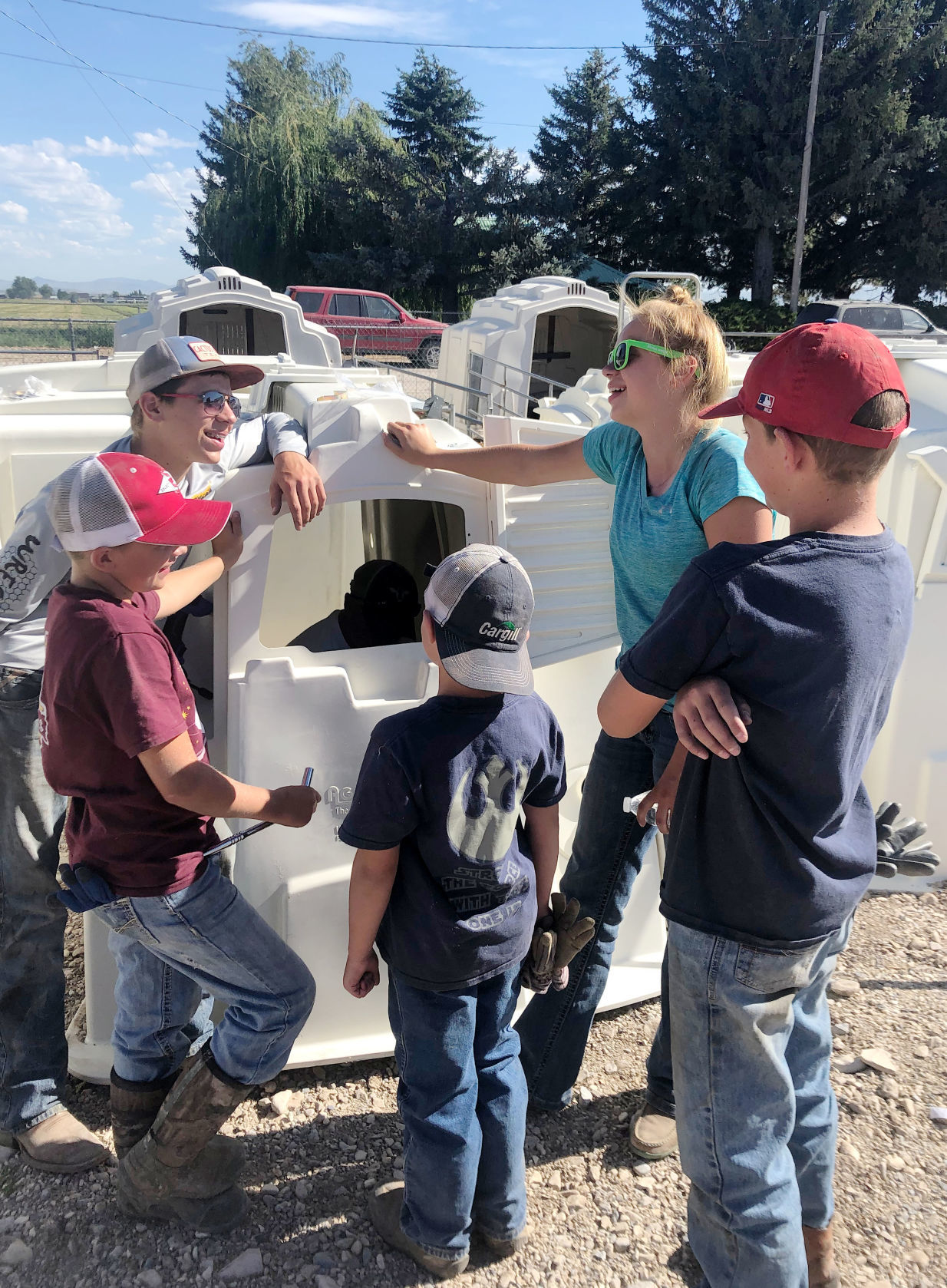 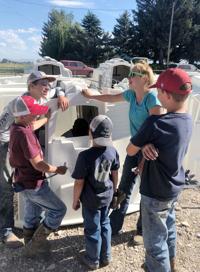 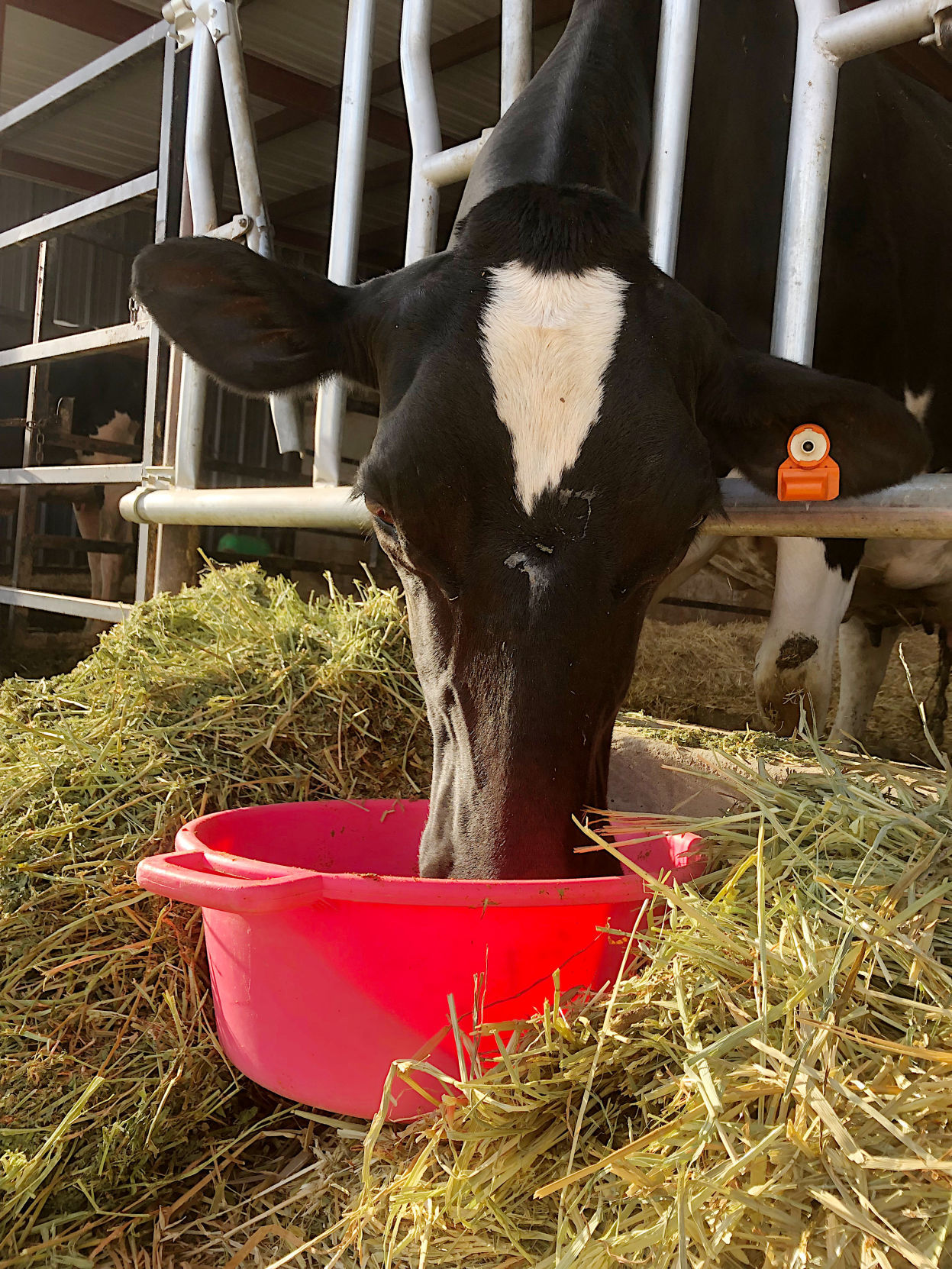 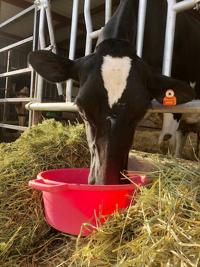 One afternoon last summer, 13-year-old Trey Leak gazed out the window of his family’s Cornish home toward their calf barn, a mile away.

The usual sight of calves sauntering around outside their hutches in the warm daytime was replaced by billowy smoke and bright flames.

Trey screamed for his sleeping family to wake up from their naps, but the smoke-filled barn and hay smoldered to ash in minutes.

Matt and Lena Leak and their five children sprung into action, hopped in vehicles, and made a mad dash to save the 20 calves bellowing in hutches under the burning hay barn.

One calf was initially the only loss reported, but as the days passed, four more deaths followed from smoke inhalation.

The Leaks’ oldest daughter, Madison, has spent much of her life working alongside her brothers stacking hay, doctoring sick cows and showing heifers. She is not immune to the constant challenges her family has experienced as dairy farmers and knows the struggles that will undoubtedly follow them into the future of the industry. Yet she is undeterred.

“It was devastating to see all of our hard work go up in smoke,” she said. “We had to continue doing all of our regular chores as well as start cleaning up the mess the fire had left.”

But they did it together. And Madison believes her family was stronger for having been through that experience.

But the fire wasn’t the only challenge the Leaks have faced in recent years, as they’ve fought to sustain a way of life they share with some 37,000 other dairy farmers in the United States.

After the flames his neighbors’ property, Colton Creech watched the Leaks deal with the aftermath.

“I think a lot of people could have hung their heads,” Creech said. “But not the Leaks. They were already making plans for how they are going to rebuild.”

Rob Smith, a friend and Farm Bureau associate of the Leaks, saw the same sort of resolve. And he wasn’t surprised.

“I would describe them as a close-knit family,” he said. “I’ve seen them devote quite a bit of time, energy and resources to volunteering. They are good managers, always looking for ways to do things better.”

In an ever-changing industry, so much rests on the shoulders of those making decisions that it might not matter if the Leaks do everything right.

There are many things out of their hands that could be every bit as devastating as a fire, and even more. Trade policies. Milk alternatives. It’s a perfect storm.

Amy Gittens, a dairy farmer for the past 15 years and a friend of the Leaks, has found that the only constant is change.

All of these factors together could mean the disappearance of smaller dairy farms not just in Utah, but across the United States.

With a shift in the number of people involved in agriculture, Lena Leak spends her days wondering if the endless paperwork piled up on her desk will be worth the headache in 20 years when her children are grown and have the choice to return to the farm.

Will her four sons and daughter take an interest in the herd, or will the sentimentality she regards for passing on the farm be replaced with other careers, driven by technology and engineering?

As Matt Leak stood next to his cows after the completion of their new free-stall barn, the reminder of their pedigrees comes flooding back. With one look at the bright yellow ear tag of one older Holstein, he knows exactly who she is, and how old she is.

In fact, she’s been in the family for as long as Matt can remember. She’s been in the show ring more times than can be counted. Her progeny spans generations. She could be considered Matt’s pride and joy.

“For me, my love of dairy is not just rolling cows through and making milk,” he said. “Each cow has a story, and if I had to get up in the morning to feed just a bunch of cows that I don’t really care about, I wouldn’t do it.”

Many farms have closed their barn doors, and the lingering question farmers have to ask is “what’s next?”

“Everything is going to larger dairies,” he said. “And the family farm is going away.”

Driven by large factory farms, the industry has become more efficient in recent years. Today’s farmers know how to produce more milk per cow. On its face, that’s good, but it means there is less margin in their practices.

Matt Leak believes the milk he’s producing is better than it has ever been. But quality is meaningless without a market for it.

“Exports are down, and if you can’t get your exports up, then your domestic use is going to be limited,” he said. “We have more cows and more milk than what the U.S. can use, and if we don’t export, we’re in trouble.”

Efficiency has driven tighter margins in the domestic market, too, with returns too small to cover some farmers’ bills, forcing restructuring, consolidation and shuttering of farms.

More than 2,700 U.S. dairy farms were shut down in 2018, according to federal reports. The United States Department of Agriculture tallies just 37,468 licensed dairy farms in the country.

For now, at least the Leaks are insulated. There has never been a time when Logan-based Gossner Foods, one of the largest Swiss cheese manufacturers in the United States, wouldn’t take the family’s milk in times of surplus.

“They find new ways to market our products, whether it be a new sandwich at Wendy’s and McDonalds to new packaging for cheeses for other restaurants,” Lena Leak said.

The Leaks are grateful to Gossner’s willingness to work with them as producers.

Some dairy farmers, like Franklin County commissioner Dirk Bowles, have chosen to invest in avenues that protect his commercial dairy prices in order to avoid the potential of shutdown.

Price contract negotiations, revenue protection plans and crop insurance are just a few of the ways Bowles is focused on avoiding pitfalls and is able to keep his business running.

“The mentality we have tried to adopt is if we can guarantee that we’re going to make money, we’ll be here tomorrow,” Bowles said. “If we don’t guarantee that and we lose money, we might not be in the industry tomorrow.”

But what good are price guarantees if there is no demand at all for milk from cows? That might have been a silly question to ask just a few years ago. But it’s not anymore.

As Matt Leak sat at his kitchen table to unwind for the night and catch up with his sons, he Googled the “Impossible Burger.” Lengthy discussion had been posed by several colleagues in the annual meetings for DairyWest, where concerns of the industry were laid on the table.

He slowed down to make out the next one.

His children and wife listened intently as they try to make sense of the lab-produced, plant-based alternative to a hamburger.

A few more ingredients down the list, the kids’ faces shift from curious to disgusted.

Several of the children groan in disgust.

Burger King recently added the Impossible Whopper — a plant-based recreation of a hamburger patty that mimics the taste and texture of the original — to its menus across the nation. According to one analysis, the result was a 6% growth in sales.

Could milk come from anything but a cow? The kids aren’t convinced.

“How could anyone drink that?” one of the children asks. Another child nods in agreement as his lips touch a glass of milk straight from his family’s milk tank.

But Matt Leak isn’t just grossed out by the idea — he’s nervous about it.

“If people continue to make more alternatives for meats and milk, then usage, need and desire for those products will go down,” he said.

Madison, Stockton, Kael, Trey and Kayson Leak look on with their backs against the wind as they survey the damage, shortly after the fire.

The charcoaled blackness. The bellowing of cows in the distance. Their once-majestic hay barn was now a pile of smolder and tin. Their family had survived this challenge. But the children already know that there are more to come.

It’s just another day in the life of a dairy farmer’s kid.