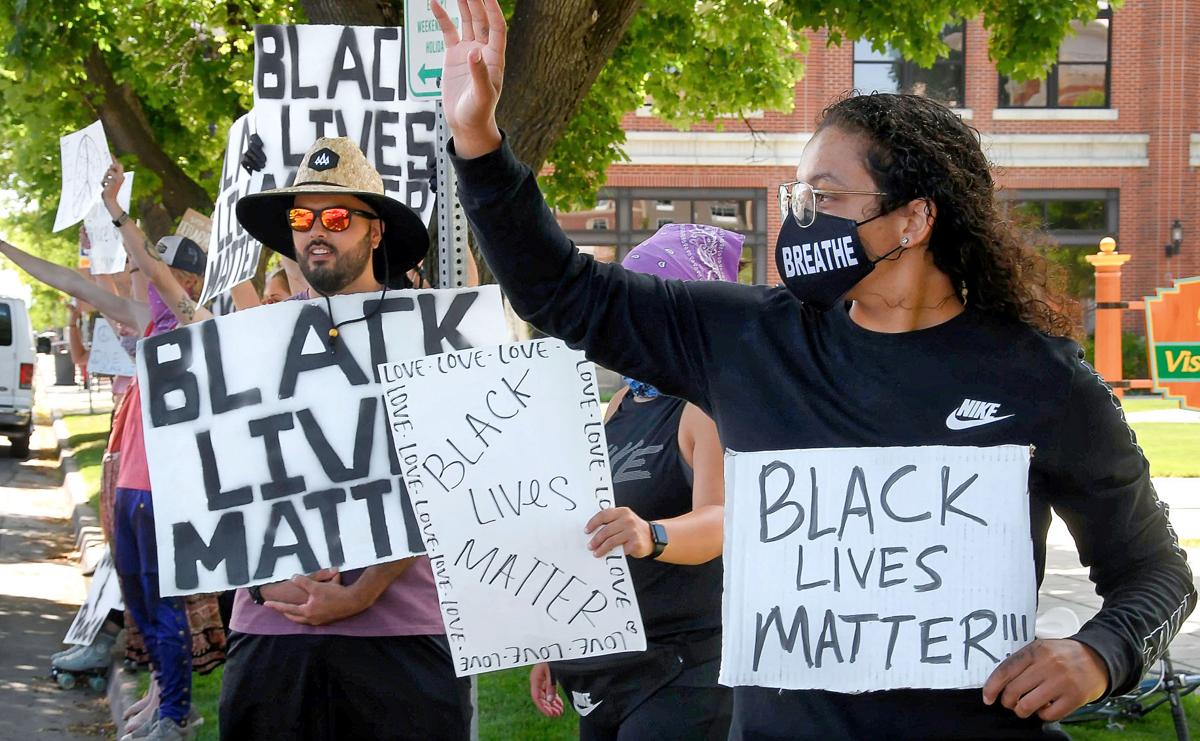 Kylie Jackson, right, and other protesters peacefully assemble in front of the Historic Courthouse on Main Street in Logan on Tuesday. 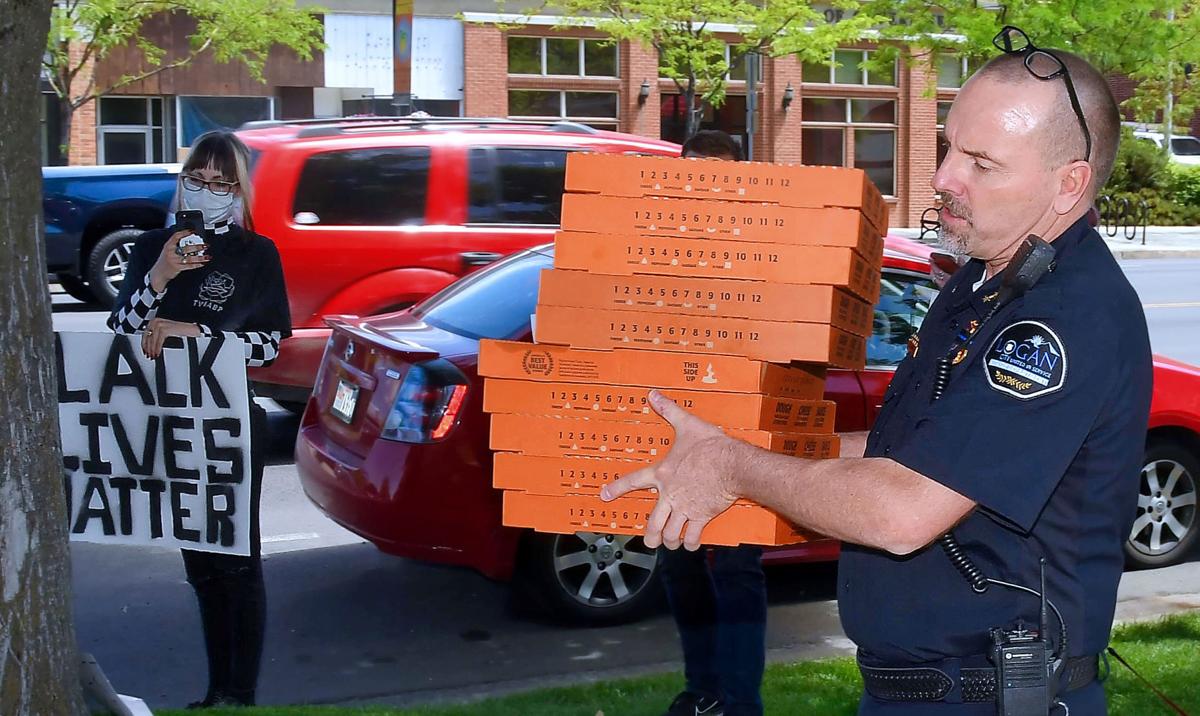 Logan Police Assistant Chief Jeff Simmons delivers pizza to protesters as they peacefully assemble in front of the Historic Courthouse on Main Street in Logan on Tuesday.

Kylie Jackson, right, and other protesters peacefully assemble in front of the Historic Courthouse on Main Street in Logan on Tuesday.

Logan Police Assistant Chief Jeff Simmons delivers pizza to protesters as they peacefully assemble in front of the Historic Courthouse on Main Street in Logan on Tuesday.

About two dozen people at the Historic Cache County Courthouse on Tuesday afternoon held signs toward Main Street motorists to protest police brutality and systemic racism toward black Americans. Toward 6 p.m., that number had grown to more than 100.

A similar protest had been planned for Tuesday but was canceled over coronavirus concerns. Christopher Rojas, who lives in Salt Lake City currently but resided in Cache Valley for several years, saw the cancellation and decided to come to Logan and protest anyway.

“I expected to be alone for a long time today,” Rojas said about starting the demonstration at 10 a.m. “But then within 15 minutes today, somebody saw me and they just pulled over. … They just came and picked up one of my signs and stood there.”

Most of the reactions the demonstrators got from passing motorists were honks and gestures of apparent support. Comparatively, a few revved engines loudly, “rolled coal” — releasing large, black clouds of truck exhaust — made rude gestures or shouted the anti-Black Lives Matter slogan “All Lives Matter.”

One man in a passing car shouted “All Lives Matter” at the crowd, but as the crowd began shouting back, a woman in the car reached over the man and rolled his window up.

Protesters mostly held signs toward Main Street and cheered when cars honked, but they occasionally led chants of “black lives matter,” “no justice, no peace,” and others. In the evening, demonstrators wrote chalk messages on the sidewalks and concrete pillars in front of the courthouse.

The protests come amid nationwide demonstrations in response to the killing of George Floyd last week. A video of Minneapolis police officer Derek Chauvin kneeling on Floyd’s neck for several minutes while the latter said “I can’t breathe” went viral, touching off protests in cities across the nation.

Jensen said Logan Police wanted to use their standing in the community to support the protesters.

“The irony of this whole thing is we, the police, are hurting about this whole thing as well,” Jensen said. “And so this message is not foreign to us. It’s a message that we feel in our hearts, as well. We wish that wouldn’t have happened to George Floyd.”

“I think it’s good because it shows that at least our police department is aware of and empathetic with the other side,” Pond said. “And they understand, they have the humility to kind of see that police brutality is an issue and that they’re choosing to be above that, that tendency.”

Pond says he believes that acknowledgement and support like LCPD showed is what’s going to keep protests from escalating.

“They’re not going to see themselves as above the law,” Pond said. “They’re here to extend an olive branch to let us be supported. And I think more of that is what’s going to bring peace and cause rallies, not rubber bullets and tear gas.”

“Can you believe that, man?” he said when asked about the gesture. “Holy cow. I mean, I was hoping for that.”

Rojas said it was a tense moment when police originally showed up before he could see their intentions, but he believed things would stay calm in Logan.

“For a second, it was like, ‘Dang, we’re not even doing anything,’” Rojas said. “But we’re within our constitutional rights to peacefully protest. And, well then, those officers knew it. They saw it. And they know their city. They know their city; they know nothing that crazy is going to happen here. So that was way cool.”

While most demonstrators in the U.S. have been peaceful, in many cities, protests escalated into violence, with police shoving protesters or firing tear gas and rubber bullets into crowds and people burning cars and buildings in the worst instances.

Rojas said at Saturday’s protests in Salt Lake, he was “on the front lines the whole time, and it was peaceful until the riot gear came out.”

“It was peaceful until the officers started bringing out their riot gear and started just shooting away with the rubber pellets and tear gas,” Rojas said. “They just automatically thought we were just going right at them. They didn’t even give us a chance. If they probably would’ve came out with a flower on them, without their batons or their freaking guns, it probably would’ve been as peaceful as everyone wanted it to be.”

Logan Police weren’t the only ones who dropped off supplies to the protesters. Rojas said he brought water and granola at 10 a.m., and he never thought that others would donate more food and drink throughout the day. LCPD’s eight Little Caesar’s pizzas were added to a stack of about eight there already. By 6 p.m., the protest had about eight unopened 40-packs of bottled water.

Jensen said LCPD were aware of the earlier protest planned in Logan and of nationwide tensions.

“We were obviously hoping for peaceable protests, which clearly it is,” Jensen said. “So it’s all good.”

Issam Bouhaddaoui is originally from Morocco but has lived in Logan for about seven years.

“African Americans are Americans, too,” Bouhaddaoui said. “And they are my brothers, before anything else. I’m from Africa, and I know their struggle, I think, more than anyone else.”

People have suffered from discrimination and police violence in Morocco, too, he said.

“If you do not speak when it’s wrong, you are part of the wrong,” Bouhaddaoui said.

Cori Smith moved to Logan from Seattle about two years ago. She said about five years ago in Seattle, she joined demonstrations against police brutality targeting black people.

While most protesters wore face masks as a precaution against the coronavirus pandemic, most stood shoulder-to-shoulder. The close contact as well as the size of the gathering itself were in violation of Utah’s coronavirus recommendations as the number of confirmed cases in Cache County has risen rapidly.

Some of the demonstrators said they plan to be back at the Historic Courthouse at 11 on Saturday morning.