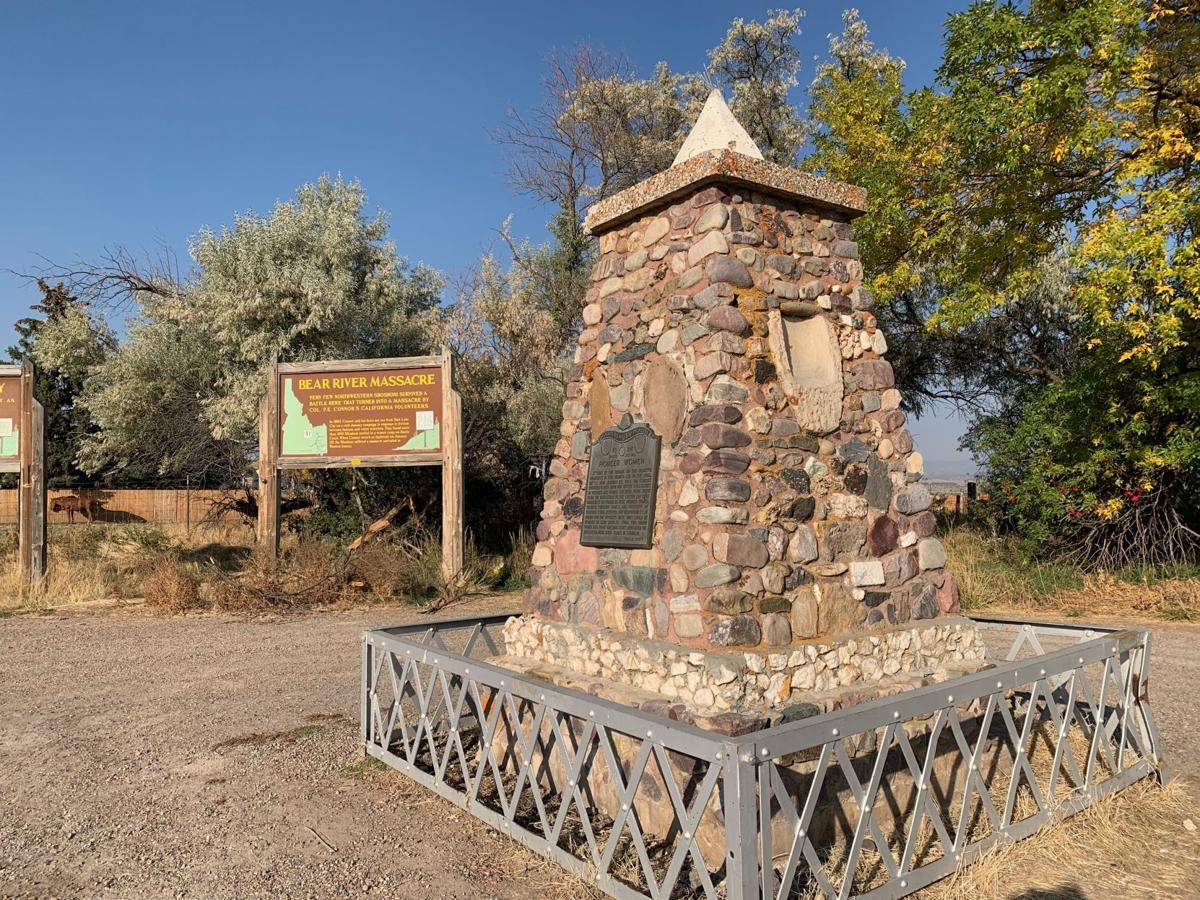 This monument, erected by the Daughters of Utah Pioneers in 1932, will receive a new plaque, “more accurately” telling what happened at the Bear River Massacre in 1863. 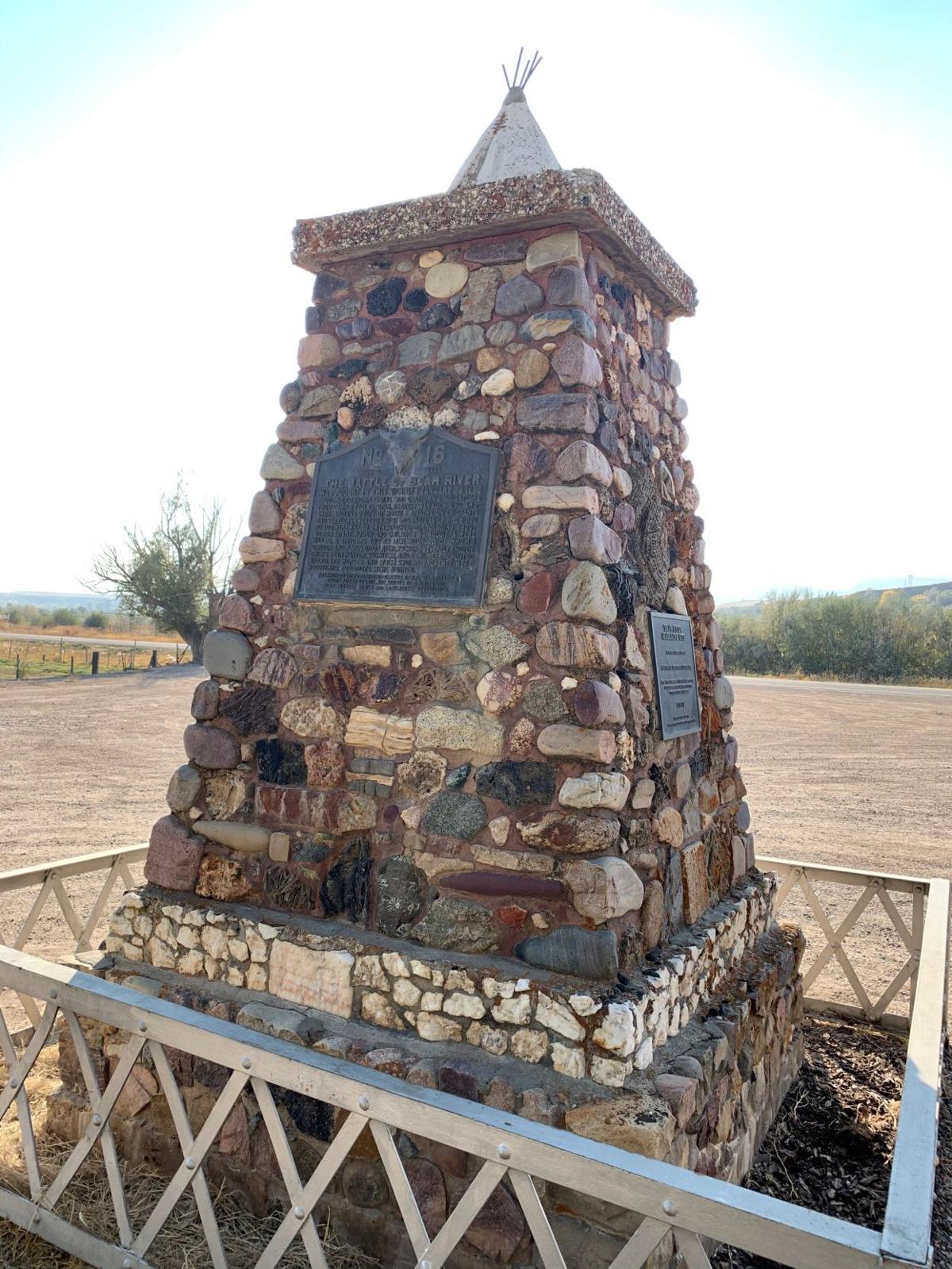 A new plaque will “more accurately” tell of the Bear River Massacre, marked by this monument, which was erected in 1932 by the Daughters of the Utah Pioneers. 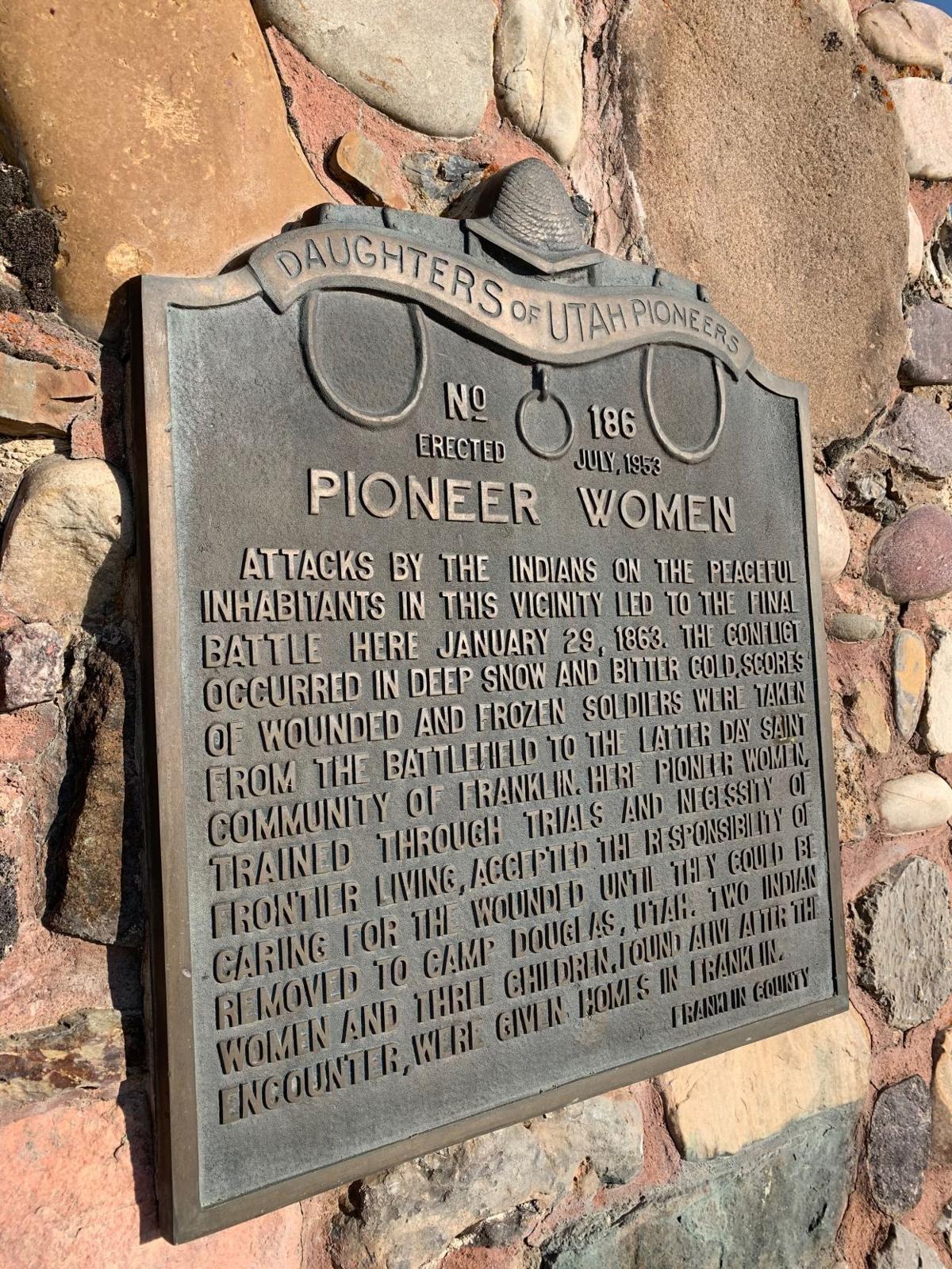 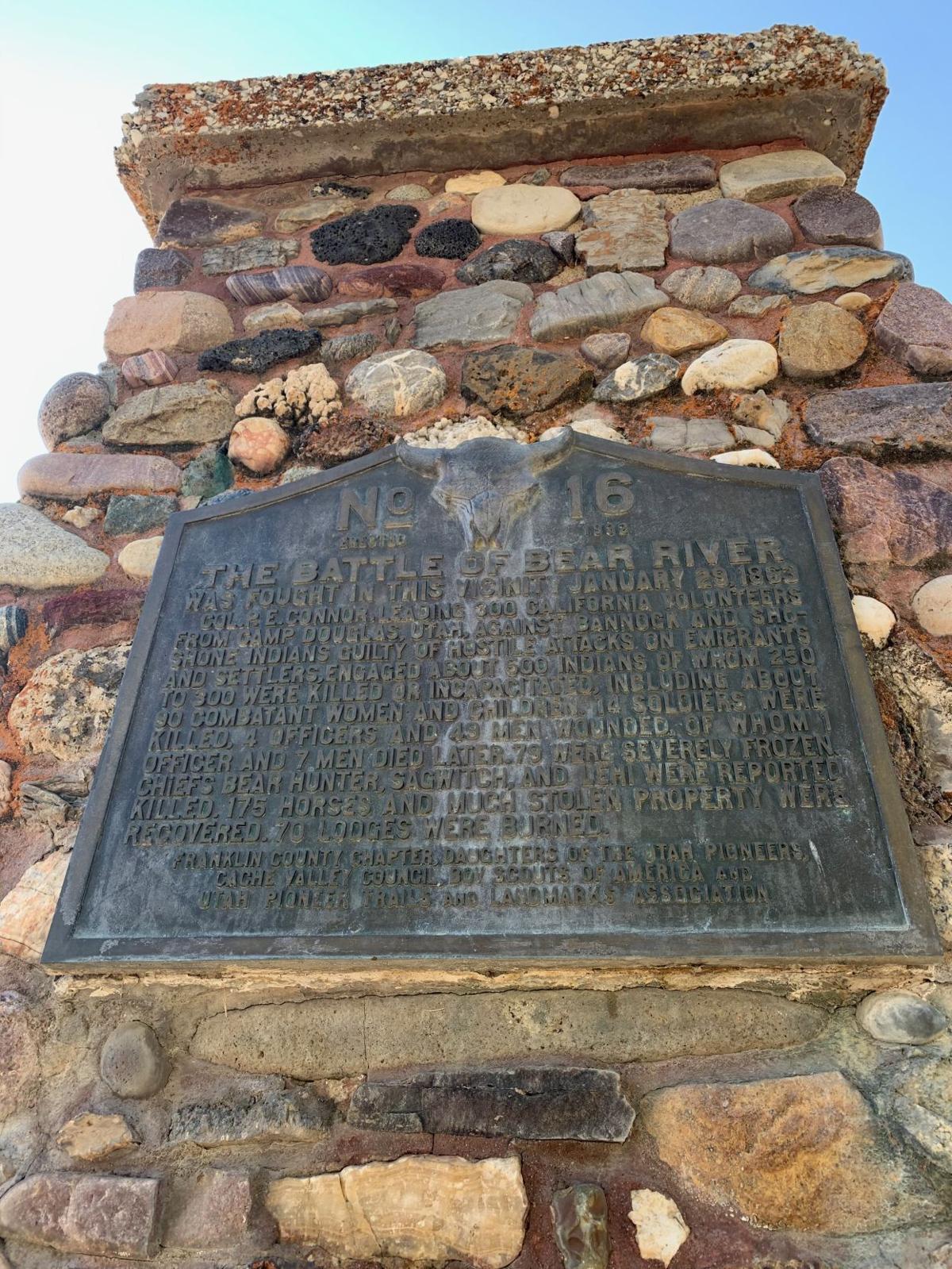 This monument, erected by the Daughters of Utah Pioneers in 1932, will receive a new plaque, “more accurately” telling what happened at the Bear River Massacre in 1863.

A new plaque will “more accurately” tell of the Bear River Massacre, marked by this monument, which was erected in 1932 by the Daughters of the Utah Pioneers.

A new plaque has been approved and ordered to replace what the local organization of the Daughters of the Utah Pioneers is calling “the inadequate 1932 version on the Bear River Massacre Monument.”

“The Daughters of Utah Pioneers (DUP) are happy to announce that it should come in time for unveiling at the January 29, 2021, Northwestern Shoshone Memorial Service to honor the Indians slain in the 1863 encounter with Colonel Patrick Connor’s California Volunteers. The plaque has been approved by Darren Parry, a past leader of the NW Shoshone tribal council and advocate for his people,” said DUP Company president Alexis Beckstead.

“When I started attending the Massacre Memorials after I became DUP president,” Beckstead said, “it was quite clear that the Shoshone were not happy with our plaque. I couldn’t stand the thought of anyone thinking ill of our society, so I did a great deal of research on the massacre and asked our Salt Lake Central board to consider allowing an additional plaque, assuming they would not want to take off the old one. President Ellen Jeppson surprised me by saying, ‘If the old plaque is wrong, let’s get rid of it and put up a new one. We want to get history right.’”

Beckstead was pleased and so was her supportive company board. The new plaque will state the following:

In memory of the estimated four hundred men, women and children of the Northwestern Shoshone Nation who were brutally massacred in this vicinity January 29, 1863, by the U.S. Army California Volunteers from Fort Douglas, Utah, under the command of Colonel Patrick E. Connor. The attack took place in the early morning hours against a group of people with limited defense and without peaceful means first being sought when a conflict arose. Twenty-three soldiers died as a result of the encounter. Chief Sagwitch and other survivors joined The Church of Jesus Christ of Latter-day Saints, established a thriving farming community known as Washakie, and many helped build the Logan Temple.

“It’s wonderful to see and it is long overdue,” said Parry. “They went above and beyond. I wasn’t so much for the removal of the plaque but was for putting up another one to give the historical perspective. ... I’m looking forward to when they put that up and to share with the community what happened.”

The 1932 version that is currently on the memorial “was written by a leading citizen in Preston at a time when there was limited information about the event, especially from the Shoshone point of view. Many details are inaccurate and no mention is made of the Indians’ side of the story,” Beckstead said.

In 1989, historian Richard Dunkley who had thoroughly researched the massacre, approached the DUP board and asked that the plaque be changed to give a truer version of the massacre. Mae Timbimboo Parry, granddaughter of survivor Chief Sagwitch, also sent a letter at that time to the local DUP president asking that a new plaque be added with the Shoshone viewpoint. According to DUP minutes, the company board was about to go out, and it was decided that the new county board should meet with Mrs. Parry to discuss the matter.

“Apparently, this communication did not take place,” said Beckstead.

From 1985 to 1990, Allie Hansen of Preston labored with a committee of area residents under the auspices of the Bear River Resource Conservation District to garner National Landmark status for the site so the name of the area could officially be changed from Bear River Battle to Bear River Massacre.

“This is great. This is a truer account than many that have been put forth before now,” said Hansen. As part of her work, the National Park Service provided a grant for a survey of the site.

In 1995, the results of the survey study were sent to the Franklin County DUP president. “The price paid by the Shoshone in the settlement of Idaho and Utah remains unacknowledged. … The site should commemorate not only the pioneers and soldiers that participated in the massacre but also acknowledge the lives of the Shoshone people that are lost on its soil,” it stated. The report said that the area needed to be protected and that the DUP should “seek to balance the story of the massacre with greater emphasis on the Shoshone viewpoint than what has been presented in the past.”

“One might ask why a more accurate plaque had not been added long ago. There are probably two reasons: 1) Leaders were afraid to change something that had been written in the past, fearing they might be changing history, and 2) Leaders moved in and out of positions so quickly that they were often unaware of the situation, or felt new leaders should take care of it,” said Beckstead.

“The Daughters of Utah Pioneers regret that it took so long to represent the Northwestern Shoshone properly. They have, however, tried to do it in other ways,” she said. In 1975, Afton Ellis Beckstead of the DUP had the Shoshone Trail restored between Cub River and Bloomington. When it was finished, Native Americans were invited to walk the trail and eat a steak and potato meal afterward in celebration.

The DUP has sponsored many historical speakers to come into the area to talk about the Bear River Massacre, which led to people being more informed of Shoshone’s history. One of the local DUP camps is named Sacajawea. The DUP also has a Native American display in the Preston courthouse.

The text of the existing Bear River Massacre plaque, which mischaracterizes the event as a battle and contains several other historical inaccuracies, follows:

THE BATTLE OF BEAR RIVER WAS FOUGHT IN THIS VICINITY JANUARY 29, 1863. COL. P. E. CONNOR, LEADING 300 CALIFORNIA VOLUNTEERS FROM CAMP DOUGLAS, UTAH, AGAINST BANNOCK AND SHOSHONE INDIANS GUILTY OF HOSTILE ATTACKS ON EMIGRANTS AND SETTLERS, ENGAGED ABOUT 500 INDIANS OF WHOM 250 TO 300 WERE KILLED OR INCAPACITATED, INCLUDING ABOUT 90 COMBATANT WOMEN AND CHILDREN. 14 SOLDIERS WERE KILLED. 4 OFFICERS AND 49 MEN WOUNDED, OF WHOM 1 OFFICER AND 7 MEN DIED LATER. 79 WERE SEVERELY FROZEN. CHIEFS BEAR HUNTER, SAGWITCH AND LEHI WERE REPORTED KILLED. 175 HORSES AND MUCH STOLEN PROPERTY WERE RECOVERED. 70 LODGES WERE BURNED.

ATTACKS BY THE INDIANS OF THE PEACEFUL INHABITANTS IN THIS VICINITY LED TO THE FINAL BATTLE HERE JANUARY 29, 1863. THE CONFLICT OCCURRED IN DEEP SNOW AND BITTER COLD. SCORES OF WOUNDED AND FROZEN SOLDIERS WERE TAKEN FROM THE BATTLEFIELD TO THE LATTER DAY SAINT COMMUNITY OF FRANKLIN. HERE PIONEER WOMEN TRAINED, THROUGH TRIALS AND NECESSITY OF FRONTIER LIVING, ACCEPTED THE RESPONSIBILITY OF CARING FOR THE WOUNDED UNTIL THEY COULD BE REMOVED TO CAMP DOUGLAS, UTAH. TWO INDIAN WOMEN AND THREE CHILDREN FOUND ALIVE AFTER THE ENCOUNTER WERE GIVEN HOMES IN FRANKLIN.