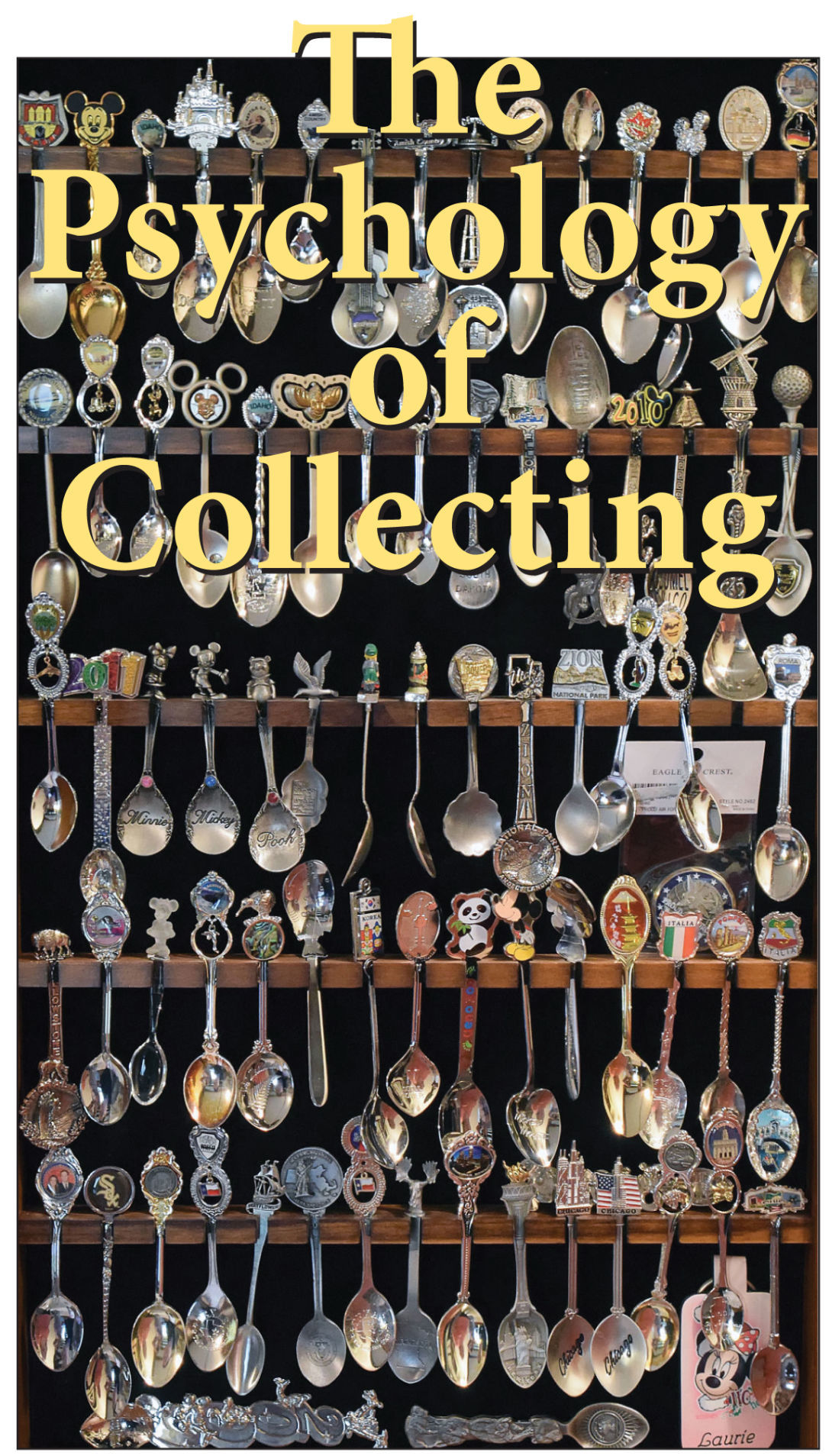 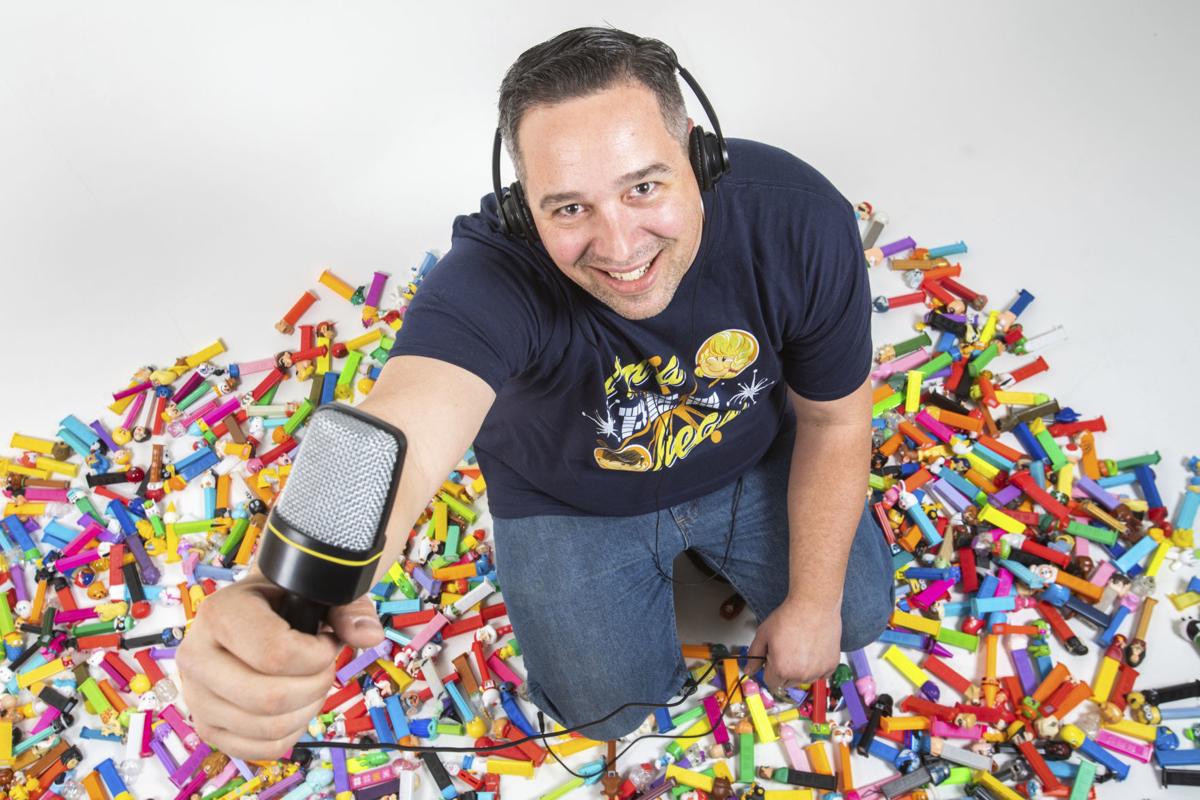 Utah resident Justin Hansen, of host The PEZ Collection Podcast, sits for a portrait with part of his collection.

Utah resident Justin Hansen, of host The PEZ Collection Podcast, sits for a portrait with part of his collection.

Comic books, PEZ dispensers, Beanie Babies and postage stamps are just a few of the more “typical” things people collect, at least according to eBay. However, collections come in all shapes and sizes from teapots to seashells, doorknobs to ceramic Christmas villages.

Logan resident Jeremy Taylor said he had a pencil collection when he was a child.

“Only, it was a specific type of pencil,” Taylor said.

When Taylor was in fifth grade, he started collecting the tiny “pencil nubs” left over from completely sharpened pencils.

“It became obsessive, and I had other students sharpening their pencils all the way to the nub just to give them to me,” Taylor said. “I think the teacher encouraged my collection because I was kind of a shy kid and it was funny to see me pull out my container full of tiny pencils. I think I had over 150.”

Taylor said that eventually his collection became too much of a disruption, and he disposed of it before moving onto “more adult things” in sixth grade.

“Sometimes I think about how happy that collection made me for those two months of school,” Taylor said. “It really is where my frenzy around collecting started.”

Many, like Taylor, find joy in the things that they collect. Across Logan, inside apartments, garages and homes, are collection of every size.

Decluttering may not ‘spark joy’

Marie Kondo, author of “The Life-Changing Magic of Tidying Up” and creator of the KonMari lifestyle brand, got a big boost in popularity this year when her Netflix series “Tidying Up with Marie Kondo” became a hit and an internet meme.

“Yes, I’ve heard of Marie Kondo,” Taylor said. “All of my stuff does give me some type of joy, though,” he said laughing.

Kondo popularized the idea that items around the house should “spark joy.” Otherwise, individuals should think about tossing them.

With Spring just around the corner, many might be looking at their collections and determining whether their treasures are clutter or keepsakes.

According to Utah State psychology doctoral student Clarissa Ong, letting go of one’s belongings may be easier said than done.

Ong’s thesis was titled “Effect of Acceptance Versus Psychoeducation on Hoarding,” and she currently works under Michael P. Twohig at USU.

“One of the biggest differences between hoarders and collectors is that the emotions are typically tied to one specific item or type of item,” Ong said. “For both, there is some type of association between the object and a memory, however, with hoarding, that association applies to everything.”

Ong said that shows like “Hoarders” create a stigma around individuals with a hoarding disorder, and she wants to dispel it.

“There are a lot of negative impressions because of TV shows,” Ong said. “Hoarding wasn’t considered a diagnosis for a long time. They added it in 2013, the same year I graduated.”

Ong said that a major difference between hoarders and collectors is that hoarders can’t stop doing it.

“Mike studies obsessive-compulsive disorders, which includes hoarding,” Ong said. “Current studies involving cognitive behavioral therapy has a success rate of about 50 percent. With these types of disorders, the rate is usually higher so there is a lot still to study.”

TV shows typically “solve” a hoarder’s problems in an hour of broadcast TV, making it seem like a more manageable issue.

“Individuals who hoard can approach the idea of experiencing guilt if it leads to better habits,” Ong said. “Their emotions are tied sometimes to the fear of making mistakes and not wanting to let go of things.”

Examples of this guilt include the idea that getting rid of an item is wasteful, that it was a gift and the gift-giver might get upset, that the item was expensive initially even if it has decreased in value, or other complicated emotions related to an object or objects.

“With collectors, the emotions are specific to the content being collected,” Ong said. “Collectors typically don’t experience distress, and their hobbies don’t affect their relationships or their abilities to do every day things.”

Ong said if a collection does affect one’s personal life, a diagnosis might be required.

“Collectors can still function,” Ong said. “Extreme collectors might qualify for a diagnosis, but typically that’s not the case.”

Ong said that extreme collectors are usually specific in how their collection looks, whereas hoarding eliminates the ability to use the stuff that is being hoarded.

“There’s an enjoyable feeling to both,” Ong said. “I think that’s why we do it.”

The business of collecting

“Dave is a big collector and has been doing this for 60 years,” Richard Ballam at Cache Valley Coins said. “He’s always at different shows, and this weekend he is at a coin show in Pittsburgh.”

Ballam works with Miller and sees multiple coin collectors each day. He looks at collecting from a business aspect rather than a personal aspect.

“Most collections are hard to sell because the value depreciates, but coin collections are fairly liquid,” Ballam said. “They have a monetary value, so they are easy to sell.”

Ballam said he sees patrons who decide to sell their collections for financial reasons or because they lost interest in collecting.

“Most people get into collecting because of the history,” Ballam said. “I used to collect as a kid, but I’m nothing like these big collections you see sometimes.”

Ballam said that some get into collecting for enjoyment and others for money, but Miller’s coin shop helps collectors no matter their background.

Kameron Evans is a paleontologist in Logan who collects a card game called Magic: The Gathering. Evans, who works for Green River Stone Company, said that it’s a misconception that many collectors can’t afford their collections.

“I spend a lot of money on my collection, but I still pay my bills,” Evans said. “It’s a great way to pass time and kind of a livelihood for me. I get pretty obsessive and have to sit down and sort my cards whenever I buy new ones.”

Evans walked into Heebeegeebeez in Logan, a comic book shop that sells the cards and other collectibles. There, Manager Chris Jepsen discussed why he thinks individuals get into collecting.

“With comic books, the entire idea is this compulsion to buy and complete a set,” Jepsen said. “It’s really story-driven and the market knows this.”

Jepsen said that comic book publishers’ goal is to get consumers to buy other titles.

“If you’re collecting one specific story and then it says at the end, ‘The story continues in Ghost Rider No 9,’ the publisher is hoping you will cross over into another story and start collecting that series too,” Jepsen said. “Much of the industry is preview driven too and that plays on the idea of FOMO.”

FOMO, or the fear of missing out, is a marketing ploy that drives buyers to purchase items with limited quantities.

“My collection is video games,” Jepsen said. “If someone looked at my collection, they wouldn’t consider me a hoarder because I am meticulous in how they are organized.”

Jepsen said he alphabetizes and color-codes his collection, but he purchases games for practical reasons rather than keeping them sealed.

“Maybe I’m compulsive, but I recognize when I have enough stuff and when I need to scale back.

From pencils to Pop Vinyl

Taylor is 22 now and said that his idea of collecting has changed “just a bit.”

Taylor lives in an apartment and travels for work. He said that his collection isn’t as “extreme as others” he has come in contact with, but it still gives him a “sense of satisfaction.”

The inside of Taylor’s home looks like a lot of homes do. The living room has a couch and a TV, the bed in the bedroom takes up most of the room and there’s a succulent in the kitchen.

However, if one looks closer, Taylor’s collection becomes more apparent.

Taylor now collects figurines from an American toy brand named Funko that was started in 1998 but began to rise in popularity in 2013 when they introduced the square-head “Pop” vinyl figurines. Now Taylor said he probably has about 100 of them.

“They are just a ton of fun to collect,” Taylor said. “I’ve seen hardcore collectors who have thousands of them, but I have to tell myself no sometimes.”

Taylor said he does a lot of research to ensure he doesn’t spend more than a figurine is worth.

“A lot of collectors are older, and they think these things are going to go up in value,” Taylor said. “Take Beanie Babies and PEZ, for example. They are toys, they aren’t retirement funds.”

Taylor said that many collectors keep their items in mint condition, but he isn’t concerned with that.

“I paid for them now and I want to enjoy them now,” Taylor said. “They line my shelves and make nice decorations, but that’s about it.”

Taylor said he has no regrets when it comes to spending what he calls “fun money.”

“I pay my bills, I eat well enough,” Taylor said. “Some people buy tattoos, others buy fine china. I like this.”

What characterizes a collector

A psychology review written by Ashley E. Nordsletten and David Mataix-Cols of the Institute of Psychiatry in London states that “work in collecting behavior has been characterized by discipline-diverse, theory-heavy, investigations spanning decades.”

Nordsletten and Mataix-Cols said that collecting is defined by an extensive list of features:

First, that the seeking, gathering and storing of objects have a subjective value for the collector and in most cases are an attempt at completion.

Second, that in a focused, systematic way the collection is limited to a definable area or topic.

Third, the collection has depth, including an interest in secondary literature and background information, and the individual has a passionate grasp on their collection.

And finally, the behavior continues over a long period of time and is not just a fad.

Nordsletten and Mataix-Cols cited a 2006 piece of literature titled “On the Psycodynamics of Collecting” from the International Journal of Psychoanalysis as how they compiled their list.

“I grew up loving superheroes and a lot of my time has been spent with these characters,” Taylor said about his collection. “I don’t think I’m ever going to stop liking what I like.”

In Ong’s studies, she and Twohig screen individuals looking for elevated hoarding scores. Those who believe they or someone else might be a hoarder can get help.

“Hoarders are struggling, too, in their own way,” Ong said. “We are always looking for participants for our studies and the anxiety clinic on campus offers free therapy for research testing.”

According to Psychology Today, Julie Swenson at Peak Mental Health is the only verified therapist who deals with hoarding in Logan.

Ong said that her research isn’t to make hoarders seem like they are different.

“People think hoarders think in a different way than we do and do it for crazy reasons,” Ong said. “But they hold onto things for very real and relatable reasons that many of us do.”

Collecting seems to be something that everyone does. Whether it’s a scrapbook full of concert tickets and theater stubs, coins or comic books, or even the nubby end of a sharpened pencil, collections are everywhere, which of course includes Cache Valley.