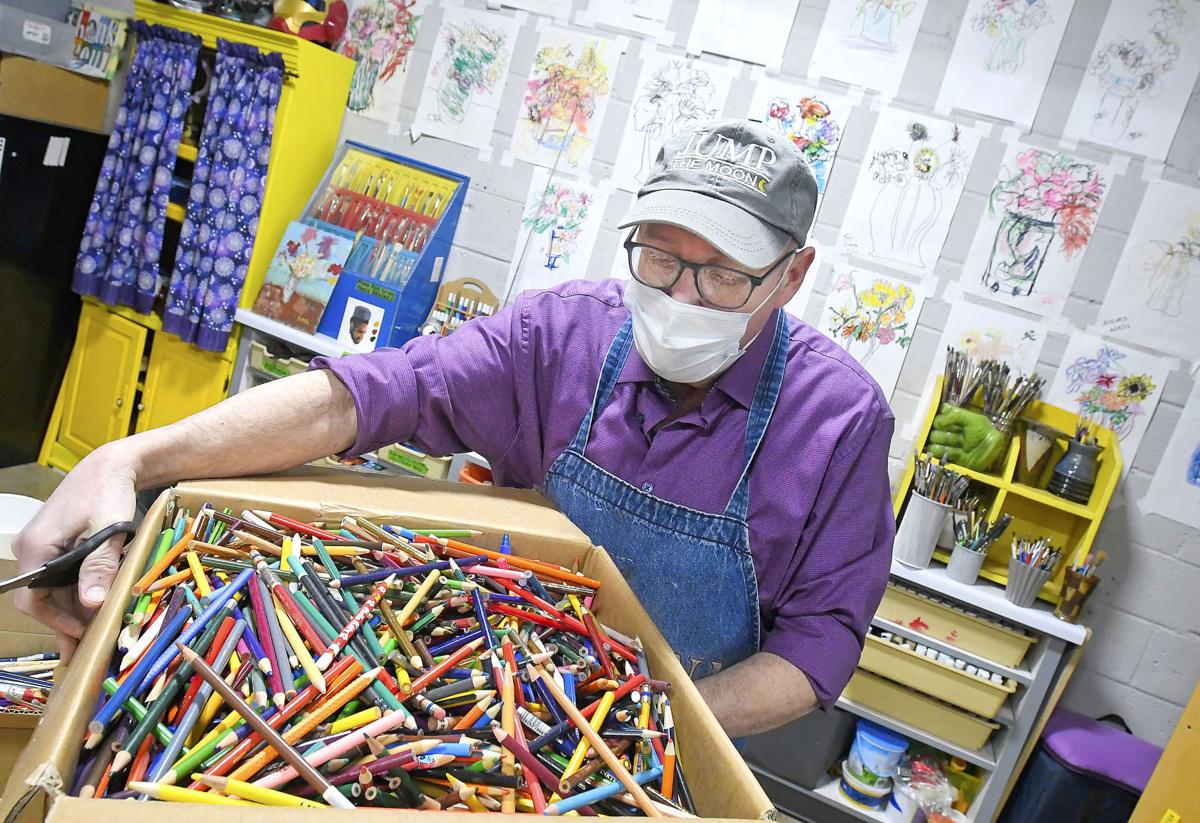 Michael Bingham packs up art supplies at Jump the Moon art studio on Friday in Logan. 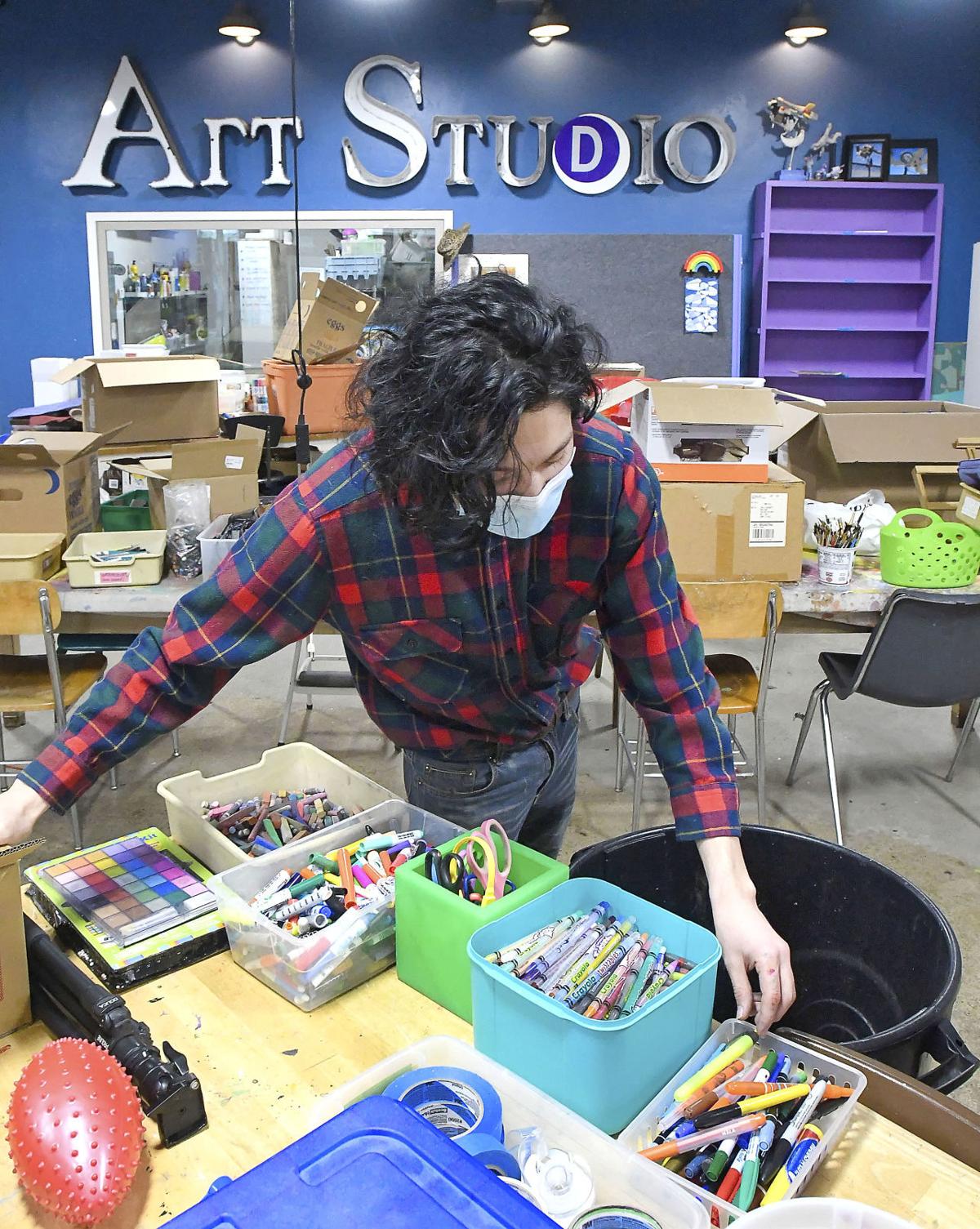 Kenzo Tillitt packs up art supplies at Jump the Moon art studio on Friday in Logan.

Michael Bingham packs up art supplies at Jump the Moon art studio on Friday in Logan.

Kenzo Tillitt packs up art supplies at Jump the Moon art studio on Friday in Logan.

Jump the Moon, the colorful Main Street art studio that specializes in assisting and inspiring people with disabilities, is in need of some assistance itself as it faces deadlines to vacate its current space and struggles to secure enough funding to resume the program elsewhere.

The short-term mission is to get moved out. But for studio director Michael Bingham, who suffered severe injuries in an accident two years ago, this will be difficult without some help, and he has issued an appeal to community members to pitch in however they can.

If you have ever been to Jump the Moon, you know it’s a menagerie of large art displays, art supplies and equipment custom-designed by Bingham to help disabled people create works of art. Among the displays is a giant Rubik’s Cube and 12-foot long, 800-pound astronaut replica hanging from the ceiling that Bingham created for a Salt Lake City art display some years ago.

“There are some big challenges right now. I need a transition space where I can store some really odd things, and I could really use some help from people with trucks and trailers,” he said, explaining he has to clear a storage space at the back of his building by Monday and be out of the building altogether by the end of the month.

Even more challenging than all of this is how Bingham can keep his four-year-old nonprofit program going. The Cache Valley Center for the Arts has agreed to let him conduct his unique classes in its small second-floor art classroom at 43 S. Main St., but this is a far cry from the art wonderland he established behind his storefront five blocks north, serving as many as 265 students a month at its peak.

Blame it on COVID.

When the coronavirus pandemic was declared last March, many of Bingham’s clients from assisted-living centers and special-needs programs could no longer make the trip to his studio. Then his landlord announced he was planning to sell the building. The property hasn’t been purchased yet, but Bingham can no longer afford it anyway.

He doesn’t fault the property owner, who actually extended him several months of free occupancy at the studio’s inception.

“We needed a chance to show what we could do, so I’ll always be really grateful to him for that,” Bingham said. “The landlord is a good guy and a friend, but that doesn’t mean he’s going to pay the rent for us.”

Bingham, who currently employs two part-time helpers, has a couple of leads on a possible new home for Jump the Moon, but nothing has materialized to date, and he’ll likely need a financial boost to pull it off.

“Boy, I really hope that we’re going to land on our feet. I’m at this spot right now where everything is very uncertain, but we have a long tradition of good things happening when we try to do good things for other people and the people we serve,” he said.

Valerie Harrington, the parent of a local teen recently enrolled in Bingham’s classes, is rooting for the program’s survival and called The Herald Journal on Thursday to urge the paper do an article on Jump the Moon’s current challenges. Harrington said her son has “paralyzing social anxiety,” largely as a result of physical challenges brought on by a stroke he suffered at a young age, followed by eight open-heart surgeries. When she learned about Bingham in a National Public Radio program, she thought she’d give Jump the Moon a try. She was amazed when the nontraditional art teacher was able to almost instantly flip a light switch on inside her son.

“He doesn’t really have any friends and is afraid to reach out to people, but in just the first day he was there at Jump the Moon, I couldn’t tear him out of the place because he was having so much fun with Michael and another gentleman, Nick, that he met there. They had so much in common with their interests and abilities and the things they wanted to do with art. He just came to life and really blossomed,” she said.

A former Hallmark greeting card artist turned art teacher, Bingham hatched the idea for the Jump the Moon studio and foundation while working at Mountain Crest and Ridgeline high schools and trying to motivate and accommodate special-needs students, especially those with severe physical limitations. To help them create art, he devised and constructed all manner of contraptions to apply color to paper, such as bathroom scrubber with markers attached to it and a toy truck with holes drilled for markers that could be used by rolling the truck across a surface.

“I discovered there were students with special needs that really didn’t get to go to any classes, or they would be wheeled in to the back of the classrooms where they could only watch. Those kids just got to me, and I just became determined I was going to find a way that they could make art too,” he said. “I didn’t know how, but I started working with some of those students, and they kind of took me on a journey and challenged me in different ways, and I started making crazy, strange artists’ tools to help them out.”

Cache Valley residents wanting to help with Jump the Moon’s move can contact Bingham at (435)750-5066. Donations can be made at jumpthemoon.org or through an endowment managed by Erin Ames at Adams Wealth Advisors in Logan.