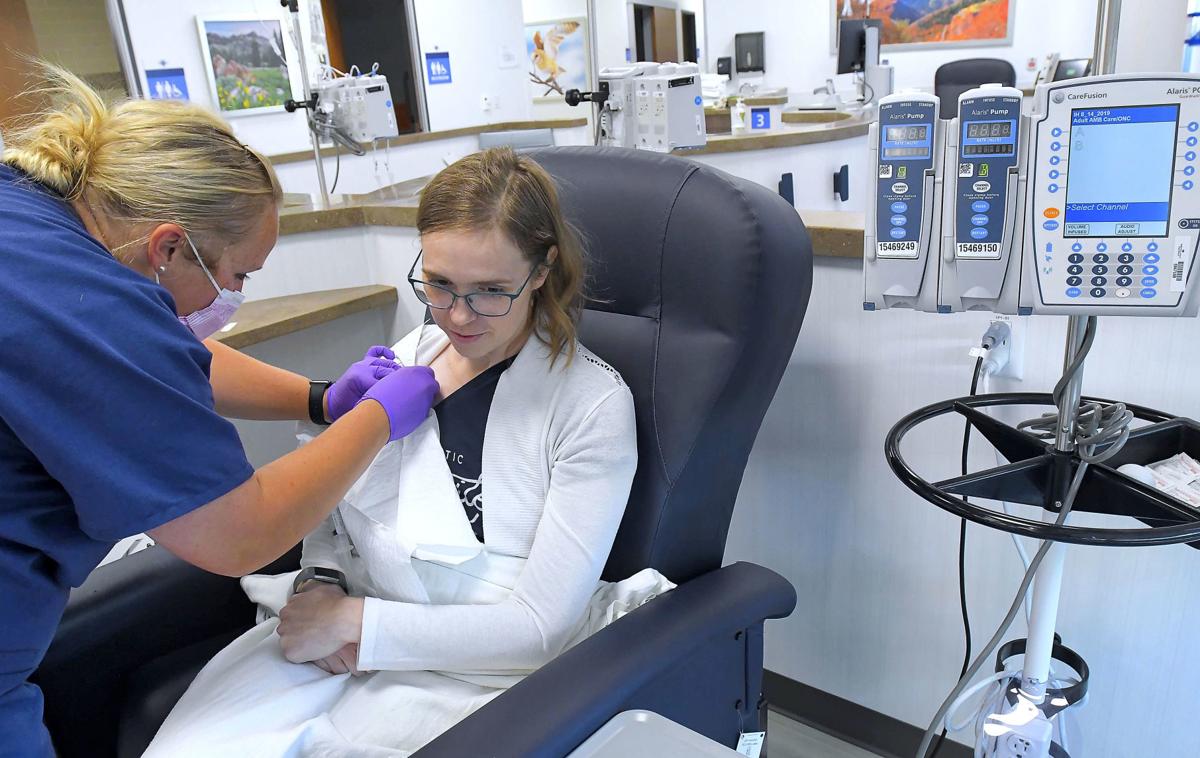 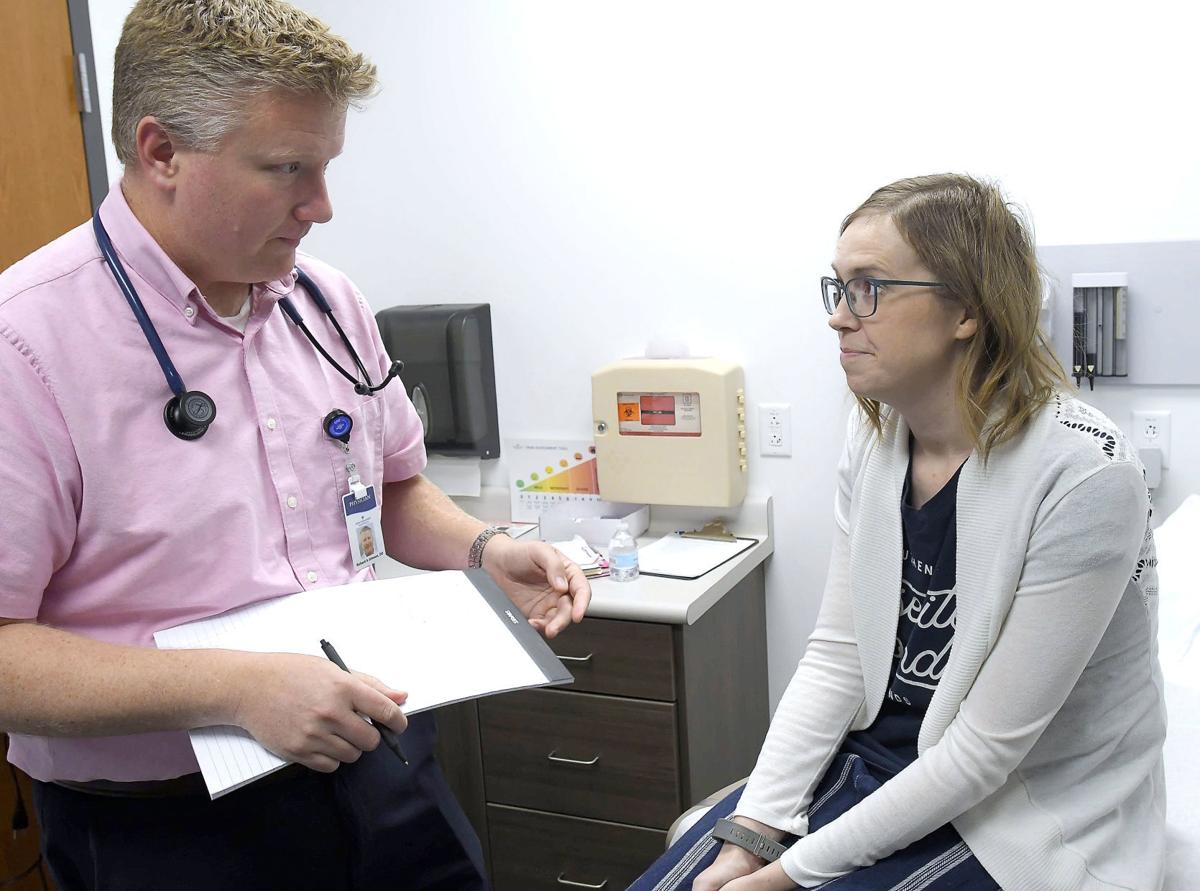 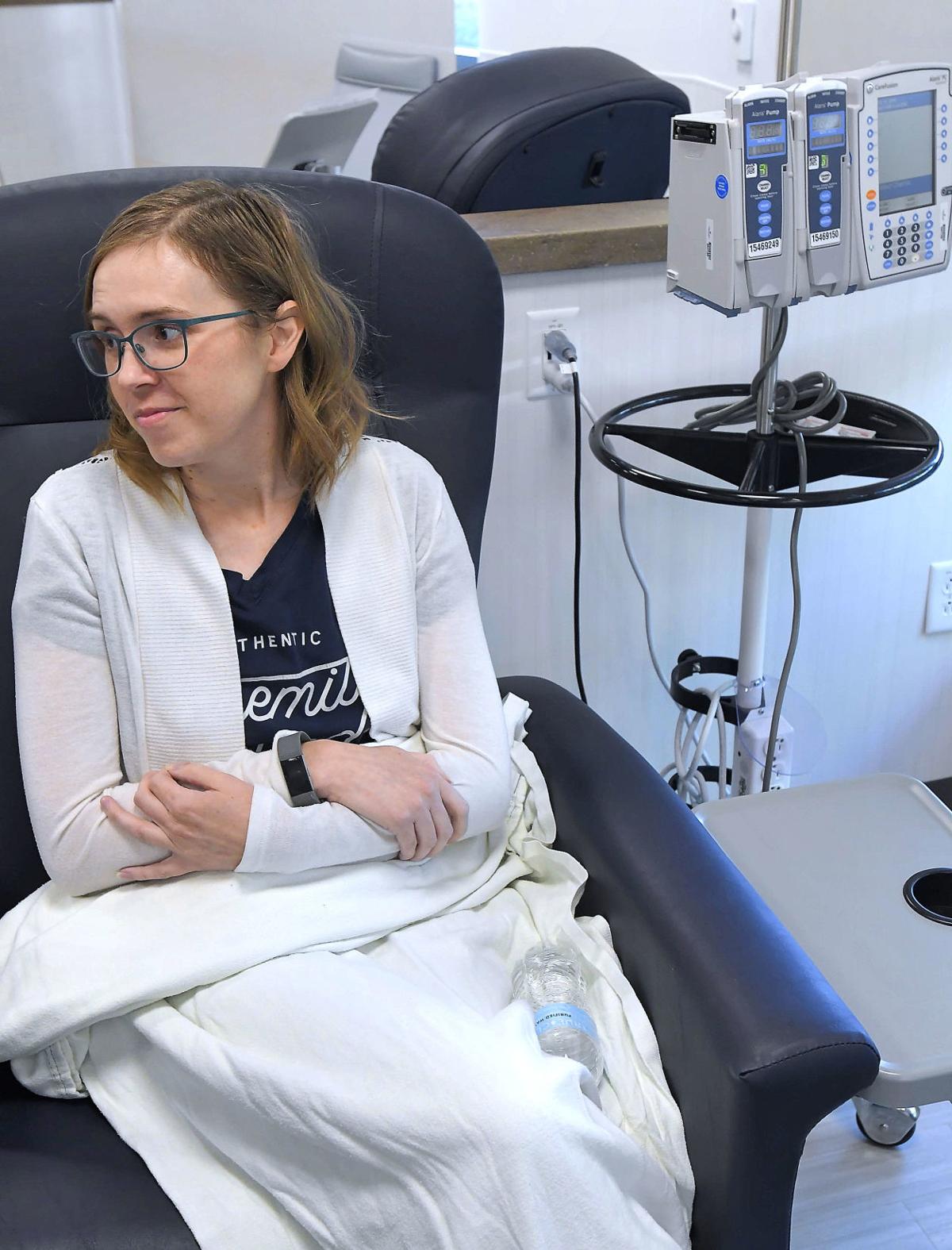 Andrea Krogh waits to have her blood drawn at the Gossner Cancer Center at Logan Regional Hospital last month.

Andrea Krogh waits to have her blood drawn at the Gossner Cancer Center at Logan Regional Hospital last month.

Andrea Krogh sat in a cushy blue chair at the Gossner Cancer Center early last week as a nurse inserted a syringe into her chemotherapy port.

The 38-year-old diagnosed with colon cancer earlier this year felt symptoms of a high fever the previous day, causing alarm to Krogh’s doctors and prompting her to come into the newly expanded center, on the grounds of Logan Regional Hospital, to draw some blood to see what was wrong with her.

“I just smile and nod and let them do what they need to do," Krogh said.

Krogh is just one of several patients currently taking advantage of the center, which recently expanded its physical space, its services and took on the Gossner name, thanks to the Cache Valley family’s $2 million donation. That money was record-setting for the hospital until a $5 million endowment made possible from the founder of Spillman Technologies, Richard Spillman, and his wife, Jane, came in to indefinitely fund a unique kind of treatment service for patients.

Krogh is highly appreciative of the Gossner Cancer Center and what it has to offer, having known what it was like to receive treatment here before the 2017-19 remodel.

“Being able to come here and have the space that you need for a little privacy and to just make the most of what you’re dealt has been nice,” Krogh said. “It’s great that everything you need is in the same building.”

In 2017, Logan Regional Hospital announced a 9,000-square-foot expansion of the cancer center — established in 2009 — thanks to the Gossner donation.

“It was the cancer center before, but our services were limited in what we were offering,” said Brandon McBride, the administrator of Logan Regional Hospital. “So in order to meet the needs of the community and make sure that we could keep patients close to home for health care, we really expanded our cancer service offerings to include everything."

Before the expansion, the hospital was conducting radiation oncology. That was done through a machine called a linear accelerator, which treats cancer via specifically targeted radiation. The machine was once state-of-the-art in 2009, but it is due for an upgrade.

The expanded services, thanks to the recent Spillman and Gossner donations, mean medical oncology — with additional doctors — is now being provided; infusion therapy (chemo) has moved over to the expanded cancer center space as opposed to being housed in the main hospital; and a pharmacy is on-site.

Paul Weight, a hospital administrator, said he shares with his colleagues a sense of excitement about what the cancer center can offer now, thanks to generous family donations.

"We're so motivated because of the beautiful and comprehensive services that are contained in one building," he said.

During The Herald Journal’s tour of the cancer center last week, a reporter and photographer got a chance to see where chemotherapy is provided — the infusion bay, a place with plenty of soft, big armchairs and windows that allow natural light.

Krogh said that normally, during such visits to the infusion bay, she is keeping herself busy reading a book, entertaining herself on the phone, or talking to the nurses or her husband, Mark.

“I sit in a chair a lot, so I might be in this exact chair,” Krogh said. “But I’ll be in this room, with my favorite girl; very good at taking care of me and joking with me and making my day a little easier.”

McBride said he’s not worried about rival cancer centers, like the Huntsman Cancer Institute, because of the level of care Intermountain Healthcare offers.

Moreover, he believes the hospital can put Gossner Cancer Center on the map in the Intermountain region.

“We want the Gossner Cancer Center to be the cancer center of choice, when needed, for patients and their families,” McBride said.

The additional services with the expanded cancer center meant hiring some new specialists, according to McBride.

“What that means is, from the time the patient is diagnosed with cancer, they have a team of nurses and social workers and dieticians that really guide their care throughout their entire cancer journey,” he said. “Specially, they have what’s called a ‘patient navigator’ who is an RN … They are phenomenal.”

These teams of nurses not only see the patient through their cancer treatment, he added, but after it, too, “into what we call ‘survivorship,’ to ensure that they transition back into normal life after cancer treatment is completed,” McBride said.

Although Richard Spillman declined a request for an interview with The Herald Journal, he and his wife, Jane, commented in an Intermountain Healthcare news release on what this type of patient navigator model would mean.

“We were touched by the opportunity to provide services that will ease the burden families feel during these stressful times, when their priority should be caring for their family member,” the couple stated. “We are pleased to share our family’s legacy in an area that means so much to us personally, and we hope this gift will enhance even further the wonderful cancer care available here.”

Another service the cancer center touts is Telehealth, according to McBride.

“We have experts all across the Intermountain Healthcare system that if we have a type of cancer that our medical oncologists here aren’t as familiar with, we can connect them with specialists at Intermountain Medical Center (in Murray) or Dixie Regional Medical Center (in St. George) … And they can receive all of their direction and care from a physician via videoconferencing,” McBride said.

The hospital administrator says more than 90% of cancer treatment inquiries can be addressed in Cache Valley, but in the event some cannot, Telehealth is helpful.

Krogh was diagnosed with colon cancer the week of Valentine’s Day this year.

“It was so overwhelming,” she said.

To get through the week, Krogh and Mark got their kids’ Valentine’s Day gifts ready early.

But the situation got intense pretty quick after that, Krogh said. She got a port inserted for rounds of chemo and a colostomy bag to reroute her digestion. Krogh had a round of surgery to remove the cancer from her bowel, followed by a procedure to remove 45% of her liver, which was found to have cancer in it.

“And there’s the loom of more chemo on the horizon as soon as I’m done recovering,” Krogh said.

Mark said he feels helpless with his wife’s cancer diagnosis.

“You do everything you can, but at some point, there’s just nothing else you can do but watch,” Mark said.

And watching someone have cancer is not easy, he added.

“I don’t want to say it would be easier to sit in the chair — because it wouldn’t be easier — but it’s not fun to be on the other side and not be able to do anything,” Mark said.

When Krogh visits the Gossner Cancer Center, she feels like she is in good hands.

“I can focus on whatever I need to focus on to get through that day,” she said. “I’m also glad that it’s here and I don’t have to travel as far. That makes such a difference in family life.”

Before the expanded cancer center opened, the family had to go down to the Salt Lake area for some of Krogh's treatment. Mark agreed with his wife that the Gossner Cancer Center has been beneficial to the family, residing in Richmond.

“It feels like there’s a lot less going on here and they can focus more on you,” he said. “It’s not a great experience, but it’s a good experience.”

Krogh, a mother of four children, wishes she never had cancer and did not have to make appointments here. But through it all, she remains optimistic.

“I’m looking forward to the day when I’m known as ‘Andrea’ again instead of ‘that lady with cancer,’” Krogh said. “No one says it to me … But it does get tiring having that be your identity.”