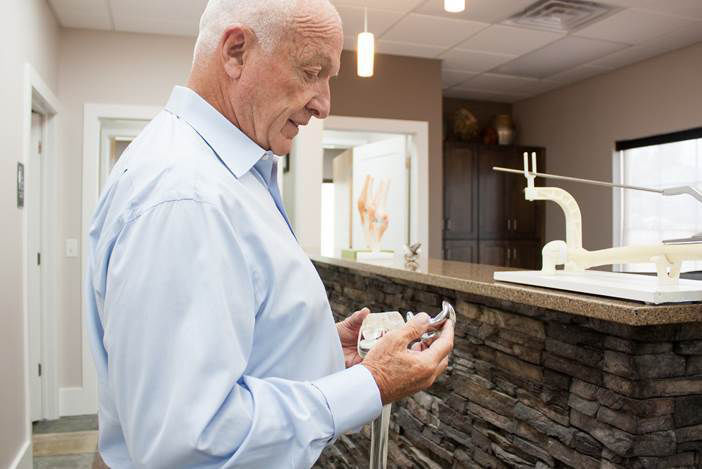 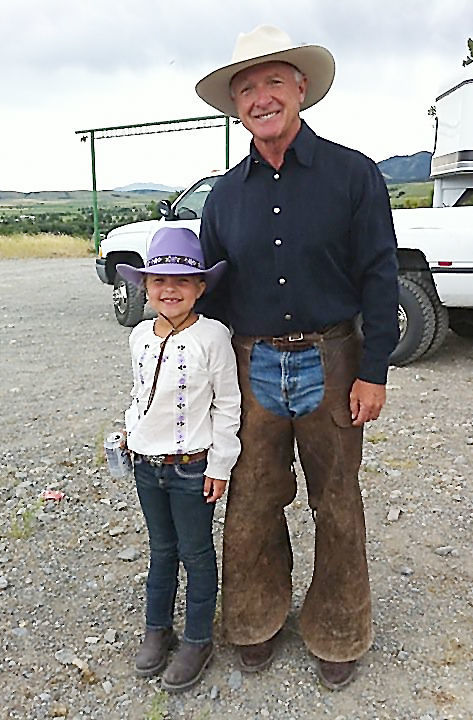 Having grown up as a small-town Idaho farm boy who never left the state until after graduating high school, Dr. Marlowe Goble of Logan is now known around the world for his discoveries, pioneering techniques and inventions in orthopedic medicine.

The Herald Journal caught up with Goble recently to update readers on one of Cache Valley’s most notable physicians.

At age 72, Goble intends to continue private practice for a few more years and keep pursuing medical research and patents. In fact, his latest medical invention, which took five years and more than a half million dollars to develop, is just hitting the market: “Single-use [disposable] Out-patient Total Knee Instrumentation.” Because bacteria mutate, they are becoming more and more resistant to sterilization by intense heat — or autoclaving. Goble said Europe has already moved towards disposable instruments, whereas the U.S. has lagged behind.

“The day will come when no instrument can be reused that has ever been used on another patient for fear of contamination,” Goble predicted.

With his latest invention, Goble now holds 120 patents. If that weren’t enough, the doctor also owns and runs the Medicine Lodge Ranch near Dubois, Idaho, where he raises bison. He was the first supplier of bison meat to Maddox Restaurant in Brigham City.

Goble’s life could define success to many. He was one of the two men who discovered the importance of the knee’s anterior cruciate ligament (ACL), performed the very first arthroscopic ACL surgery, and invented the Cannulated Interference Screw that is still being used in ACL surgeries today. He also admits to having amassed and lost a lot of wealth.

But interestingly, Goble didn’t allude to these achievements when asked what he thought defines success in live. Instead, he contends the greatest success one can feel is in “learning how to manage oneself with hard work.”

“Whether you’re rich or poor, the wealth has nothing to do with it,” Goble said. “It’s how you manage what you have so that someone else doesn’t control it. There’s probably more that you learn by managing yourself and being self-sufficient than you do in the classroom. … Through hard work I got to learn what I think is important for everyone to learn. I grew up having to work for everything that was important.”

Goble was raised in Blackfoot, Idaho. His father renovated homes while most of his mother’s extended family worked the homestead farms that had been established when his family helped settle the Rigby area. Goble’s summers were spent working on his uncle’s farms with his cousins.

“Homestead farmers back then were given 160 acres and raised grain, hay, potatoes, a few milk cows, a few feeder steers, and a couple pigs,” Goble explained. “That’s what they believed could support a family. … You had to be efficient and willing to work really hard because that was the only way you could put food on your table.”

Those summers working with his family on the farms are some of Goble’s most treasured memories. He told of waking up in the middle of night and riding horses out to move the irrigation canvas dams that would water the next section of field and then spend the rest of the day milking cows, weeding, or harvesting before the dams had to be changed again.

“As a kid growing up, I just loved that,” Dr. Goble said. “I’d get up before sunrise, and the saddest part of the day is when I had to go to bed.”

During summer breaks, while attending Blackfoot High School, Goble earned money by moving sprinkler pipes for farmers daily at 4 a.m. and 4 p.m., after the pressurized sprinklers began being implemented.

“It took a good mover about 25-30 minutes to move one pipe, and I’d move four, five,” he remembers. “So it would take three hours each time to move the pipe.”

Besides farm work and school, Goble learned to work hard at sports — especially football, for which he played linebacker and running back.

On the first day of summer practice his senior year, he was moving pipe and experienced a rare blowout because the pipe wasn’t properly locked into place. The pressurized water shot out of the pipe and damaged the surrounding plants and ground. Goble had to spend the next several hours repairing the damage and missed his practice. Even though captain of the team and considered one of the best players, the new coach, who was from the city and didn’t understand farm life, put him on the third-string team throughout the summer.

Characteristically, Goble did not quit and earned a football scholarship to the University of Idaho. He never played for U of I because he followed the coach who had recruited him to Oregon State, where he played for a year.

“Oregon State in 1965 was a big football power,” Goble said. “It was like USC is now in the Pack 12 or Ohio State now. Two years before, the quarterback, Terry Baker, had won the Heisman Trophy. There was a fullback that came from Medford, Oregon, that we called ‘Earthquake Enyart’ who could run a 40-meter sprint faster than I could, and the guy weighed 240 pounds. I was just undersized for that level of football. I was a pretty good football player in Idaho, but I wasn’t as good at Oregon State, so I didn’t get the scholarship I wanted.”

Goble chose to then serve a mission for the Church of Jesus Christ of Latter-day Saints in Southern California and Arizona. It was while serving his mission that Goble met a doctor that he “thought a lot of” who turned his interests towards medicine.

Goble returned from his mission and attended the University of Utah, where he found that he had a real affinity for organic chemistry. In his first year he received the highest grade on the organic chemistry final and was given a scholarship and admitted into the honors classes that were being taught by science legends Henry Eyring and W. W. Epstein.

To pay his way through school, Goble worked from midnight to 8 a.m. at the Clearfield Freeport Center, where he monitored the coal boilers that heated the buildings. He would study his chemistry books between monitoring or welding and fixing the system. His first chemistry class began at 8 a.m., so sometimes he would be 10 minutes late to class with soot all over his face and hands because he hadn’t had time to go home and clean up.

“My chemistry books are a treasure of mine now,” Goble said. “You open all my books and the pages are all full of soot. … Sometimes I’d showed up to class and would fall asleep. There was this kid that sat next to me that I didn’t like at all. I was half asleep once when he said to the teacher, ‘Goble’s asleep again.’ I heard Epstein reply, ‘Let him sleep.’ … I think Epstein respected me for working.”

Goble attended medical school at Washington University in St. Louis, where he received more experience as a student than interns received back in Utah. His clinicals were at a hospital that was desperate for help because it served mostly a very poor population. He remembers helping deliver babies for more than 700 women, most of whom had never seen a doctor during their pregnancy. He also remembers losing his first patient.

“I didn’t know enough,” Goble said. “If people didn’t have insurance, they tried to send them to City Center Hospital, which really was a ‘knife and gun club’ of a pretty rough area. The first person I ever sewed up died on the table and shouldn’t have. … He had about 12-13 stab wounds. I was a third-year student. I showed up for my rotation, and the chief resident pointed to him and told me to go take care of him. At that time, I hadn’t even learned how to sew yet. … that was tough.”

Goble returned to U of U for his fourth year clerkship, and when they found out that he knew more than the interns, they allowed him to skip his internship and hired him directly as a resident doctor. During his clerkships, he found that his strengths, personality, and skills leaned towards orthopedics.

“Neurosurgeons and orthopedists are the most aggressive personalities,” Goble said. “In any kind of medicine, you have to be aggressive, but in orthopedics you have to like to construct and build and use tools and doing things with your hands as much as your mind. It’s mechanical.”

It was while researching as a resident at U of U that he and Paul France made a discovery that would change the course of not only his life, but affect the lives of many athletes today.

“In 1976, the anterior and posterior cruciate ligaments were not appreciated,” Goble said. “In fact, there were some doctors that called them vestigial — meaning they used to be important in humans, but not anymore. They certainly were not being repaired. So I started studying them. All my other fellow residents didn’t know anything about them. They thought I was wasting my time.”

By performing a strain-gauge study with Paul France on the ACL, the pair discovered that without the ligament, “there was a tremendous instability in the knee.” Their findings were published in the Journal of Biomechanics.

Seeing a need for and the impact of doctors specializing in sports medicine, Goble approached the leaders of USU about starting a program at the university — which is what eventually brought Goble’s family to Logan.

“I built what’s now called the Campus Health Center,” Goble said. “That’s where the first weight room, physical therapy, trainers and the operating rooms were all in one building. It was the first of its kind. … It wasn’t thought earlier, especially in basketball, that weights were that necessary. … Previously, when athletes got injured, a local doctor took care of them. We became one of the greatest sports medicine programs in the nation. We had over 29 universities that came to visit to see how to develop theirs — including Note Dame and Stanford.”

Celebrating their 47th year of marriage, Goble and his wife, Michelle, have worked for success in their family life as well.

“She supported me on every stupid thing I did, like my research,” Goble said. “She had a lot of faith in me. … I’m not sure if you interviewed Michelle that she would think I’ve been the ultimate husband, but Michelle’s a super able and tolerant person, and she’s known me from the time she was 18. She knows how to handle me.”

Goble says that the greatest key to success in life has been persistence when faced with obstacles — something he is instilling in his own five children and 20 grandchildren as they come work “from first to last light” on his bison farm with him every summer.

“Somehow, if I stick to it when there’s a problem, I find a way through it,” Goble said. “ … Like we’ve been working on these new knee instruments. … After five years, I’m just now starting to peddle them to companies and it’s starting to work out. … Maybe the first thing you try you come you but up against a door, but that tells you your next move. If you keep at it, the door opens.”