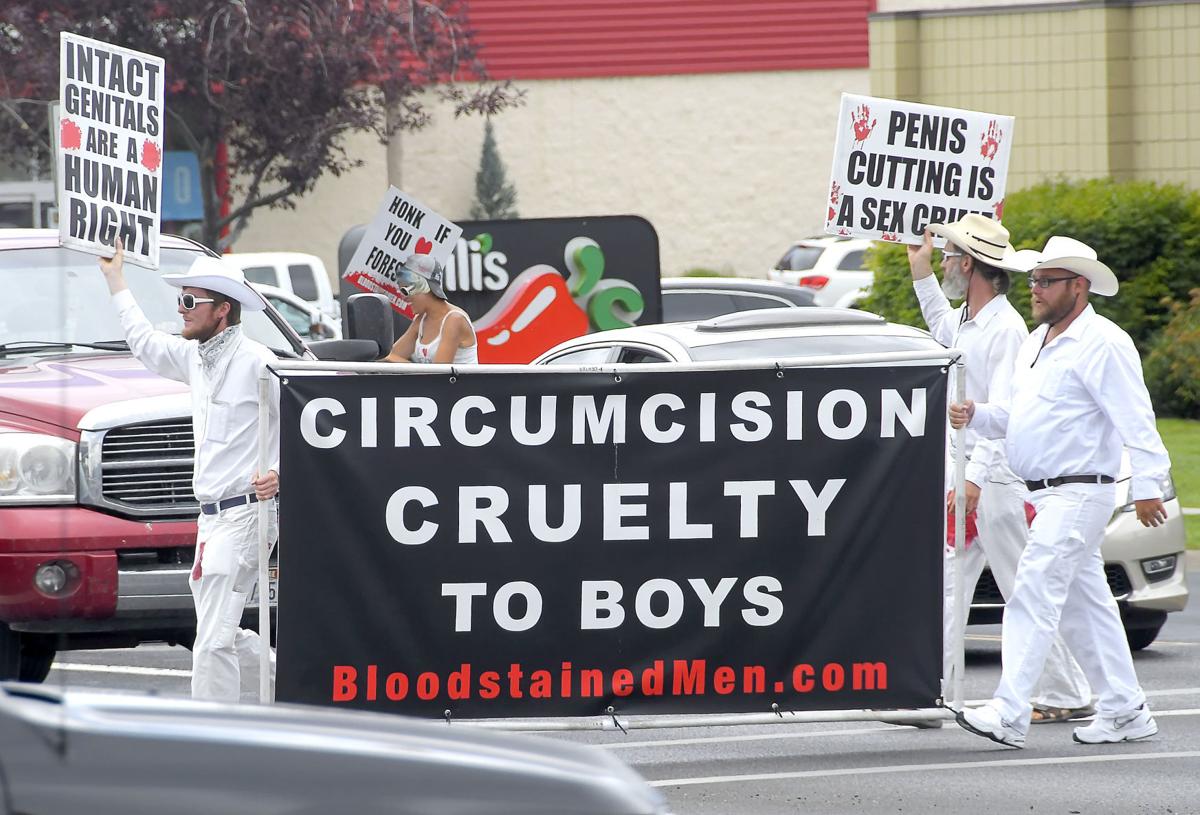 Protesters against circumcision march around the intersection of 1400 North and Main Street in Logan on Monday. Protesters had earlier stopped in Pocatello and Idaho Falls. 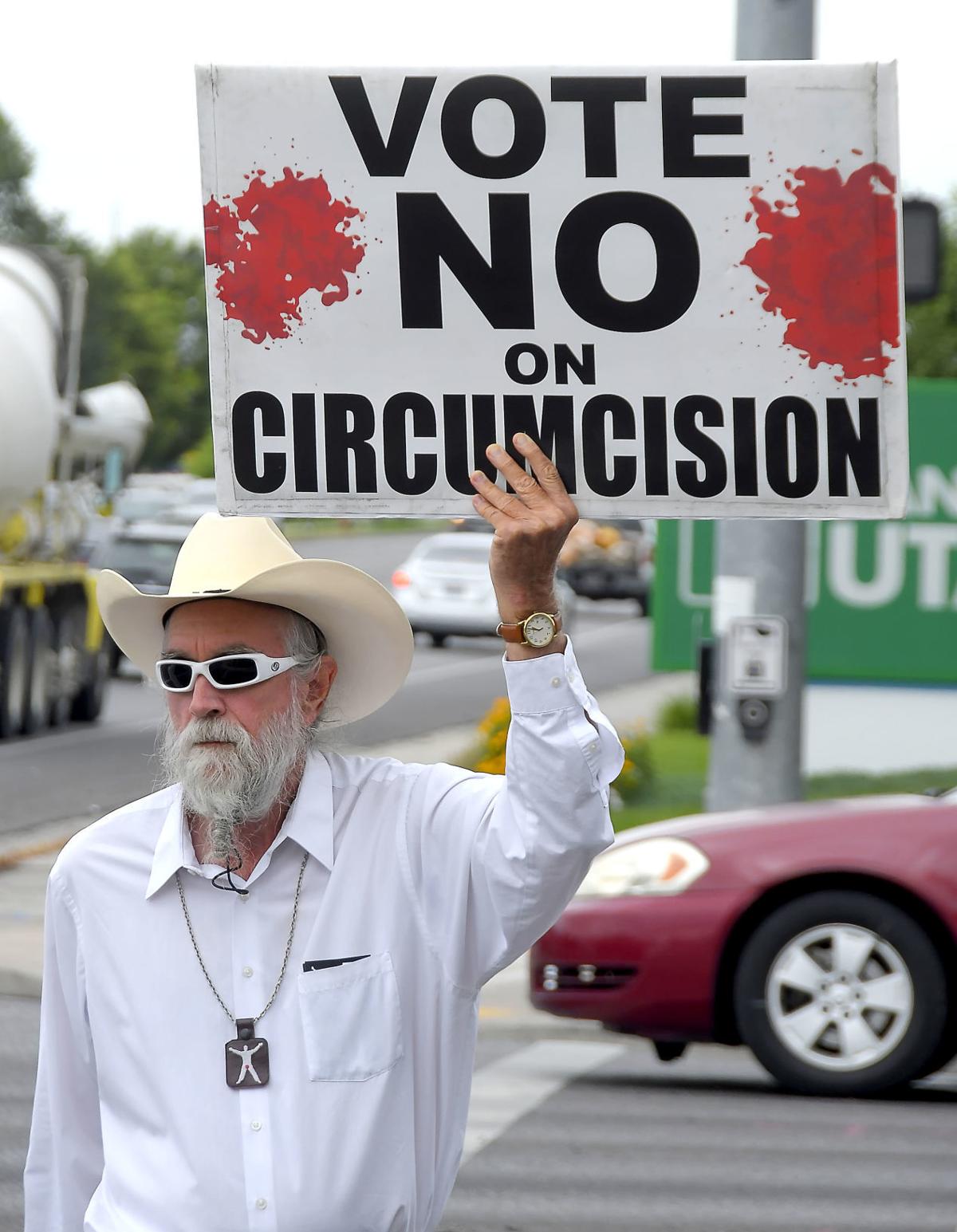 Brother K protests circumcision, while standing on corner of 1400 North and Main Street in Logan on Monday.

Protesters against circumcision march around the intersection of 1400 North and Main Street in Logan on Monday. Protesters had earlier stopped in Pocatello and Idaho Falls.

Brother K protests circumcision, while standing on corner of 1400 North and Main Street in Logan on Monday.

Protesters from Bloodstained Men and Their Friends took to the corner of 1400 North and Main Street in Logan for several hours on Monday as part of their Rocky Mountain Circumcision Crisis Protest Tour. It was the 18th stop of a 20-date tour through the Rocky Mountain west.

Clad in all-white clothing — save one red stain on each of their genital areas — the protesters spread their message: male genital mutilation, or infant circumcision as it is commonly known, should be ended.

“It’s unnecessary surgery done to a nonconsenting minor, which is not ethical to do,” said the organization’s spokesman, Harry Guiremand. “It’s a forced amputation, which is a very serious human rights violation.”

Guiremand said while circumcision is deeply rooted in American society, Australia, New Zealand, Canada and most of Europe — with some religious exceptions — have nearly stopped the practice all together. While health care officials, including the Centers for Disease Control and Prevention, maintain circumcision reduces the risk of certain sexually transmitted and viral infections among heterosexual males — along with many other maladies associated with uncircumcised males — Guiremand said these benefits of circumcision have long since been debunked.

“It’s sold to Americans under the false pretense that it’s good for them,” Guiremand said. “All of this research that claims benefits has been refuted in medical literature.”

According to Guiremand, money is behind the push to circumcise children.

“The retail value of the skin patches that can be grown from a single foreskin is worth about $900,000,” Guiremand said. “There’s a huge amount of money involved in this.”

Guiremand also said, similar to female genital mutilation, the foreskin has the most sexual sensitivity of the penis leaving a permanent impact on the sex life of those who are circumcised.

Anastasia Rogers, an intactivist with Bloodstained Men, said women are protected by law from genital mutilation, but men and intersex children are not. Rogers, who is intersex and considers themself a victim of genital mutilation, said American society’s gender norms view females as more delicate and in need of protection as opposed to their male counterparts. Therefore, it is assumed male children can better tolerate circumcision and don’t need protection.

“They’re still babies,” Rogers said. “There’s no reason to be forcing this gender bias on our children.”

For most of their tour — with the exception of some obscene gestures, hollering from car windows and the occasional cephalopodic inking from coal-roller pickups — protestors said the general reaction is positive.

“The positive reactions far outweigh the negative ones,” said Michael Vier, an intactivist traveling with the group.

Vier said he has felt strongly about this issue since he was young, but started becoming vocal about in the past six months. He said anyone who looks at the research of circumcision will see the damaging, disfiguring effects. Because of that, these protests give him sense of pride.

“I go away from it thinking I did the right thing and I did something that I can be proud of,” Vier said. “And if somebody else thinks I’m a weirdo, that’s their choice.”

Rogers said the topic of circumcision and genital mutilation is important to spread throughout the world, and has lead them to participate in an estimated 100 protests with Bloodstained Men.

“Your babies are born perfectly fine and there’s no reason to be giving them cosmetic surgery,” Rogers said. “I feel like intact genitals are a basic human right.”