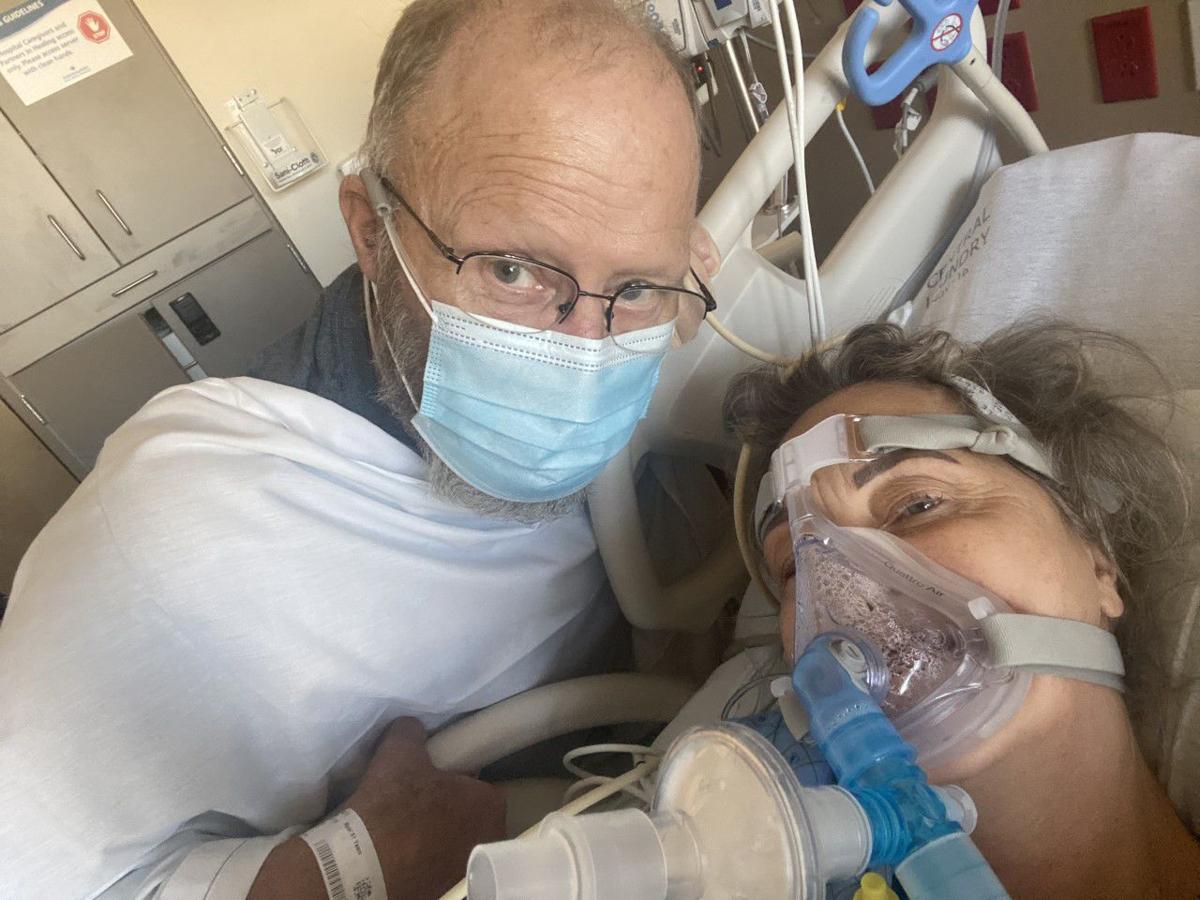 Chad and Tracy Larsen on Oct. 1, 2020 — the day Chad was released from the hospital after fighting both shingles and COVID-19. Tracy suffered irreparable lung damage due to the virus and died on Oct. 29. 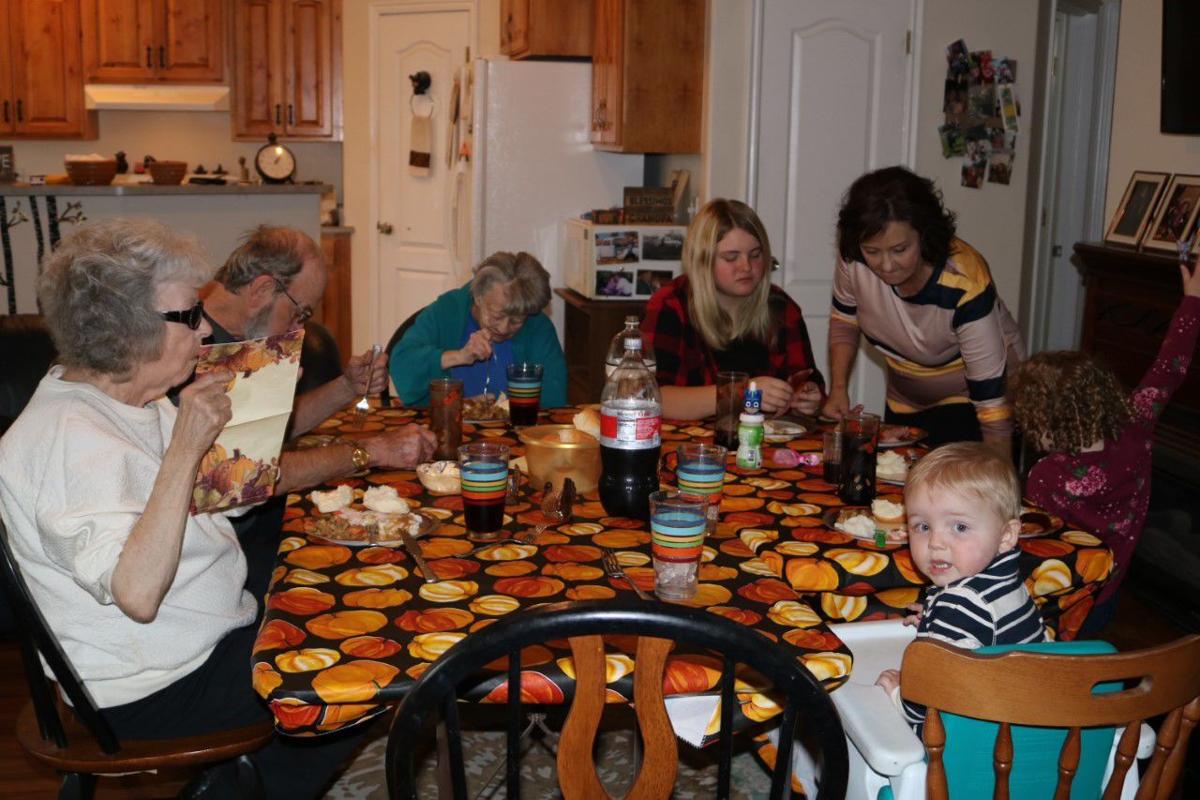 From left to right: Elva Porter, Bert Porter, Betty Jansson, Keerah Cook, Tracy Larsen, Braylin and Dreyson Wootton, gathered for what would be the family’s last Thanksgiving together in 2019. Larsen, Bert Porter and Jansson all passed away within the last year (Larsen and Porter due to COVID-19), and Elva Porter has severe dementia and is now in a memory care center. 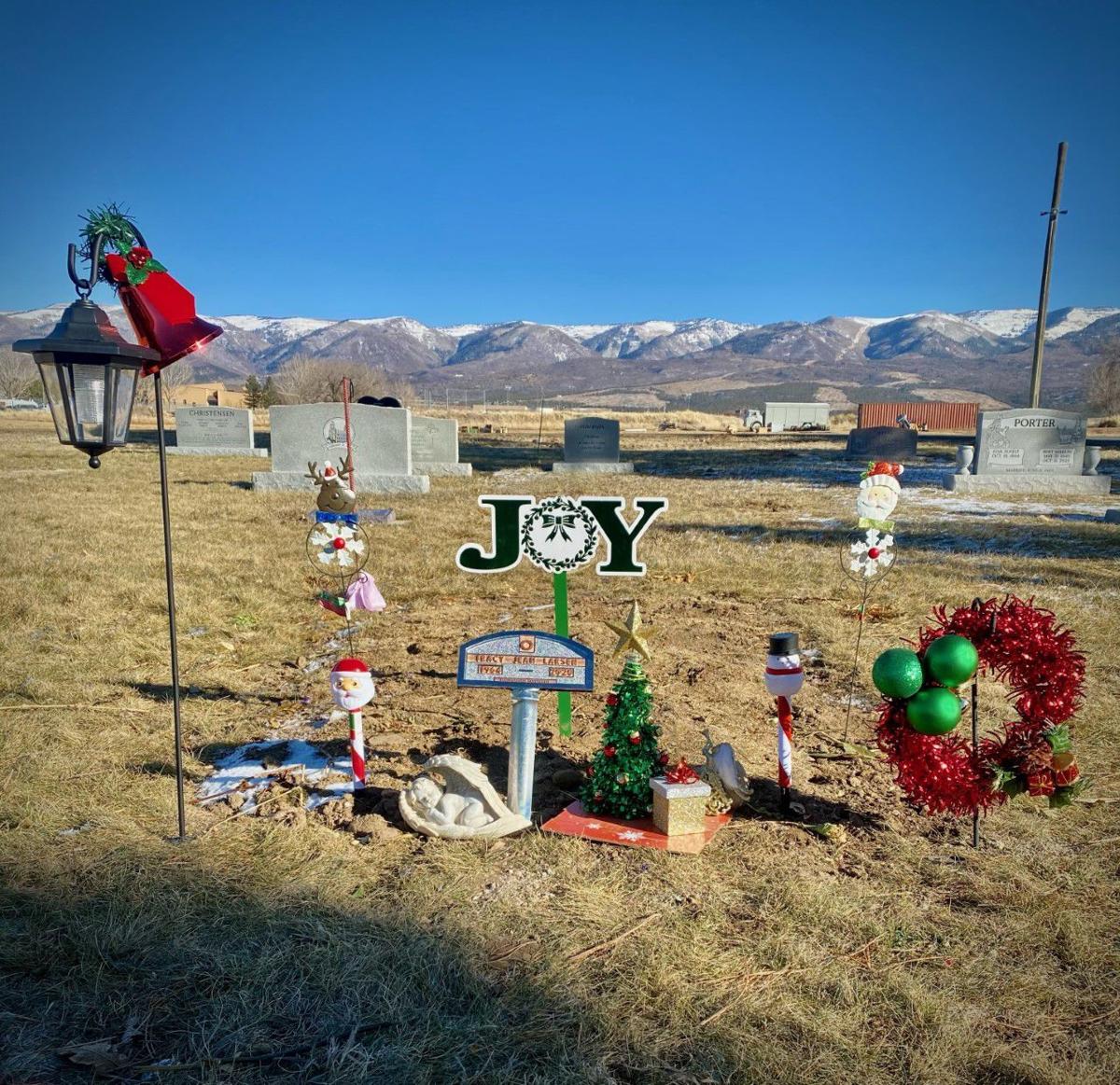 After Lindsay Wootten and her sister, Candice Holman, decorated their father’s house for Christmas on Nov. 27, the family bundled up and decorated their mother’s gravesite at the Mt. Pleasant Cemetery. This is the first holiday season for the family since Larsen died on Oct. 29 due to complications from the novel coronavirus.

Chad and Tracy Larsen on Oct. 1, 2020 — the day Chad was released from the hospital after fighting both shingles and COVID-19. Tracy suffered irreparable lung damage due to the virus and died on Oct. 29.

From left to right: Elva Porter, Bert Porter, Betty Jansson, Keerah Cook, Tracy Larsen, Braylin and Dreyson Wootton, gathered for what would be the family’s last Thanksgiving together in 2019. Larsen, Bert Porter and Jansson all passed away within the last year (Larsen and Porter due to COVID-19), and Elva Porter has severe dementia and is now in a memory care center.

After Lindsay Wootten and her sister, Candice Holman, decorated their father’s house for Christmas on Nov. 27, the family bundled up and decorated their mother’s gravesite at the Mt. Pleasant Cemetery. This is the first holiday season for the family since Larsen died on Oct. 29 due to complications from the novel coronavirus.

Thanksgiving at her family home in Moroni, Utah, used to be a cheerful affair, the air ringing with her mom’s infectious laughter and everyone excited about her grandfather’s famous homemade stuffing.

Like the traditional stuffing Wootten and her sister, Candice, tried to recreate, the holiday gathering lacked the flavor of years past. But the family is sharing their story in the hope it can save others from the same experience.

“We just can’t wrap our minds around it,” the 34-year-old said. “It’s still so surreal. We spent yesterday pulling up different pictures or videos of my mom just to hear her voice or just to see her smile. In fact, my sister and I got my mom’s closet yesterday, and we each picked a shirt of my mom’s to wear to Thanksgiving dinner, just so she could be there with us.”

‘I didn’t want to believe’

Wootten said at first, she didn’t take the virus seriously and believed it was being exaggerated and politicized. She would tease her mom for wearing a mask when they went to the stores early on in the pandemic.

“She would always say, ‘Well, Lindsay, I don’t ever want to get something and take it home to my dad,’ which was my grandpa, ‘because if he ever caught something, it would probably kill him,’” Wooten said.

She thought her mother was silly, but she would grudgingly wear a mask when asked to do so.

“I’ve been proven wrong from when I thought the virus wasn’t very serious,” Wootten said. “I thought, just like a lot of people, ‘It’s the cold or it’s the flu.’ But it’s not. It’s much more than that. And I’ve witnessed it firsthand.”

“It’s not the flu,” Anderson said at the council’s Oct. 20 meeting. “It’s nothing like the flu. That’s from personal experience. … It’s hit our family very, very harsh. It affected every single person of our family, despite all of our negative tests. You know, it really impacts the people around the person that tests positive as much, if not more than, that person.”

Wooten “didn’t want to believe” how deadly COVID-19 could prove, but she is now haunted by her mother’s death “on replay, over and over” and is adamant about following the guidelines and health experts’ advice.

“I want to prevent that as much as possible,” she said. “I don’t ever want a family to go through what we’ve been through. I don’t want somebody to feel what my mom, my dad and my grandpa felt in the hospital. I don’t want families to suffer.”

Despite their best efforts, Wootten’s parents tested positive within days of each other after Tracy developed a scratchy throat on Aug. 22.

Wootten’s father, Chad — the softball coach for Snow College — had no underlying conditions other than the shingles virus attacking his inner ear canal that lead to his initial hospitalization on Aug. 17. Upon admittance, he had received a negative coronavirus test.

One week later, the Larsens had been diagnosed with COVID-19 and Chad was transferred from the Infectious Disease Unit where his Ramsay Hunt syndrome was being treated to the Intensive Care Unit.

By Sept. 1, Wootten’s grandfather was hospitalized and sent to the ICU at Utah Valley Hospital, and Tracy spent two weeks at Nephi Hospital. She was able to go home for five days before heading back to the ER when she struggled to breathe.

“All of my family members have really devastating effects from COVID,” Wootten said. “My dad had pulmonary embolisms, or blood clots in his lungs. They also think that there is a chance that my dad suffered a mild heart attack because of COVID. And my grandpa also had the COVID pneumonia, or what they say looks like shattered glass or ground-up glass in his lungs, and that’s what my mom had as well.”

Tracy was ultimately transferred to the same ICU as her father. Neither would leave.

“I was the one to tell her that she was dying,” Wootten said, “and that was the hardest thing that I’ve ever had to say to somebody and to hold her hand if she took her last breath.”

The family had hoped and prayed for another miracle, as Chad had also been put on a ventilator while in the ICU and the doctors and nurses warned that most did not recover.

Despite testing negative for COVID-19 multiple times, the disease had ravaged Larsen’s lungs beyond repair. She was moved from the COVID-19 quarantine in the hospital to the trauma center, which allowed family members to say their goodbyes in person rather than virtually.

And Chad, though 61 years old, used to be able to keep up with the girls he coached. Now he is part of the ever-growing number of “COVID long-haulers” still battling the effects of the virus while mourning his spouse of 34 years and his father-in-law.

Instead of enjoying the holidays, the Larsen family decorated the house out of a sense of duty — both to the young grandkids and in memory of Larsen — and then went to Larsen’s gravesite at the Mt. Pleasant Cemetery armed with a wreath, a small tree, and other festive decorations while they wished they could “skip Christmas this year, because it’s going to be anything but normal or exciting.”

“It would be something that my mom would be doing,” Wootten said. “She would be decorating, and not just a little bit. She would go all out. So we did that in her memory. We got it together, and it’s definitely not up to what my mom would do, but we did our very best. … We have to try to do anything to keep her memory and her spirit alive in us.”

Wootten has found a new calling in sharing the family’s journey to warn others of the deadly consequences of ignoring the pandemic.

“My hope for other families is that they do listen to the health experts, that they do social distance, that they can stay home when they can, and then everyone starts to wear face masks, keeps washing their hands,” she said. “Because they don’t want others to experience a holiday season without their loved ones before it’s their loved ones’ time.”

Health care workers, who are feeling the strain as Utah is seeing a growing number of COVID-19 patients, are issuing a similar plea.

Mary Burbank, the Intermountain Healthcare nurse who manages the Behavioral Unit at Logan Regional Hospital, said virtual meetings are the only safe way to avoid potential virus exposure and spread while enjoying the socializing that usually comes with the holidays.

“Just because you’re not exactly sitting at the same table doesn’t mean you can’t be together as a family,” she said. “A lot of my girlfriends and I will do breakfasts, like Saturday or Sunday mornings, and it’s all virtual, so we all cook whatever we want, we get on FaceTime, and we have a little conference call. And I really think until that this slows down, that’s the way that it’s got to be.”

Wootten added: “To me personally, I would rather have a smaller holiday and maybe use FaceTime or Zoom to have a larger holiday with families at their own home, safe, than to have a great big holiday and risk it being the last with a family member.”