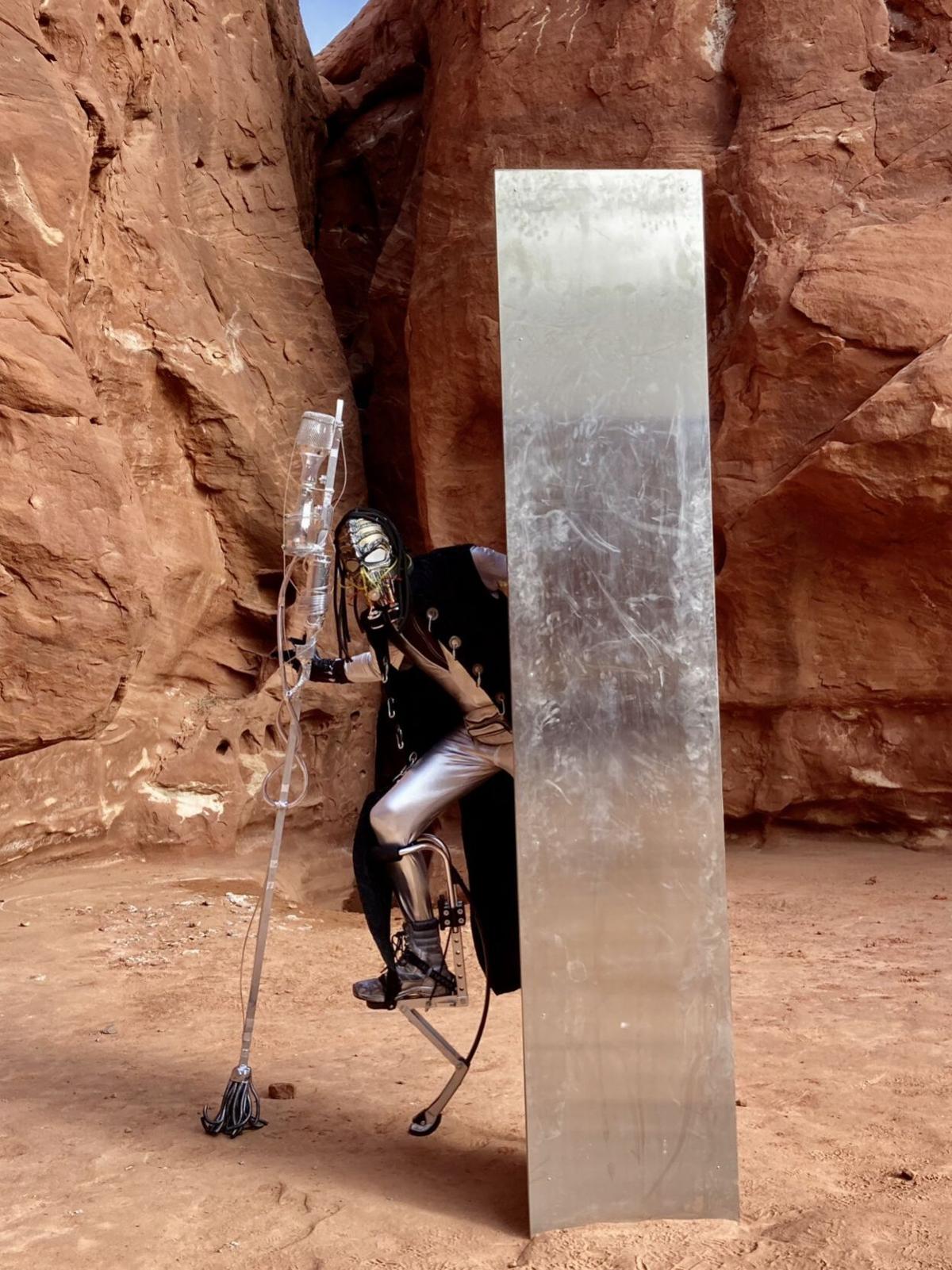 Colter Hoyt poses in full alien costume with his plasma rifle and jumping stilts at the site of the “Utah Monolith” days before it disappearance. 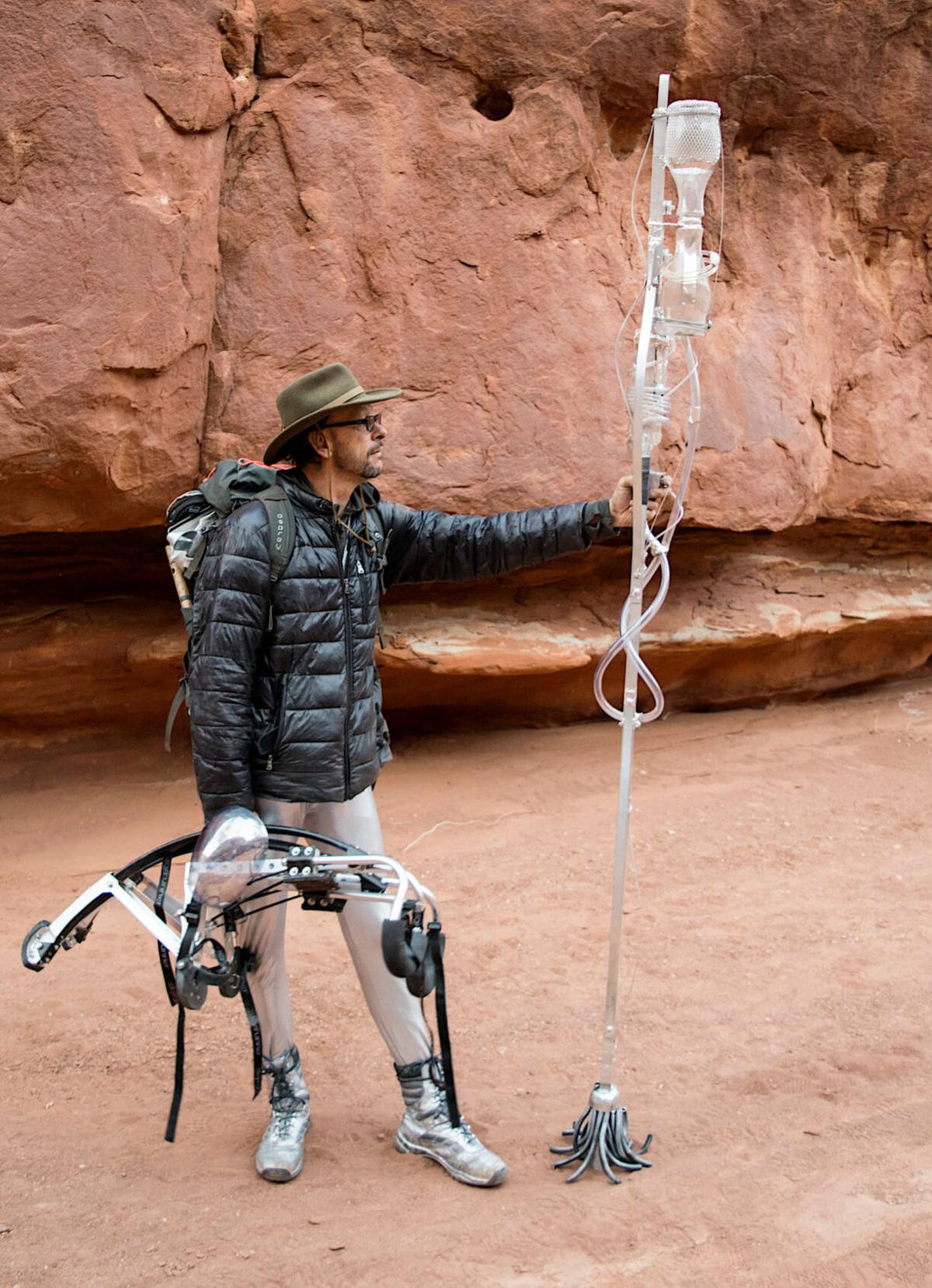 Colter Hoyt poses with his plasma rifle and jumping stilts at the site of the “Utah Monolith.” 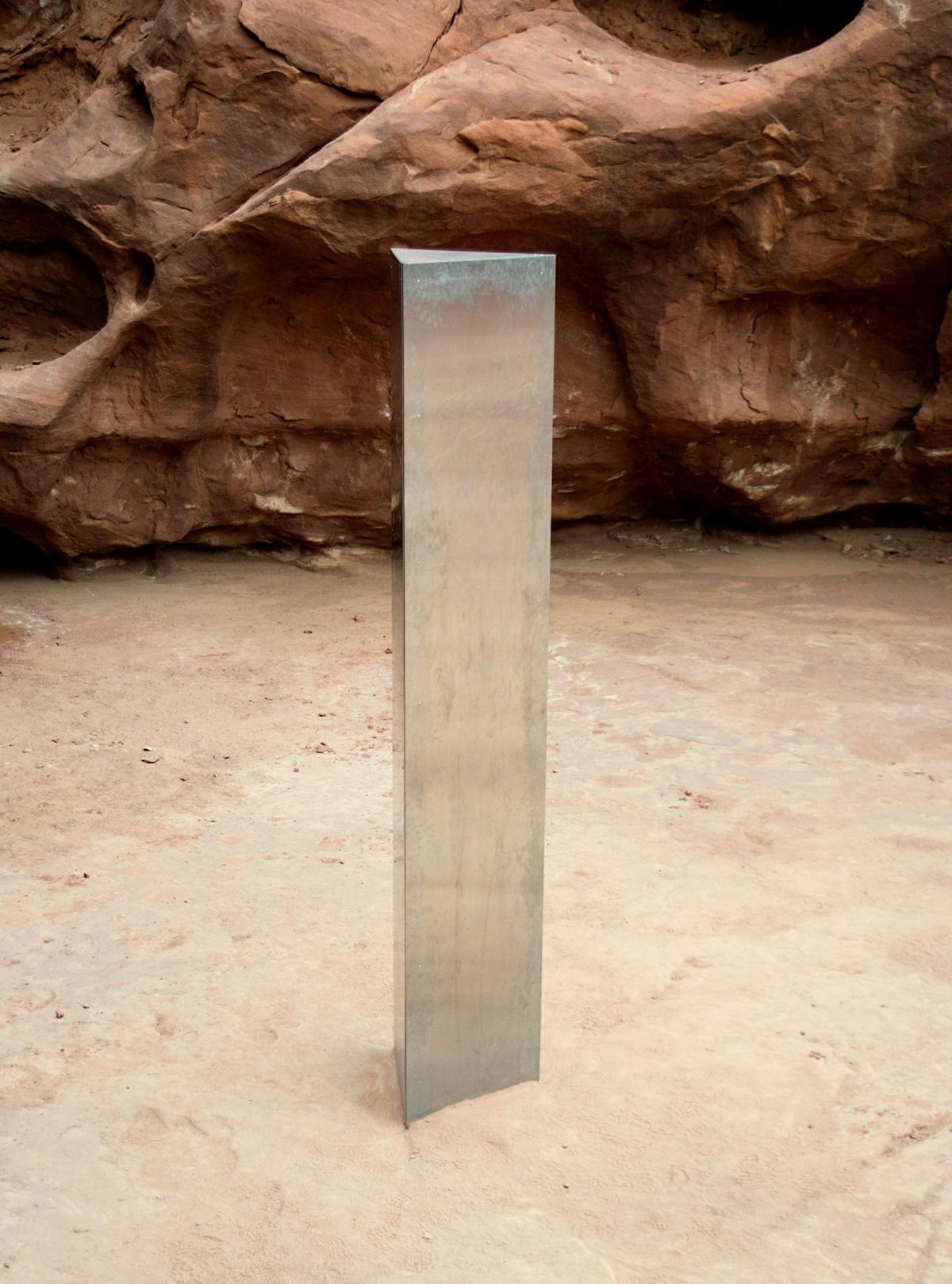 The mysterious desert object known as the “Utah monolith” is seen just days before its removal. 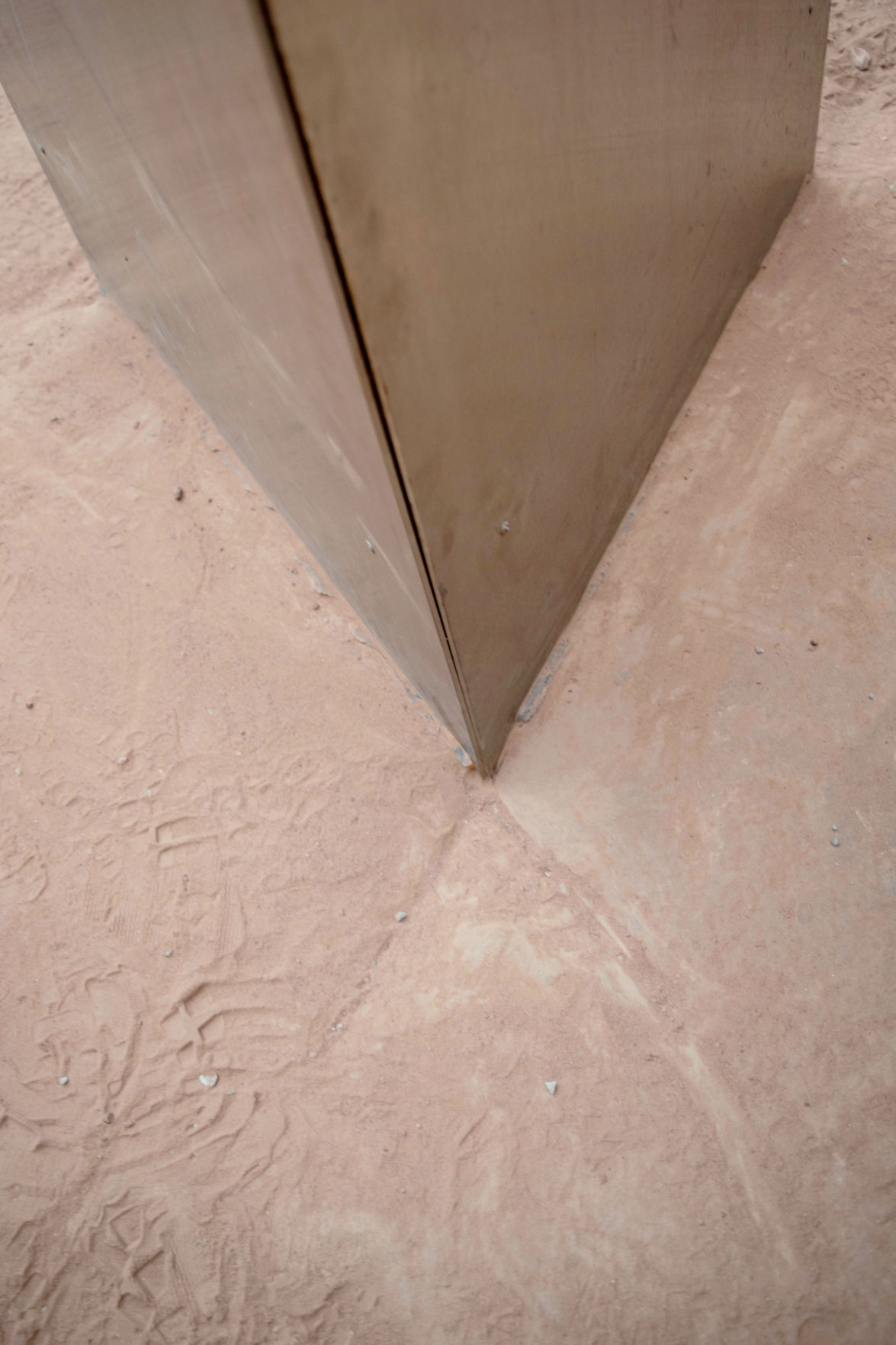 Metal rivets and cut marks in the rock are seen in the “Utah monolith” metal object installation days before its removal.

Editor’s note: Herald Journal reporter Jackson Wilde was intrigued by last week’s discovery of a mysterious metal object installed at a remote site in Utah’s red-rock desert — so intrigued he decided to spend his Thanksgiving tracking the mystery down. Following is his account of that adventure:

Days after the Utah Department of Public Safety Aero Bureau announced its discovery of the “Utah monolith” on Nov. 18, news reports went viral worldwide. A crew from the bureau was initially flying over red rock country in search of bighorn sheep when they found the lustrous enigma, and photos depicted crew members in a sci-fi-esque landscape investigating the object.

“The exact location of the installation is not being disclosed since it is in a very remote area and if individuals were to attempt to visit the area, there is a significant possibility they may become stranded and require rescue,” DPS said in its initial statement. “We are encouraging anyone who knows the location of the monolith to not attempt to visit it due to road conditions.”

The internet, however, had different ideas. GPS coordinates of the object’s location were easily accessible days later. (One Reddit user said it took him a mere 45 minutes to track down the object’s whereabouts.) Videos and photos of people finding the object began sprouting online, proving the veracity of the object’s location while also showing it was not otherworldly. People were standing on it, trying to pry it open to see inside and the photos revealed the fasteners holding it together.

It was clear loads of eager idiots were ignoring DPS warnings of being stranded in the desert — myself included.

My pilgrimage to find the mysterious desert object began at 7 a.m. Thanksgiving morning. Instead of an overindulgence of carbohydrates and tryptophan, I joined well over 20 vehiclefuls of people making the journey to see the illegal object before its anticipated removal by the Utah Bureau of Land Management.

The drive was relatively uneventful until the last 15-mile stretch in San Juan County where the asphalt gave way to a violent road that rattled the brain and nearly punctured an oil pan. (To be fair, a vehicle with a few more inches of clearance would have made easy work of the trail.) After an hour of jutting rocks, sand traps and bottoming out half a dozen times, my bumper is damaged and a returning monolith seeker suggested I get out and walk.

“You should park here,” he said, explaining without prompt that the mysterious object is just over a small hill maybe 50 yards to the north. “Maybe be quick though — it’s getting dark.”

On the other side of the hill a small canyon serpentines hither and fro to a red rock cul-de-sac where the object could be seen. In the light of the setting sun, the looming 10 feet of smooth metal appeared an ominous black, and suddenly the intrigue that was nearly ruined quickly returned.

A brief inspection of the object revealed rivets holding it together, cut marks in the rock from what appeared to be a concrete saw, and oily, dusted smudges from every person who had ever touched it.

I also realize I am not alone.

A few feet to the right of the object stands a lone, bespectacled man in tight silver pants holding a matching eight foot staff and spring-loaded jumping stilts.

“It’s called a plasma rifle,” says Colter Hoyt — a backcountry guide and “jack-of-all-trades” based in Boulder City, Utah, and Boulder, Colorado. “It uses gas and electricity to make a loud explosion. If it’s done right, you can shoot things really far and really fast. But, as it’s designed this way, all it does is make a loud pop.”

Hoyt demonstrates the “bomb-proof” plasma rifle, and it’s an appropriate accessory for his alien costume. It has a portable propane bottle affixed with HVAC foil tape and a small blue burst of flame ignites when triggered. Hoyt says others — with and without costume — showed up earlier in the day for photo opportunities with the object. For Hoyt, the desert object coalesces his affinities for art, costumes, red-rock canyons and a general mission of having fun.

“It just calls me,” Hoyt said. “I love artwork and, in a sense, it’s graffiti too. It’s walking on treacherous territory here.”

Hoyt said while he predicted the eventual removal of the “super cool” piece to protect the canyons, it was worth the trip to see it.

“The BLM will have to take it down — it’s their obligation,” Hoyt said. “I wanted to come out and get a picture and see it before they did it.”

It was dusk when Hoyt handed me a missing piece of my bumper and we parted ways. As night enveloped the area, I got the sense I made a potential misstep. I couldn’t identify any landmarks I observed on my entry and the already plodding drive seemed to be taking longer than it should. I spotted a roaring campfire and decided to crash the party to ask how to get out of this godforsaken desert and, of course, ask about the monolith.

One camper was understandably confused by my presence and my initial explanation seemed to cut zero ice. Other campers had seen T.V. news stories of the mysterious monolith and report heightened levels of traffic in the area, though they themselves had not seen the object.

The helpful campers told me to stay on the road and I’d be out in no time, but to come back if for some reason I couldn’t find it.

“You can’t miss it,” one camper said.

Within a matter of several minutes I was grateful for pavement and thinking about what would happen to the object in the days to come.

Turns out Hoyt was half-right. The object was promptly removed as expected, but apparently not by the hands of the government. A BLM spokesperson told the Salt Lake Tribune on Sunday the object appears to have been removed by an “unknown party,” who reportedly left only the triangular top of the object and the hole it sat in.

As quickly as the puzzling object arrived into the public eye, it disappeared — becoming another peculiar, ignorable factoid as strange as the year we’re living in. But Hoyt says there may very well be other similar sculptures in the area — on private property, of course — leaving the door open for further mystery.

“Although we can’t comment on active investigations, we would like to remind public land visitors that using, occupying, or developing the public lands or their resources without a required authorization is illegal, no matter what planet you are from,” the Utah Bureau of Land Management stated in a tweet.