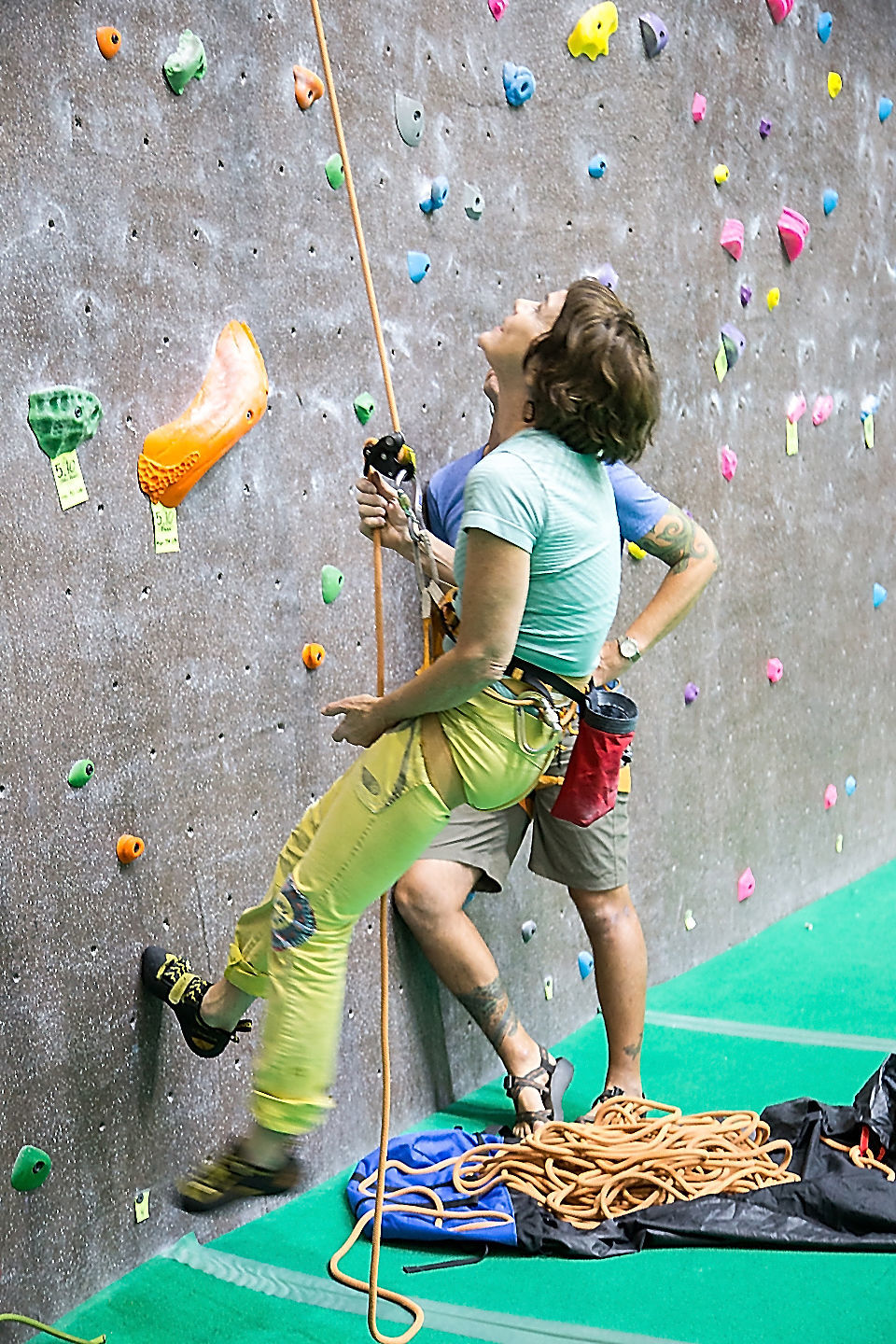 Rock climber Cathy Flanagan of Anchorage, Alaska, is lowered from a route during the “Warrior’s Way” falling clinic at Elevation Rock Gym in Logan on Sunday. 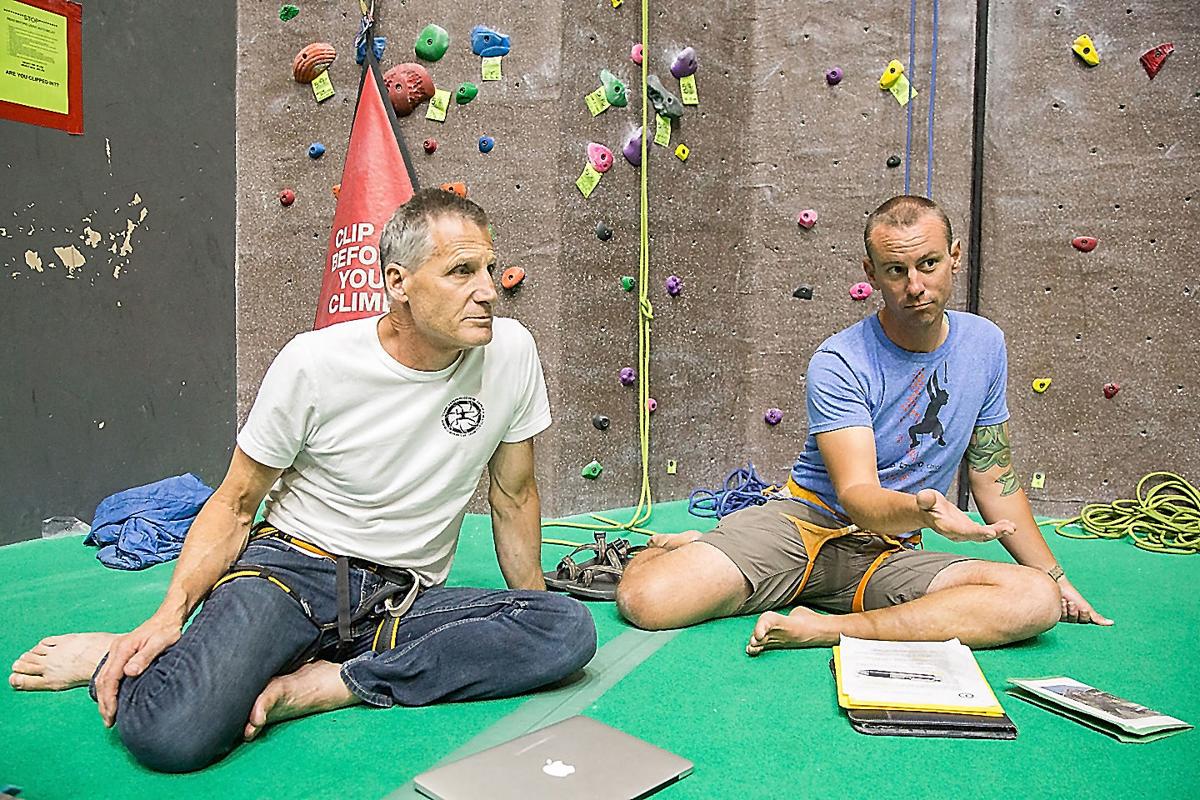 Rock climber Cathy Flanagan of Anchorage, Alaska, is lowered from a route during the “Warrior’s Way” falling clinic at Elevation Rock Gym in Logan on Sunday.

Plummeting several feet down a rock face usually isn't high on anyone's to-do list, but a visit from a rock-climbing author had a half-dozen climbers focused on falling.

Arno Ilgner, author of "The Rock Warrior's Way," and Adam Mitchell, one of his trainers, hosted a clinic Sunday afternoon at Elevation Rock Gym in Logan, where they walked participants through the basics of living more in the moment while climbing — including the moments when your grip fails and you're waiting for your rope to catch you.

"When we have something like a fear of falling, then part of our attention is being distracted toward that fear, and we have less attention for climbing," Ilgner said.

Climbers are too often motivated by wanting to accomplish a certain task or to get a difficult section over with so they can go back to a more comfortable situation, Ilgner said. Focusing on some point in the future pulls their attention away from the present, he said, ultimately diminishing their performance as well as their enjoyment.

At the clinic, participants started out with shorter falls before progressing to falling a few yards at a time. Ilgner said climbers can sometimes encourage their partners to take much longer falls than they're comfortable with, but that's the wrong method. Instead, Ilgner said, climbers practicing falls need to understand how much resistance and fear they're feeling.

"So then the climber, him or herself, makes that decision based on what they feel is appropriate," Ilgner said.

Veteran climber Cathy Flanagan of Anchorage, Alaska, attended the the clinic in Logan because she missed recent clinics in Salt Lake City while she and her husband were in Utah for the American Mountain Guides Association conference and to ascend some routes around the state.

Flanagan said she didn't feel too much fear rock climbing until about six years ago when she broke her back in a fall. She was surprised at how much fear that accident brought into her sport. She said she knows what went wrong and can explain it rationally — but fear often isn't rational, and you can't always explain it.

Flanagan's been facing that fear through fall training and reading books like "The Rock Warrior's Way."

"Fear makes it really hard to climb, or tension," Flanagan said. "So falling just alleviates the anxiety, if you take a controlled fall. It just is like, 'Oh, OK, I'm going to be fine.' It's just like — what do they always say? — you've got to get back on the bike, or whatever."

Logan resident Megen Kepas said other climbers had recommended "The Rock Warrior's Way" to her, so she was excited to take Ilgner's course. She said she's had a bad habit of downclimbing when a challenging route makes her anxious.

"I'm more comfortable with something below me that I've done before than something unknown above me," Kepas said. "So this has been really good for accepting the unknown and continuing and making my way all the way up the wall."

Most climbers don't practice falling, Ilgner said — and they rarely intend to peel off a route — but Ilgner's method teaches that you can't avoid the consequences of your choices. Falling is a consequence of choosing to climb, and it will probably happen sooner or later despite your best efforts. A rock could break, your foot could slip or your muscles could finally tire.

"Falling is the unsafe part of the climbing process, but you can't avoid that, ultimately," Ilgner said. "So rather than just avoid it, face it in a responsible, incremental way to gain experience so you learn how to respond to it. So it increases safety, paradoxically."

Being mindful while climbing extends to planned ascents as well as unplanned falls, Ilgner said. When they've reached solid footholds or handholds, climbers will pause for a moment to look around, reach for their chalk bag and give their muscles a break.

"Climbing is made of stopping to rest and think, and when you're finished with that, to let go of thinking and move and engage the body," Ilgner said.

During the second half of the clinic, Ilgner and Mitchell gave participants tips on exactly what they need to do during the short rests of a sport climb, then what to focus on when they shift to moving their bodies upward.

"It's channeling their attention in a more intentional way," Ilgner said. "And that helps them be more powerful and more effective in their thinking process and their climbing process."

For more information on Ilgner, his books or his training courses, visit warriorsway.com.

While there's always a certain level of danger involved in sport climbing, specialized gear and techniques help limit that risk.

The most common method of stopping a fall is setting up a belay. The climber ties a rope to their harness, and a partner runs the rope through a belay device, or brake, attached to their own harness that allows them to stop the rope in the event of a fall.

Often the belayer is situated below the climber, so anchors are needed. In a top rope belay, the rope passes through a double anchor at the top of the route. As the climber ascends, the belayer takes up any slack so that if the climber falls, it's only a very short distance, if at all.

In lead climbing, instead of a top rope anchor, the climber uses a series of anchors at multiple points along the route. Many routes have permanent bolt hangers drilled into the rock that climbers attach their rope to via a quick draw, or two carabiners separated by a short length of webbing. That way, a climber will only fall a limited distance before the rope catches them. If the climber is 10 feet above the bolt, for example, they'll fall for about 20 feet before the rope starts to catch them. Dynamic ropes, which stretch a bit under tension, are used to absorb the shock of the fall.