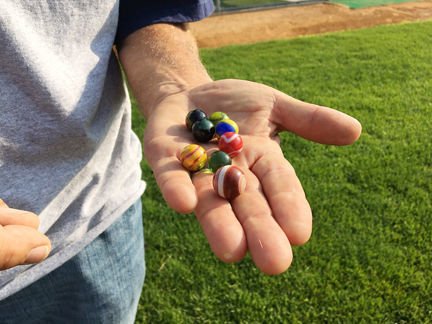 Denny Christensen, an alumnus of Logan High School’s class of 1968, shows off some of the marbles he and his classmates played with on Saturday. 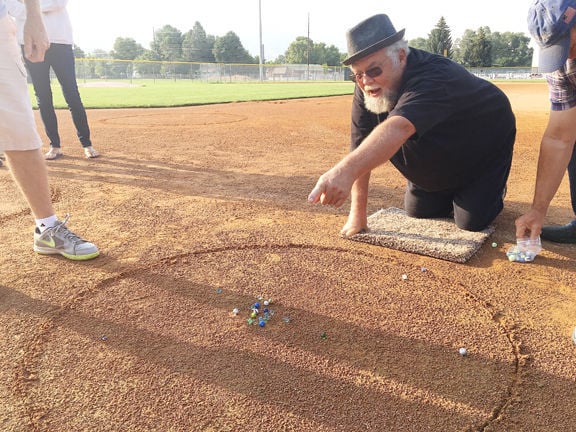 Craig Smith, an alumnus of Logan High School’s class of 1968, speaks to his classmates before shooting marbles on Saturday. Members of the class gathered to play at the LHS baseball field in honor of their 50th high school reunion.

Denny Christensen, an alumnus of Logan High School’s class of 1968, shows off some of the marbles he and his classmates played with on Saturday.

Craig Smith, an alumnus of Logan High School’s class of 1968, speaks to his classmates before shooting marbles on Saturday. Members of the class gathered to play at the LHS baseball field in honor of their 50th high school reunion.

In their youth, the students of Logan High School’s graduating class of 1968 were obsessed not with Barbie dolls or Matchbox cars, but something much simpler: marbles.

The colorful glass objects were popular in the 1950s and ‘60s to play with in a competitive setting, and that was certainly true for the ‘68 LHS students, who played tournaments when they were in elementary school.

Craig Smith, an alumnus of the LHS ‘68 class, was the valley’s marble tournament champion in 1960, when he was a 10-year-old at Ellis Elementary.

“I was just a kid, and that’s what everyone did back then,” Smith said. “We’d go on recess, and if you didn’t swing, you went and played marbles.”

That’s exactly what a small group of LHS alumni did on Saturday morning at the LHS baseball field to coincide with their 50th reunion this weekend.

“Some guys said, ‘Well, we’ll get down there to shoot and then we won’t be able to get up because we’re stiff and old,’” Smith said.

Even though they stopped playing marbles by the time they were in high school, members of the class of 1968 told The Herald Journal they still thought it would make for a good activity during the reunion because it unifies them.

“I remembered how much fun we had as kids, and I thought, you know, it would be so fun to get a group of guys who used to play marbles together,” said Denny Christensen, an LHS alumnus who graduated in 1968. “I thought about it for years, and then this reunion just seemed like the perfect time.”

Typically, the game of marbles goes like this: A circle about four feet in diameter is draw,n and 13 marbles, called mibs, are placed in the center of it. Then players all taking turns shoot at those marbles using a slightly bigger one, called a taw. The object of the game is for players to get all the mibs out of the ring. The player that hits the most out wins — and gets to keep the marbles.

Don Anderson, a ‘68 LHS alumnus who played on Saturday, half jokingly explained what it meant to be a young marble player.

“You need to understand something right off: being good at marbles elicited no respect or honor from anybody,” Anderson said. “It’s one of the lowliest sports there is.”

But on Saturday at the LHS baseball field — where alumni drew circles in the baseball diamond — the game seemed anything but lowly. Classmates were laughing, joking with one another and showing enthusiasm for competition.

“Now we’re cooking with gas,” Christensen told his classmates as they shot marbles.

Sure, marbles are a way for the LHS class of 1968 to bond, but there’s something else that looms large over them: the year in which they graduated. 1968 is still considered by most historians to be one of the single most pivotal years of the 20th century.

Classmates The Herald Journal spoke with admitted that living in Logan, they were somewhat insulated from many of the major events that took place during the year, including civil rights and the assassination of Martin Luther King, Jr.

“I genuinely feared there might be a mass uprising of blacks throughout the country,” Olsen said. “Even though Logan was isolated … it was a national experience of which we were aware.”

In other ways, the class of 1968 was inextricably linked to the events of the day, like the Vietnam War. That year, one of the war’s largest bombing campaigns, known as the Tet Offensive, made major headlines.

Several LHS students who graduated in 1968 would eventually go off to combat missions in Vietnam, Olsen said.

“Fighting in Vietnam was a very real possibility and very real thing of anxiety,” he said.

Olsen said LHS’s class of 1968 has met every five years since graduating half a century ago.

Some members of that class are no longer living, Olsen said, but for those that are still ticking, there’s been a steady maturity among them.

“Early on, there were still some people who were focused on who they were, what they had accomplished, where they had been, what they owned — sort of a continuation of some of the silliness,” he said. “What I have noticed in more recent reunions is … we don’t care what anyone’s income was, what anyone did professionally. We just want to rekindle friendships.”