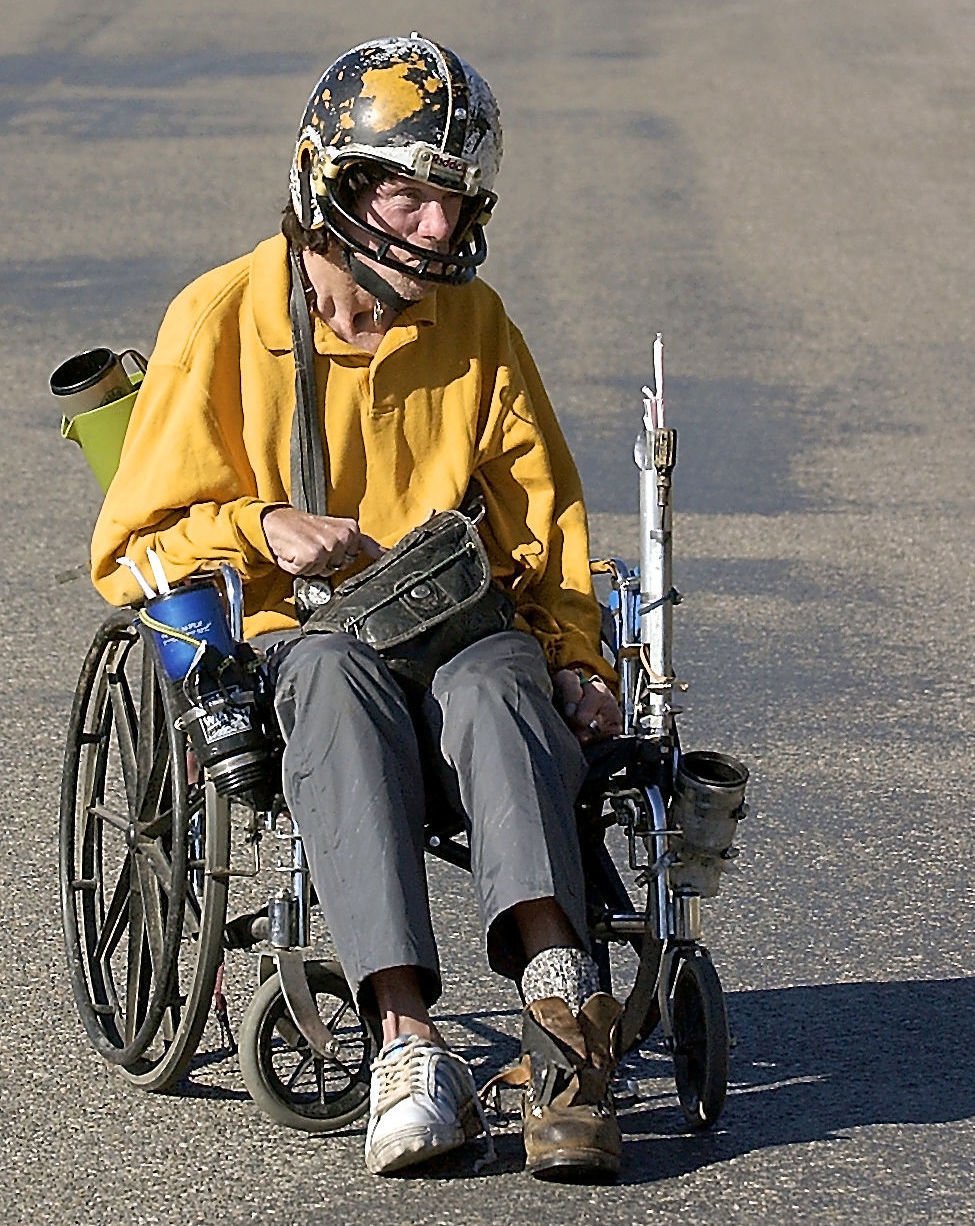 Des Devin, wearing his trademark football helmet, is seen navigating a Logan street in this photo taken for a 2003 Herald Journal article. 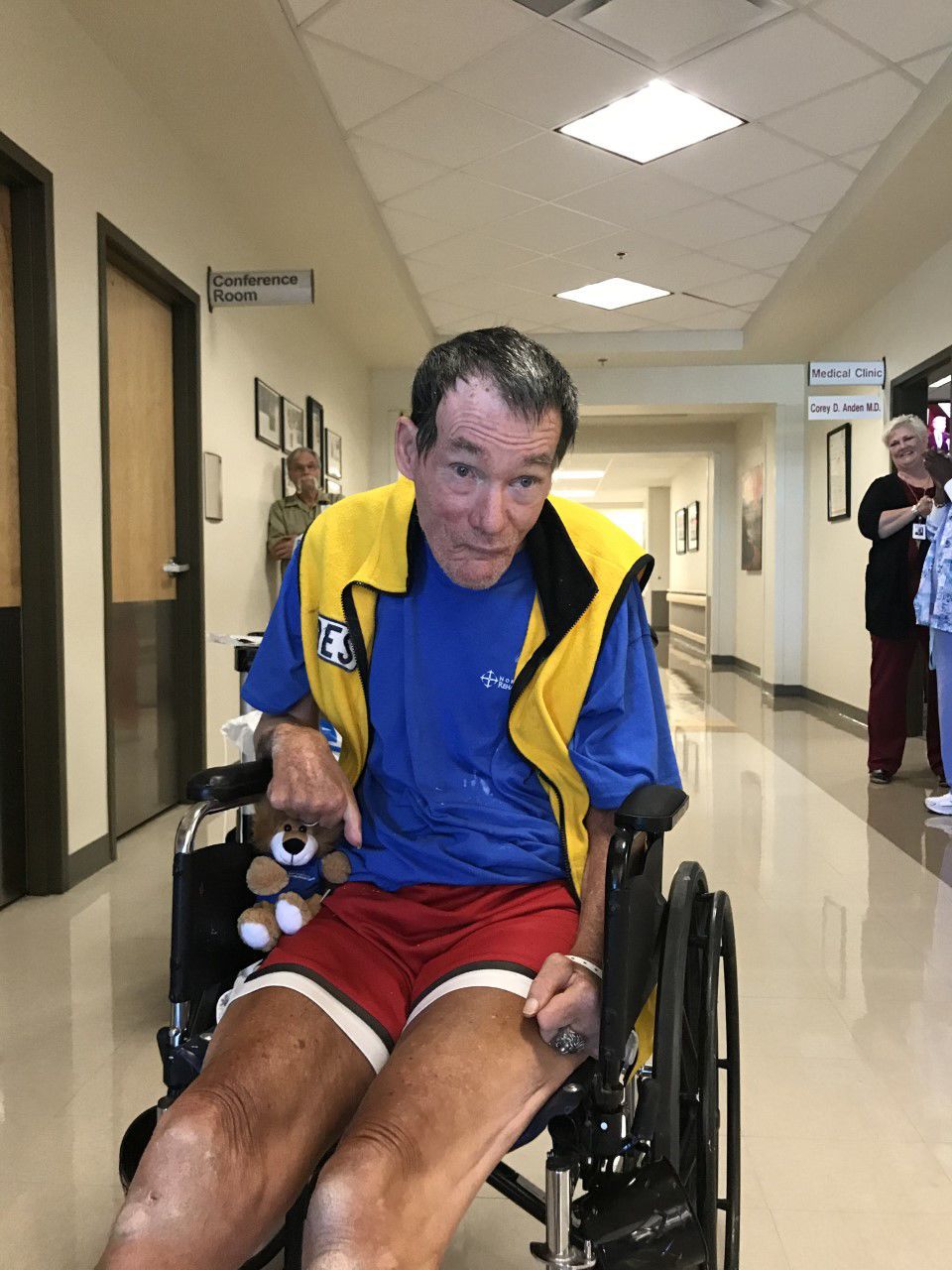 Des Devin, wearing his trademark football helmet, is seen navigating a Logan street in this photo taken for a 2003 Herald Journal article.

Des Devin became one of Logan’s most recognizable figures in the early 2000s by perilously crossing Main Street in his wheelchair on a regular basis.

The maneuver was made more eye-popping by the fact that the helmet-wearing Devin always did this at mid-block, pushing himself backwards with his feet because his gnarled hands couldn’t operate the wheelchair.

Devin, whose disability was the result of a brain injury suffered in a 1973 auto accident, succumbed to bladder cancer on Jan. 25 after 46 years of dealing with his disability in ways that both shocked and amazed the people who knew him.

“He was one of the most exasperating people I’ve ever met and yet one of the most exhilarating,” said friend and helper Joylynn Nelson, who met Devin one night in 2003, shortly after he’d arrived in Logan and was living homeless on the streets in his wheelchair. “He was brilliant. His mind was brilliant, even with the traumatic brain injury. I think he deeply affected everyone he ran into.”

A 2003 Herald Journal article explained how Devin wound up in Logan after virtually escaping from a nursing home in the Salt Lake City area and living on the streets there for four years.

The accident that changed his life occurred on Christmas Day 1973, when the 26-year-old Army veteran was driving on Interstate 25 between Cheyenne and Denver. Among other things, it severely affected his speech and seized his hands in a closed position. He spent 25 years in nursing homes before becoming inspired to strike out on his own by a caregiver named Gertrude, who he spoke of often.

Devin’s goal in coming to Logan was to live in a house of his own, and with the help of Nelson, Logan real estate agent Bill Van Dyke and others, he was able to achieve that. Devin’s meager disability income presented a large roadblock, but after a couple of disappointing false starts, Van Dyke helped him close on a small dwelling at 119 W. 500 North in Logan, where he became the neighborhood’s most recognizable resident.

He pursued his quest for independent living while sleeping at night in Logan parks and building recesses.

“I teach classes for Bernina Fabrics, and as I was leaving a class one night, I saw him in his wheelchair pushing himself backwards down Federal Avenue.” Nelson recalls. “He said he was going to Caffe Ibis, and when I told him the business was closed, he said he’d just wait there until morning.”

Nelson went home and got her husband, and the couple tried to convince Devin to come home with them, but he wouldn’t have it.

“We left him some Army blankets and put them around his legs and shoulders. In the morning I called the Caffe Ibis, and sure enough he was there,” Nelson said. “They were always so good to him.”

That night began a friendship that would last 17 years through many difficult times. Once Devin found a home, Nelson helped him get weekly living assistance from Community Nursing Services. In addition to three visits a week by nurses, Nelson would come once a week to help Devin with his bills, and another helper, Irene Ayala, would bring by food regularly.

Devin’s locally famous excursions across Main Street came to an end around a decade ago, after dozens of traffic citations and visits to Logan Municipal Court, where Judge Cheryl Russell eventually told him she would tolerate no more infractions. Nelson said Russell had always been kind and patient with Devin but felt she finally had to draw the line.

Devin did not want a funeral, but Nelson contacted the newspaper Friday in hopes of eulogizing her friend and letting the community know of his passing. Devin’s indomitable spirit and the unique effect he had on people are things she hopes he’ll be remembered for.

“When I would take him to the VA, I’m not kidding you, other disabled veterans would stand taller, stand straighter, sit up taller as they watched this terribly infirm man with one arm bent and one arm straight, his fingers fused to his palms, unable to walk on his own,” she said.

She told another story about Devin with a measure of incredulity. It involves a crow that was often perched in a tree in Devin’s yard that he nicknamed Harry and claimed to be able to communicate with. In fact, Devin claimed Harry had been with him in Salt Lake City and that Harry told him to come to Logan, where people would reach out to help him.

“One day I was leaving the north Walmart, and there was a big, massive crow sitting on the concrete base of one of the big lights in the parking lot,” Nelson recalled. “I thought to myself, ‘Come on Joylynn, you do not believe in Harry the Crow, even though there is a crow outside his house. You do not believe that this crow is taking care of Des, or whatever.’”

Nelson said she started to drive home but on the way had a strong urge to turn around and go check on Devin.

“As I drove up, there was his wheelchair tipped into the gutter with him on the ground. It was probably February or March because it was still cold. I jumped out of the car and said, ‘Des, what happened?’ and the first thing he said to me was, ‘I told Harry to go get Arnie.’”

Arnie was a nickname Devin had given Nelson.

With a quiver in her voice, Nelson on Friday offered one last anecdote about Des Devin: