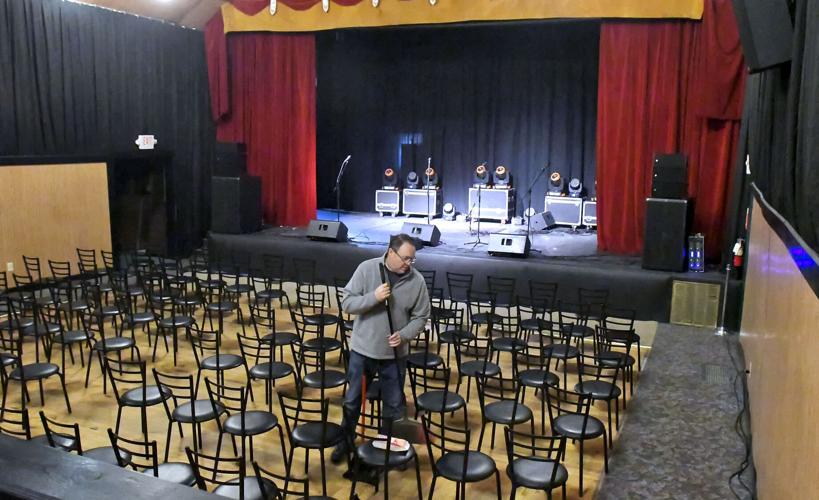 Marlon Moe sweeps the floor following a performance at The Main in Smithfield on Saturday, Feb. 12. 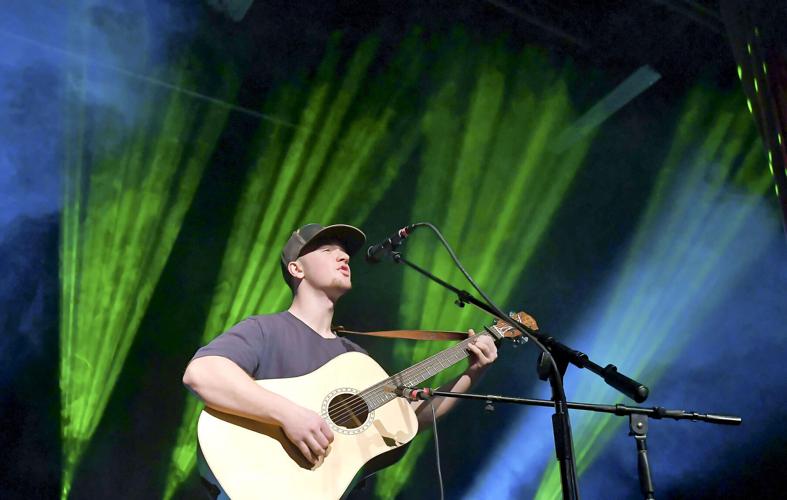 Brooker Low performs at The Main on Saturday in Smithfield. 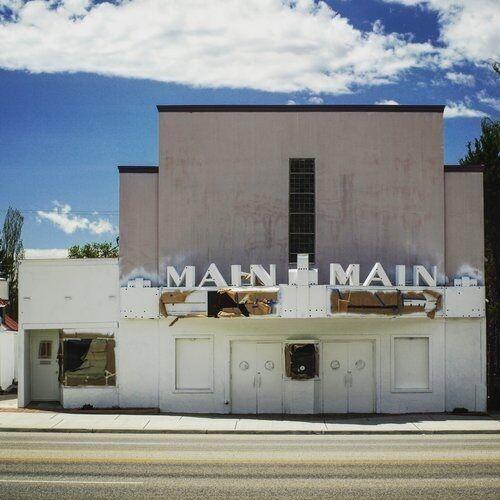 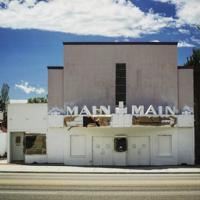 An undated photo of The Main Theater uploaded to cinematreasures.org by user "Granola" on Sept. 28, 2017.

Marlon Moe sweeps the floor following a performance at The Main in Smithfield on Saturday, Feb. 12.

Brooker Low performs at The Main on Saturday in Smithfield.

An undated photo of The Main Theater uploaded to cinematreasures.org by user "Granola" on Sept. 28, 2017.

Mother-daughter duo Jennifer and Macady Moe have spent the last few years “flipping” homes — buying low-value or deteriorated properties, renovating, and quickly selling for a profit. As a business it’s straightforward enough, but about a year ago the Moes set their sights on a much more complex venture: revitalizing nearly an entire block in downtown Smithfield.

This project kicked off with the opening of The Main, formerly the Main Theater, for concerts, shows and other performances in October. Since then, the Moes have continued to renovate the late-19th century building while prepping for future growth in the neighboring structures — the venue is just the first leg of the much broader effort to revitalize Smithfield’s downtown spearheaded by the Moes’ company Jomoeco.

“All these buildings are connected, so it's one big project,” Macady said. “Basically just trying to revive the block, little by little, and we wanted to start with the theater because we felt like it'd be most beneficial to the community.”

This week, The Main was joined by The Charcoal Grill, adding a culinary component to what the Moes and others involved in the project hope will become a social hub of the city. The restaurant, which had a “soft opening” during an open house at The Main on Feb. 12, officially opened on Wednesday.

“I've had people walk in, 'I'm so glad that you're here,'” The Charcoal Grill co-owner Mindie Funk said. “There's not a lot going on here as far as restaurants, and then when I heard about the theater too, I thought this would be great.”

The Moes see the entire block as a holistic operation made up of many moving parts. Jennifer said the block would take at least a year to reach fruition, but ideally not much longer.

The first business to come aboard was the newly opened grill. The restaurant, which first opened at Birch Creek Golf Course last spring, made the move after struggling with consistency at their former location. Funk, who owns The Charcoal Grill with husband John, said she hoped they could help Smithfield “come alive again."

“Since we've moved down here, we've got so many calls, so many messages about how they're excited about how we are on Main Street now,” Funk said, adding the new location was much more accessible. She said they hoped to provide quality American fare to the region with a menu featuring smoked meats, a “fan-favorite” steak on fries with chimichurri sauce and more.

With the first project up and running and the second freshly operating, Jennifer said the next step was to begin liquidating the defunct antique shop on the block, as well as other items inside the buildings.

Jennifer said they couldn’t dive too deeply into the business side of things, as Jomoeco and property owner Marty Spicer were still “in that process.” When contacted by The Herald Journal, Spicer said the Moes were “doing really good things” for downtown Smithfield.

The Main began as the Hillyard Hall in the late 1800s, a community building used for stage, dances, roller skating, boxing and even a campaign stop from presidential candidate Woodrow Wilson. In 1910, the hall transitioned to primarily screen movies.

After eight decades of cinema operation, the theater was sold in 1996 and briefly used as a community stage for the Stage Stop Theatre Co. Reopened soon afterward as a movie theater by Spicer, the building’s cinematic revival came to an end in 2003, and it’s been closed since 2004. In the intervening years, rumors swirled around the theater, with some claiming the building was haunted.

Now, open again just under two decades later, the Moes are excited to showcase The Main for a new generation.

“We've had a lot of people show interest in the theater, people that are local, they grew up here, maybe they were around when it was open and such — or maybe they weren't and they've never seen it in use,” Macady said. “Even while we're just working and we're closed, we have people knock on the doors, so we're hoping that people get to come and see these buildings open that they have lived around for 20 years that have been shut.”

According to U.S. Census Bureau estimates for 2021, nearly half of Smithfield residents weren’t even alive the last time the theater at 141 N. Main Street was open for business.

Though the Moes first started the process of acquiring The Main about a year ago, they were only able to begin renovations at the end of September — 30 days before they opened. Jennifer said the cleanup job was a “horrendous” task, starting from scratch with a $0 budget and a month to do it, dealing with years of disuse and vandalism. Despite that, she said, it has been “exciting” and “really quite a fun project.”

After that one-month flurry of activity, though, the renovations were not finished — and still aren’t. The Main opened to the public on Oct. 29, and has held regular shows since, even as renovations continue. Macady said hosting performances in a somewhat unfinished space often requires a unique approach.

“It's taken a lot of creativity to try to be really resourceful, using everything on-site as far as renovations go, but also being resourceful in what types of shows we can have here using existing equipment,” she said.

Jennifer said the help from experienced local sound technicians has gone a long way toward helping The Main through the early stages.

“We've built it from our first show that was just super, super simple, to Mark Lusk, who can put on a full show. He's used to doing big live concerts — so he's really been resourceful for us. We also have another sound guy that started with us and still is with us, Owen Sidwell; he is really good that way.”

Though still unfinished, the venue is by no means in a state of disrepair, and the Moes see renovations wrapping up within the year. Despite the venue’s newness and ongoing improvements, Jennifer said the performers so far have enjoyed playing there.

Part of their strategy, in attracting audiences as well as acts, has been creating a venue that’s less casual and lends itself to providing “more of a show.” Jennifer also said paying artists well was important to the operation.

“That for me is so fulfilling, because I want to see these bands and artists walk away with money in their pocket and this venue allows me to do that, where the other ones don't necessarily bring that cash flow in for them,” she said.

The positive experiences of performers have spilled over to helping book future shows.

“We've been really positively supported,” Macady said. “We never have a show that we don't have a group afterwards that is wanting to book a gig here. I think we've had really good support from the musician community up here, they've been really awesome.”

Jennifer said despite her concerns of social media copycats — she noticed other venues using the phrase “Join us,” which she said was The Main’s tagline — they aren’t in competition with many of the more-established venues in the valley.

“I'm seeing a lot of our stuff copied. It's interesting 'cause I think that they think they're in competition with us, but truly, we step back and say 'We're not in competition with Logan.' There would be no way I could compete with USU, WhySound, Yellow House, Eccles Theatre, Utah Theatre.”

“We want artists to be able to do both types of shows,” Macady added.

“Yeah, like this is just a fun one, a different venue for 'em,” Jennifer said. “Again, I feel like we're a little more private. It allows me to do a little bit more of an upgrade of the show for the artist. So really that's what I love about it.”

One of the unique advantages of the venue is its versatility, being able to host local concerts, touring shows or speakers — upcoming shows include relationship coach Matt Townsend and hip-hop artist Obeeyay — as well as retaining the capability to show movies.

“It's kind of fun, because people walk in and they're expecting a movie theater but then we're able to do any kind of show really,” Jennifer said.

“It's also just a really cool venue because it does have so much capacity for change. If someone wants to do their own thing here, we have so many requests that they can make; they really can set up any type of event that they want, so it's been a really good space I feel,” Macady said of the 300-capacity venue. “Lots of opportunity here.”

The Moes first started out in the Sandy-Draper area, where they lived prior to their flipping career. From there, they moved all over the state, going where their projects took them, and in 2020, that road led to Cache Valley. While working on a home here, they caught word of the mostly out-of-use properties in Smithfield’s downtown and leapt at the chance to do something there.

The somewhat sharp left turn from house flipping to running a performance venue wasn’t as abrupt as it may seem, Jennifer said.

“It's actually our passion. So the theater, again — we are flippers, we love to take something old and do something new with it,” she said. “But music is our passion, like passion passion.”

Macady said she’s enjoyed the experience of getting to know and work with the Smithfield community.

“We've been really lucky to meet some really talented people that want to be here and want to see Smithfield come back to life,” she said. “Both musically and business-wise, and just lifestyle-wise, it's been really cool to see different kinds of people super excited and get to work with them.”

As the start of the open house on Feb. 12 drew near, one of the artists booked to perform throughout the day arrived and called out to Jennifer.

“Just walking around, it's so different!” she said.

“I know, it's so exciting to have you," Jennifer yelled back.

“Thank you for havin' me!” the artist said. “I haven't been on this stage probably since I was in a play."