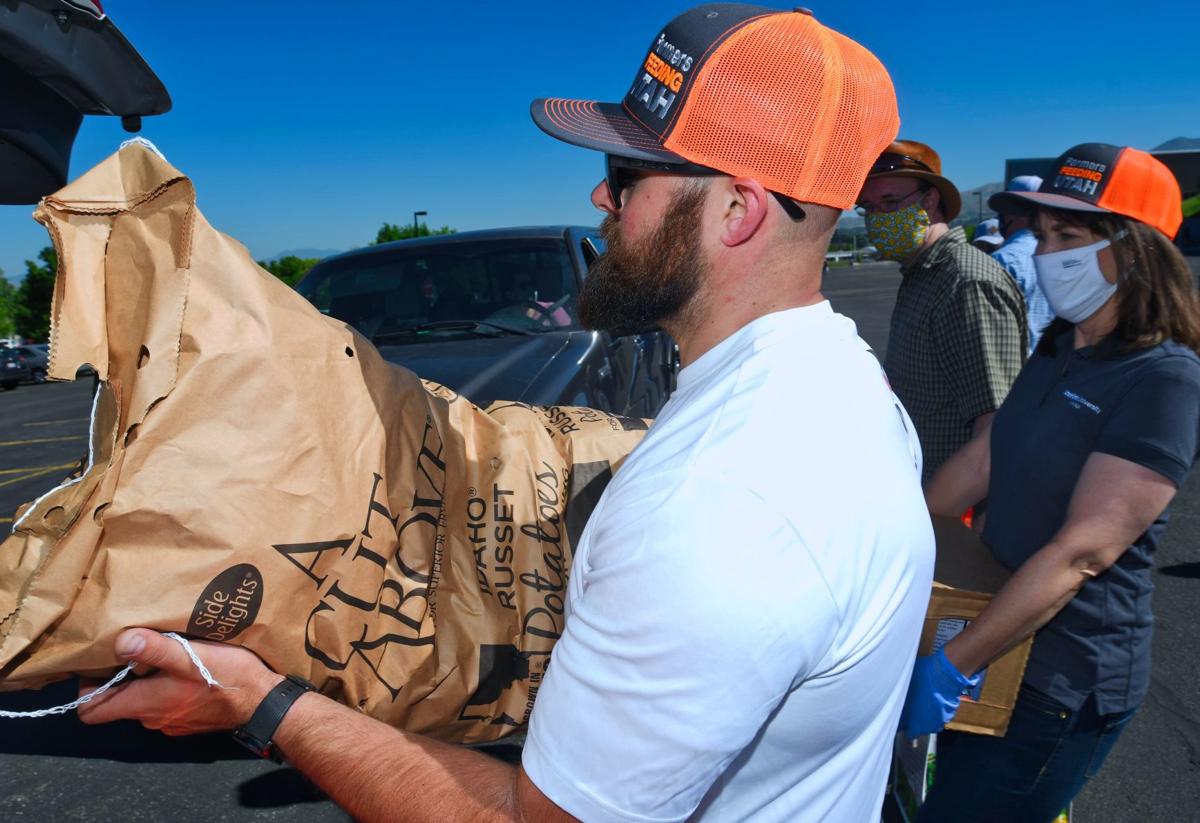 Danny Swett loads potatoes into a car during a Farmers Feeding Utah event on Tuesday at USU. 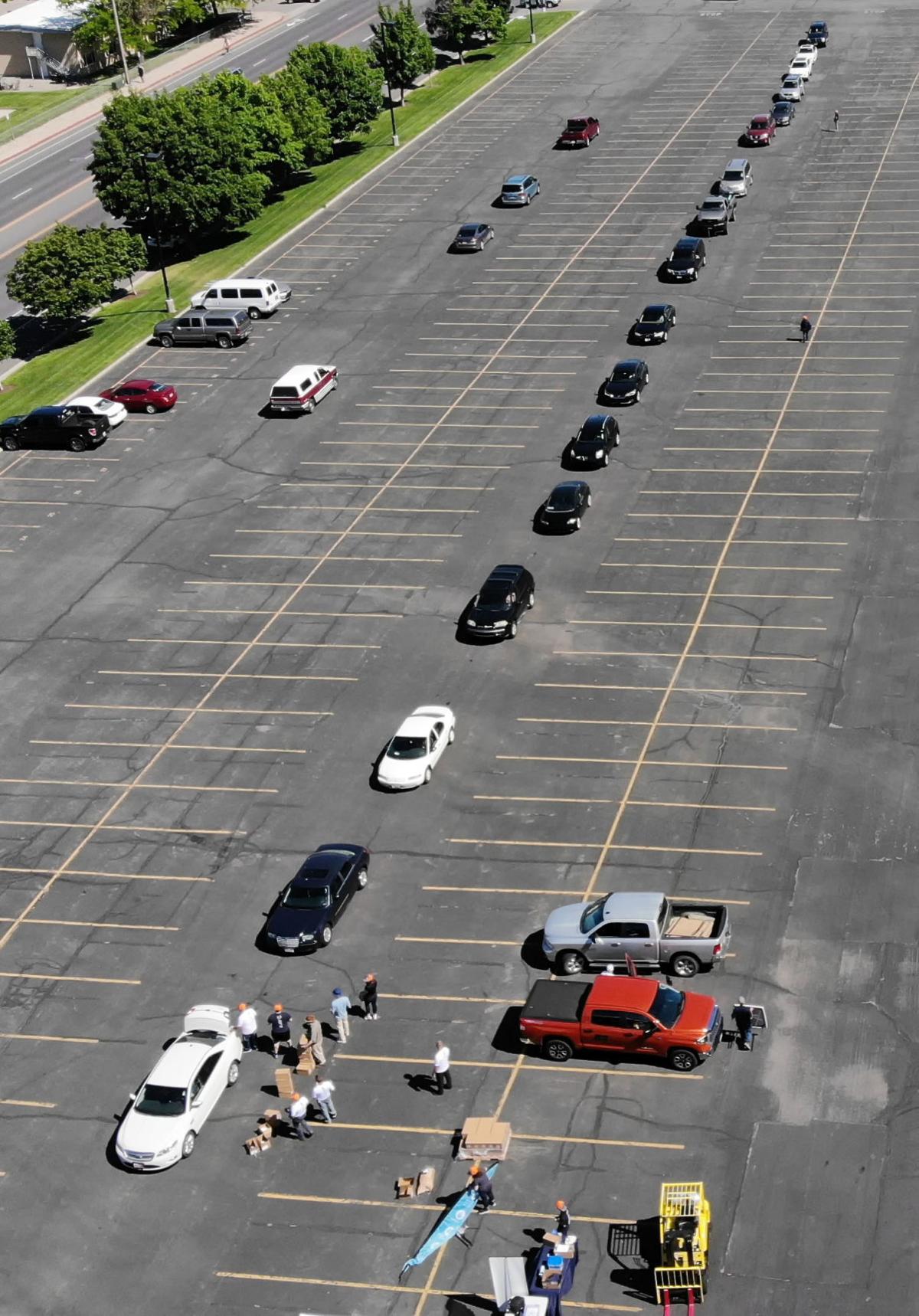 Cars line up in the Maverik Stadium parking lot to receive food during a Farmers Feeding Utah event on Tuesday. 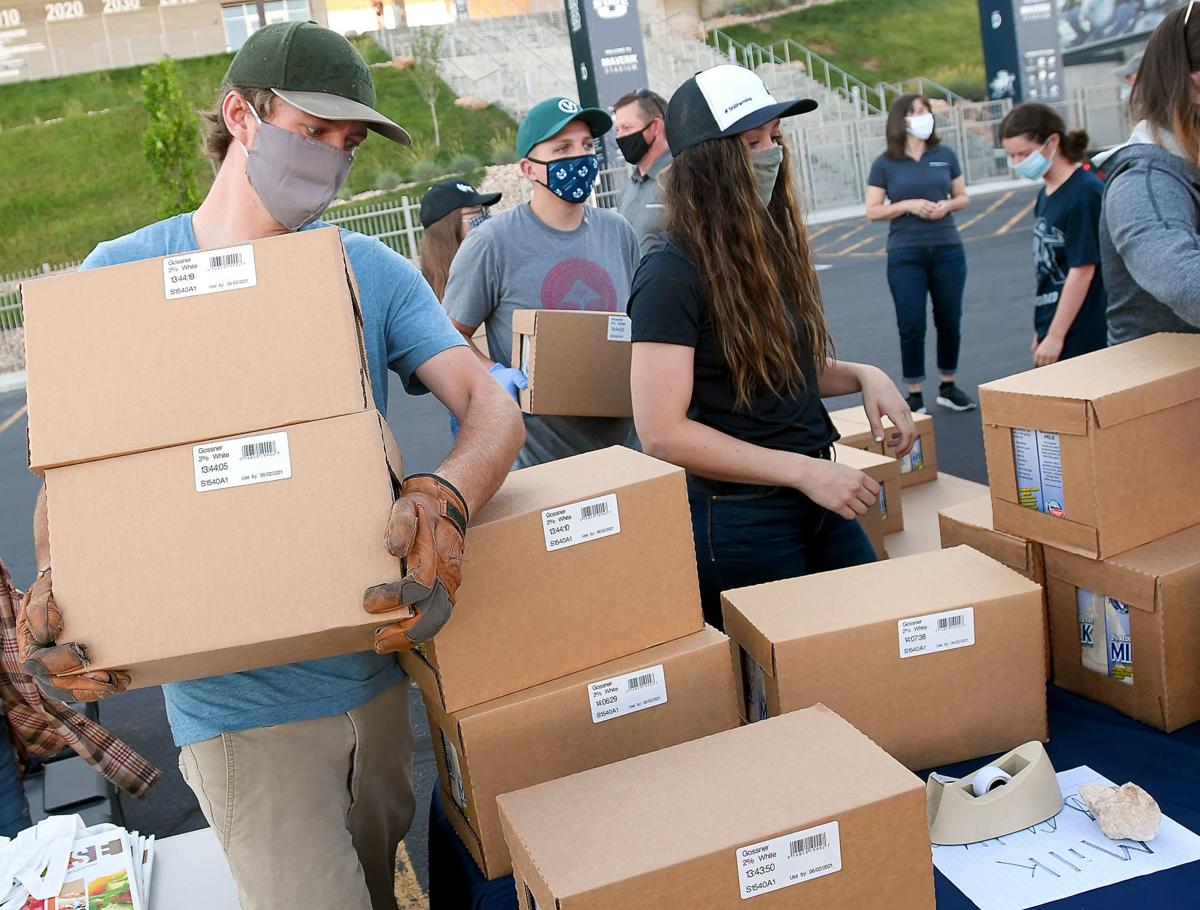 Danny Swett loads potatoes into a car during a Farmers Feeding Utah event on Tuesday at USU.

Cars line up in the Maverik Stadium parking lot to receive food during a Farmers Feeding Utah event on Tuesday.

After receiving more than $60,000 in donations, thousands of pounds of food was organized for pickup in several locations across Northern Utah as part of the Farmers Feeding Utah’s second “miracle” project on Tuesday.

The Utah Farm Bureau created the Farmers Feeding Utah program in May to bridge the gap between those struggling with food insecurity and farmers and ranchers who have had their supply chains disrupted during COVID-19 related shutdowns.

“For a long time, we had farmers dumping milk on the ground, and it was just tragic because they’d lost their markets,” said Brett Behling, the business development director for the Utah Farm Bureau. “So we were like, ‘We have got to figure out a way to process that, turn it into something positive.’”

In Cache County, unemployment has risen 30% due to COVID-19, and the Cache Community Food Pantry has seen a 20% increase in the number of families and individuals needing its services. But with regular pantry fundraiser and food drive cancellations and grocery stores not donating as much excess products, local food banks were feeling stretched. So Utah State University partnered with Farmers Feeding Utah to help boost the Cache Community Food Pantry’s supply.

“We knew that they were in need, and then we talked to Tremonton’s, and they almost had to close their doors, so we knew they were also in need,” said Heidi LeBlanc, the director of the Hunger Solutions Institute at USU. “And so we thought we should do a project up here.”

Dozens of local farms came together to provide 8,000 lbs. of meat, 42,000 lbs. of potatoes, 40,000 lbs. of milk, two semi-trucks full of cheese and another full of eggs delivered to dropoff sites in Cache, Rich and Box Elder counties on Tuesday, according to Behling.

More than 400 cars lined up at USU’s Maverik Stadium to receive bags of potatoes, meat, eggs, cheese and milk as volunteers loaded their vehicles. Some had multiple families in the car or were picking up provisions for others stuck in their homes. And this was just the pop-up pantry in Cache County — another 100 came to the drive-through at the Cache Community Food Pantry.

Though the Cache Community Food Pantry has foregone those needing help to fill out an application for those who need assistance during the pandemic, the Maverik Stadium “pop-up pantry” was organized to help accommodate those who are leery of accepting government help, such as the Hispanic or Latinx community. More than 100 of the 406 cars that drove through belonged to that demographic, according to one volunteer.

Palmer, whose company runs the website for Farmers Feeding Utah, added that seeing the multitude of donations under $100, such as $5 contributions, makes him emotional.

“It’s the needy helping the needy, the struggling helping the struggling,” he said. “And farmers aren’t known for taking charity, they’re known for working hard. So the fact that we’re able to find a way to buy the product and get it to those in need, it’s been really rewarding.”

The first miracle project resulted in more than $150,000 in monetary donations, which went to farmers and ranchers who supplied more than 600 live sheep and 16,000 lbs. of frozen lamb, as well as 10,000 lbs. of flour to the Navajo Nation, according to Lt. Gov. Spencer Cox. Cox announced the Northern Utah project days later.

On May 28, Cox said he hoped to receive $150,000 for the second miracle project. Though the monetary amount fell short of his plea, the Farmers Feeding Utah program has received more than $200,000 for both the Navajo Nation and the Northern Utah projects.