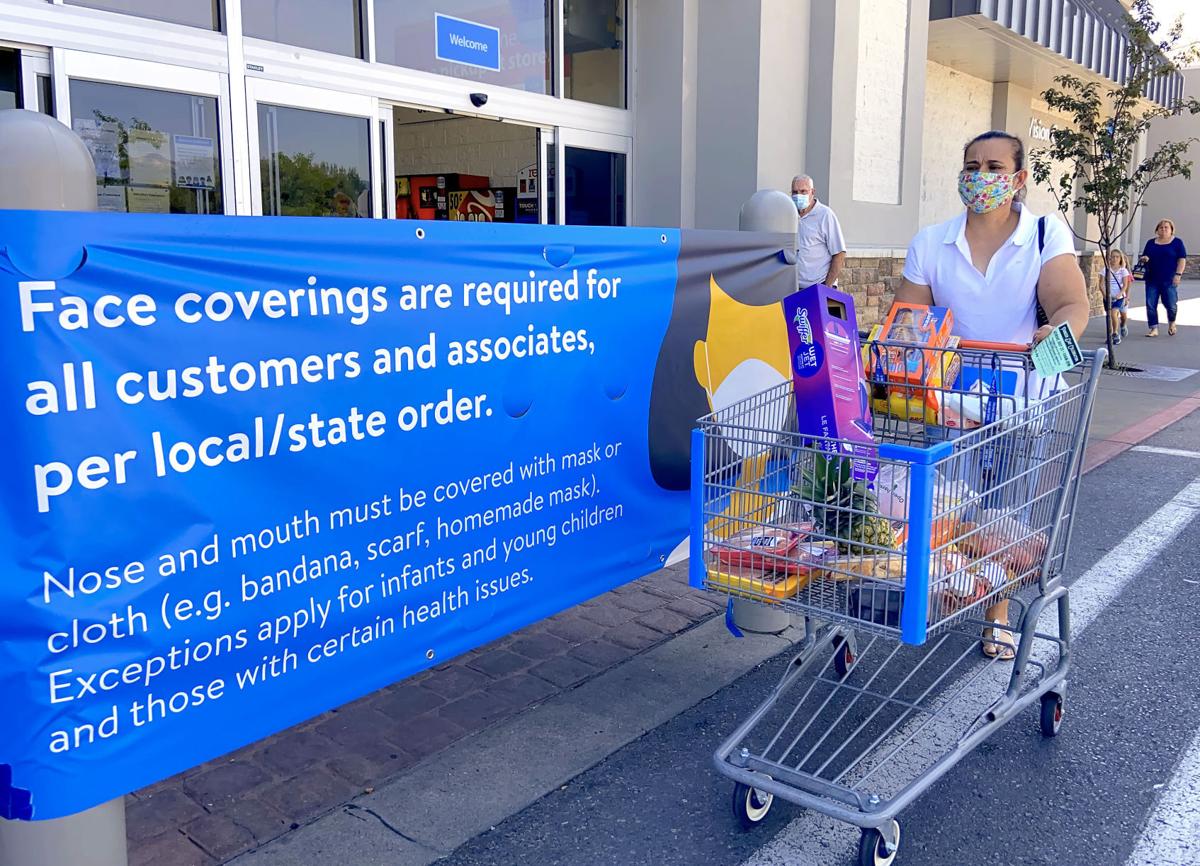 A shopper walks past a sign at Walmart announcing that face coverings are required to enter the store on Monday in Logan, Utah. 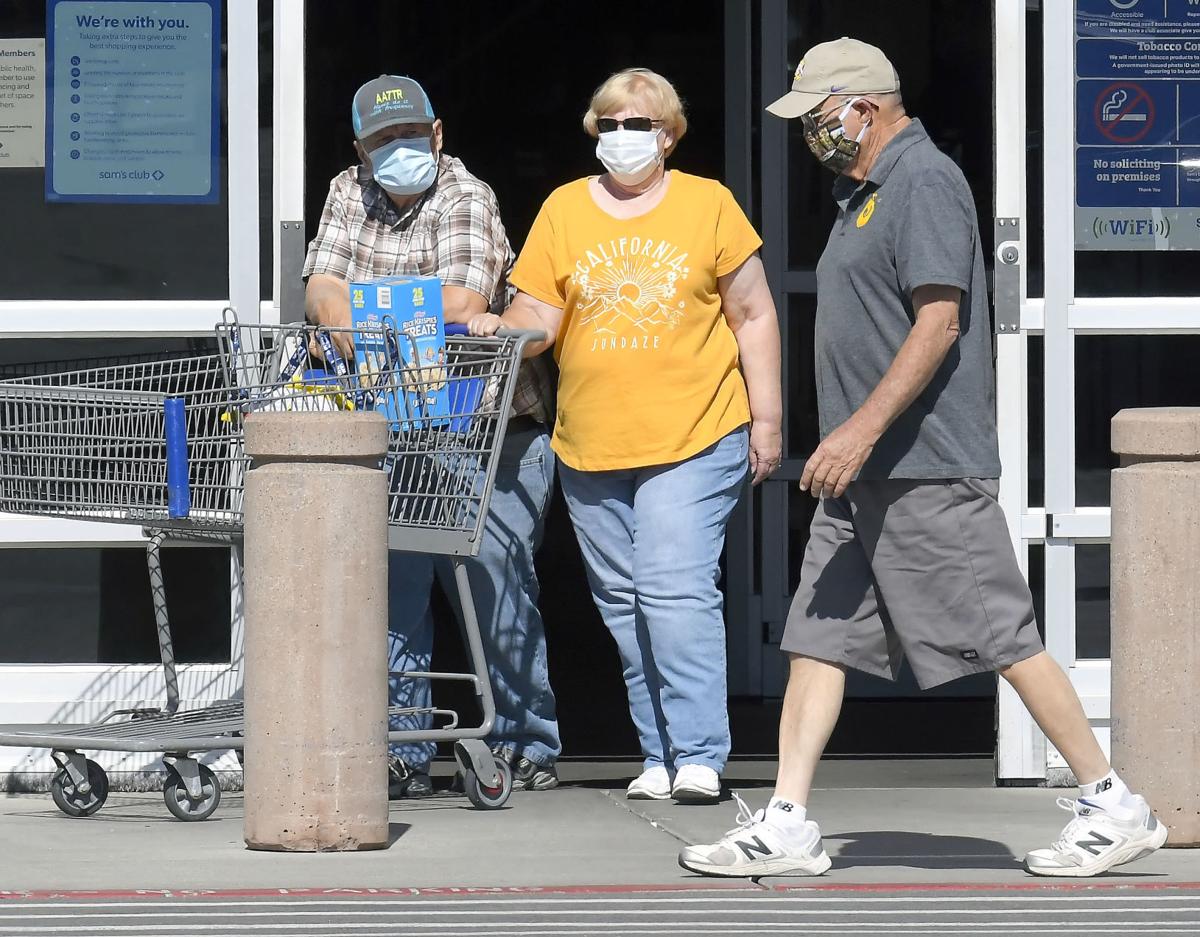 Shoppers walk past the doors of Sam’s Club on Monday in Logan. Many businesses have started requiring face coverings to enter the store, and Logan Mayor Holly Daines is now asking Utah Gov. Gary Herbert for permission to impose a citywide mask mandate.

A shopper walks past a sign at Walmart announcing that face coverings are required to enter the store on Monday in Logan, Utah.

Shoppers walk past the doors of Sam’s Club on Monday in Logan. Many businesses have started requiring face coverings to enter the store, and Logan Mayor Holly Daines is now asking Utah Gov. Gary Herbert for permission to impose a citywide mask mandate.

Five days ago, it was announced masks were required for shopping in-store at all Walmart and Sam’s Club locations across the country to reduce the spread of COVID-19. The majority of shoppers who went to the Walmart Supercenter in South Logan on Monday — the day the rule went into effect — wore masks in compliance with the mandate.

But when people showed up without a face covering, they were ushered in without comment.

“I just think it’s dumb, and it’s pointless to like spend money on a mask,” said Domanick Duncombe, one of Monday’s Walmart customers.

Duncombe did not wear a mask in the store, nor was he asked to don one by the employee watching the front door.

And he wasn’t alone. A few people walked up to the door, saw the sign stating masks were mandatory, then turned around to retrieve a mask from their vehicles. But most of the people who entered the store without a face covering went about their shopping unquestioned.

“There may be situations where the customer might not be able to wear it, and our health ambassadors will be trained on those exceptions,” said Casey Staheli, a spokesperson for Walmart. “To help reduce friction for the shopper and make the process as easy as possible for everyone, our health ambassadors have received special training to make the process as smooth as possible for customers.”

However, most shoppers who entered the store without a covering said they were not told where to find the masks supposedly offered by the store in case customers forget. And none said they were approached while shopping.

Roark Park said even if he had been asked, he would not have complied.

His wife, Sabra, added if they were told to wear a mask, it would violate their freedom of choice.

“They can’t just force us to,” she said. “If they do, that’s kind of breaking the law.”

Roark also said he was more concerned with the health defects caused by wearing a mask than the virus they’re meant to limit the spread of.

“It’s not very healthy because we’re breathing our own carbon dioxide, and it’s killing us,” he said. “To have that inside your body itself, actually you can do more damage than not having a mask on.”

However, Angela Balls, a respiratory therapist and educator with Logan Regional Hospital, said CO2 poisoning from wearing a mask is impossible.

“With the cloth coverings, or the regular surgical mask, as well as the N-95 mask,” she said, “you have enough ventilation you’re not rebreathing your CO2.”

Multiple videos have gone viral on Facebook of nurses and healthcare workers testing their blood-oxygen saturation before, during and after wearing the masks, Balls mentioned, showing little-to-no change with various face coverings.

Although, in a blog post for the American Lung Association, Dr. David G. Hill wrote, “There is some evidence, however, that prolonged use of N-95 masks in patients with preexisting lung disease could cause some build-up of carbon dioxide levels in the body. People with preexisting lung problems should discuss mask wearing concerns with their health care providers.”

Others at the store said if they were asked to wear a mask, they would have covered up, like Mike Tremayne, who had a mask in his car but was not asked to wear one. He walked past the sign at the front door announcing the mandate.

“If they have a sign saying that (masks are mandatory), then I will oblige to that, you know, because that’s their right to say whether they want a mask or not,” he said. “I’m so-so on it ... but if they want one, I’ll wear it.”

Diane Chesley wore a mask because she felt it was the right thing to do.

“But I don’t really feel like we should be forced,” she said. “I just feel like it’s not letting us have our agency.”

Chesley added she doesn’t want people dying and getting sick, so she’ll wear a mask. But she said she wishes people who are sick would just stay home so healthy people wouldn’t be forced to wear a mask.

However, Balls said the majority of those who spread COVID-19 have mild or no symptoms, leading them to believe they’re healthy and have no need to self-isolate.

Karrie McClung said she put hers on, not because she agrees with the mandate, but out of respect.

McClung, a member of the Church of Jesus Christ of Latter-day Saints, said she would be obedient to what businesses, church officials and the state ask, but she would also try to shop online more to reduce having to wear a face covering.

This sentiment was echoed by Cambrie Wilson. When Walmart made its decision public on Wednesday, Wilson posted about it on the Logan Classifieds Facebook page to see what others thought of the mandate.

Within 24 hours, the post had nearly 800 comments before an administrator for the page turned them off — mostly consisting of arguments ranging from the validity of masks’ role in reducing the spread of the virus, whether mandates like this are detrimental to freedom and if COVID-19 is even real.

Wilson said she purposefully stocked up on weeks’ worth of groceries on Thursday to avoid wearing a mask and the backlog of online pickup.

“I think the masks are dumb,” she said. “I think it’s a little too late. If it was such a threat, they should’ve put this stuff into place in March when the whole coronavirus broke out.”

However others, like Devin Davis, said the mandate hasn’t changed their shopping habits as they’ve been wearing a mask since it was recommended by the Centers for Disease Control in April. But Davis added he feels more comfortable shopping now that more people are also taking the precaution.

Emily Major agreed and added as a college student there aren’t many other options for low-income shoppers.

“I think it’s a good idea, just because COVID is crazy, and Walmart is equally crazy,” she said. “If COVID is gonna spread, it’s gonna be in Walmart, or grocery stores, and it would suck if Walmart gets shut down because that would be bad for the business and bad for a lot of stuff.”

The Bear River Health Department wrote a statement to The Herald Journal which said “Face coverings are part of the strategy to reduce spread of COVID-19, it is not the entire strategy!”

BRHD’s Joshua Greer added the key is to wear clean masks and to continue physical distancing precautions, regardless of mask-wearing.

“We’ve got to be careful against the thought that when we put that mask on, we’re immune to everything now,” he said. “Virus particles are small. They’re going to get through the mask. What we’re stopping is the water particles they’re going to hitch a ride on.”

Balls added consistency in mask wearing, such as proper fit (covering the nose and mouth) is crucial for preventing the spread of the virus.

Similarly, Walmart announced the new rule to bring consistency throughout its 5,000 stores and clubs, where 65% were in areas with some form of government-mandate concerning face coverings.