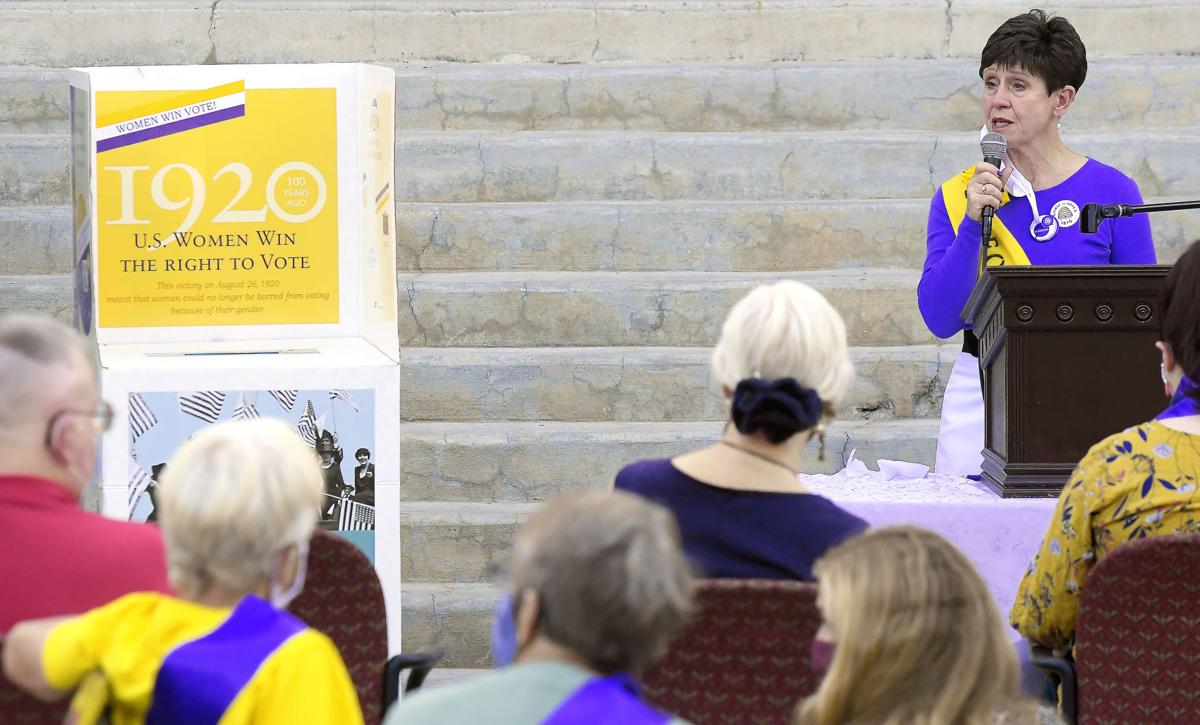 Barbara Tidwell speaks at an event on Wednesday celebrating the 100th anniversary of women getting the right to vote. 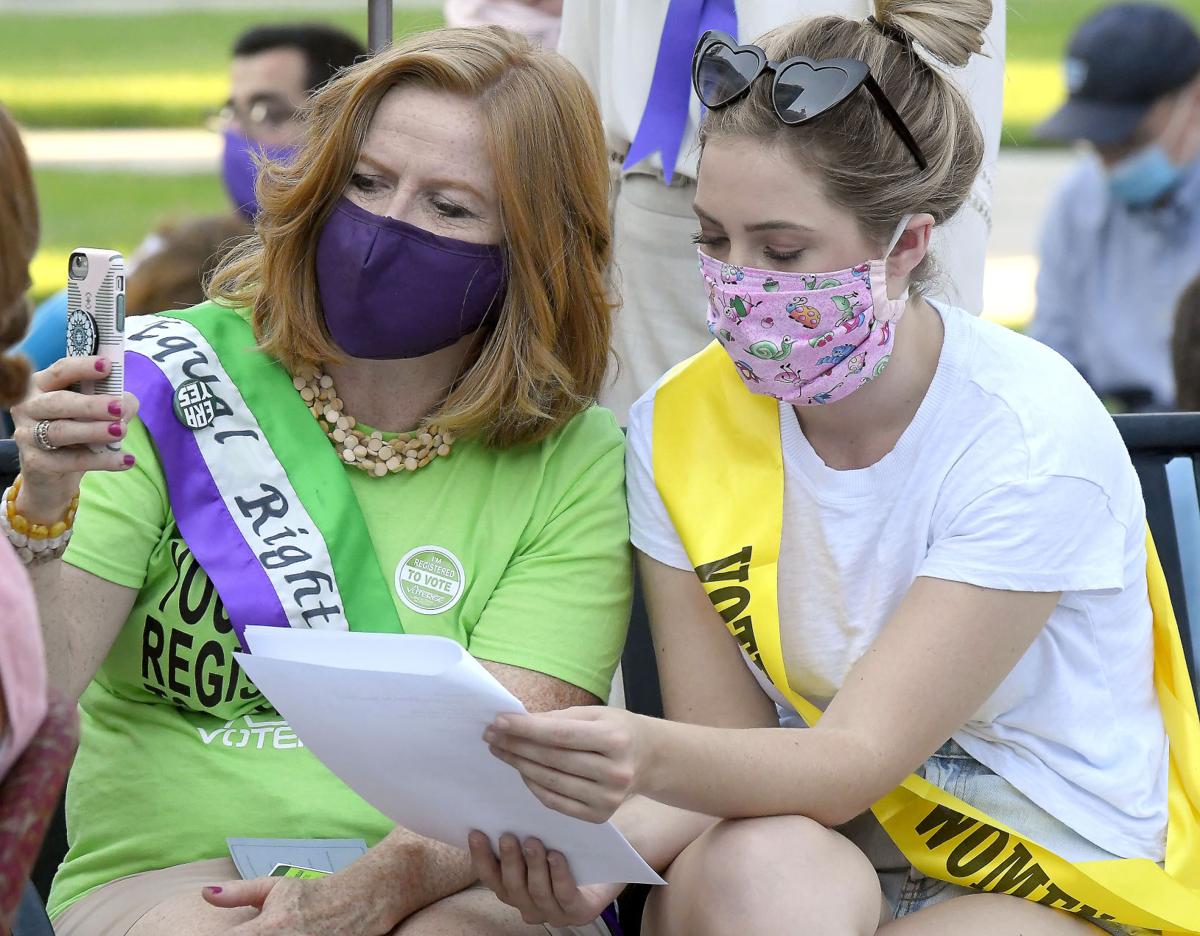 Kelly Whited Jones, left, and Lindsay Whited listen to a speaker at an event on Wednesday, celebrating the 100th anniversary of women getting the right to vote.

Barbara Tidwell speaks at an event on Wednesday celebrating the 100th anniversary of women getting the right to vote.

Kelly Whited Jones, left, and Lindsay Whited listen to a speaker at an event on Wednesday, celebrating the 100th anniversary of women getting the right to vote.

1870. 1896. 1920. 1965. 1975. These are years when women and later, disenfranchised minorities, finally gained full access to vote in Utah, and they were the anniversaries celebrated outside the Historic Cache County Courthouse on Wednesday evening.

“We were originally planning to hold this celebration in March, but this may be the best day to have our celebration,” said Barbara Tidwell, organizer and co-chair of Cache Celebration of Women Suffrage 2020, to introduce the event commemorating the 100th anniversary of the certification of the 19th Amendment.

“Women in Utah and women at Utah State have been setting the path for over 150 years,” Cockett told The Herald Journal, citing the accomplishments of Vendla Berntson — the first student to enroll at USU — to NASA’s Mary Cleave to Cockett, herself — the first female president of the university.

In honor of Berntson, who was unable to finish her education due to the $5 fee to re-enroll each year, Cockett announced a new scholarship at USU to help students facing financial difficulties complete their degrees.

Karina Andelin Brown, the Democratic candidate for lieutenant governor in the upcoming election, said she didn’t realize she’d be on the ballot in November when she agreed to be the other co-chair for the Cache Celebration of Women 2020, but it gives the celebration even more significance.

“I’m a first-generation woman voter in my family because my grandmother, who was born in 1922, thought my grandfather should vote for her, and my mother didn’t become a citizen until two years before she passed away,” Brown said. “So I didn’t grow up in a family where women voted, and so it’s a special honor for me to highlight our civic privileges and our history.”

The pioneer women who settled in Utah were the first to vote in the United States. This right was stripped with the passing of the Edmunds Tucker Act (or Anti-Plural Marriage Act) of 1887, but many locals — including Peter Maughan, one of the founders of Wellsville — continued to fight for equitable voting access.

“Utah is unique because women had to work to get suffrage twice,” Worthen said. “But all eight of Cache County’s delegates to the 1895 convention to petition for statehood were ardent supporters of suffrage and campaigned for and worked for women’s suffrage to be included in the state’s constitution.”

While the momentous dates of the Utah women voting, the 19th Amendment, the Votings Rights Act of 1965, and the Racial Discrimination Act of 1975, have paved the way to equality, the work is not complete according to several speakers, like Ana Liquin.

“My husband is white, and I’m Latina,” she said. “When we went to vote, he gave them his name and they gave him his ballot. I had to show my ID, and my proof of address, and dig around in my purse. But I was born here. I’m an American citizen by birthright, and yet there’s still inequality we’re seeing.”

With barriers, there is no justice, Liquin said to applause.

Whitney Lee Geertsen, an advocate for persons with disabilities, said individuals with neurological and physical disabilities also face discrimination and can struggle to make it to polls.

“Those who are placed under guardianship or are deemed mentally incompetent have their voting rights automatically taken away,” Geertsen wrote to The Herald Journal. “If you don’t have a physical address in UT, then you can’t receive a mail-in ballot. This would mean having to vote at a physical polling place. And for disabled people who are rural or homeless, there are often barriers to transportation.”

It’s a similar struggle for Native Americans, according to Alina Begay, who face issues receiving mail-in ballots or traveling far distances to reach the polls. But many of the issues on ballots affect Native American Utahns, and therefore their voices are crucial for better representation.

“I kind of feel like our sovereignty is being threatened a lot,” said the Navajo woman. “I want my people, our people, to know that these things are happening, and that we have a voice and should use our voice. Because our ancestors weren’t allowed to have that voice.”

Liquin added, one voice, one vote, really can make a difference. She and Begay both spoke to the need for translators to be available at polls for citizens who don’t speak English as a first language to ensure each voice in the state is heard.