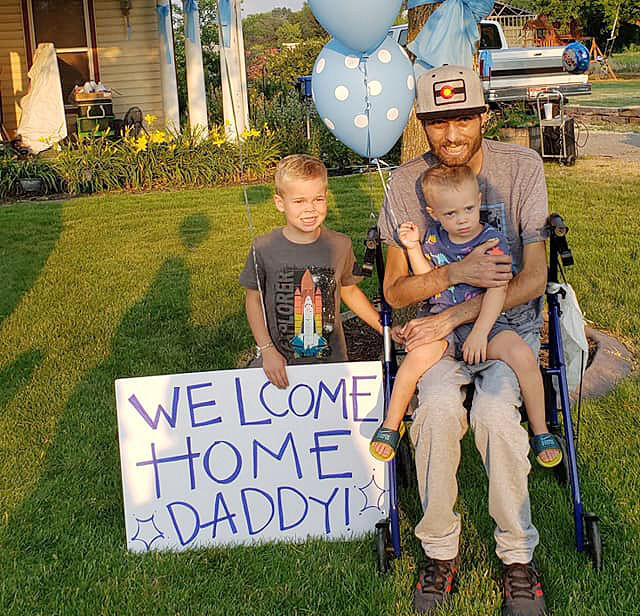 Liver transplant patient Luke Rigby is welcomed home by his sons, 6-year-old Bennett and 2-year-old Noah, after returning to Newton on Wednesday after a six-month stay in Colorado. 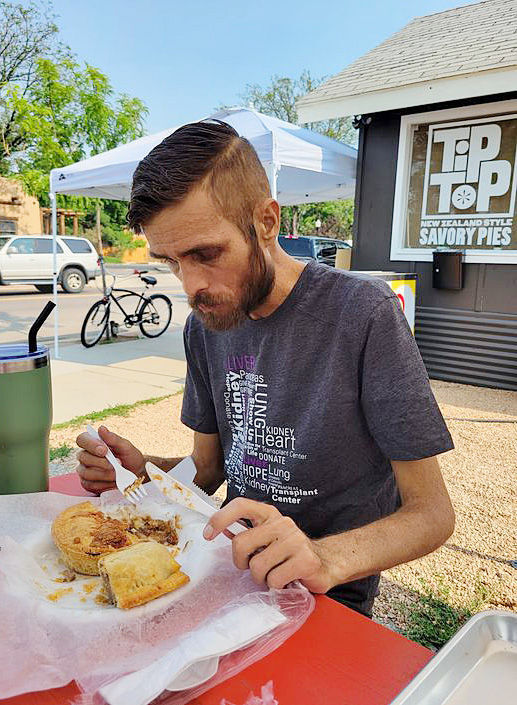 Luke Rigby is shown getting some needed nourishment in this photo shared online by his family.

Liver transplant patient Luke Rigby is welcomed home by his sons, 6-year-old Bennett and 2-year-old Noah, after returning to Newton on Wednesday after a six-month stay in Colorado.

Luke Rigby is shown getting some needed nourishment in this photo shared online by his family.

A Facebook page chronicling the medical odyssey of Newton native Luke Rigby has 1,396 followers, so when the 35-year-old father of two offered thanks to his supporters this week, he was touching a lot of bases.

“I appreciate everyone’s thoughts and prayers,” he told The Herald Journal in a brief phone call Thursday after arriving home from a four-month hospital stay in Colorado. “It’s been a rough road, but I’ve had tons of support and made it through. And miracles happen.”

The miraculous occurrence Rigby is talking about has been his recovery from a third liver transplant after his doctor at one point offered only a 10% chance of survival.

That grim prognosis came when Rigby was experiencing multiple organ failures this spring following his second transplant in just 13 days. But week by week he slowly improved, eventually moving from ICU to a recovery unit to rehab, then spending two weeks with his parents in a Denver hotel while he went in for daily checkups.

“He ended up on every floor in the hospital,” said Luke’s mother, Diane Rigby, who, with her husband, Mark, stayed in Denver for her son’s medical procedures and recovery and is now taking care of him at the family’s Newton home.

“He needs care, so I’m his caregiver right now. He’s frail. He’s tired. The main thing is we have to keep him nourished because he’s so skinny.”

Luke has a condition known as primary sclerosing cholangitis, or PSC, that damages the bile ducts both inside and outside the liver.

His first transplant in 2013 involved a partial liver donated by another young man from Newton, Tim Bennett, for whom Rigby later named his first son. The organ served him well until early this year when renewed malfunctioning landed him back in the hospital.

Rigby traveled to Denver six months ago in anticipation of receiving a new donor organ, and a new liver became available in early April. The surgery at the University of Colorado Hospital appeared successful, but the organ developed a blood clot, and a second liver was transplanted just 13 days later.

A highlight of the homecoming was Luke’s reunion with sons Noah, 2, and Bennett, 5. He’d been in contact with the boys regularly by phone, but the long hugs they shared with their dad showed how much they missed each other.

The impact of the prolonged separation was particularly noticeable with Noah.

“Yeah, I’d video call them a lot, and my youngest would actually take the phone and not let anybody have it. He’d just run around with the phone,” Luke said. “They actually called me one week just after I’d left, and my 2-year-old just laid on the floor and was just looking at the phone. He would not let anybody else take it.”

Among Wednesday’s welcoming party was Natalie Phillips, a family friend who helped with a fundraiser in April dubbed “Lights for Luke.” The event involved sale of blue porch lights that neighbors could display to show support. More than 150 were purchased and put out in Newton and nearby Weston, Idaho, where another family friend, Erin Woodward, championed the cause.

The Rigby family caravan entered Cache Valley through Logan Canyon, and Luke described the return to familiar surroundings as an uplifting experience.

“Just coming into the valley, it was great,” he said.