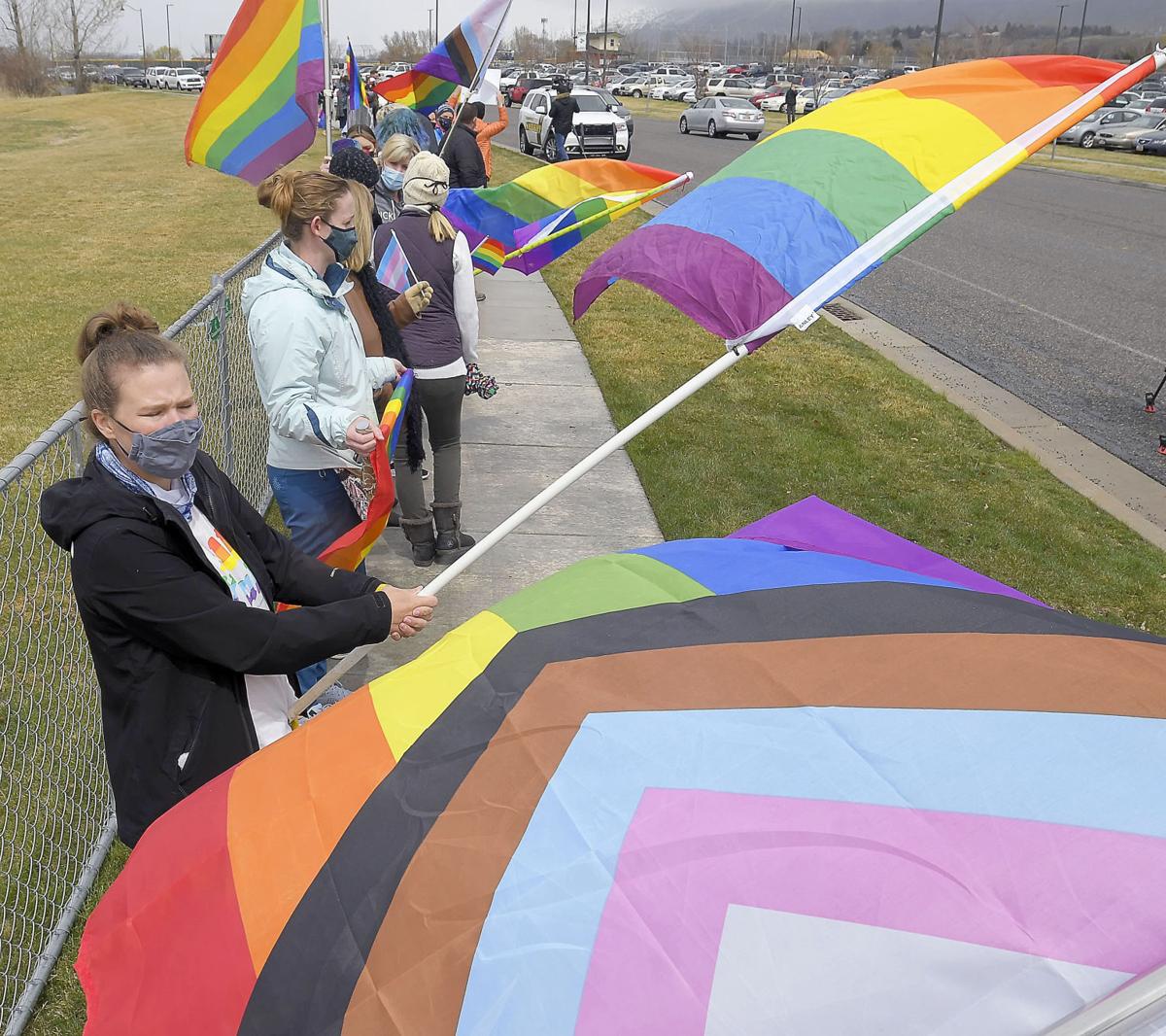 Anya Rushing waves a pride flag during a rally outside of Ridgeline High School on Wednesday. 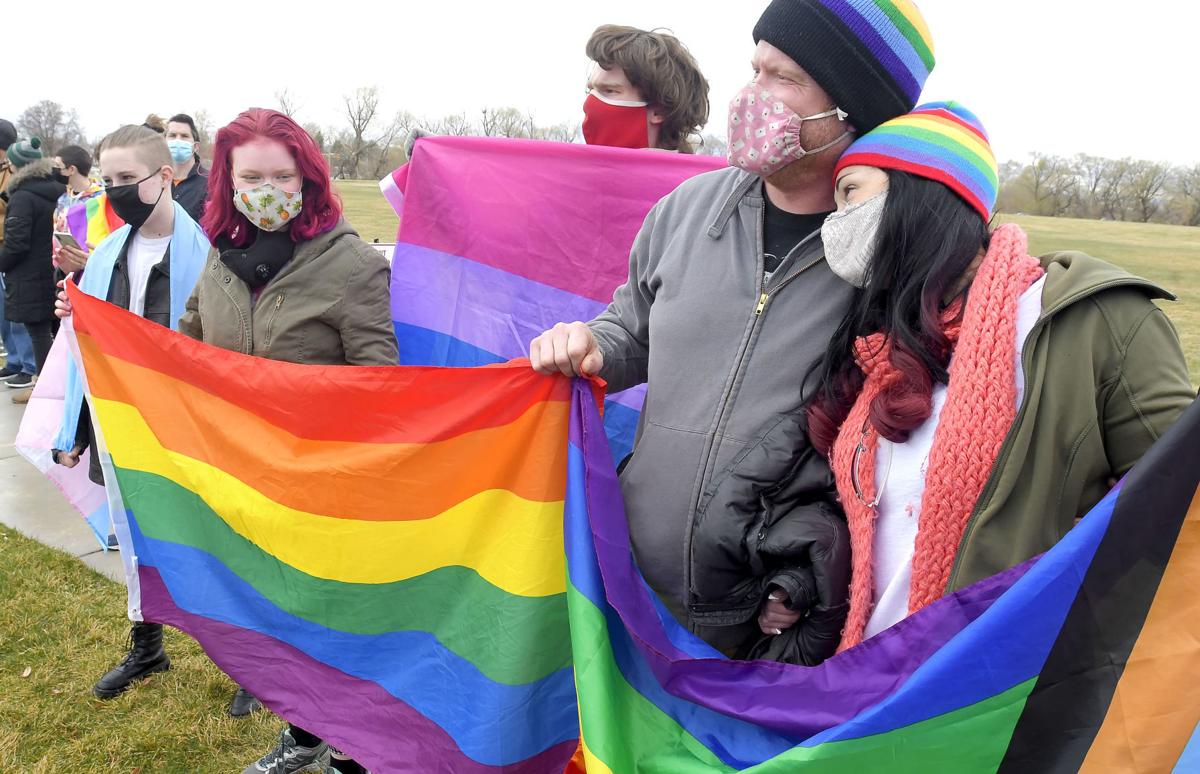 Members of the Olsen and Thorell family hold pride flags at rally outside of Ridgeline High School on Wednesday.

Anya Rushing waves a pride flag during a rally outside of Ridgeline High School on Wednesday.

Members of the Olsen and Thorell family hold pride flags at rally outside of Ridgeline High School on Wednesday.

Although there were loud cheers when a student cut down a Pride flag at Ridgeline High School on Tuesday, a pro-LGBTQ rally outside the school Wednesday faced no vocal opposition.

About 75 parents and supporters gathered in a designated area near the Millville school’s north doors as classes were being let out for the day. Many demonstrators carried rainbow flags similar to the one shown on several widely circulated videos being cut down in the school commons area the day before, but none of the students leaving in their cars or on foot Wednesday offered anything but support for the crowd.

Spencer Wilkinson, a Ridgeline freshman who took one of the videos and identifies as sexually fluid, didn’t go to school on Wednesday because of safety fears but attended the rally with a parent.

“Frankly I don’t feel safe being here right now,” Wilkinson said. “But I think that it’s really important that I am here to show support for myself and my fellow students.”

What Wilkinson’s camera captured has now been seen all over Utah and beyond. The video shows a young man on an elevated walkway in the Ridgeline commons area, below which were hanging a wide variety of flags, including the “Progress Flag” adopted as a symbol by the LGBTQ community. He used a pair of scissors to cut down the rainbow-striped flag, and a large crowd of students below him erupted in cheers when the flag fell to the ground.

The incident has generated a firestorm of controversy online, with viewers arguing over and questioning several elements in the various videos. Among the points of contention is the existence of a second banner behind the LBGTQ flag that has been identified as the national flag of Cuba, and some observers have argued the student’s action was justified to rectify a slight against Cuba perpetrated by LGBTQ students at the school.

Ridgeline Principal Brittany Foster told The Herald Journal on Wednesday that a teacher actually put up the Pride flag and the story behind its placement is much more complicated than any casual observers could know.

The idea to fill the commons area with flags was generated by a committee that organized this week’s Diversity Week activities at the school, and committee members decided some time ago to use an LGBTQ flag in the display along with the flags of several nations.

“Unfortunately, the flag we originally planned to use didn’t work out, so we had to order a new one, and it didn’t arrive until Tuesday,” Foster said. “By then all the other flags had been placed, so there wasn’t really a spot for it.”

Foster said in conjunction with a Diversity Week assembly on Tuesday, the school’s Gay-Straight Alliance had invited LGBTQ students from two other high schools to attend an after-school event, and they and their advisor felt it was important to have the new Pride flag up for visiting students to see.

“That’s when the decision was made to quickly hang the flag even though there wasn’t a spot for it, and so the teacher ran out and hurried and put it up,” Foster said. “Unfortunately, she made a decision to put it up over another flag since she didn’t have scissors to cut the other one down and move it, and so she left the pride flag hanging over the Cuban flag.”

The teacher then got busy with something else and forgot to finish the job.

According to several people interviewed by The Herald Journal, students throughout the day were involved in a back-and-forth demonstration involving the flag. First someone would flip the rainbow flag over the railing and out of the way of the Cuban flag, then someone else would flip it back. The cutting incident caught on video came just after one of those exchanges.

The student who cut down the flag was reportedly not at school the following day, and Foster said he will face “some consequences” for his action, but she declined to say what those will be, citing privacy reasons.

The Pride flag, meanwhile, has been rehung in a different section of the commons area along with all of the other Diversity Week flags, out of students’ reach.

“From there, they put up everyone’s flag, no one was covering any one other (flag), and there were still kids threatening to take it and rip it down and burn it and trash it,” said one GSA member who spoke on condition of anonymity. “So that was really worrying today.”

That student said the incident had several in the school’s LGBTQ community feeling unsafe on Wednesday.

{div}”I know many parents didn’t want their kids going to school today,” they said. “And many people of the community (were) coming to school and not feeling safe being there. At some points today it was like that for me, and I didn’t attend those classes. For the majority, I attended, but I’m not excited for it tomorrow.”{/div}

{div}The student said they don’t blame Ridgeline teachers or administration for the incident, but rather appreciates that they were trying to do something new and supportive of the LGBTQ community.{/div}

{div}“I think the worst part about it is our student body and the way they have reacted,” the student said. “And I feel a need for parents to have a sit-down with our kids, because it’s not at all the school’s fault.”{/div}

After the videos went viral, some Ridgeline students urged LGBTQ sympathizers to go to school in their “Sunday best” as a way of showing support, while parents and other community members organized the outdoor demonstration.

Several Cache County Sheriff’s deputies were on hand to direct traffic and keep protesters off of school property and in a designated area announced ahead of time on the Sheriff’s Office Facebook page.

Among the demonstrators was Darren Parry, former chairman of the Northwestern Band of the Shoshone who ran for the U.S. House of Representatives last year as the Democratic nominee in the First Congressional District.

“I’m here because of my Native American grandmother,” Parry said. “She told me that our communities are only as strong as our most vulnerable individuals. So I’m just here to support them. I’m not angry. I’m just kind of sad. … I live in Providence and I go to church with these kids, and this is disheartening to me.”

Another demonstrator, school parent Valerie Steadman, said she came on behalf of her daughter, Hailey, who was upset by what she saw online.

“She wore her favorite, most beautiful dress and came to just say ‘Hey, I love you’ to her fellow students,” said Steadman, describing her daughter as a straight, white member of The Church of Jesus Christ of Latter-day Saints. “We need to show all of the love that we can. It’s a hard time to be alive, there are a lot of divisions, but we don’t want any more divisions. We want love for everyone, we want connectivity, we want support, we want encouragement for all of the best things that we can bring to this world.”

Principal Foster said the idea of Diversity Week was hatched by a committee formed in response to a some disturbing behaviors witnessed at the school.

“The purpose of the committee is to make our school a bit more inclusive because we’ve had some concerns come up specifically this year, but other years as well, that there was maybe a need to be more culturally sensitive,” she said.

Foster said the onslaught of negative community reaction over the flag incident has been tough on her and her staff.

“It’s really difficult … especially when what was meant to be a week of celebrating our students and celebrating the differences has now become somewhat of a negative for our students. And instead of having the effect of having them feel welcome, specifically our LBGTQ community, that didn’t happen,” she said.

The principal stressed, however, that the actions of a few should not be seen as representative of Ridgeline’s school culture.

“We have many caring, loving and supportive students and faculty at Ridgeline. There were many students that reached out immediately after the event to express concern, love, and support,” Foster said.

The Cache County School District issued a statement addressing the recent events, concluding on the note: “This type of incident reminds us of the importance of continually educating students, not just during a Diversity Week, on the importance of respecting one another and the right to attend school, participate in events, and learn in a safe and respectful school environment.”

District spokesman Tim Smith said he hopes something positive will result from the controversy.

“These types of incidents are always helpful to further educate students,” Smith said. “It’s an unfortunate event, but also we can make lemonade out of lemons.”