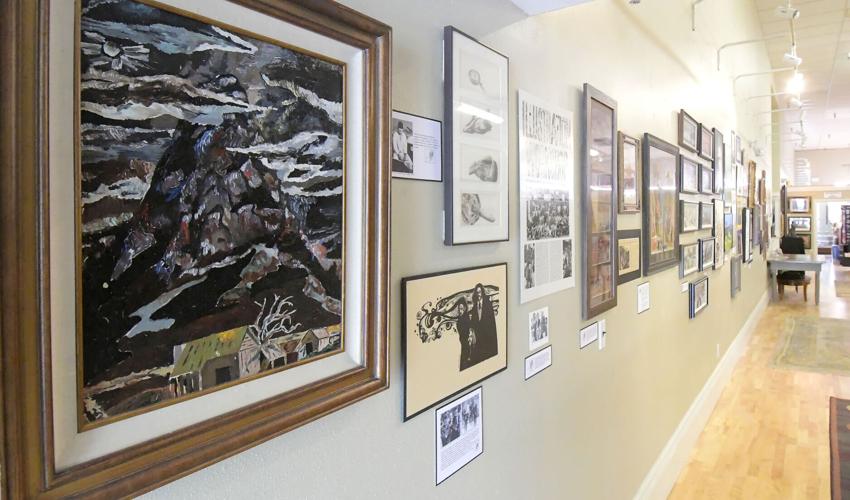 A gallery of Glen Edwards artwork is on display at the Logan Fine Art Gallery, including this piece that he did while in high school. 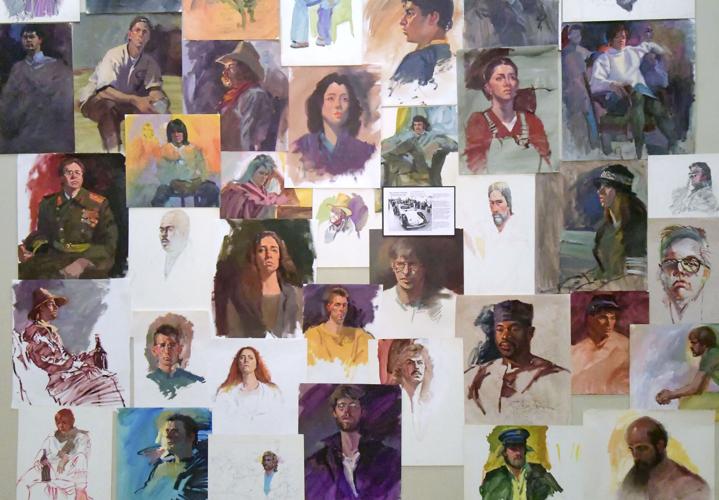 A series of portraits painted by Glen Edwards are on display at the Logan Fine Art Gallery.

A gallery of Glen Edwards artwork is on display at the Logan Fine Art Gallery, including this piece that he did while in high school.

A series of portraits painted by Glen Edwards are on display at the Logan Fine Art Gallery.

A new retrospective of the late Cache Valley artist Glen Edwards opened Friday at the Logan Fine Art Gallery, kicking off with an event where family, friends and former students reminisced about his art, teaching and life.

“He had such a great career and he meant so much to a lot of the really great artists in the valley,” gallery director Kristen Swenson said.

Central to the event was Barbara Summers Edwards, Glen’s wife, who shared a number of glowing stories remembering him as an artist, husband and teacher.

“Let me just say that I have great confidence that I’m a great artist. But I want you to know that Glen Edwards was a genius. He was a genius artist. He did things I can’t do, and it was my greatest joy and love to see that happen and to help where I could,” she said. “We would work every day together and I loved it. I loved it.”

The Preston-born artist taught at Utah State University for 32 years, retiring in 2000 to paint full-time, passing away at the age of 83 in 2019. A widely recognized and award-winning painter, he originally graduated from USU with a graphic design degree, pivoting to a master’s in illustration after finding he hated working in his original career, according to Barbara.

The evening’s speakers touched on nearly all aspects of Glen’s work — his use of color, brush strokes, motion and more — as well as his teaching style, simultaneously encouraging and demanding, believing anyone could be a great artist, but only with true commitment.

“There were times I would be sitting there in his class, looking at someone’s work on the wall, and in my mind I’m going ‘Oh my goodness. That is terrible. How in the world, what in the world is he gonna say about that?’” Barbara said. “And he would give honest critiques, he would, but the thing I loved the most is he would always find at least one good thing in that painting to comment on so that that person would not get discouraged. He truly believed that he could teach anybody to draw and paint if they were willing to put in the work.”

Some of Glen’s most iconic work included western scenes and landscapes, often featuring a person, horse or other creature valiantly making their way through a body of water, a scenario Swenson said he had a unique talent for.

“With Glen, his very vibrant colors that he is able to put into his paintings really make him very unique and it has a lot to do with his illustration background,” she said. “He is able to capture movement like no one I’ve ever seen. Movement in water — water is probably my favorite of his.”

Scott Bushman, a local artist, spoke about Edwards’ willingness to teach, even after retirement.

“The last time I talked to him, we had a group of artists here; they asked if he would come and do a demo. He had been sick, he was tired, he said, ‘Absolutely.’ I said, ‘How much would you charge?’ ‘Oh, nothing.’ He came, he spent a couple of hours with us. We just watched in awe as he did a portrait, talked about it, talked about his technique, got up, and left,” Bushman said. “Glen was good news, and I’ll never forget him.”

The retrospective, put on as part of a monthly artist exhibition at the gallery, features a timeline of his life and career through his work, starting with his first-ever oil painting from his high school years.

“That thing is just like, are you kidding me? He did that and that was his very first painting, first experience with oil paint? Oh my goodness, it’s just fantastic,” Barbara said.

Through his teaching, Glen developed an impressive artistic progeny, seemingly influencing every other artist that passed through the valley during his time at USU and beyond.

“He was so amazing as a teacher,” Swenson said. “He was able to teach so well to all of these artists, and show them that they can be anything that they want to be — he really meant a lot to everyone.”

Barbara told the audience at the event the feeling was mutual.

Swenson, who developed the idea of the retrospective with some of Glen’s former colleagues, got in contact with Barbara in order to bring it to life. After Barbara created the timeline of Glen’s career, she brought it into the gallery, where Swenson got to work building the exhibit.

Many of the paintings, Swenson said, have never before been displayed in public. Barbara spoke about the effort of uncovering and organizing the artist’s prolific work, crediting her son Charlie as being integral to uncovering and organizing so many of Glen’s paintings. In the final months of Glen’s life, Charlie worked through his father’s vast body of work to find unsigned or untitled illustrations and paintings in order to add context and credit.

“Without him most of these paintings wouldn’t be displayed,” Barbara said.

During the event, an audience member asked Barbara about what made Glen a genius.

“I have a drawing, and I’ve tried to find it so I could put it in this show. It’s a drawing he did with a brush, and it’s a portrait,” she said. “It’s hard to describe to a non-artist, I apologize. It’s a stroke with that brush that you just look at and go, ‘I don’t know very many people that could do that’ — and he could.”

Barbara said she’s currently about a third of the way through photographing all of Glen’s pieces, with 600 still to go.

“There are times that those strokes bring me to tears, they’re so beautiful,” she said.

In addition to an opportunity to once again showcase Glen’s work to the community, the gallery and Friday’s event also served as a chance for those who knew the artist to connect over their shared love and admiration for him. Barbara ended the night thanking those who came.

“It’ll be three years in August that Glen passed; it’s been hard. I am a very content hermit, kind of always have been, so it’s easy for me to kind of withdraw within myself and just be very content in the studio, and people don’t let me do that, and so I appreciate your support and friendship. And I just love you guys, so thank you,” Barbara said.

The Glen Edwards Retrospective Art Show runs through the end of July at the Logan Fine Art Gallery, 60 W. 100 North in Logan. Glen and Barbara Edwards’ work can also be found at their website, edwardsfineartstudio.com.