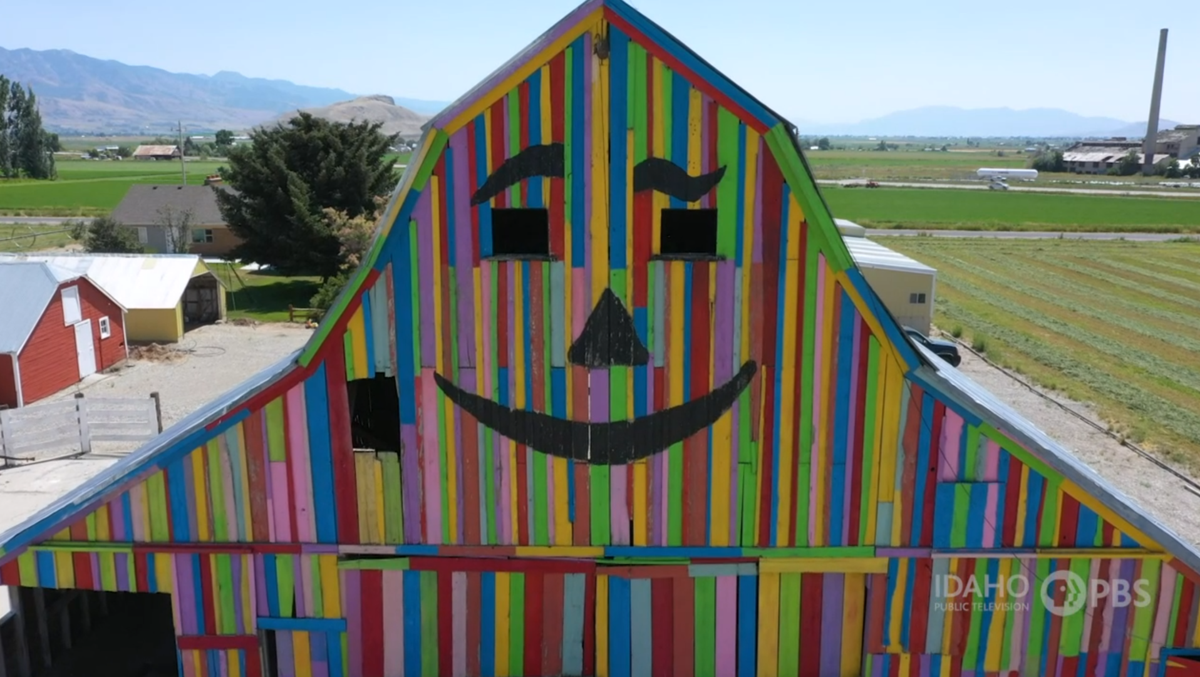 A smile greets visitors of the Whitney Cemetery from the late Linden Beckstead’s barn. 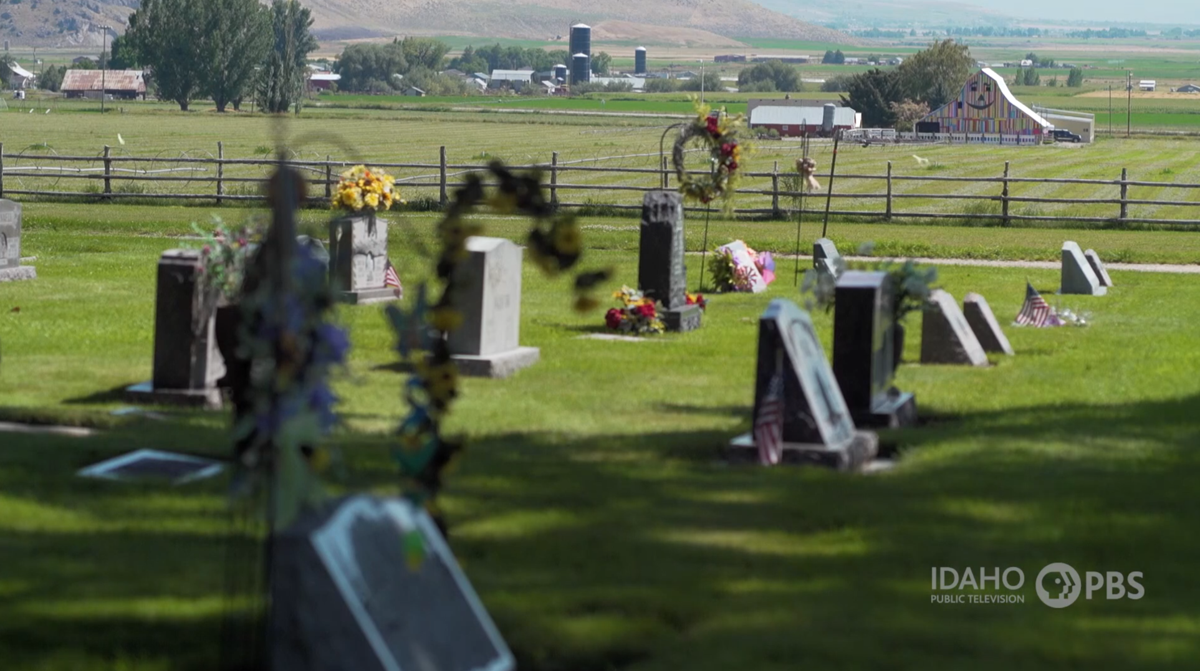 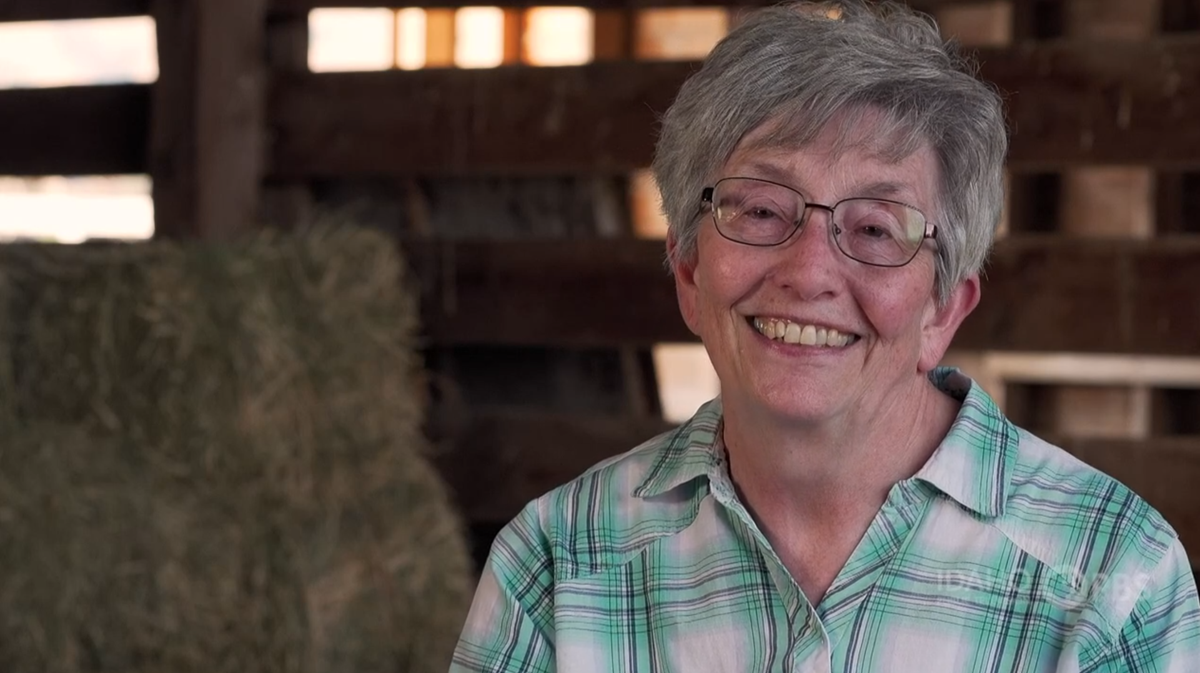 Myrna Fuller, who wrote a book on local barns, directed the film maker to area barns.

A smile greets visitors of the Whitney Cemetery from the late Linden Beckstead’s barn.

Myrna Fuller, who wrote a book on local barns, directed the film maker to area barns.

The colorful smile on the north face of the late Linden Beckstead’s barn in Whitney just grinned at a statewide audience. The 110-year-old structure is featured in a half-hour PBS Outdoor Idaho program, “Barns of Idaho.”

The program was written, filmed and edited by Forrest Burger, an Oregon native with a long career in video journalism who now works as the Outdoor Idaho editor for Idaho Public Television in Boise. He said the idea for the program grew out of a lifelong love of barns.

When his boss said, “Now what?” after Burger’s “Living with Wildfire” aired in 2019 on Outdoor Idaho, Burger suggested his dream and found the support he needed to get it done. In his research, he discovered Myrna Fuller, who published a guide to Franklin County barns in conjunction with the “Barn Again! Celebrating an American Icon” traveling exhibit from the Smithsonian Institute in Washington DC that exhibited at the Larsen-Sant Library in 2006. She agreed to help him get the footage and interviews he was looking for.

“A barn is iconic. It just draws the stories out of people,” states Nancy Terrell of Buhl in the film. That is true of the “smiley face” barn. Fuller told Burger she had a barn he needed to see and when he did, “Oh, my gosh. I started laughing,” he recalls.

“None of the Becksteads were available that weekend so I had to do the interview,” Fuller said.

In the film, she tells how the smiley face came to be as the result of the many pranks its former owner liked to play on friends and neighbors.

In 1989, Linden Beckstead was serving as bishop of the Whitney Ward of The Church of Jesus Christ of Latter-day Saints. One weekend while he and his wife were out of town, neighbors decided to turn his jokes back on him. Hansen Glass and Paint furnished the paint and members of the ward created the colorful grin.

When Beckstead returned, he wasn’t amused, but it was done in the spirit of love and fun, and the smile grew on him. The family has preserved this now-iconic barn by the Whitney Cemetery since that joke. The barn is now owned by Beckstead’s granddaughter, Tess, and her husband, Lance Zollinger.

“It’s a Whitney landmark. Everyone knows the barn, and it’s fun that people know of it,” Tess said. “It’s fun to be here with all the memories I have from growing up and making new memories with my own children.” She and her husband plan to give their children opportunities to raise animals in that barn.

While in Franklin County this past August, Burger also spent one day filming and interviewing Landon Wheeler, son of Carl and Karen Lindhardt Wheeler of Thatcher, about the family’s green-trimmed white barn on U.S. Highway 91 on the north end of Preston. Burger said he hopes to include that interview in an hourlong version of the show he hopes to have done in March for the station’s fundraising drive.

Barns have “welcomed new life, put food on the table and kept families whole. … Maybe you have heard the phrase, ‘The barn builds the house.’ Some have suggested that the barn built the state.”

The program can be found at Idahoptv.org by scrolling down to “Outdoor Idaho,” then “Barns of Idaho.” The Preston segment is about 20 minutes in.

That a cameraman and reporter for CNN would hold such a passion for these buildings of the past caught Fuller’s attention. But Burger discovered his is a passion shared by lots of people.

{div}”It’s amazing how many barn stories there are out there. Every farm has a barn and every barn has a story,” he said.{/div}

{div}But they are falling to subdivisions, so capturing them has become a mission for some, such as a photographer featured in the program. {/div}

{div}”When my boss put (the program) out on our Facebook page we had 55,000 likes in a couple days. It was kind of incredible, the response we got,” he said.{/div}

{div}From those responses came a segment in this program and one on a Sears and Roebuck kit barn he hopes to include in the hourlong program as well.{/div}

{div}Another interesting aspect of the film is that Burger did most of the work himself, due to the pandemic preventing him from being able to travel with another cameraman to help with the work.{/div}